"Winners don't do different things, they do things differently". You have heard that already, haven't you? You have heard of the Hayabusa already too, I'm guessing. The Hayabusa did do things differently when it first came out - putting on the most ridiculous looking clothing in the name of aerodynamics, pushing engine capacity to a zone that many wouldn't venture into and reaching speeds that no socially responsible soul would ever advertise. The second-generation Hayabusa didn't do different things either - it only pushed the envelope a little bit further and that was enough to keep the motorcycle relevant and revered for over a decade. Now there is a new one. 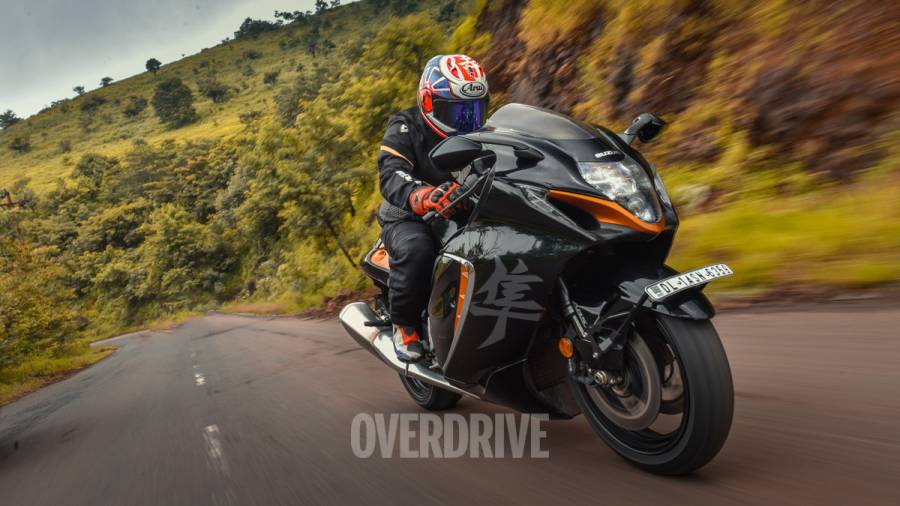 I've personally been on a nostalgia trip ever since the new Hayabusa came for a review. The 'busa was introduced to me as the killer of the Honda CBR1100XX Super Blackbird - a 90s motorcycle I truly love. In fact, it was christened the Hayabusa, the Japanese word for the peregrine falcon, because experts say that these raptors feed on little blackbirds and also because they dive in on their prey at insanely fast speeds. The Blackbird arguably started the race for top speed, giving birth to such hyper bikes, and while Honda quit soon after, Suzuki and Kawasaki played on. In fact Kawasaki needed (or evolved) three motorcycle to hold a candle to the 'busa - the ZX12R, ZX14 and more recently the supercharged H2. Sure, there are many new track bikes that punch out more power and reach higher speeds and quicker, but none have replicated this kind of legacy - not even the Hayabusa's own siblings. 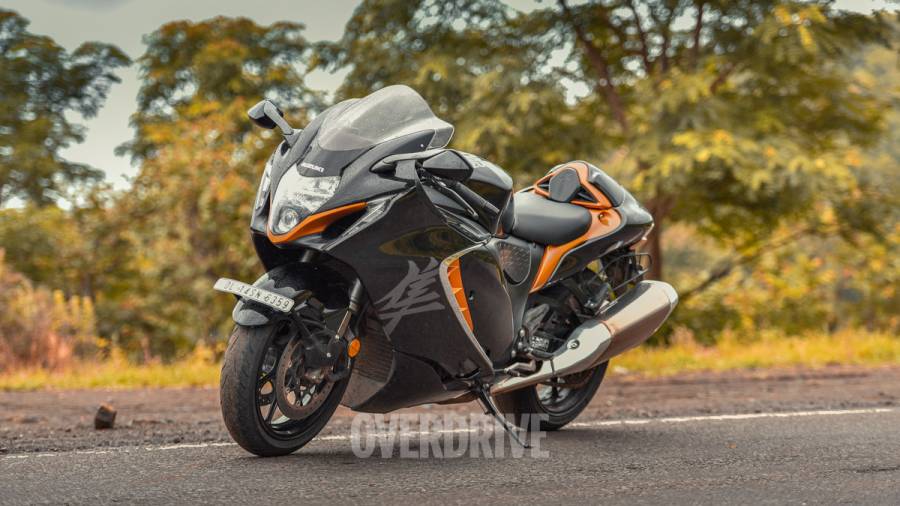 So when the third generation of the 'busa was teased, especially with the bronze accents - a colour that is an ode to the original - the world expected fireworks. But instead, Suzuki passed on to us a reality check that they were themselves greeted with when they set out to develop the new 'busa - it was almost impossible to better the motorcycle that already existed. You see, top speed might have made the Hayabusa famous, but what really makes it a legend are the other things it manages with that speed - reliability, agility and the ability to inspire confidence and instil fear at the same time. 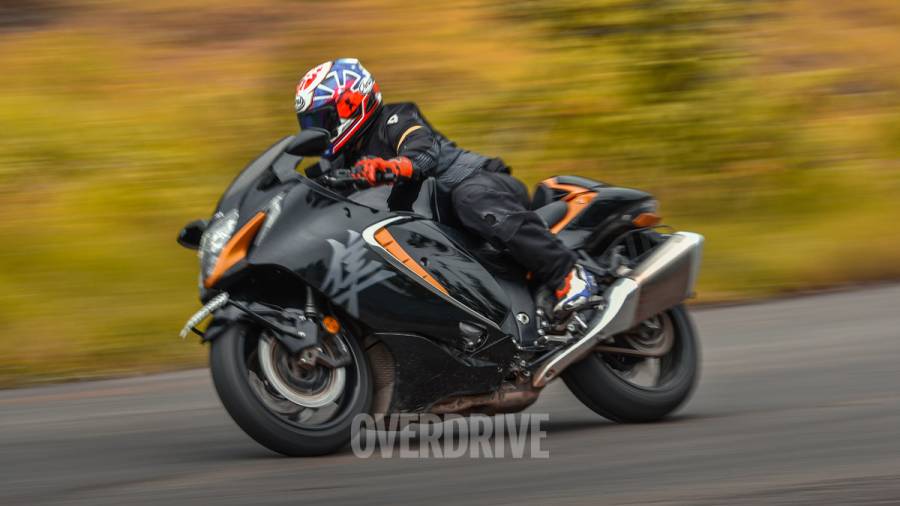 With electronics as sophisticated as a table lamp, the original Hayabusa was all about great engineering and immense power that made riders like me learn about fear, throttle control, body positioning and even tunnel vision. Perhaps the new 'busa with all its electronic nannies will not teach the same way. Because apart from seasoned old-timers, the new 'busa is made for a generation that threatens parents and teachers about child services than learning things the hard way - and arguably, there is nothing wrong about it. 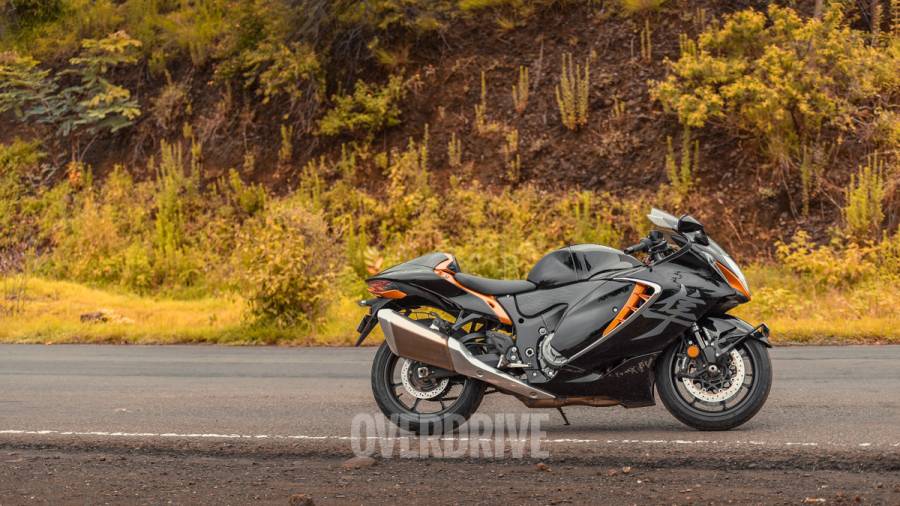 But will this generation of riders choose this new 'busa over other tech-laden alternatives? Will riders in today's times choose a low-slung sport-tourer over practical adventure bikes? Will they accept a bulbous design in the age of wings and spoilers? Will they choose a naturally-aspirated Hayabusa that cannot claim the same numbers as its rivals with forced induction? 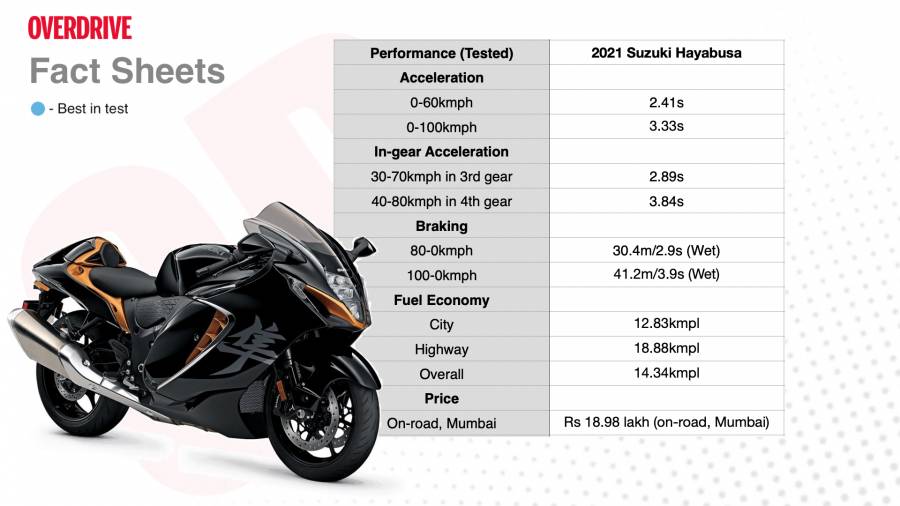 The answer is unsurprisingly affirmative. Batches of 100 Hayabusas are selling out in a matter of minutes the moment they are allocated for India - almost as quickly as gaming consoles and cell phones. So even the generation that has an attention span of 9 minutes, is still attracted to the 'busa despite being relatively "unchanged". And the old-timers are going for it like it's a returning 90s trend. 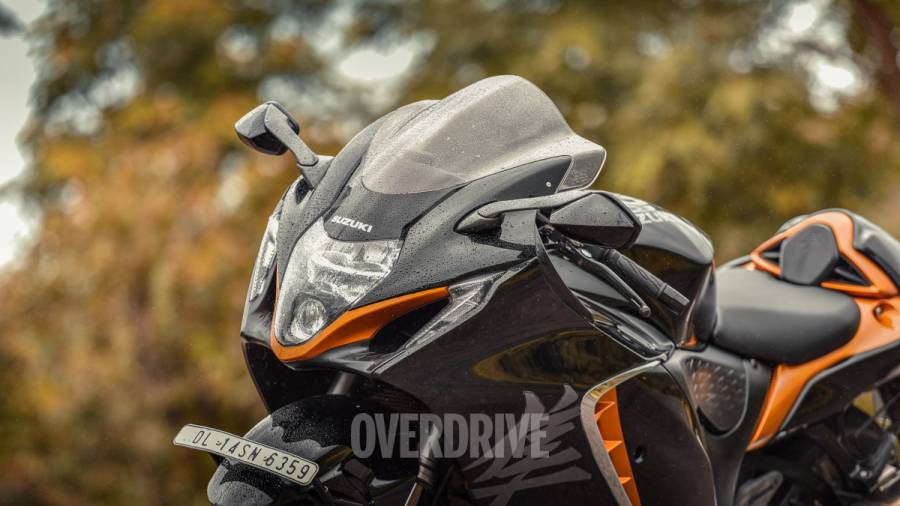 Even in India, some Hayabusas have run for over a lakh kilometres with the engine still going strong. So instead of reinventing an engine for the Hayabusa, Suzuki simply found ways to make the older bullet-proof engine more efficient and cleaner for the times, while new technologies and manufacturing processes have made the engine components stronger for an even higher degree of reliability.

Someone's chances of finding a road and courage to take this motorcycle to its top speed are smaller than the changes made to the Hayabusa's chassis, so realistically speaking the top speed claims don't really matter in the real world. What certainly does matter is acceleration and corner speed, even for a machine that's not built for lap times. 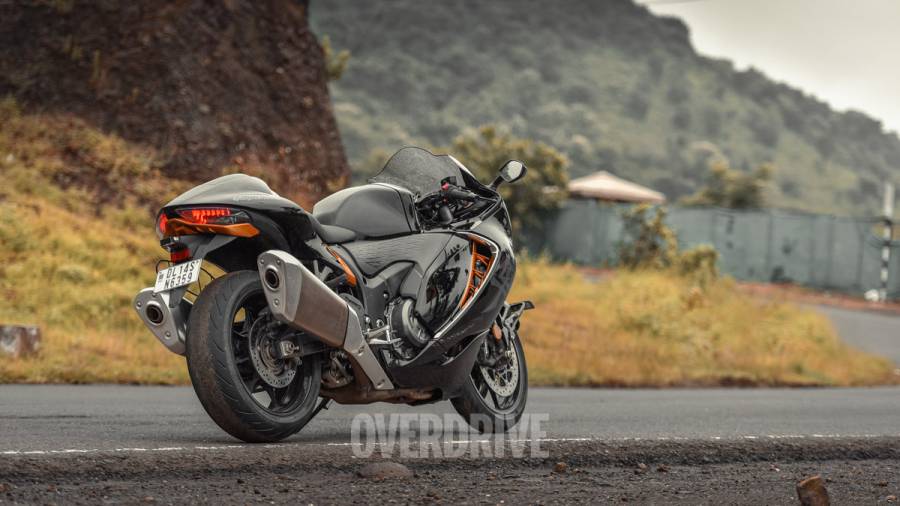 Therefore, Suzuki has concentrated more power and torque around the 5,000-6,000rpm mark for better low and mid-range performance. The engine is butter smooth as you would expect of any modern Suzuki but our test bike had noticeable, buzzy, pedal vibrations when cruising at 5,000-7,000rpm in any of the gears. As before, the big displacement motor makes for superb roll-on acceleration and the 'busa can pull cleanly from 50kmph even in 6th gear. The tractability of this engine is superb in the city as well as on the highway and doesn't need to rev very high to make rapid progress. Traffic jams don't seem to overheat this engine, and while highway cruising was always effortless, the smooth engine, the new cruise control system and the superb stability of the 'busa will allow you to sip on a coffee on the go if you so wish. 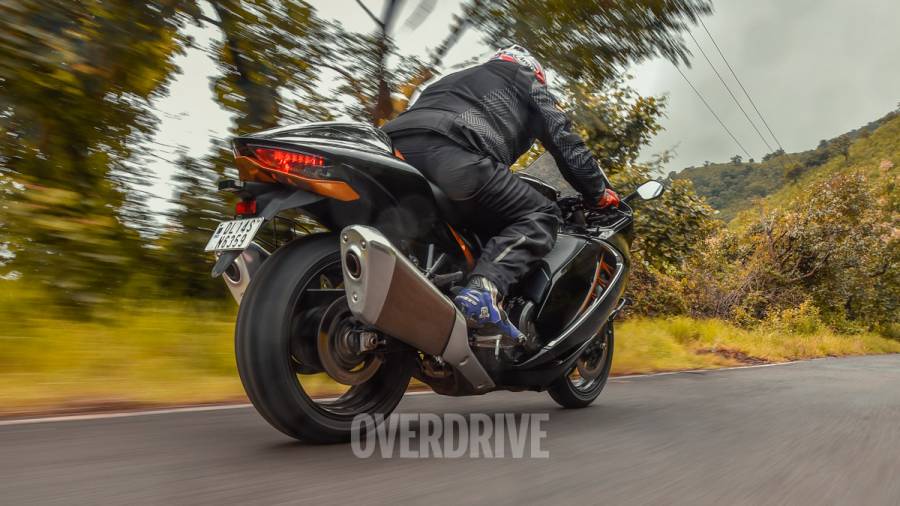 As a part of the new-age electronics suite, Suzuki has also added a launch-control module, the simplest I have ever used - simply hold down the start button with the bike running and you are good to rocket out. You would still have to dump the clutch, but it will lock the revs to 4-, 6- or 8,000rpm for you, depending on the Launch Control mode you choose. The masterful use of the clutch and getting that sub 3.5s 0-100kmph time feels far more rewarding than keeping the throttle pinned on a straight road. And unsurprisingly, this is one of the quickest motorcycles I have ever tested hitting the ton in 3.4s in the wet!

The new-age electronics comprise of a six-axis IMU that does many things that the previous 'busa couldn't - like ensuring that the front wheel doesn't lift frantically under hard acceleration and adding the safety net of a traction control system so that in tricky weather or terrain, the bike doesn't slide away or throw you off.

The previous-gen 'busas were the kind of motorcycles that even made the top braking systems of the time (like the Brembo Monobloc) feel inadequate, but the new one makes good use of the top-drawer Brembo Stylema brakes and drops the anchor with a lot more authority without pushing the big fuel tank into your pelvis. The new callipers brakes and larger rotors, along with the IMU trickery feature a cornering ABS function for improved trail braking. Complementing that further is also a slope dependent control system, which modulates the braking pressure on downhill slopes to reduce rear wheel lift. Both these systems work extremely well and those upgrading from the previous generation model are likely to appreciate them. 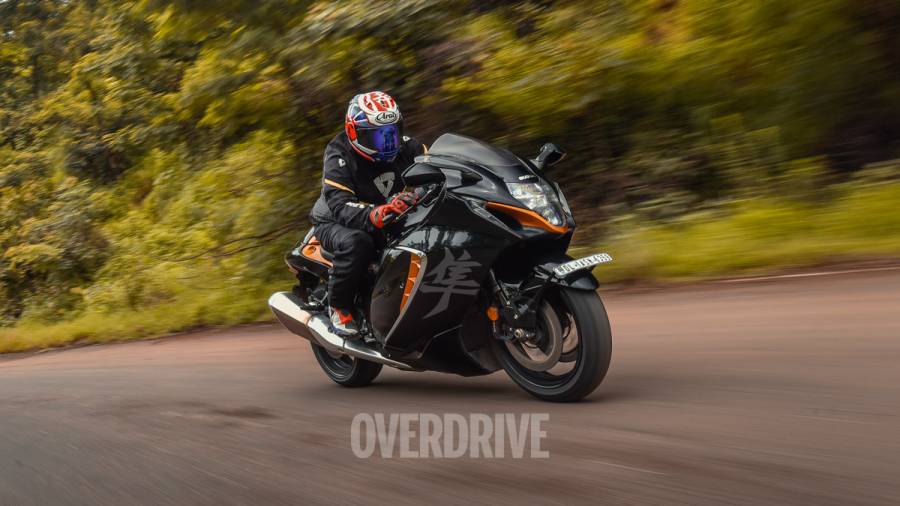 Speaking of slopes, the new 'busa also has the aid of a hill-hold system which will automatically engage the rear brake for 30 seconds if you come to a halt on an incline and this works even when you release the brakes after a firm squeeze. This is a feature I often use on my GS and many adventure bikes when on the trails, but I can see the benefits of it on the heavyweight Hayabusa too. In fact, it is 2 kg lighter than the outgoing model but still in the same ballpark as most big adventure bikes.

But you will be surprised at how all that weight disappears on the go. The chassis is virtually unchanged and continues to feel sublime through the bends. The weight distribution is evidently a 50:50 bias, which always made the Hayabusa agile and easy through the corners. But the new electronics and changes to the engine make it all the quicker through the bends. You will be astonished at how easy the Hayabusa feels to go fast on, despite everything that you see and read on the spec sheet. 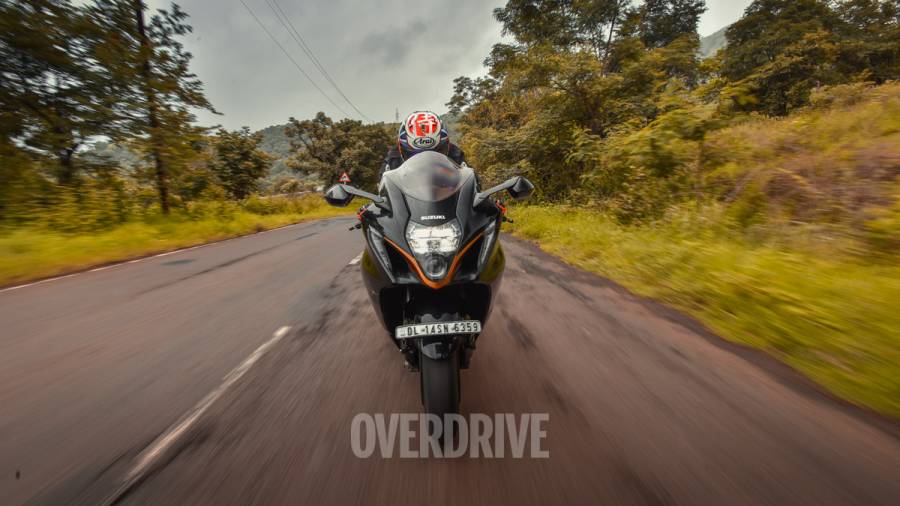 Another small but very important improvement is the suspension, which has the same spec as before, but the internals has been revised for an improved ride. Of course, it's not an adventure bike, but you will be amazed at how effortless it feels over road imperfections. You will also be surprised at how comfortable the saddle and the riding posture are for the rider and the pillion, even on 500 long journeys. And if you are never going to go off the road on your travels, there is no harm in considering the Hayabusa over an adventure bike! 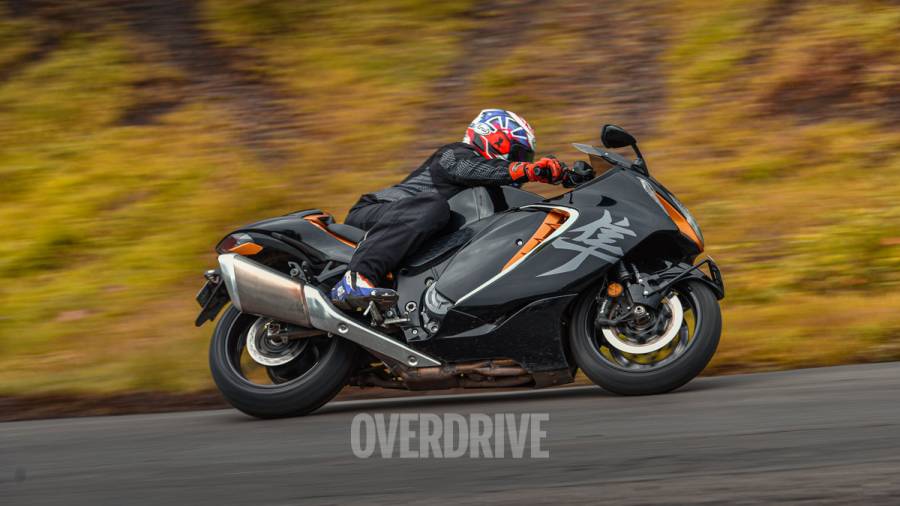 The Bridgestone Hypersport S22 tyres, which impressed us on the Ninja 1000, work well on the 'busa too. They have a slightly wider contact patch, which I believe prevents the bike from tracking and skipping over road imperfections. However, at extreme leans, they will start squirming. The 'busa is known to chew its rubber in around 3-4,000kms and with the advanced traction control and stronger low- and mid-range, I really don't expect the tyre life on the new 'busa to be any longer than before. 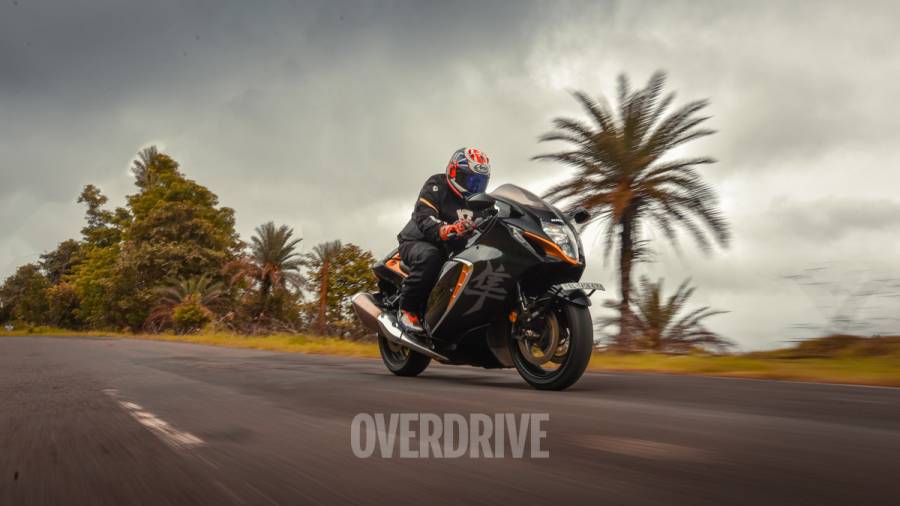 So you see, the new 'busa may not have done different things, but the differences it has made to its engine, chassis and electronics have led to improvements that will keep it relevant for another decade. The sharper design may have many hints of older gixxers from where you are watching, but in the flesh, it is still unmistakably a Hayabusa that's leaner and sharper to go with the times. Sure, they could have done a better job than giving it a Suzuki Burgman butt, and maybe the emergency stoplight safety feature should have been retained for India too - but apart from this nitpicking, the Hayabusa doesn't leave much room for complaint. In fact, the only one I have heard repeatedly is that it doesn't feel very different from the older bike. But realistically speaking, it is actually a good thing and a difficult feat to achieve in today's times of social and ecological responsibilities. So let us all be glad that despite the stricter norms, the legend lives on to teach another generation of riders the true definition of speed.