When the E-Class arrived in India in the late nineties, it was the evergreen W124. Back then you would have to be a world traveller or abreast with the latest auto magazines to know that the first E-Class on sale in India was actually a model conceived in the eighties and arrived here towards the fag end of its lifecycle. Of course, it was still an excellent car and is considered an engineering masterpiece even today. But in today's connected world, carmakers can't pull off selling an older product when it's replacement has been revealed elsewhere. And yet, the W213 E-Class has been one of the top sellers for Mercedes-Benz India even when the facelift was revealed exactly a year ago. So there are two things to take away from this - one is that the E-Class is still a much-loved luxury car in India despite the market's shift towards SUVs and crossovers; and two - the updated E-Class has taken this long to arrive into India (apart from the pandemic, of course) because, remember, India gets the exclusive right-hand-driven, long-wheelbase model of the E-Class. So readying this bespoke model for CKD operations has taken its due course, and now that it's finally here, it's time to see how much has changed. 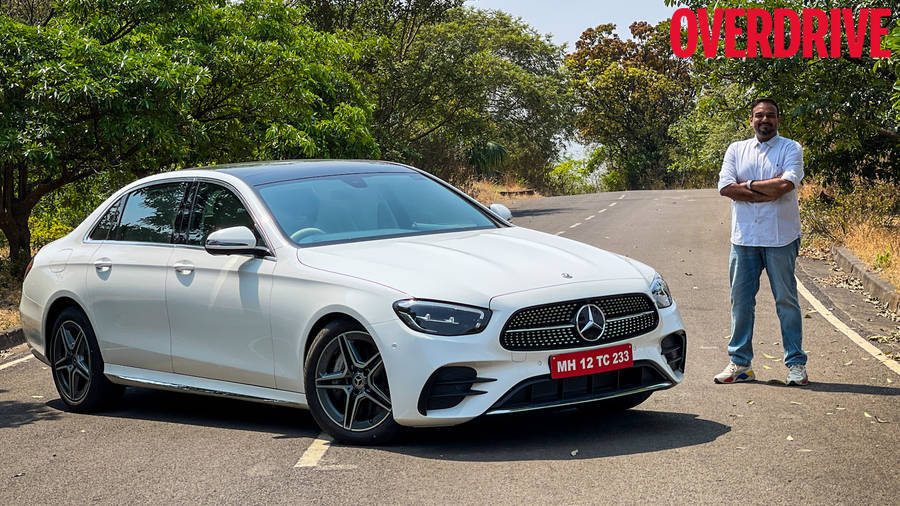 Design
With the previous-generation E-Class (W212) Mercedes-Benz started the trend of giving the E-Class a comprehensive midlife makeover - enough for it to almost pass off as an entirely new model. The W213 follows that tradition. 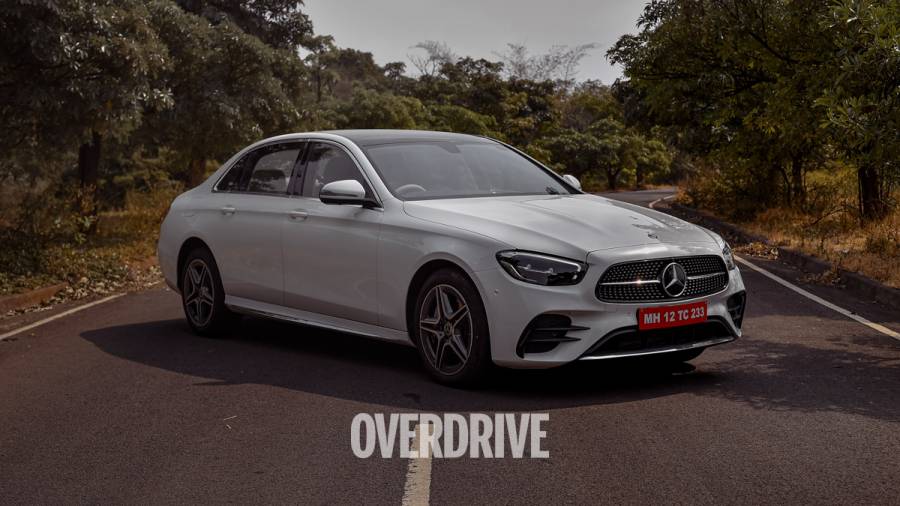 The headlights have gone sleeker and have finer detail. An LED brow and two chrome spots give it a completely new lighting signature on the range-topping E350d seen here, but it doesn't look as distinctive as the twin-slat LED signature of the outgoing E. The taillights have a new horizontal shape and a split design and they lose the older stardust pattern for a segmented one that seems inspired by the S 63 coupé, though these aren't OLEDs. 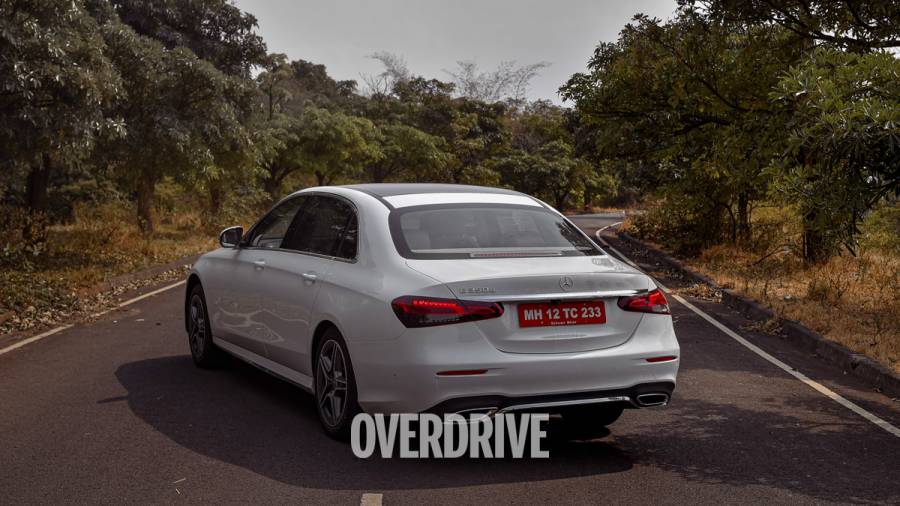 The E-Class still has an elegant, minimalist design devoid of busy lines and creases, which coupled with the long-wheelbase and the sharp ends, gives it a sleek, four-door coupé-like silhouette. It looks particularly good when you pair it with sportier bumpers and the 18-inch wheels that are exclusive to the new AMG line. 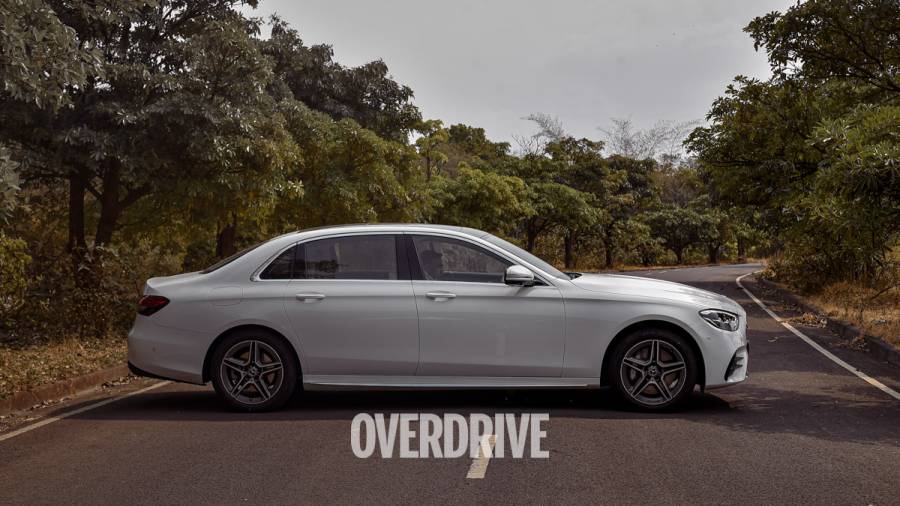 I'm on the fence about the diamond grille though, which looks a bit too mainstream now, or probably it's hard for me to accept an E-Class without a horizontally-slatted grille and an upright three-pointed star placed on the bonnet. If you think like me too, that combination is available on the Exclusive trim which can be had on the E 200 or E 220d. Speaking of the bonnet, the AMG line gets the sportier one with the two bulges that Mercedes-Benz likes to call 'power domes' and well, they do add visual appeal - not so much in the white seen here, but they look stunning in the hyacinth red or the Mojave grey. 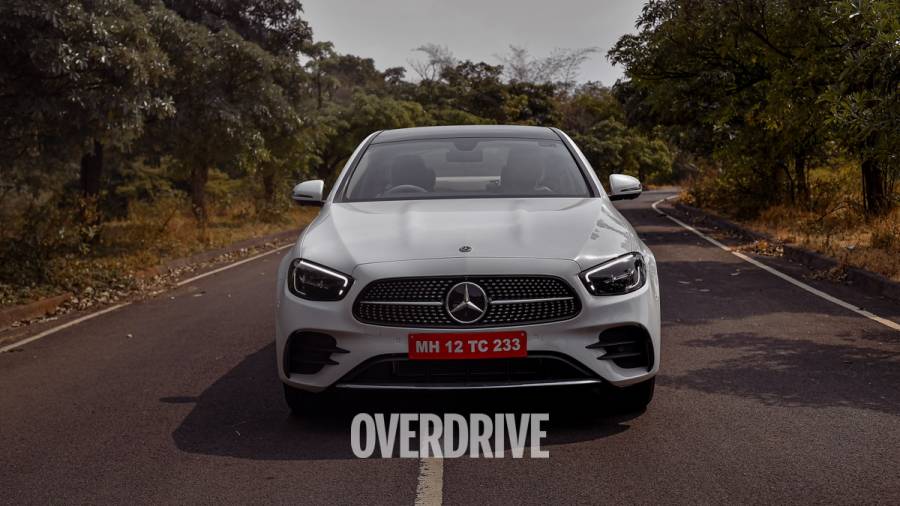 Cabin
With that kind of sporty colours and the AMG Line trim, the new E-Class is targeting those who like to spend time behind the wheel as well, but the rear seat still remains the E-Class' biggest draw. The typical well-travelled clientele of this class is usually aware that the E-Class is one of the most popular taxies in the world, but the India-spec car can hold a candle to the S-Classes and A8s of the world with its rear seat comfort. On this range-topping trim, the generously-sized and pillowed rear seats can be reclined by up to 37° for that almost business-class experience (how much I miss flying!). 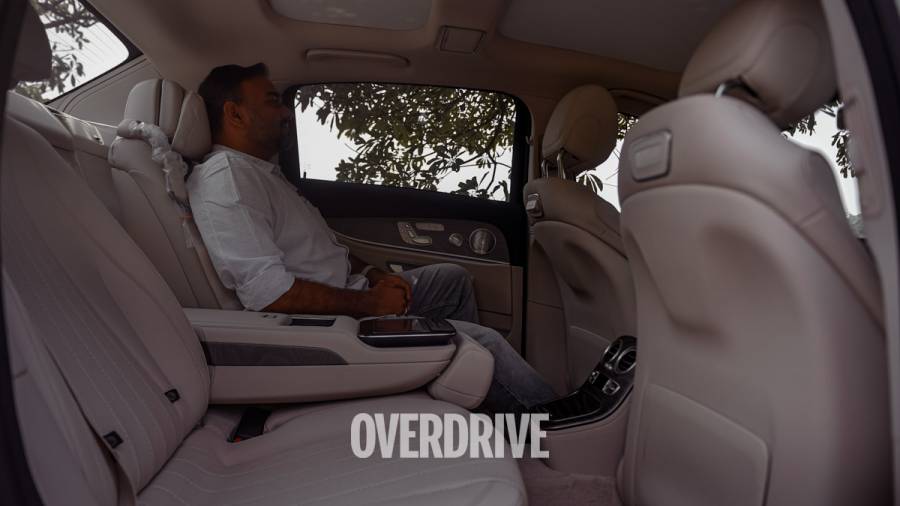 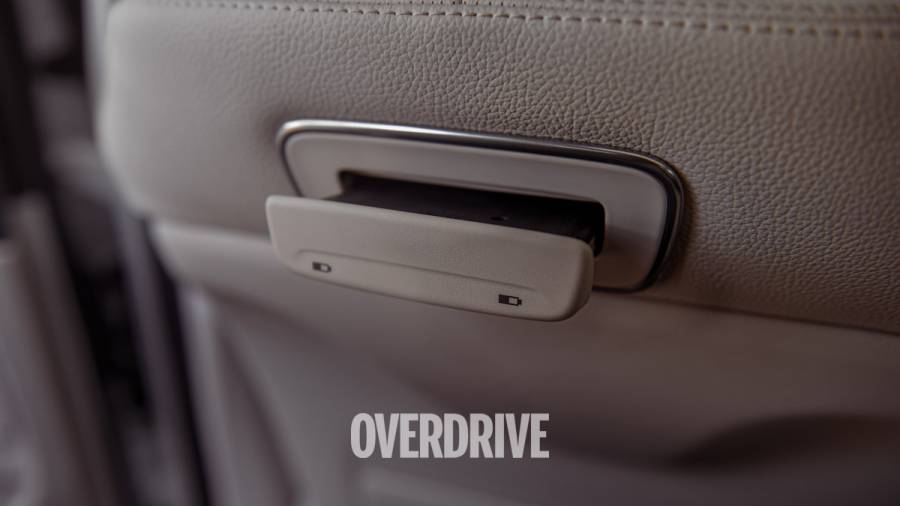 The rear seat gets its own memory functions and climate control and the chauffeur package allows remote control of the front passenger seat from the rear door. Speaking of controls, there is also a touchscreen Samsung Android tablet at the rear which has remote controls for entertainment, the infotainment screen and ambient lighting. There's also an integrated wireless charging pad in the centre armrest. 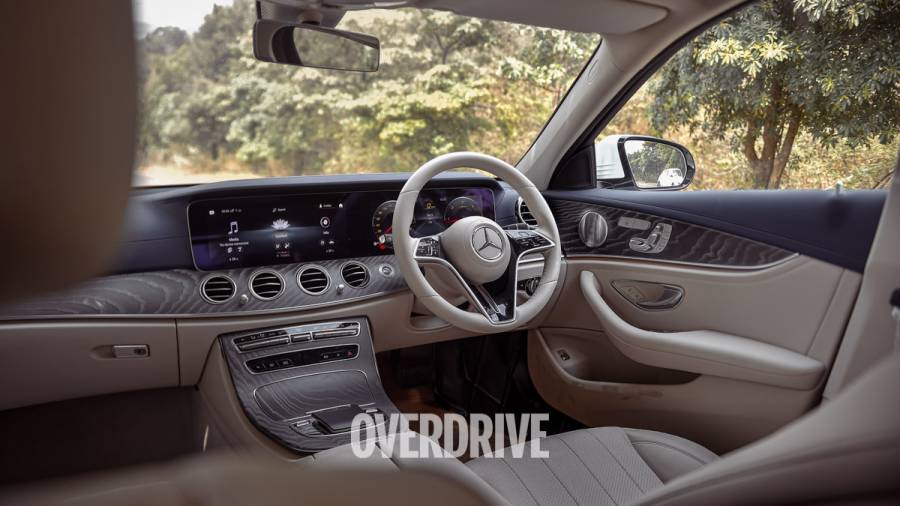 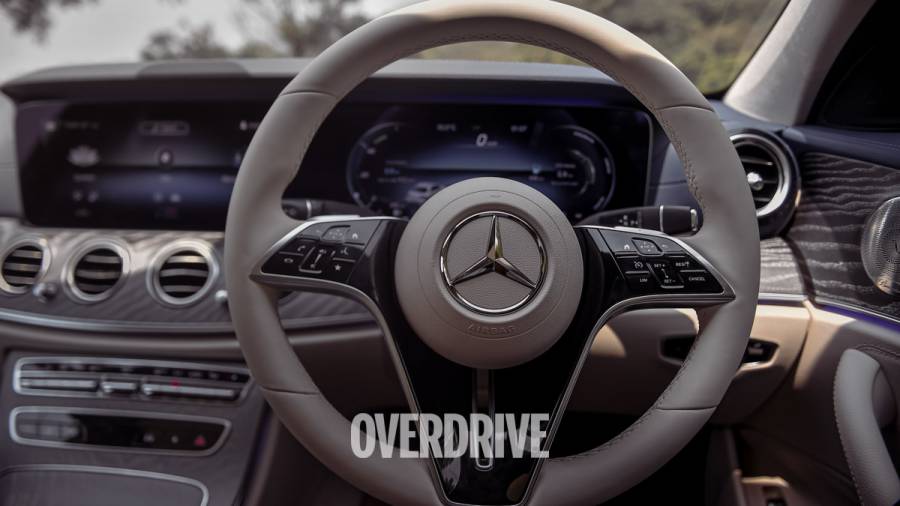 The front end of the cabin feels equally opulent too. While the combination of the white upholstery, blue uppers for the dashboard and door trim, and the grey open-pore wood inserts is all-new for the E-Class, the two 12.3-inch screens draw most of the attention. They now come with the latest MBUX software that gets the 'Hey Mercedes' digital assistant, remote functions for Alexa and Google Home and an integrated SIM with connected tech that allows you to track the vehicle, set a geofence, get service alerts etc. The infotainment is mated to a 590W Burmester audio unit which sounds stunning, no matter which seat you are seated in. 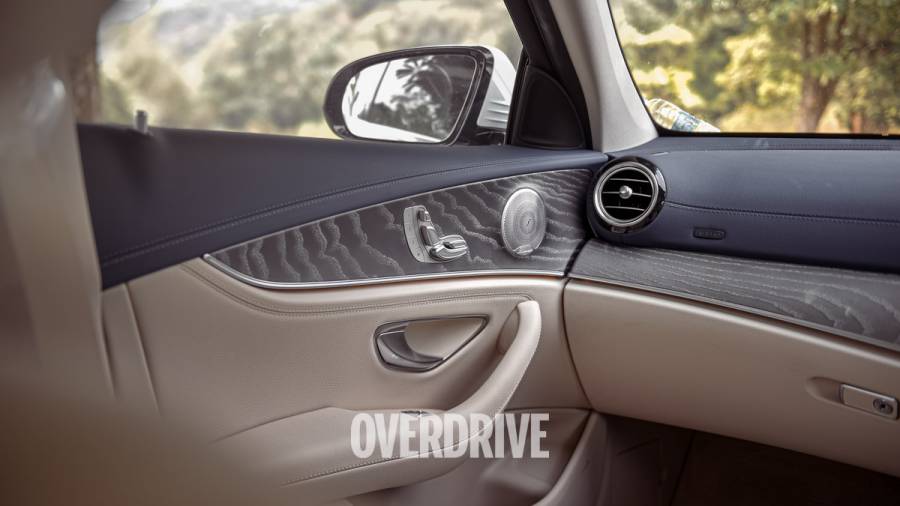 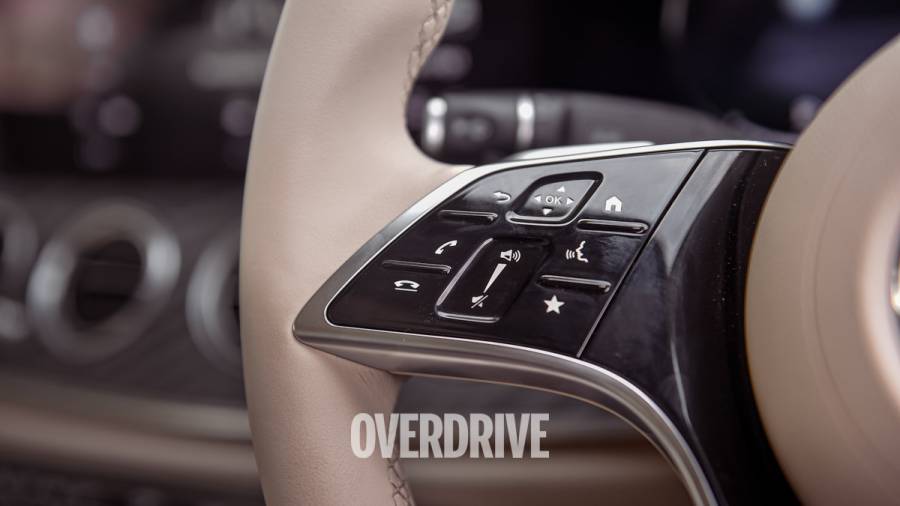 There is a new steering wheel design too which looks refreshing, though I would have liked to see the new AMG wheel with the twin-spoke arrangement for the steering-mounted switchgear. Nevertheless, the controls on the new wheel are as intuitive as before and the new capacitive touchpads for controlling the two screens from the wheel, are noticeably more responsive and accurate than the Blackberry like controls on the previous (and other newer Mercedes-Benz cars) model. That said, I found them to work better with the index finger than the thumb because of the angle at which they reside. 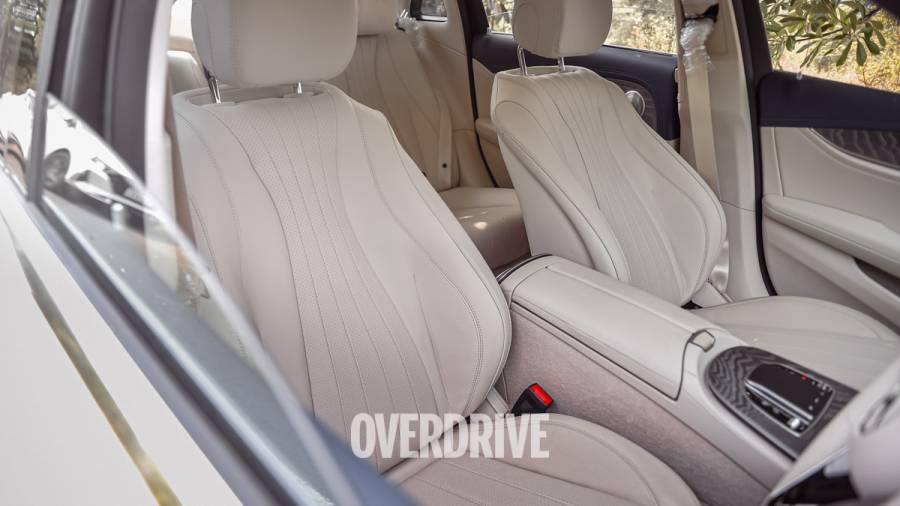 The front seats and wide and accommodating as before, but don't get a massaging function - which would have been great for times when you ask your chauffeur to take the evening off. But what do I appreciate is their Energizing Seat Kinetics function which will make tiny changes to the inclination of the seat cushions and the backrest, which in turn keeps minutely altering your seating posture for reducing strain on the muscles, joints and discs in your back. These movements in the seat are noticeable but never distracting on the drive, and I think it's a great feature for those putting in long hours behind the wheel. 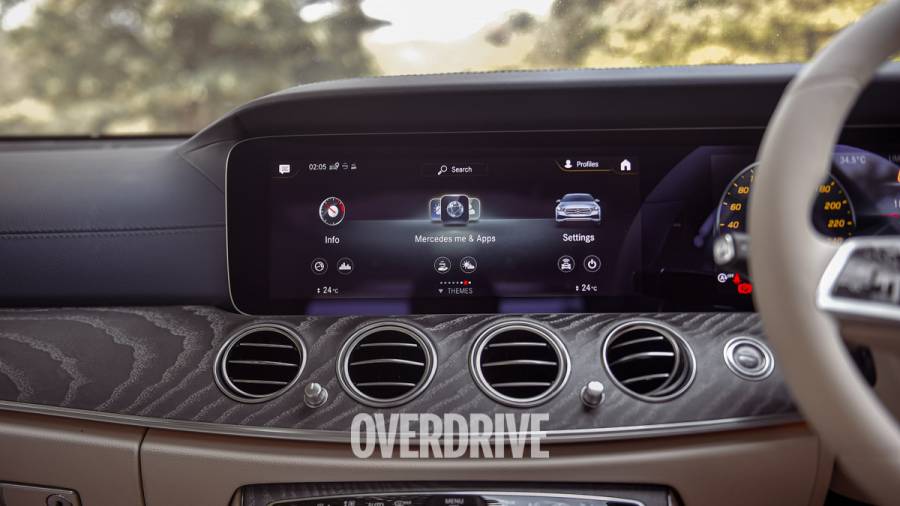 In a nutshell then, whether you are seated at the front or the rear, the new E-Class has an extremely comfortable cabin which is easily in the best in the segment in all respects.

Powertrain and driving dynamics
Even the powertrain choices give the E-Class an upper hand. It carries over the petrol and two diesel options of the outgoing model, meaning you can choose between the E 200 petrol, the E 220 d and the E 350 d. The latter is only available in the AMG Line trim though and justifiably so. The 3.0l six-cylinder in the 350d hardly feels like a diesel, with no gravely clatter entering the cabin - in fact, the overall noise insulation is superb despite the lack of double-glazing on the glasshouse, which is otherwise available globally. There are minute pedal vibrations that are only felt beyond the 3,500rpm mark, but you will seldom need to cross that zone with this oiler. 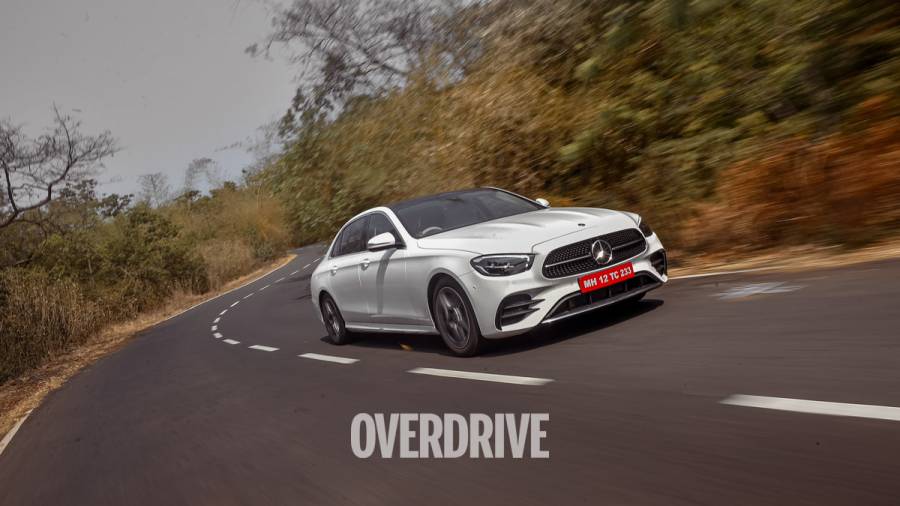 Even on the highway, the engine cruises at 120kmph at an effortless 2,000rpm and while the nine-speed automatic isn't the quickest to downshift, pulling overtakes at city or highway speeds is breezy and never needs the engine to rev high. In fact, this engine has impressed us in the past with its high fuel economy and strong mid-range pull and those facets continue in the new E-Class too. And when you are in the mood, it will sprint from standstill to 100kmph in a little over 6s (6.3s tested), which is exceptionally quick for a car of this order. If you want something a whole lot quicker and manic, the new E 63 S AMG is coming soon. Hopefully, the middle order E 53 could join the party too if Mercedes-Benz India manages to localise the 53 lines of AMGs as they have with the 43s and 35s. 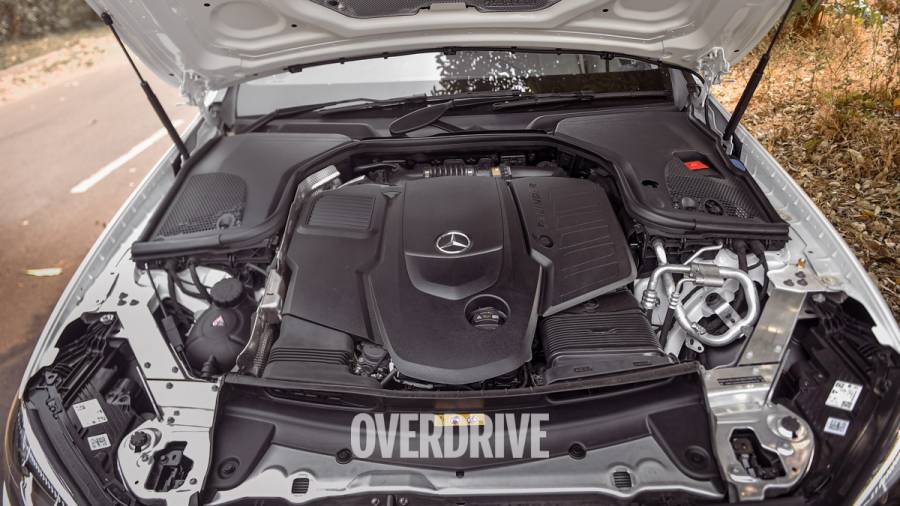 There are multiple driving modes to choose from - Eco, Comfort, Sport and Sport+, which alter powertrain and steering responses on all the variants. But on the E 350d, these modes alter the ride and handling too, thanks to the adaptive air-suspension in all four corners. As before, the difference in these riding modes is noticeable in an instant and it is astonishing how this long-wheelbase car can tackle curves and switchbacks with dignity when you stiffen the chassis with the Sport or Sport+ modes. 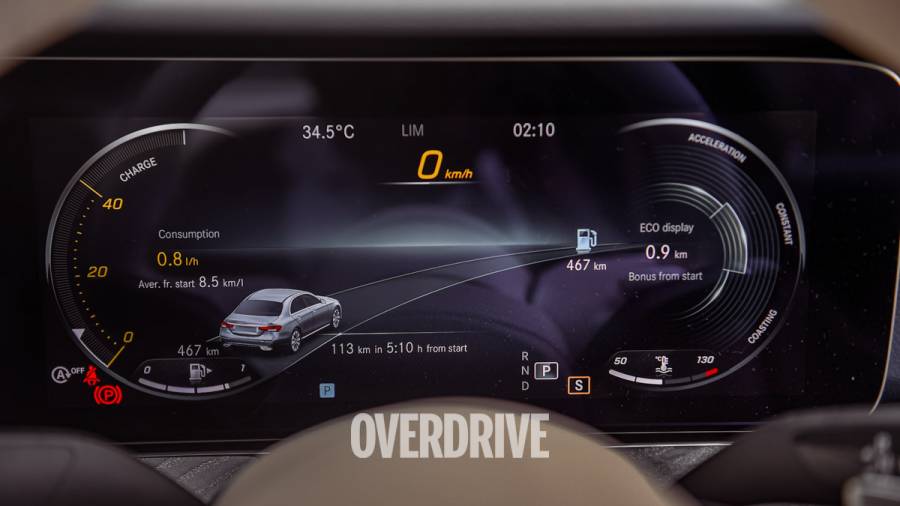 But given the luxury intent of this car and its typical buyer, the E-Class will spend most of its time in the Comfort mode and that's the default setting it starts in. The ride quality in this mode is exceptionally good and even with the 18-inch wheels, it glides over road imperfections without any thudding or crashing, whilst reminding you why the E-Class is such an appreciated luxury sedan even in today's times. 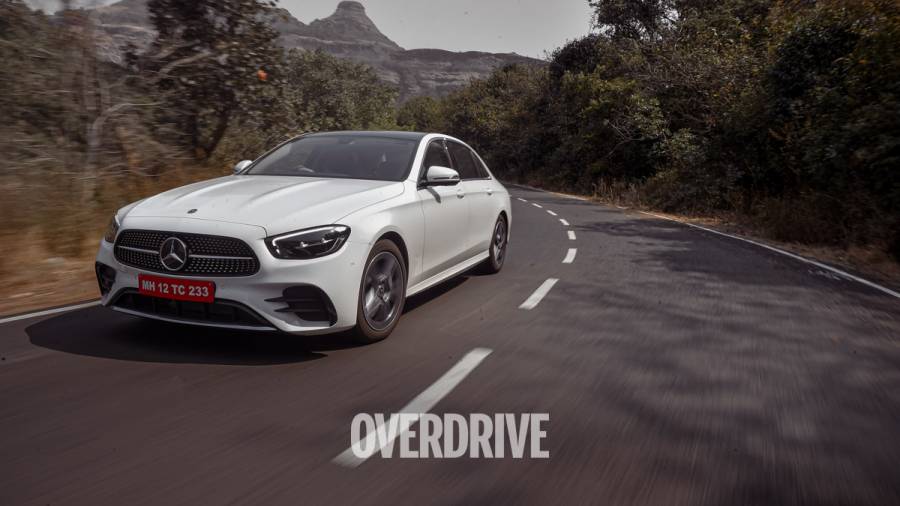 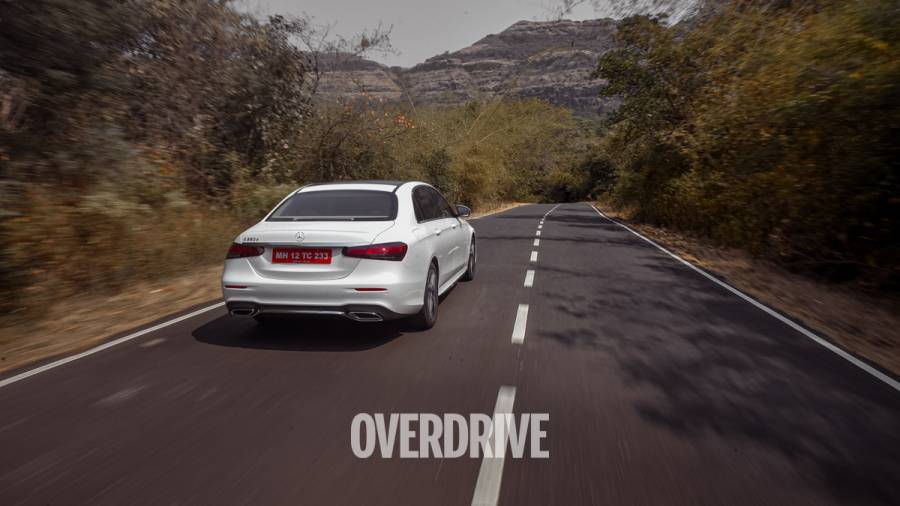 Like the suspension, even the steering and brakes have a nice, damped feel to them. The steering weight changes with the driving modes but never feels over-assisted. The brakes have a progressive bite which makes them predictable, and the sportier modes assist with sharp engine braking too. The E also has the emergency braking assist, and other notable safety tech includes seven airbags and the active bonnet which in case of a pedestrian collision will automatically raise the bonnet upon impact to reduce head injuries. There is also a 360° camera and I like the fact that the front and rear views can turn with the steering wheel to mitigate blind spots. The only tech the car leaves me wanting for is radar-guided cruise control, given just how good the E is to drive - but then again, it's mostly chauffeur-driven. 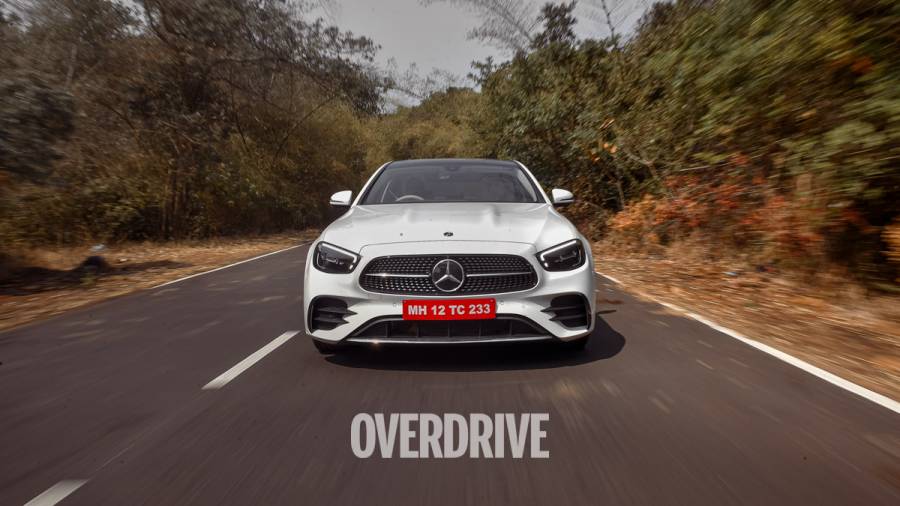 There is a significant price difference between the E 350d and the lower 200/220d variants, meaning that the E 220d is likely to continue being the bestseller. But if you have the means, the E 350d is the variant to buy if you are looking to get the new E-Class. Not only because it has all the bells and whistles that pamper you in the rear seat, but also because it has the engine and chassis that will excite the enthusiast in you when you decide to take to the wheel. From that point of view, it is an all-round package that will continue to put a worry on the competition (and even the current-gen S-Class, for that matter).