If you are an adrenalin junkie, you can trust Ducati to get you a fix of speed and performance and when it comes to the Multistrada, you know that every time there is a new one, it will push the limits of speed and performance in the adventure sport segment. In fact, there is now a new one - the Multistrada V4 - and this one also pushes the limits of technology. 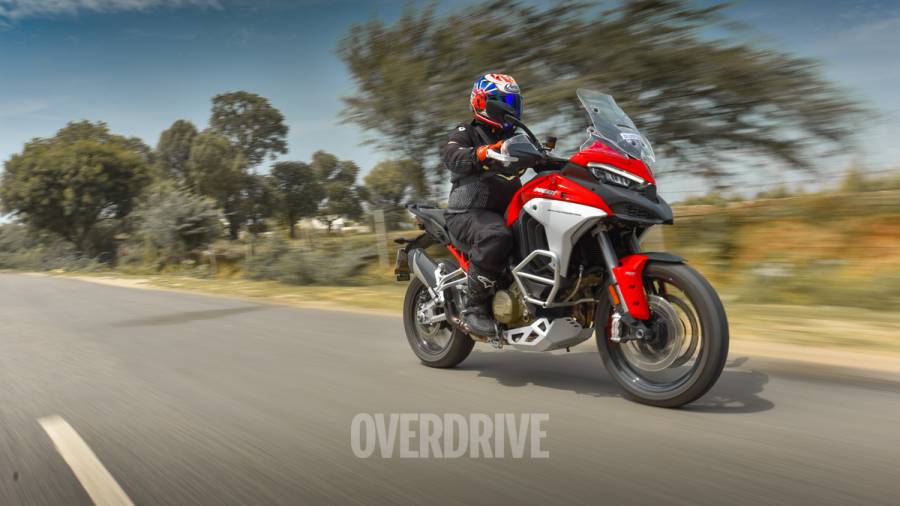 Design
It's every bit a Multistrada no matter what angle you look at it from - there is the sharp beak, the biggest headlamps you will ever see on an adventure bike, a big tank and body panels that almost make it look like a full-faired machine. The pointy tail shows off its sports bike inspiration and promises to be the only thing other tourers will see at least when you are riding on the tarmac. The red colour shouts that it is a Ducati and that it is going to be fast. 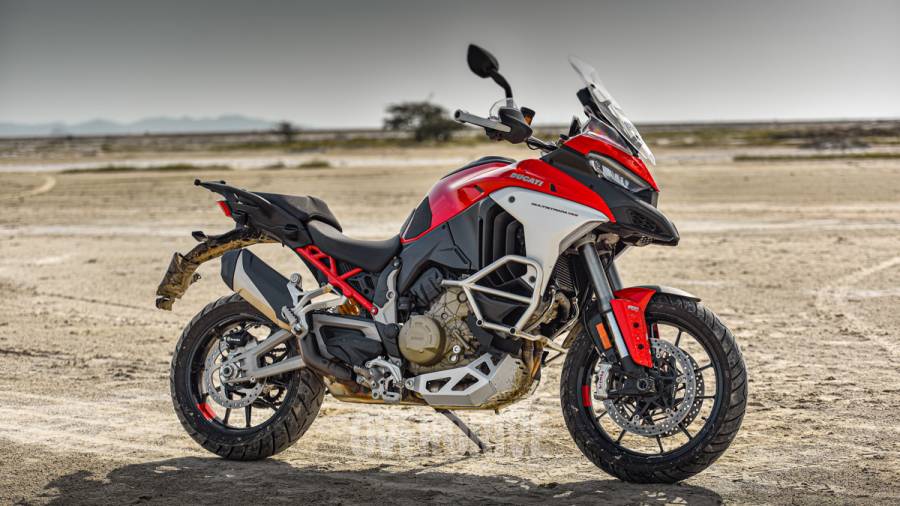 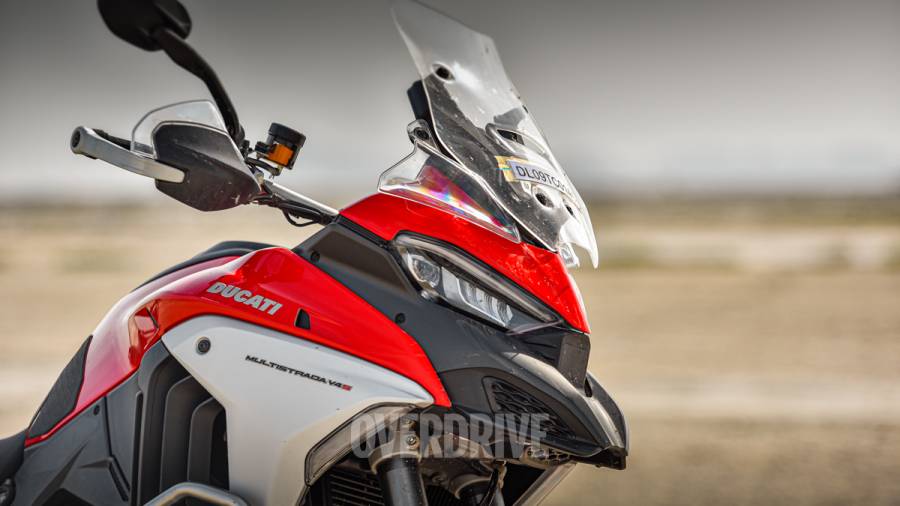 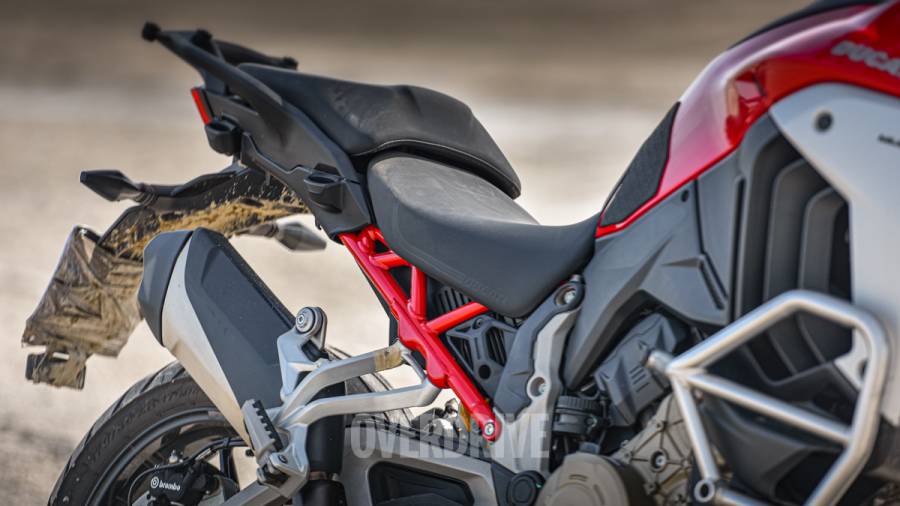 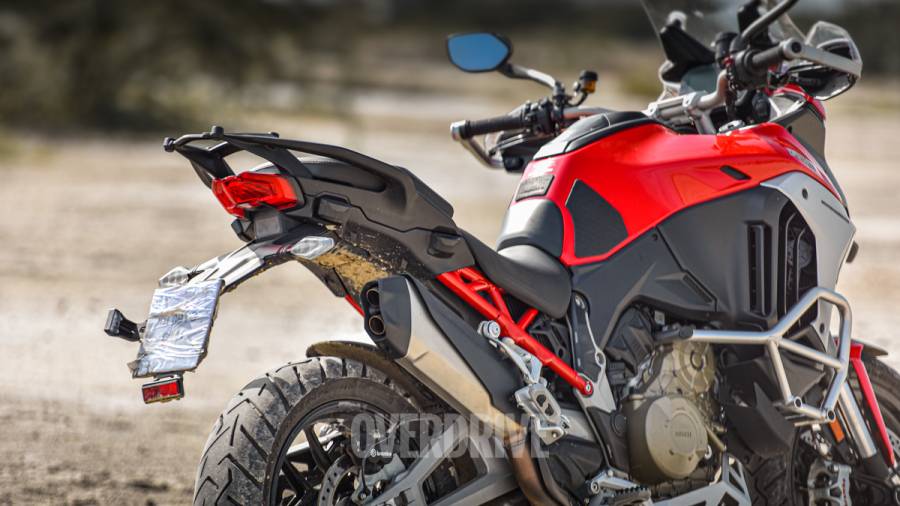 The LED headlights work extremely well, and you will probably be wasting money adding any auxiliary lighting to this machine. But to each his own. The lights also come with a cornering function and that works well too. As for the bodywork, it's all purpose-built - it cuts through the wind like a sportsbike but because you are sitting upright, you will notice a fair bit of wind blast given how easily the MS get up to some really high speeds. One glance at the speedo will tell you that you have strayed way over the legal speeds. 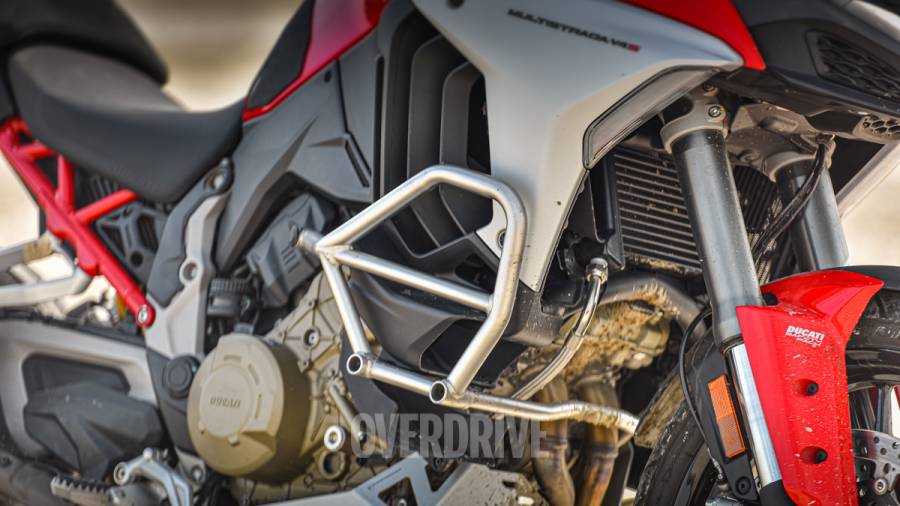 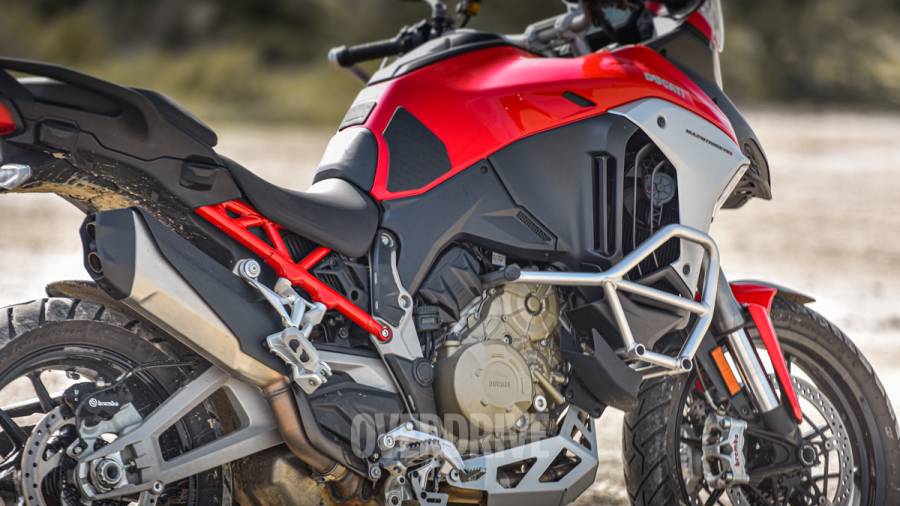 The cuts and creases in the bodywork tell you it was developed in the same wind tunnel as its racing siblings - and the winglets not only help in cutting efficiently through the air at high speeds but also aid in cooling. But the Multistrada still heats up quite a bit. In the warm or hot conditions of Rajasthan where we did this test, the temperature gauge would shoot up beyond 108° in no time - and as before, you feel all the heat under your butt. This is despite the V4 discreetly turning off its rear cylinders at idling speeds to reducing heating. Get going and the four cylinders fire up again with the typical twin-pulse firing order of a Ducati V4, building speed rapidly with a sweet soundtrack - one that will instantly make you forget all that heat.

The engine
All the symphony and excitement comes courtesy of the new Granturismo V4 engine. It takes inspiration from the Panigale in its basic layout, and while the internals is different the intent is very similar. Don't buy the Multistrada if you want to tour in a laid back manner, because while there are riding modes that will dull down the power for that kind of riding, you will be doing injustice to this engine and the motorcycle. The Multistrada is for those who enjoy the thrill of sports bikes but want a more comfortable riding posture to go with it. 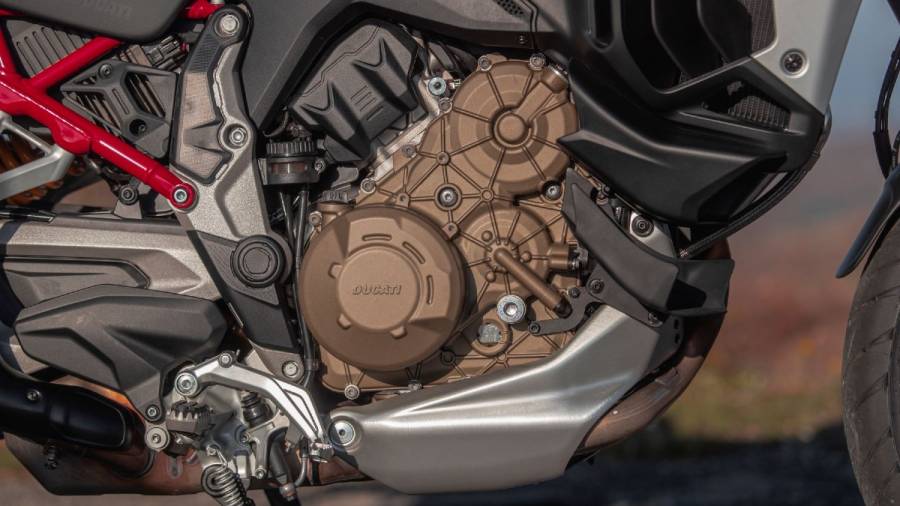 The new V4 is more compact than its sibling in the Panigale V4 and though it is down on torque and displacement over the Multistrada 1260, it makes up for the deficit with more power and extra cylinders. It feels more manic! It also does without the Desmodromic valvetrain and goes with conventional valve springs instead which demand lesser valve clearance checks and have longer service intervals - which is perfect for a touring machine. 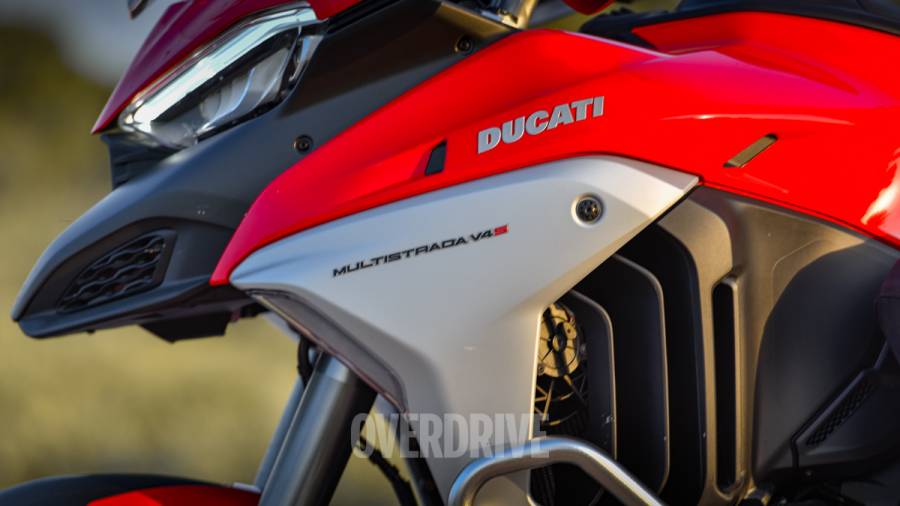 What isn't great for a touring machine, is the fuel economy. Like most BSVI or Euro 5 engines, the new V4 is thirstier, more so with the extra cylinders. Gentle highway cruising at 120kmph returns a fairly decent economy. But if you ride the Multistrada like you would a Ducati, you would be lucky to get a 200km range out of its now larger 22-litre tank. 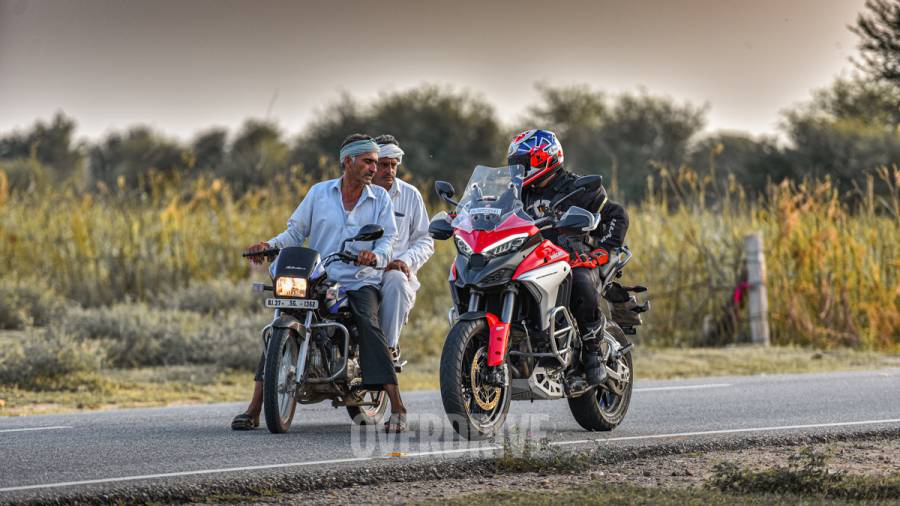 Your answer to the typical "Kitna deti hai?" is usually going to be single-digit

While the fuel economy is below par, the tractability of the engine isn't. It's so flexible that you can be in one gear all day long and still enjoy the city, highway and the twisties like the bike were tailor-made for it. 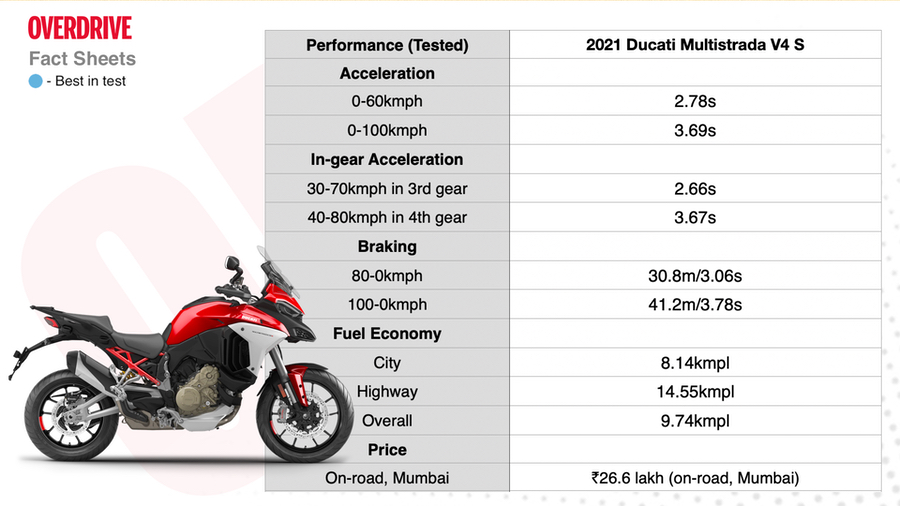 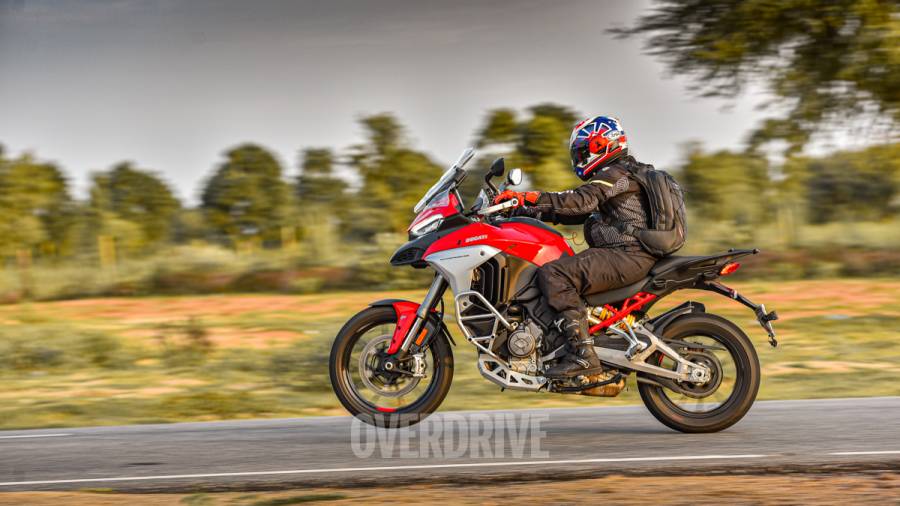 The power comes nice and strong from as low as 4,000rpm, but it's a racy engine after all and enjoys being ridden hard. Many Multistrada owners around the world like to take these machines to a track day too, and the engine complements that intent quite well. But the bike has now moved to a 19-inch front wheel because Ducati isn't doing an Enduro version anymore. This configuration limits your choices of sticky rubber, but the good news is that you can simply slap on off-road tyres and you are good to explore the wilder terrain. You can choose wire-spoke wheels as well, and that's the reason you don't get the sexy single-sided swing-arm anymore. There is an enduro mode too. 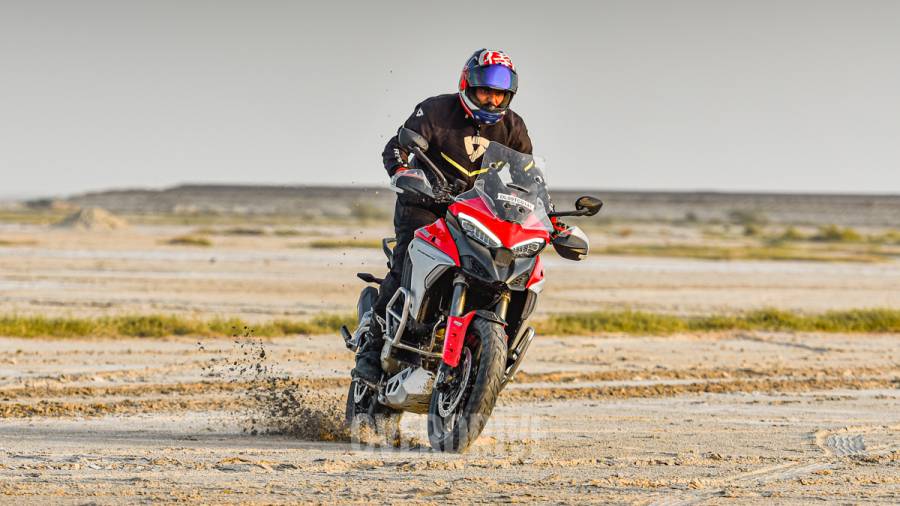 The Multistrada ships with the Scorpion Trail tyres, which will do the mild trails quite well and are impressive on the tarmac. Sure, the 19-inch front isn't as sharp on turn-ins as the outgoing 17, but there is still plenty of front end feel to impart confidence. If anything, there are more advantages of the setup because it improves the scope of the bike further and can let you crossover between road and off-road use without having to worry too much. These wheels and tyres are also complemented by the electronic suspension on this range-topping V4 S model and I think it's one of the best suspension setups in the business. 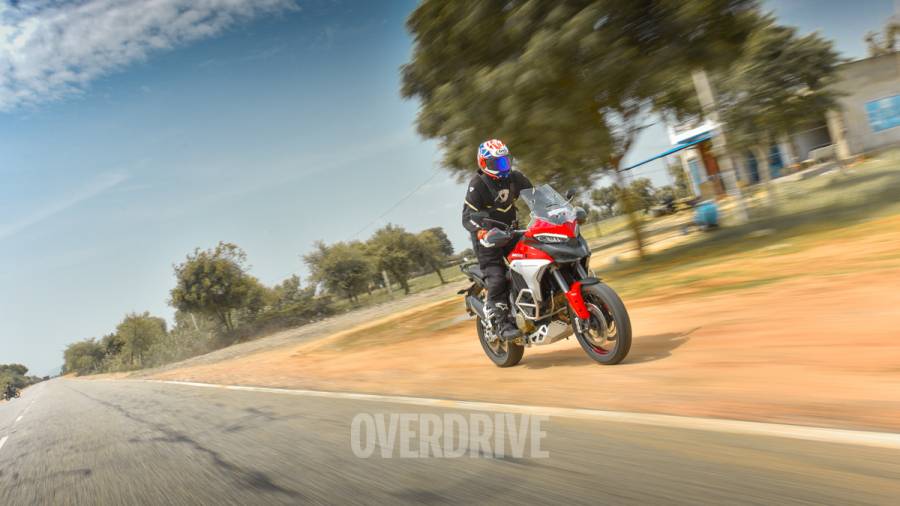 It wafts about nicely on poor road conditions and high-speed stability is superb. Show it some corners and the motorcycle smiles wide and will make you grin too. Sure, an onboard lap timer is a bit much, but it is seriously good around the winding roads, thanks to the lower centre of gravity achieved by the V4. That has its advantages off the road too as the bike doesn't feel as top-heavy as the 1260 or the 950. The Multistrada V4 is still more tarmac biased though and on the highway it truly shines. To that effect, it also has a new radar guidance system.

The radar system
A little black box that's nestled between the two headlights enables an adaptive cruise control system. It will detect trucks, cars and bikes and automatically adapt the speed depending on the speed of the vehicle ahead and the safe distance parameter that you have set on the console. The motorcycle dynamics make it different from similar systems in a car since bikers cut in and out of lanes far more often. But it is a matter of getting used to. 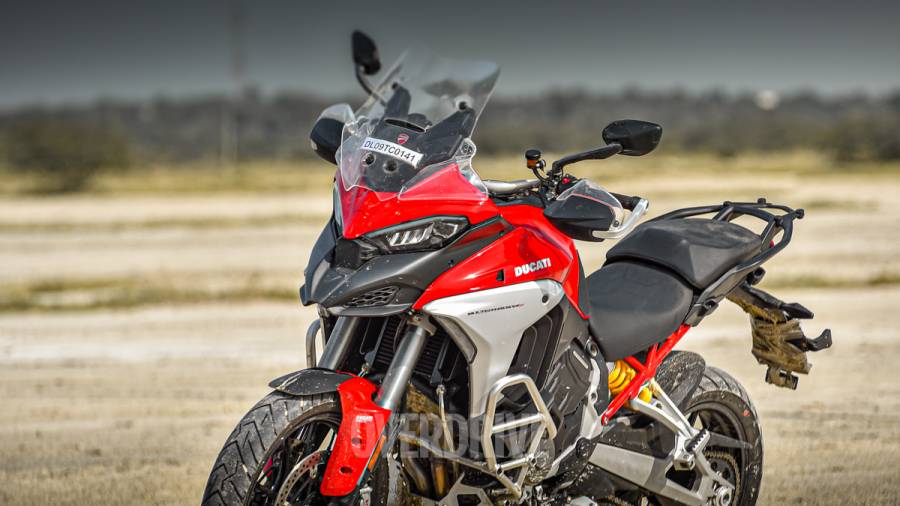 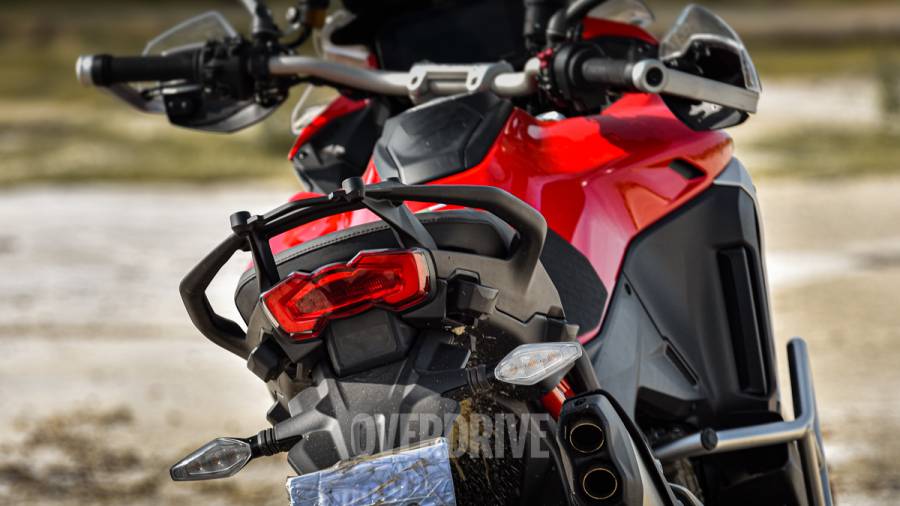 We found the system can be iffy at times. For example, if all three lanes of the highway have vehicles on them, the radar will sometimes latch on the slowest vehicle even if it is not in your lane. If there are crests in the road, it sometimes fails to detect vehicles that are in the dip, thus dropping speed rapidly when it finally detects them. 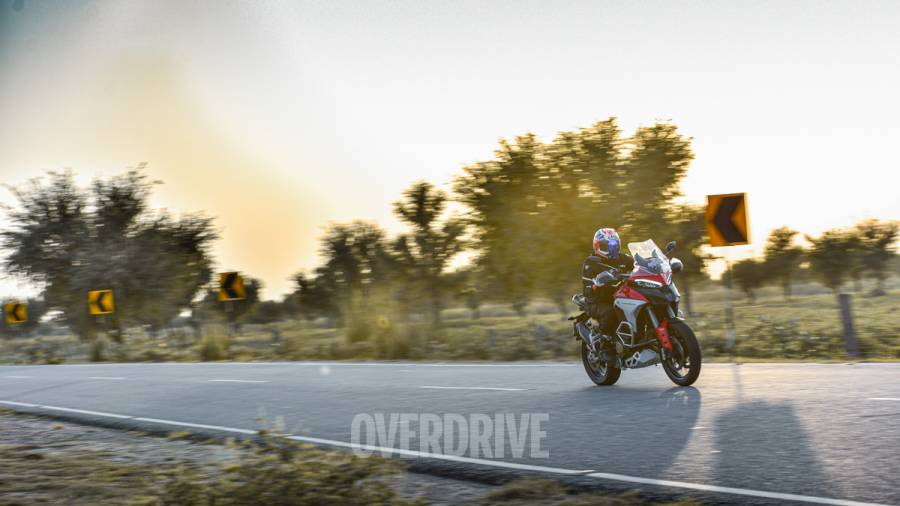 There is a radar at the rear too, which will warn you of vehicles in your blind spot using an amber light on each rearview mirror - and it's bright enough to attract your attention even in broad daylight. It understands the difference between vehicles you have overtaken versus vehicles that have actually closed in into your blind spot. This system works as advertised and is a big boon for bikers. I think it needs to be a standard fit for all motorcycles!

The dashboard
The big TFT dash shows a wealth of information and it can be adjusted for two viewing angles - seated and standing. It is built by Bosch and is essentially the same basic hardware as the 6.5-inch screen on newer BMWs. But this one supports apps, though the interface isn't as intuitive. 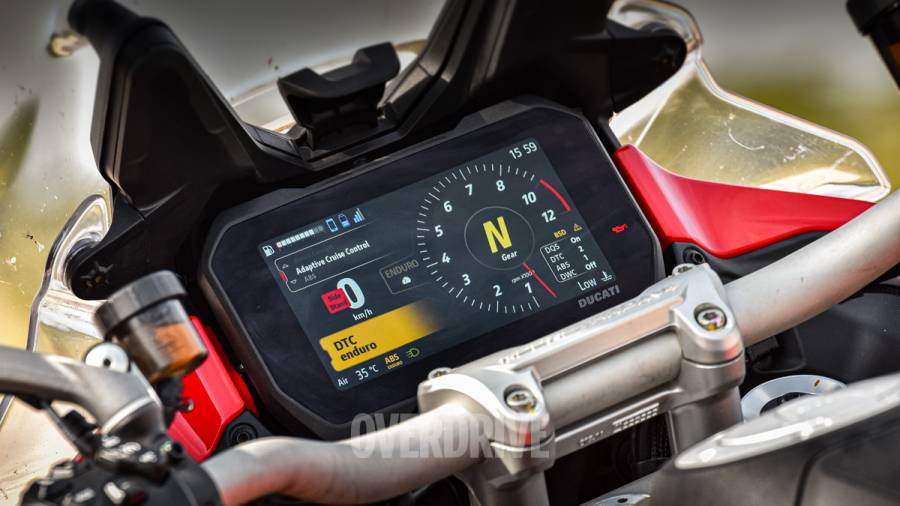 It features a navigation system that interfaces with the Sygic app on your phone. But to have the navigation on the screen, you need to keep the phone's screen switched on all the time too with the Ducati Connect app running - which is a problem. Ducati has given a storage space on the tank but big phones don't fit into it. Even if they do, there is no ventilation and therefore the phone eventually heats up and switches off. If you keep the phone in your pocket, there is every chance that some notification or something gets pressed on the screen and the Connect app minimises and the navigation screen on the dash goes off. So the only ideal solution is to mount your phone using a cradle (unless your phone has optical image stabilisation, says Apple). But you going to do that, you are better off with Google maps anyway - because Sygic doesn't know India that well.

More nitpicking
Continuing on the nitpicking, the quick shifter works great but the intent sensor is too eager. For example, if your left foot tilts forward even marginally under braking or when the cruise control slows down the bike, the quick-shifter thinks you want to downshift but since you aren't applying enough pressure it goes into a series of jerks which can get unnerving at highway speeds. 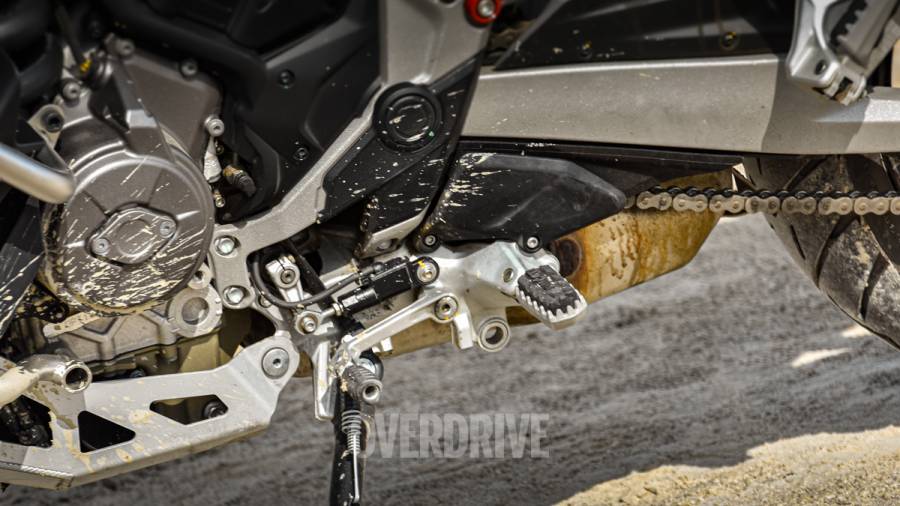 Find your way around these quirks and the rest of the motorcycle is simply impressive. It has superb braking manners, excellent highway manners and even with a pillion and their luggage, there is no dearth of power. The seat cushioning is firm and may feel too stiff at first, but a few hours into the saddle and you will appreciate the long-distance comfort they offer. And long distances is what the Multistrada loves, as it gobbles up miles like a hungry Tasmanian devil. 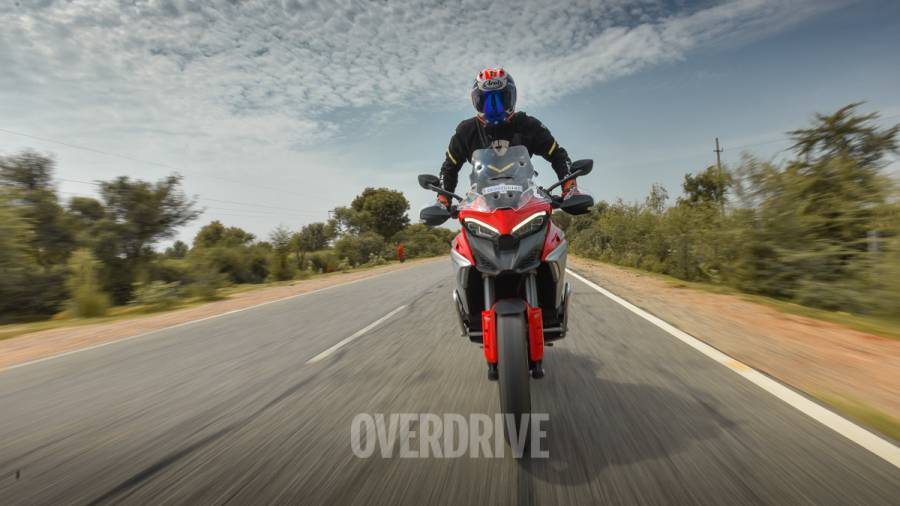 Verdict
Arguably, this is what the Multistrada always should have been - an adventure tourer more than a sport-tourer. The bigger engine packs more power but is lighter and compact giving the bike better ground clearance. It's also a smoother powertrain and contributes to making this bike a more refined motorcycle than its predecessors. Sure, the ergonomics are still more sporty and tarmac oriented than its rivals, but that's always been the essence of the Multistrada. And sure, it comes across as quite a pricey proposition - but spend some time with the V4 S and you will realise that for the amount of tech it packs, it actually offers tremendous value over any of its rivals. 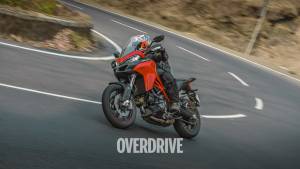