Looking fast standing still is a phrase so overused that I can't help roll my eyes every time I hear it. Yet I can't help look at the Audi S5 Sportback and feel that it does indeed look fast standing still. In fact it looks so fast that Audi has refrained from giving this bright shade of blue any fancy pants name like Azure this or Regal that or Sublime this or Magnetic that. It has cut to the chase and simply called it Turbo Blue. 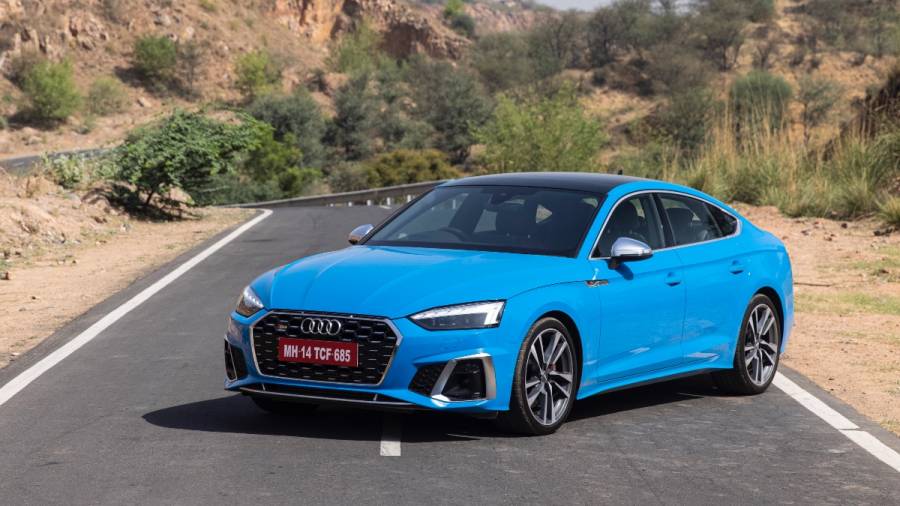 The S5 Sportback has been around for a few years now in pretty much this same shape. However a few cosmetic changes for this 2021 edition have really livened things up. The single-piece grille is the showstopper and a good lesson in how to do big grilles right. The honeycomb pattern matte black grille gets matte silver inserts and the air inlets get matte aluminium finished blade surrounds. You can also option the car in an all-black styling package, that deletes the chrome and brushed aluminium finishes. The headlights are Matrix LEDs with adaptive illumination and dynamic turn signals, the swiping kinds that Audi pioneered. 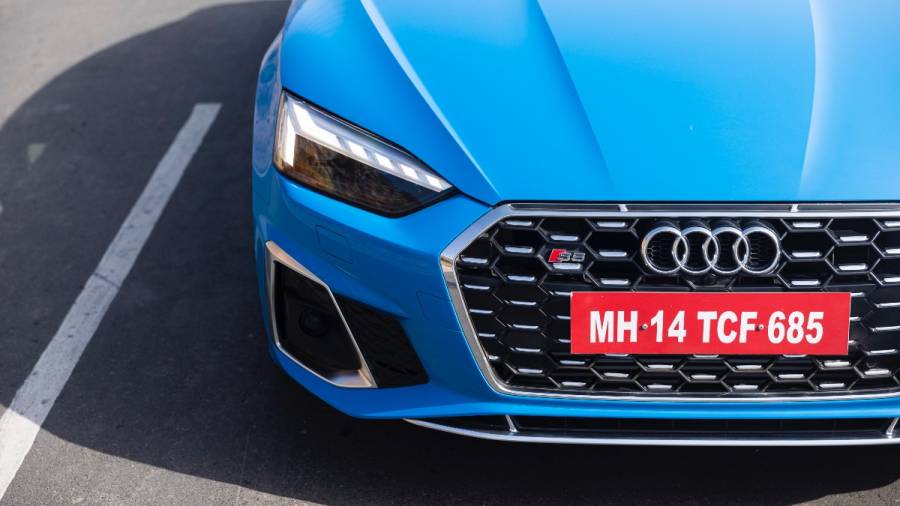 The profile is dominated by 5-spoke 19-inch rims that replace the 18 inchers from the previous version and they're running fat low-profile rubber too - 255 section Bridgestone Potenza's with a 35 mm sidewall height. That's a good statement of intent. Just not on peripheral Gurgaon roads, where I am driving this fine car. If you bring your good wheels here, they will end up taking a good beating. But bickering aside, this is a really stylish profile. The strong shoulder line brings out a lot of character and the fastback shape in this Audi series is a classic that remains immune to criticism. You can stand afar and look at it for a long time. 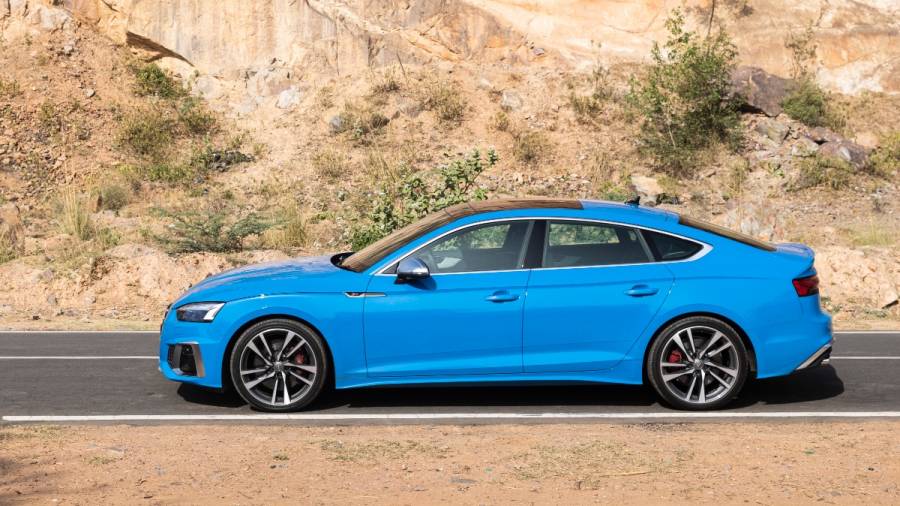 Now in the brochure Audi says, "a large rear spoiler accentuates the cars aesthetics even further," but when you come around looking for the "large spoiler" what you find instead is a lip spoiler. Lowered expectations notwithstanding, that's a good thing. It nicely balances the fastback shape and combined with the sleek LED tail lights, the rear diffuser and the quad pipes, makes this one of the best looking behinds in the business. 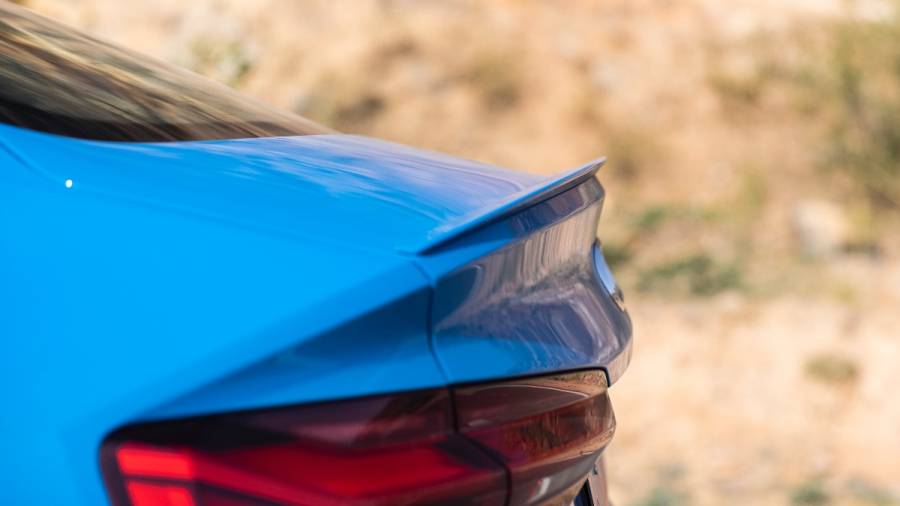 On the inside things are a little more understated. Less flashy and edgy compared with how it looks on the outside. In fact it feels like it's a different car than the one you thought you were getting into. The horizontal theme for the vents and the general layout does make this design feels a little dated. What saves the day though is that the quality is of a high order. All the surfaces feel good to the touch. The dashboard and doors get matte Aluminium finished inlays that can be optioned in black as well I believe, but this scheme seems to work just fine in here. The seats get a mixed bag of grey leather and Alcantara, while the door pads are also finished in Alcantara around the handle and switches. It's a good attempt to strike a symbolic balance between the sedate A5 and the monstrous RS5. The luxurious touch of leather with the sporty aggression that has now come to be associated with Alcantara. It's subtly done and therefore runs the risk of being overlooked by the non-discerning eye. 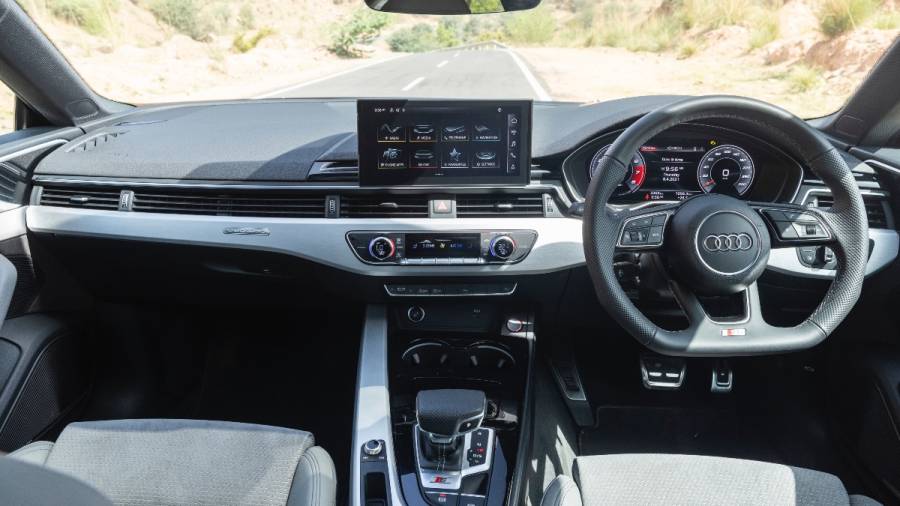 But the highlight is the new 10.1-inch multimedia display that does away with the rotary control knob for a touch screen interface. It's supposed to be 10 times faster than the previous interface and I see no reason to doubt that. It does feel plenty fast and the display is crisp and clear. For smartphone connectivity it gets both Android Auto and Apple CarPlay. The different driving modes can also be accessed through the screen. What I like is that Audi has retained the physical buttons and knobs to access the three-zone climate control, which makes it easier to change temperature and blower settings without taking your eyes off the road. 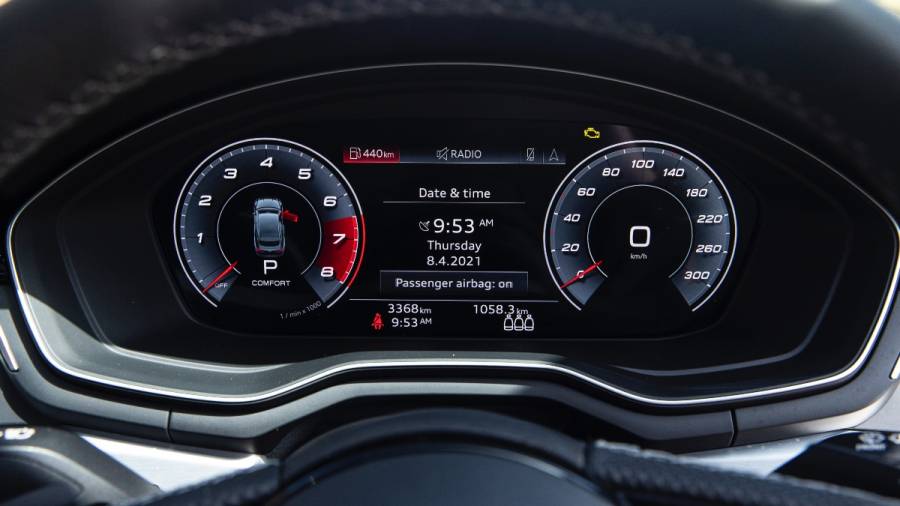 The driver gets Audi's Virtual Cockpit, where you can fool around with different layouts for the dials, change the size of the navigation screen area, and toggle through the information menus. I settled with the default layout where the dials are a regular size and easy to read.

The steering is the flat bottom type and the paddle shifters are placed on the wheel itself and not the column. It's a nicely wrapped unit that feels good to hold. It gets buttons to scroll through the menus and for telephony, but not cruise control. Those switches are on a separate stalk.

The front seats get a lot of adjustability, including 4-way adjustable lumbar support, that makes these seats a really nice place to be in especially when you're putting on the miles. The memory function though is available only for the driver's seat. At the back , there is more than enough knee room and unless the driver is sitting really low, enough room to place the feet under the driver's seat as well. The back-recline angle is appropriate and while under-thigh support is adequate, I wish the seat had a longer squab. But the real issue is headroom for tall people. I am 6' 2" and I had to rest my elbow on the armrest to prevent my head from brushing against the headliner.

For entertainment, there's an optional Bang & Olufsen 19-speaker 755 watt system, as fitted to our test car, and it does pack quite a bang. The sound separation is really nice and the bass comes in cleanly. 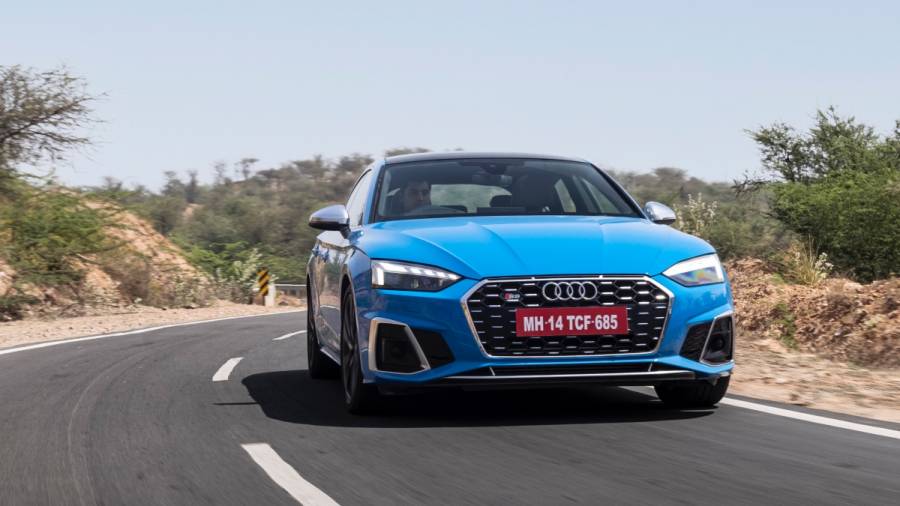 But that's not the only sound I am interested in. What I am really interested in is waking up the 3.0-litre turbo V6 petrol engine and making it sing. So this unit is making 354PS of max power between 5,400 to 6,400 rpm and 500Nm of torque from 1,370 to 4,500 rpm. It comes paired with a familiar 8-speed torque converter gearbox. On punching the starter the engine comes alive with a mild roar before settling into an idle. You get five driving modes - auto, efficiency, comfort, dynamic and individual - which can be accessed either through the touch screen or physical buttons places below the HVAC controls. Efficiency mode keeps things quite sedate. The throttle response and the gearbox are quite lazy. In fact when you pin the accelerator it stays in the same gear allowing the torque wave to maintain speeds. In comfort mode the gearbox is more sensitive to changes in throttle position. So at part throttle it upshifts at around 2,000rpm and downshifts follow a moment's hesitation when you pin the throttle. In this mode the steering is also fairly relaxed and not absolutely direct. The ability of this car only really comes through in dynamic mode. The exhaust note gets louder, the throttle is more sensitive to inputs and the gearbox holds the gear much longer. Even the suspension feels more taut despite this particular car not being specced out with the optional adaptive dampers. In dynamic mode the steering also feels more alive. But while it does get direct and placing the car accurately is not a problem the steering is lacking in feel so you don't really know what the tyres are up to. That dulls the experience a little bit. But the highlight of the experience is the throaty engine note. It never gets really loud but it's enough to keep you entertained. In fact the engine sounds great even in the milder driving modes so there is always some level of engagement with the car. When you push it till the redline, the upshifts are quick and smooth. The power delivery remains linear and while it's fast it's never scary. In terms of numbers 0-100kmph comes up in a claimed 4.8 seconds and the claimed top speed is 250kmph. 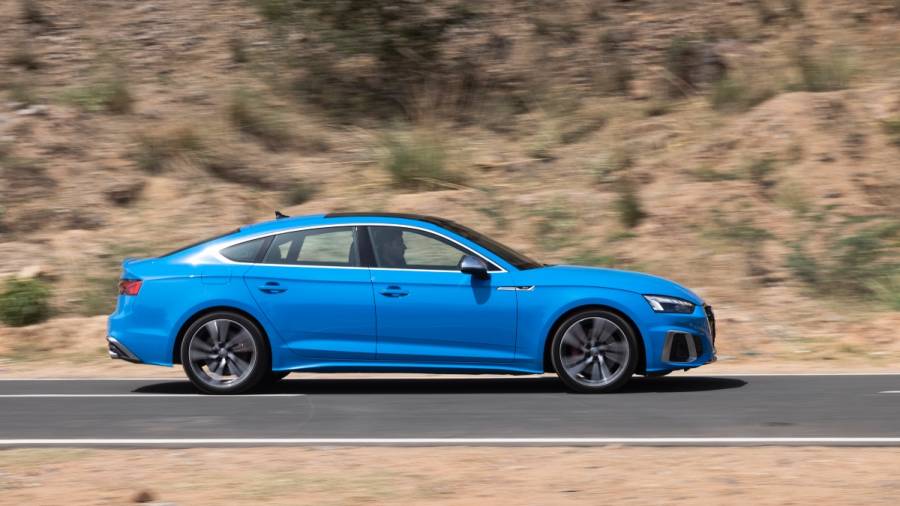 The handling character of the car is defined mainly by the quattro AWD. So it gets a self-locking differential that splits the torque in a 40 by 60 ratio between the front and the rear. So the handling of the car is always a little rear biased. Heading into a corner, turn in is quick and it's easy to carry a decent amount of speed through the apex. During exit on full throttle, even with traction control off, the rear tucks in neatly and the S5 stays solidly planted through the entire process. The low profile Bridgestone Potenzas also offer a great amount of grip, and breaking traction requires considerable effort. I did hear a squeal or two but only at the absolute limit. Overall, it's a car that you can enjoy driving fast quite casually. In dynamic mode it feels quite stiff, so while the ride gets busy on a poor surface it's never really uncomfortable. But you do have to watch out for the big bumps and potholes. Also the ground clearance hasn't been altered for India so going over sharp speed breakers requires some careful attention. But as a result body roll is negligible and it makes the S5 feels like a tight unit that wraps nicely around the driver. In comfort mode the ride gets more plush and in town this is the mode to best leave the car in. Like I mentioned, the suspension can be optioned with adaptive dampers but the car we are driving today doesn't have that. So in the individual mode settings you can alter the exhaust note and steering feel but not the suspension. 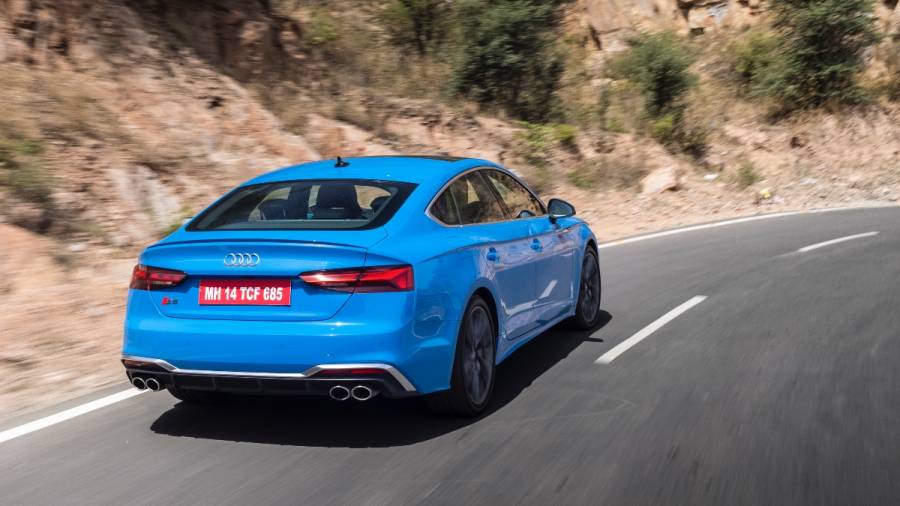 Overall the S5 Sportback is a very capable and yet friendly car. It's approachable and will not scare away buyers looking for more performance from an everyday sedan. It's quite practical too with 465-litres of luggage space and relative comfort for four occupants. On the flip side though it is a little pricey, coming in at around Rs 79 lakh (ex-showroom) and that perhaps is the only chink in the armor, especially keeping in mind the competition. The recently launched BMW M340i undercuts the S5 Sportback by a cool Rs 16-odd lakhs and while the body styles are different, the Beemer makes more power, is dimensionally similar and comes with rear-wheel drive, endearing it to the more enthusiastic driver. But objectively, the S5 is a fast car that is easy to live with, and if making heads turn is high on your list of priorities, then this is a good option.