For years now, the Mercedes-Benz S-Class has been the final word for an ultraluxe sedan. Space, ride comfort, opulence, cutting-edge tech and silky-smooth refinement - it has it all, and is usually the benchmark we judge a new top-tier luxury sedan against. So, for Mercedes to call the new-gen GLS 'the S-Class of SUVs' it really must be something. The previous GLS, best-seller as it is, isn't exactly an easy act to follow either, though it has been a long time since its last refresh. So, are you really getting an S-Class equivalent, in SUV form, with the GLS? 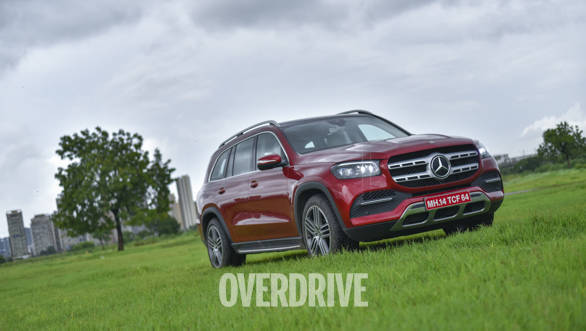 The GLS sure does represent the superlative, at least as far as real estate on the road goes, being even longer (77mm) than before! At 5,207mm long, it may not stretch along as far as the S-Class (5,255mm long) but its 1,823mm height and significant 2,157mm width means it's not exactly lacking in square footage. Not to mention, its 3,135mm long wheelbase is just 30mm short of the S-Class, a real feat considering the inherent packaging constraints of an SUV with all-wheel drive. 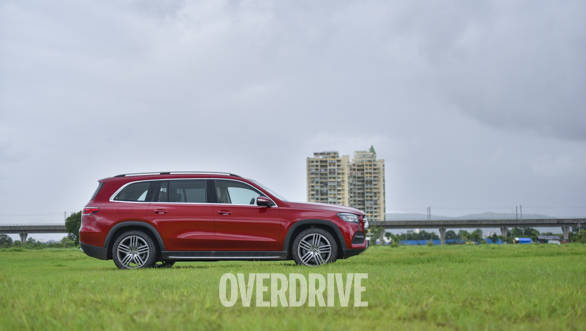 It's not the last of the headline numbers either, with the GLS riding on lovely split-spoke 21-inch wheels, wrapped in, get this, 315-section Pirellis at the rear! A select few supercars ride on 315s at the rear but none of them make their tyres look 'adequate' but with the sheer size of the GLS, that's what happens. For anyone worried about Merc's family face not being distinctive enough to help the GLS stand out compared to the new GLE, rest assured that the GLS looks a clear size larger without needing to resort to oversized grilles or anything of the sort. The new GLS does that on pure merit. 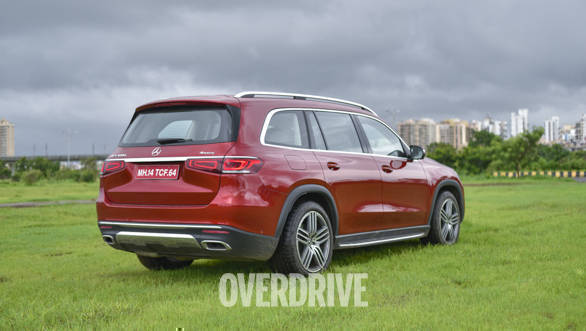 It is a softer-looking GLS though, with less vertical surfaces and straight lines, but looks all the more elegant for it. With most SUVs (and cars, for that matter) tending towards hyper-aggressive designs, the GLS looks like a giant rock that's been sculpted by the tide of nature over years. It's just looks so wonderfully organic when its parked, that the light-show the LED headlights do when you push the starter button looks like literal magic from the outside. It's not just entertainment for bystanders though, the cabin of the GLS is quite special too.

Does the cabin live up to the tall promise?

In a word, yes, and then some. Starting with the second row, where most owners are likely to be sat, you really don't expect to see lounge-like seats, especially in an SUV that's also a 7-seater. So, when you open the door of the GLS and climb in (you do need to take a step upwards), the illusion of having a seat carved out for yourself under a massive panoramic sunroof makes it a very, very inviting place to be. 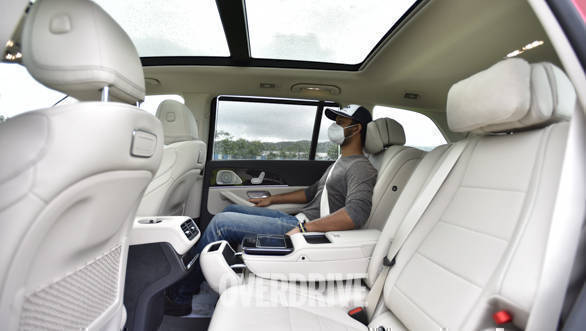 The fold-out arm rest helps that illusion, cradling a touchscreen tablet with an MBUX interface that helps you control infotainment, the super-silent five-zone climate control and ambient lighting among others. While it's a sleek unit that rises electronically at the push of a button, we wish it didn't have its South Korean maker's branding on it. Coming back to the ambient lighting, it can be set as loud or discreet as you like, and bathes the interiors (and occupants) in a soft glow of light making for the textbook definition of 'ambience' at night, with most crucial controls gaining backlit switches. The rear seat entertainment package with its twin 11.6-inch touchscreens would be high on my list of options to tick though. 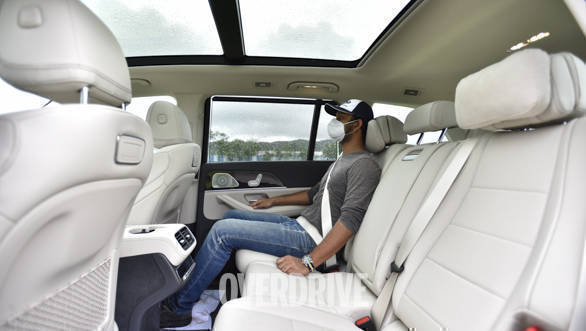 There's a lot of leg room to stretch out in, lovely neck pillows to sink back into and the seats are well contoured to hold you in place. There are also electronic adjustments for everything you can think of, including the sun blinds and sun roof cover, with the co-passenger side also gaining controls to adjust the front seat in case you have a tardy chauffeur. Where the second row of seats can't quite match the S-Class is in offering a fully-relaxed recline angle, with the seat back stopping just short of what would be ideal for a nap. That being said, under thigh support is more than adequate, with a little extra cushioning to help keep your legs at a comfortable angle but it does take getting used to. If you flip the second-row arm rest back up, there's plenty of space for a third passenger, but legroom is compromised thanks to the large central storage bin and physical climate controls for the second row. 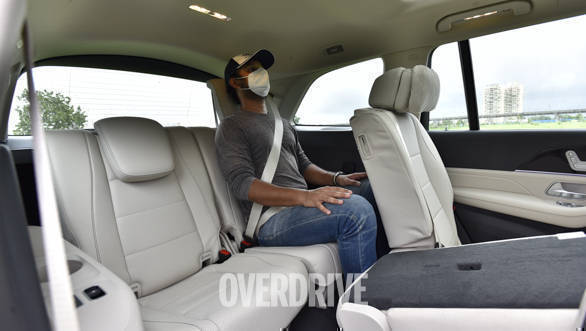 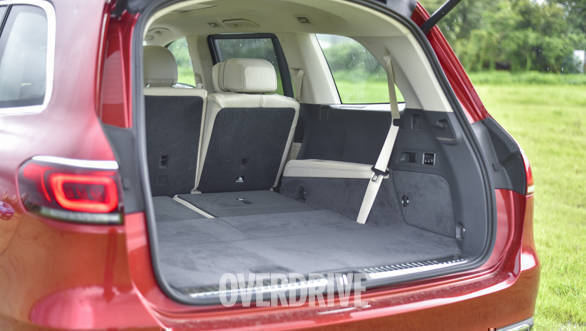 As for the third row, accessible through an electronically folding second row, it's pretty much for kids or small adults as expected. While the seats themselves are comfortable, the limited space does mean it takes more of a compromise with second row passengers to free up leg room. The third-row seats can be folded at the push of a button to free up 890-litres of boot space, which otherwise clocks in at 355-litres with all three rows up. If you must move houses with your GLS, you could. With both rows of seats folded, there's a massive 2,400-litres of space on offer, and the GLS even lowers itself (50mm) to make hoisting things into the boot easier.

You'd actually be doing yourself a disservice if you don't get behind the wheel of the GLS every now and then. With a wide range of adjustment from the driver's seat and excellent visibility all around, even at the lowest seat setting you still get a commanding view out. Looking further past the twin 12.3-inch driver's cockpit and infotainment, the power bulges on the hood creeping into your line of sight do help remind you what's under the hood. But we digress. 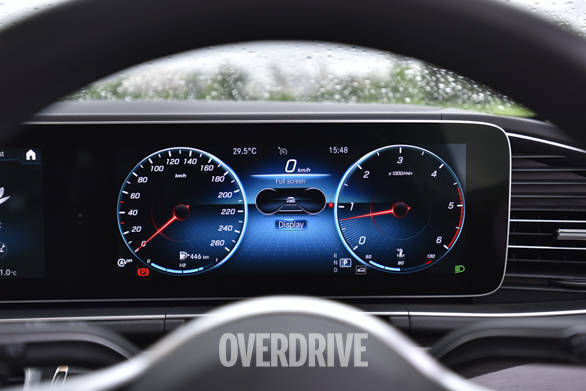 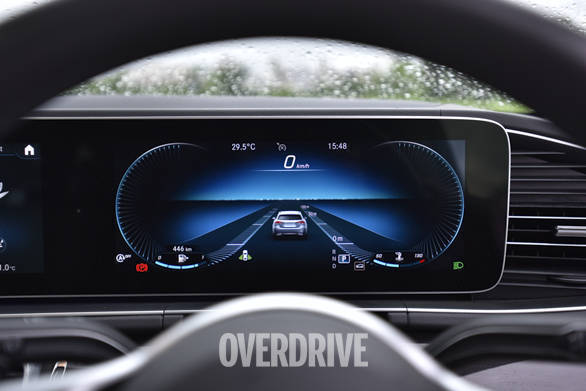 With multiple themes for the MBUX infotainment, and corresponding styles for the instrumentation, you can choose to have an overload of information given to you, or just the bare basics. As expected, the quality is impeccable with soft touch materials extending all the way around to even the lower half of the cabin, and every switch or button responds to inputs with a finely-engineered click. And while the dash may appear to be exactly similar to the dash on the GLE, the extra space is noticeable, especially with the wide central console. Standard equipment is pretty generous too, with the excellent 13-speaker Burmester audio setup, nine airbags, and safety systems like the active brake assist, and blind spot assist to name a few. With the hi-definition 360-degree parking cameras, navigating the huge GLS into a spot isn't as nerve wracking as one would think either. But pulling out of your parking and onto the road is where the fun starts.

Available with 3-litre inline 6-cylinder petrol and diesel powertrains, it's easy to mistake the latter for the former when you first push the starter button, and even when you step on the throttle. Refinement on this new OM656 diesel is on another level of smooth, with a muted rumble only as you climb revs! 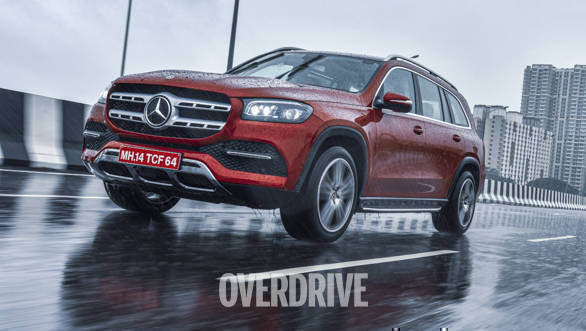 With 330PS and 700Nm, both power and torque are up over the previous-gen GLS, and you get peak torque at just 1,200rpm. Mated to a 9-speed torque converter, performance is seamless and in regular driving we doubt you'd see the digital rev needle climb over 2,000rpm even to stay ahead of traffic. In fact, most times I looked down at the clocks, the GLS was effortlessly rolling along under 1,500rpm. It's the sweet spot for the engine, and at 100kmph where the engine speeds are under that figure, it feels almost like the GLS is being pulled along by gravity, or some similarly mysterious force. Even at 120kmph, the engine's ticking over at 1,650rpm with your right foot barely brushing the throttle. Understandably, it takes very little to get the 2.5-tonne GLS up to high triple digits, even from there, with a claimed top speed of 238kmph. The GLS returned efficiencies of 12.3kmpl on the highway, and grazed the 5kmpl mark in the city. 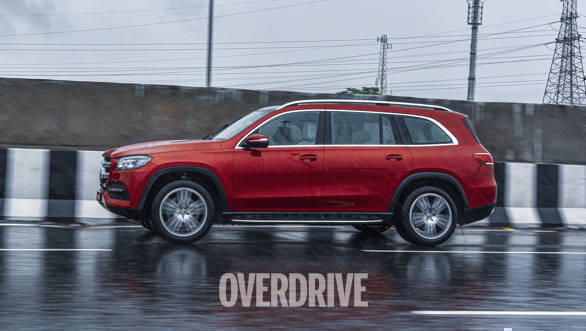 In our testing, the GLS 400d pounded the 0-100kmh run in 6.6s. With roll-on figures hovering around 1.5s for the 30-50, 50-70 and 60-80kmph metric, the GLS is quite the rapid SUV when you need it to be. But getting the gearbox to kickdown, post a second's worth of hesitation, isn't really the way to drive it. The most enjoyment (and amazement) is to be had gently rolling onto the throttle at low revs and watching as the numbers pile onto the speedo, as you pass by other traffic. There's a suitable amount of modulation in the controls for any chauffeur to come off as skilled and smooth, even in the brakes, which are progressive but very powerful when called upon. Bringing such a 2.5-tonne machine to a halt from 100kmph in 36.5m and 2.7s takes a special setup indeed. 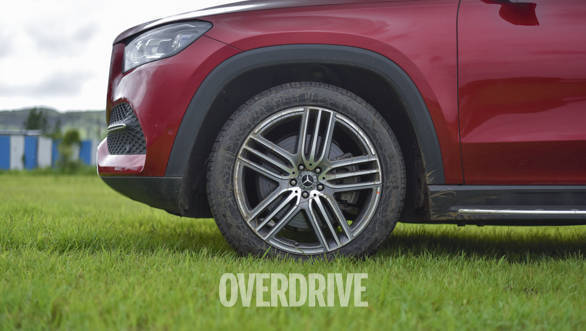 Mercedes hasn't offered the excellent 48V-based E-Active Body Control on the GLS, which rides on standard air suspension. Considering it's offered on the smaller GLE at about a Rs 35 lakh premium, which makes it more expensive than the larger GLS, we think the advantages of the system (tighter body control among others, as we found in our first drive review) could still convince buyers to fork out a little more for it on the GLS too. As such, the GLS has a cushy ride, evening out impressively as the speeds rise, with just a hint of the extra pliancy in the air suspension evident in how the GLS reacts to dips in the road.

Though the GLS does have drive modes, the absence of a Sport mode is missed. It's possible that could've firmed up the suspension just the right amount to control some of the lateral movement we've spoken about. Given the size of the wheel/tyre package, it does get caught out on sharper bumps but body movements are within perfectly acceptable limits over speed breakers and the like. There's definitely the sensation of floating along, even if it's not quite on the same level of bump absorption as the magic carpet ride on an S-Class.

As for handling, the GLS hides its weight and size really well under most driving circumstances thanks to a light steering, but physics catches up with it in the corners when you up the pace. It'll lean into sharper turns at anything above an average pace but it stays impressively level over sweeping corners, and won't disturb occupants in the rear. As for heading off the beaten path in the GLS, off-road mode gives it heaps of extra clearance (60mm) to clear most obstacles, though we'd be wary of damaging the low-profile Pirelli P Zero rubber over technical terrain. 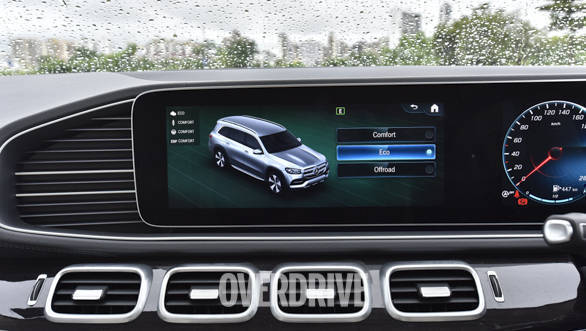 Considering the space, versatility and equipment on offer in the GLS 400d with its price of Rs 1.20 crore (on-road, Mumbai), it starts to look like immense value against the ultimate Mercedes sedan, which is a little over Rs 1.6 crore (on-road, Mumbai). It even appears like THE sensible buy against the smaller GLE 400d (non-Hip Hop edition), with just about Rs 11 lakh separating the two. That's really a small price difference to pay for the ultimate Mercedes SUV in terms of comfort and luxury. And, anyway, when was the last time you heard of an S-Class with a proper off-roader's 500mm of water wading capabilities? 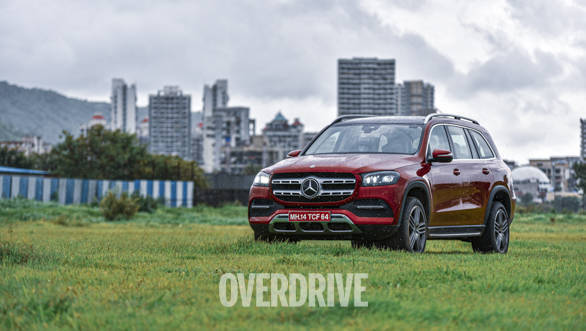