Rs 1.25 crore before taxes and registration! Mercedes-Benz's bestselling SUV (Mercedes has sold over 3 million of them over three generations across the globe), the Mercedes-Benz GLE, hasn't just grown larger, more powerful, efficient and less polluting, it's also gotten so much more expensive. But in all fairness, it's only the GLE 400d I'm referring to and it's the only one in the GLE range to be imported as a completely built unit, offer the Hip Hop package and additional kit that puts it in a class of one. 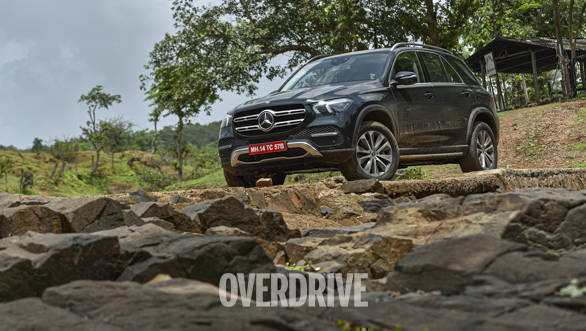 Still, that is big money, so big you could buy the recently launched GLS, (which Mercedes-Benz India dubs the S-Class of SUVs) and still have lots of change left over. If you had to run the numbers, the entry point for the locally-made GLE 400d is approximately Rs 10 lakh less than the entry point for the GLS. That is an incredibly slim margin and I am not sure what Mercedes-Benz India is trying to do here? Upsell a GLE customer and draw him to the GLS? Add much more value to the GLE knowing it's the more popular choice and at the same time command a healthy margin? What's the gameplan? What I do know is that I spent the better part of a week living with the GLE and here is what I discovered. 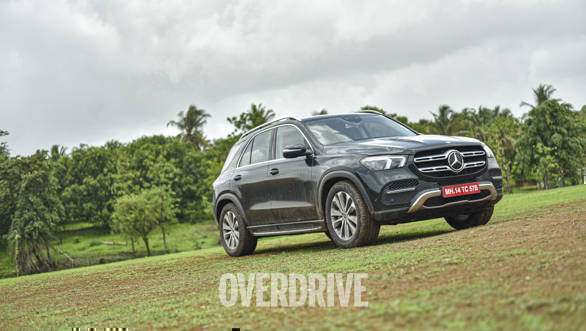 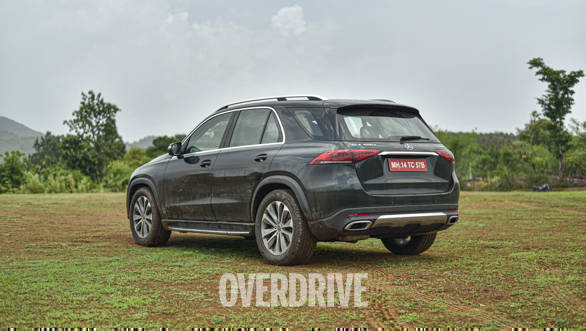 The GLE is sensational inside, and that is the most important thing because that is where you will find yourself all the time. The exteriors I'm not fond of at all, and four generations later I still don't feel the design has progressed much. There are some versions, like the Coupe body style and the AMG Line with the single slat running horizontally across the pincushion grille, but this version just does not excite me. It still has that sense of ungainliness and misplaced proportions that just don't sit well with me. Even that stunning bottle green shade of paint isn't doing much to alleviate the way this looks on the outside. But step inside the cabin and this is old-school Mercedes. A cabin so fine, you wonder if you've just stepped into a grand palace. The fine-grained leather of the seats, the wood panelling on the dashboard and the centre console, the aluminium bezels on the air-con vents, even the massive glass infotainment screen and instrument panel that is now standard equipment on all Mercs, it all packs in complex notes and exquisite layers to make for a luxurious greenhouse. 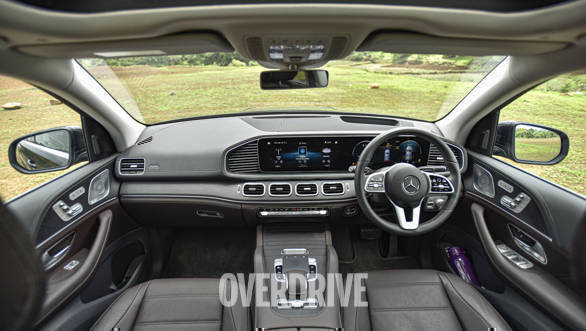 Yet if you want to boogie, disco, or hip hop, simply change the array of interior lights and accents including the palette on the instrumentation. Lay on the right mood and get in the groove. LEDs have brought a whole new dimension to in-cabin lighting and Mercedes Benz exploits this to the T! 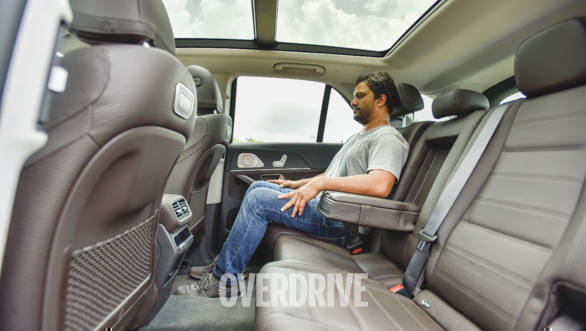 The GLE sold in India is the long-wheelbase version, but what Mercedes-Benz India has cleverly done is offer the electronically adjustable second-row seats without adding the third row that is offered in other global markets. So what you get is a generous boot and enormous middle row room that can be adjusted electronically. This adds space as another dimension to the whole luxury thing going on inside that cabin. 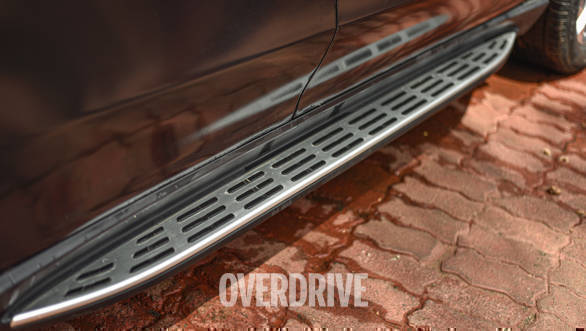 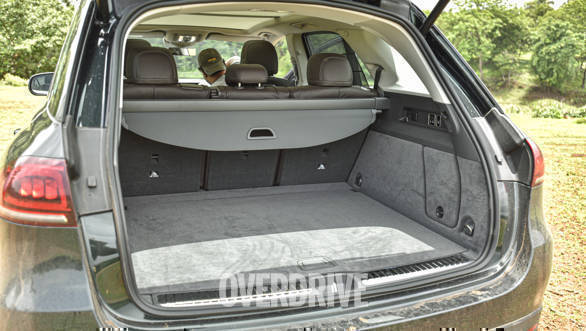 On another note, some of the ergonomics could have been better, especially stepping into and out of the GLE. It is a fairly large step up into the cabin, the running board is narrow with little space to place your foot firmly, and without a grab handle, stepping into and out of the cabin can be tedious. With my recent knee surgery, this process became all the more painful and I can only surmise that owners with knee joint issues will face some problems. 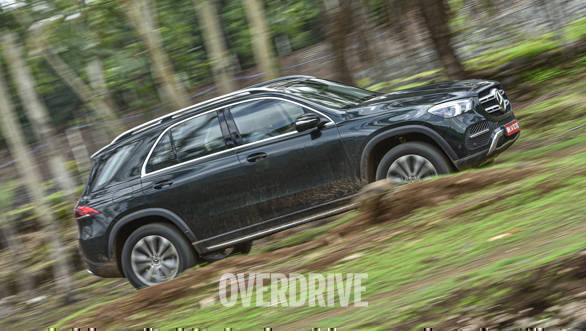 The GLE 400d has the newest generation OM 656 Mercedes-Benz engine under its hood. This 6-cylilnder 3-litre inline diesel already meets the latest Euro 6d emission norms and that is its biggest calling card. Its other big-ticket is its power and torque figures which have been bumped up significantly from what was present in the previous generation SUV. You now get 335PS and 700Nm of torque, impressive for a mid-size SUV in its segment. This engine packs in a host of emissions curbing tech, its got a diesel particulate filter, selective catalyst reduction that uses AdBlue, and exhaust gas recirculation. There is a lot going on in the whole intake and exhaust to keep emissions in check. 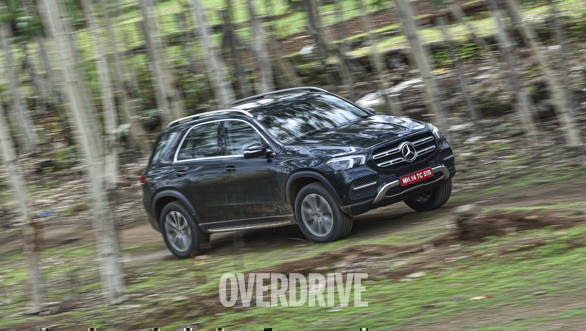 This engine is refined, it's powerful and has enough grunt to almost feel as aggressive as a high-powered petrol. The ferocity and speed with which the torque spins the wheels is amazing to experience. In an instant, you are able to zip by other commuters in urban traffic, or even get past cruising traffic out on the highway instantly.

Seeing the way the GLE 400d behaves I'd like to get my hands on the petrol 450, and that is only because I'd like to check out the overboost facility delivered by the same 48-volt battery management system also found in the 400d. In this SUV however, the system is used only to manage the e-Active Body Control system and a few other electronics on board, which I will come to a few paragraphs ahead. 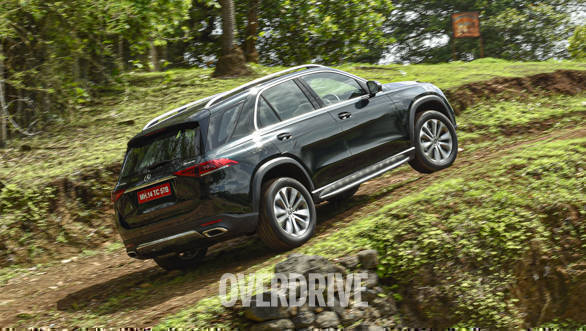 The GLE 400d is a full-time all-wheel driven SUV, but torque can be split between the front and rear wheels. In the 400d this split can go as much as a 0-100 per cent, front to rear. The 9-speed automatic is par for the Mercedes course, but in the 400d with the Off-road package you also get a manual mode which allows you to hold a gear without it shifting up automatically. This is very useful when you're off-road though I doubt anyone will ever take it far off the beaten path. 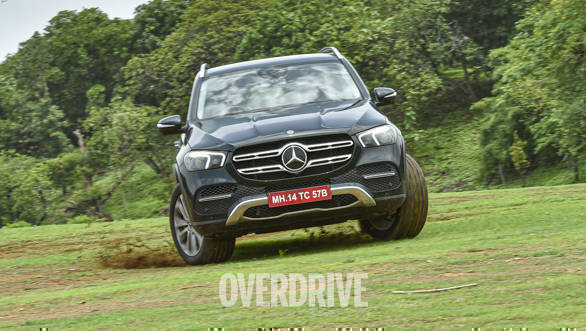 What I did like is that the GLE 400d is the first SUV from Mercedes or any other manufacturer that does not have a Sport mode in its jukebox! It sings an altogether different tune, and this one is called Curves! The dynamic mode selector in the GLE 400d offers 4 driving modes, Comfort, Economy, Off-Road and Curves. The Curves mode is exclusive to the variants possessing the e-Active Body Control, whereas the standard GLE gets just three driving modes, Comfort, Eco and Offroad. The Curves mode further offers three additional levels of selection dubbed Level 1, Level 2 and Level 3. Glad there's no fancy nomenclature! Each of these levels alters the suspension response depending on the surface conditions, the steering position and the throttle applied. And the way the 400d turns into a corner or holds its line through it is impressive. It reduces body roll by a huge margin and even controls dive under heavy braking. 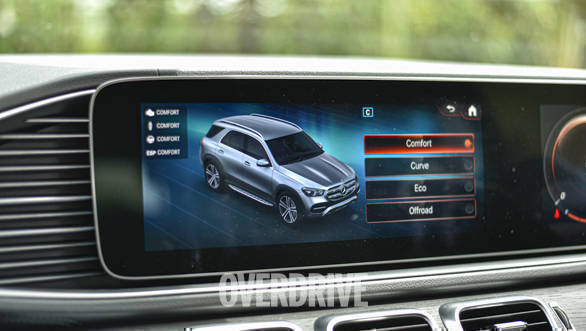 The GLE 400d also executes its off-road routine impressively. It's got just a little under 200mm of ground clearance in standard mode, but in off-road mode that rises by either 30, 60 or 90mm, significantly increasing its off-road capabilities. At highway cruising speeds, the GLE 400d lowers itself by 15mm to enhance aerodynamic efficiency. 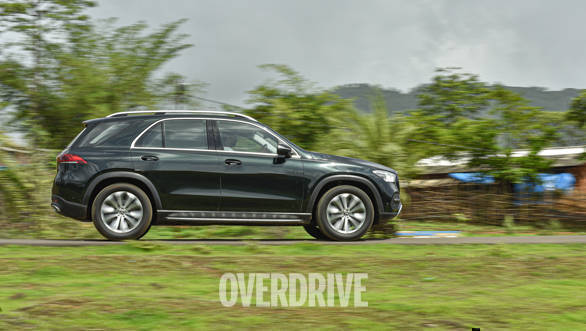 The complete GLE range does not get a Sport or Individual driving mode. So no getting into traffic light drag races. Not to say that the GLE 400d is a dull car. Smash the throttle to the floor and the wave of torque that engulfs you is intoxicating. This large 2.2-ton SUV is quick, Mercedes claims it can get to three-digit speeds in just 5.8 seconds, but on our test run (in wet conditions) the best we could manage is still a blisteringly rapid 6.9 seconds. Overtaking speeds are also incredible, in just a fraction of a second, the big GLE is able to drop several gears on its 9-speed automatic to get the SUV into the chunkiest part of its powerband and charge forward explosively. 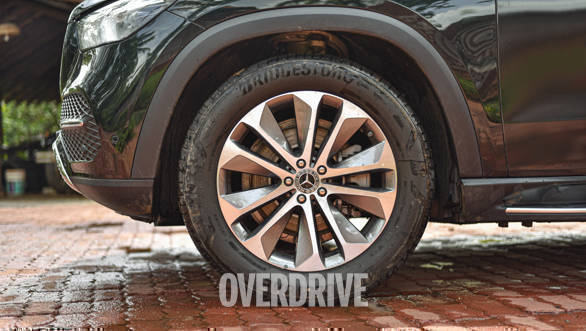 Braking is also quite impressive. The massive 400mm ventilated discs work in conjunction with massive 6-pot fixed calipers to bring immense stopping power to the mix. We hit a complete stop from a 100kmph in 42.1 metres in just 3.1 seconds. Again this was in wet conditions so I surmise dry condition figures would improve considerably. Also here the e-Active Body Control comes into play, the electronically controlled air dampers adjust instantly to the forces acting on them eliminating the dive you'd normally experience under such harsh braking. 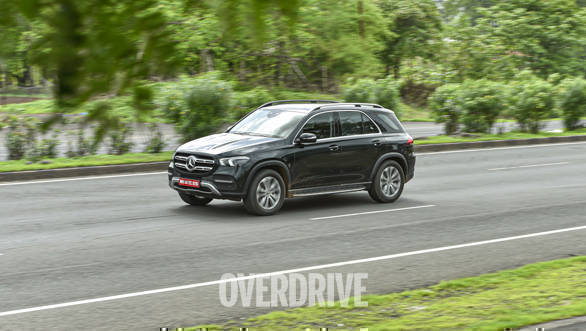 On the fuel efficiency front, slip it into Eco mode for the best results, otherwise on highways get into Comfort mode just to derive a good balance from the engine and suspension. At best, we saw an efficiency of 12.2kmpl on the highway which dropped down to 6kmpl in the city. Bear in mind traffic was not like it usually is, so I'd expect in city numbers to drop a bit when things return to the way they were and traffic volume increases. The GLE 400d, the CBU variant on our test, gets a bit more safety kit as standard compared to the rest of the range. The coolest feature is the door open approaching vehicle feature that warns you audibly and visually if you try to open a door as there is a vehicle approaching from behind. It's just one of those things, you can see working actively rather than the more passive stuff like the multiple airbags or the crash impact zones etc. Another feature you can visually experience is the lane change warning lamp that lights up on the outside rearview mirror if there is a vehicle too close in the other lane, or the large proximity warning that flashed on the HUD if you get too close to the vehicle ahead or even the automatic braking that senses an imminent threat of running into the vehicle ahead and applies the brakes if you don't. 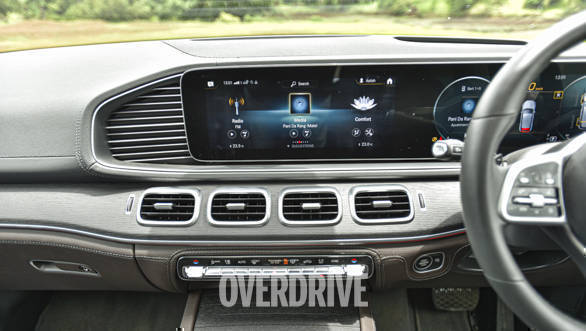 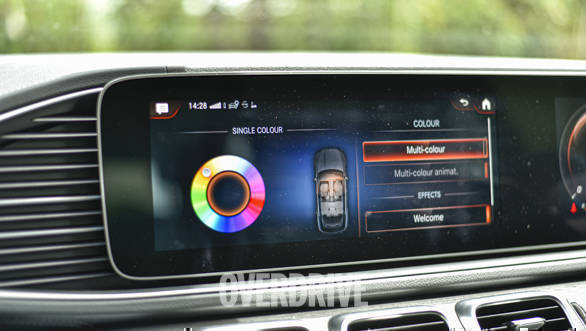 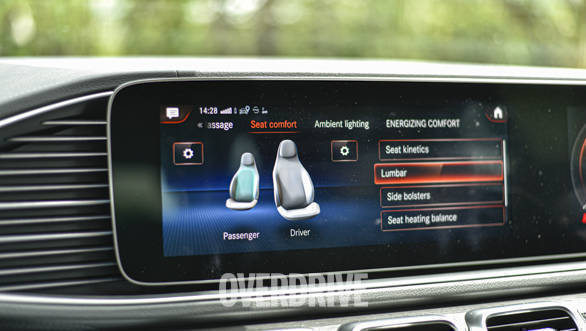 There is also a full suite of luxury, convenience, and comfort features in the GLE 400d that ticks all the boxes. The headlining feature is, of course, the MBUX, Mercedes-Benz's proprietary connected multimedia system. It's brilliant to look at, has a high definition display that throws up stunning colours and the resolution from the exterior 360 degree camera's is just incredible. But that's just physical beauty, there is so much more packed within this system. The GLE 400d also has those gorgeous active seats that hug, massage and relax you at the touch of a few buttons. The Burmeister sound array too is rocking. The only grouse I had was with the gesture control which is irritatingly fidgety. I just couldn't get it to work, and it kept popping up notifications when I least expected it. 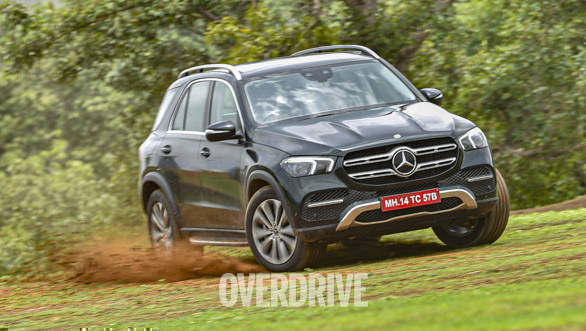 The GLE 400d is a technological tour de force. It packs in much and delivers even more. It's got a powerhouse diesel, a superb drivetrain and then there's all that tech. The price tag is steep, very steep, but you get a whole lot of Mercedes-Benz, along with the bragging rights that should be a hit in certain circles! Mercedes, however, has done the smart thing and also brought in the 400d in CKD guise which has dropped the price to Rs 89.9 lakh before taxes and registration. It's a sweeter deal for me because while that off-road mode clubbed with the e-Active Body Control and the 48-volt power management system was impressive, it's the engine that tickles me. and the locally assembled GLE 400d compromises on very little. You get all the goodies, take out the fancy frills and still get a blockbuster. The GLE is one of the worlds best-selling luxury SUVs and for good reason.