In our growing years, we have posters of motorcycles that we wish to buy someday. While our folks are happy taking us around on their commuters, we dream of possessing "big bikes" that would look, sound and feel distinct compared to whatever is on the road. After reaching the legal age of riding and also managing to get the best grades, there's this one day when you are standing in front of your folks with this million dollar question - "Mom, dad.Can I buy a bike now?"

Assuming they agree to this request, there's often a conflict of opinion between what they want you to buy and what you'd aspired to get. While performance, design and features play a role in your decision, it is practicality, efficiency and safety that make them think otherwise. However, what if there's a motorcycle that takes care of both these worlds. Too much of an idealistic thought? Not really, claims Bajaj Auto with their younger sibling of the Dominar 400, the Dominar 250. 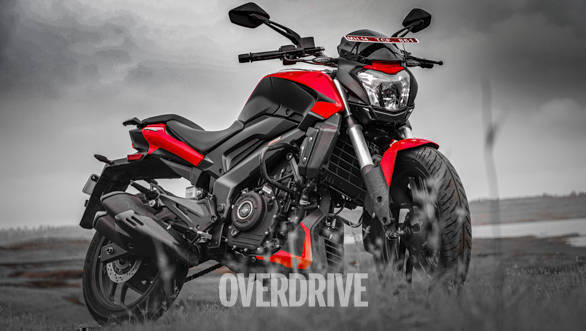 If the Dominar 400 and the 250 are parked side by side, you won't be able to differentiate between them. However, to do that, there are four main things that you have to look for. First, the three-dimensional D250 emblem on the rear panel, second, the paint, as the Dominar 250 comes in red while the D400 comes in green, apart from the common shade of black, thirdly, the wheel finish, unlike the D400 that gets machined alloys, the 250 makes do with simpler matte black alloys and lastly, the tyres. 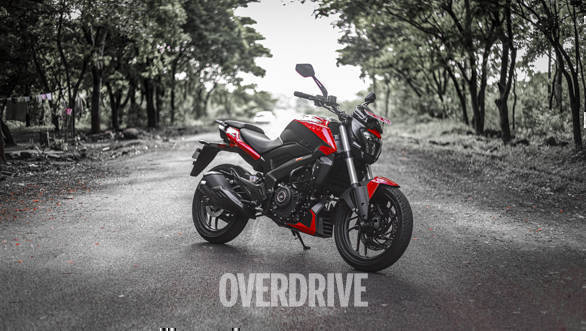 While the larger sibling rides on 110/70R17(F) and 150/60R17(R) radial tyres, the 250 comes with 100/80R17(F) and 130/70R17(R) MRF Zappers. The rear tyre looks a tad too skinny and does not go well with that over muscular stance of the Dominar 250, which makes it feels like the Dominar missed all the leg sessions at the gym. We strongly suggest upgrading to the larger MRFs of the D400, which will not only make it look right but also ride better. More on that in the later section. 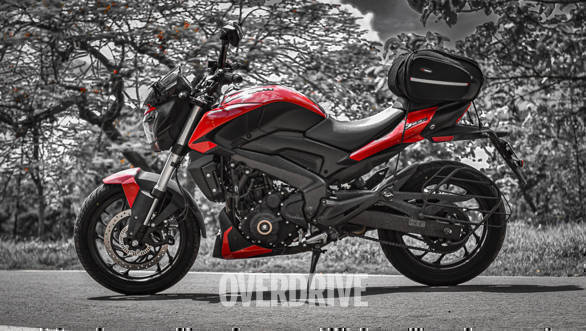 The rest of the features list which includes all-LED lighting, muscular 13-litre fuel tank with tank pads, split instrumentation with one on the conventional position and the other on the fuel tank, split seats, dual barrel exhaust and also the underseat nylon loops for carrying tail bag have been carried over. Also, in terms of dimensions, both the motorcycles are identical. What really works in favour of the Dominar versus some of its rivals in the country is its powerful street presence that gets a lot of attention for its form and style. 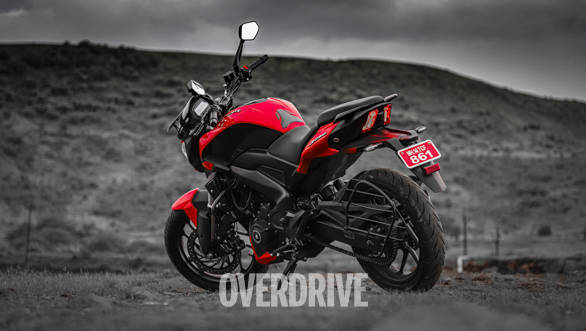 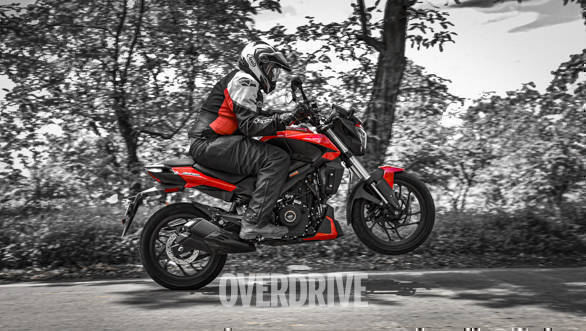 While the bore and stroke of this engine is identical to the 250cc unit used in the KTM Duke 250 and the Husqvarna Vitpilen and Svartpilen 250s, the tuning has been kept different with a difference in compression ratios, 11.9 in Dominar 250 vs 12.5 in KTMs . Also, unlike the KTMs, Bajaj's version of the 250cc is offered with twin-spark technology. 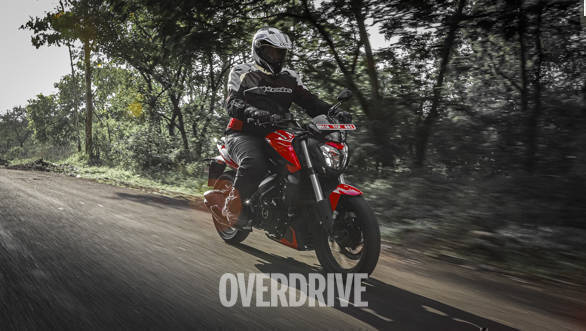 First thing that you realise when you get that motor running is the bass heavy exhaust note, which does give it a big bike-like feel. Getting off from the standstill might not feel as energetic as on the KTM because of the state of tune and also the difference in weight, but saying that, once in motion, the linear performance of the engine will ensure that you are commuting comfortably. If you are a power hungry rider, this might not cut it for you but then for a first time rider or for someone who's upgrading from a commuter, it is adequate. In terms of acceleration, the Dominar 250 takes 4.1s to reach a speed of 60kmph and 10.91s for 100kmph, from standstill. 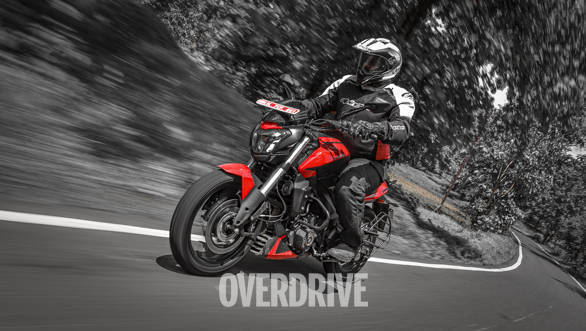 Impressively, the engine feels at its element all throughout in the 4,000-10,000rpm range. At higher speeds, the engine becomes more vocal but without any vibrations. This is essentially Dominar 250's sweet comfort zone where it can be in all day long. The moment you are on an open stretch of tarmac, you realise that the 250cc engine can do more than just commuting as reaching triple digit speeds is not a task. And at speeds of upto 110-120kmph, it feels reasonably smooth. However, once the engine crosses the 8,500rpm mark, the vibrations become evident on the handlebar and also on the footrests. The redline of the motor is set at 10,500rpm. Shifting through gears in the city was a breeze, thanks to the smooth shifting gearbox. In our test, the Dominar 250 returned an efficiency of 44.53kmpl in the city and 37.61kmpl on the highway. 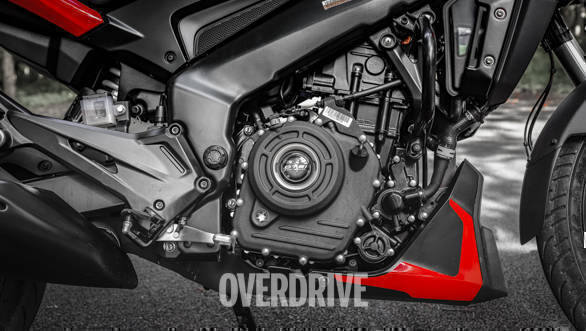 The D250 comes with 37mm USD forks with mono shock in the rear with 110mm travel. Though the front USD forks are narrower than that of the Dominar 400, the suspension tuning has been left unchanged. That paired with the 7kg lower weight of 180kg works in favour of the 250. In comparison to the 400, the D250 feels lighter to steer around while cutting through traffic. Ride over bumps or accidentally enter potholes and the setup will effectively take care of it . The ride quality feels plush all throughout and is one of Dominar's strongest highlights. The same is felt on the highways as well, wherein the undulations are neatly ironed out, delivering a fatigue free ride experience at both lower and higher speeds. 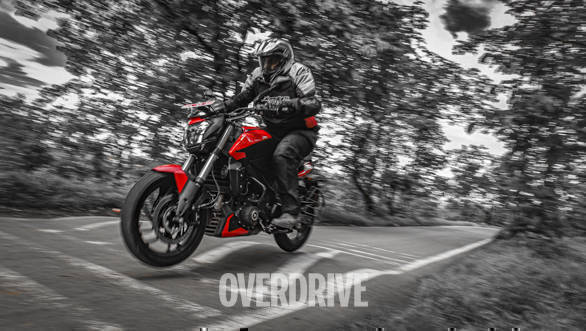 Saying that, it clearly does not enjoy sudden turns, where its hefty form gets highlighted. Coming to the narrower tyres which, we believe, intend to deliver a higher efficiency, don't offer sufficient confidence when it comes to high speed cornering, compared to the D400. This clearly is not a deal breaker if straight line stability is higher up in your preference list, but with an tyres upgrade which could set you back by Rs 8,000 for a set, the ride quality can feel noticeably better. 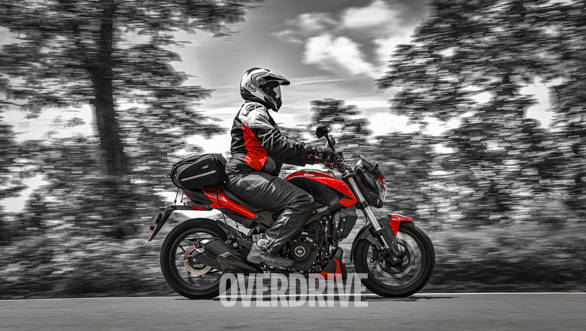 Braking performance is impressive as it does not take much effort to bring the motorcycle to a standstill. During our test runs, the D250 took 3.89s and 39.76m to come to a standstill from 80kmph and 5.24s and 65.74km from 100kmph.

Bajaj Auto tells us that even though the Dominar 400 has its unique power cruiser positioning and pricing to its favour, the fact that it has a larger engine makes most first time buyers shy away from it. And that is where the Dominar 250 comes into the picture, with all the goodies of the larger sibling but at an accessible price and higher efficiency, making it a more practical option. 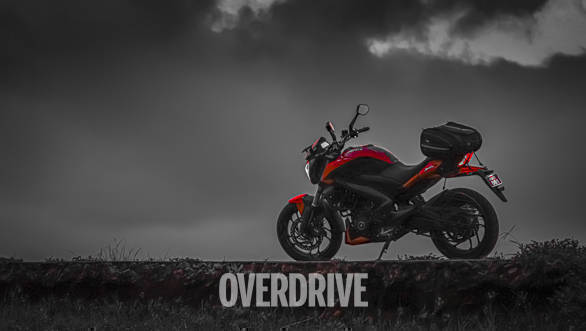 Priced at Rs. 1.60 lakh, ex-showroom, the D250 is almost Rs 35,000 more affordable than the D400. Importantly, with this pricing, the Dominar 250 is the most affordable 200cc+ motorcycle on sale in India. Why should you buy it? If you are looking for an upgrade from your existing commuter or are a first time buyer, the Dominar 250 does come across as a value for money offering with its overall package. 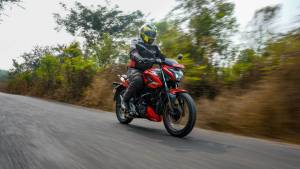 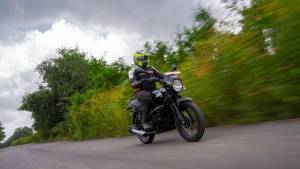 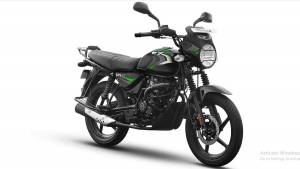