Whenever the history of the Indian automobile industry is written, the Maruti Suzuki WagonR will be cited as one the biggest successes. Critics may have called it boxy, dull and utilitarian, not fun-to-drive and what not. But it proved them all wrong and with its simplistic approach, terrific functionality and gratifying space and affordability, the WagonR has become one of the favourite urban cars of our consumers. The latest new generation Wagon-R model that was launched just recently at a starting price of 4.19 lakhs (ex-showroom Delhi) , not only consolidates and enhances on all its core qualities, but also offers new and smarter styling, better driving dynamics and a lot more.

The new Maruti WagonR is based on the Heartect platform, which means it has the same architecture as its siblings, the Swift, Baleno, Ignis, etc. The Heartect platform is not only much lighter for better performance and fuel efficiency, but it's also stronger and more rigid for superior safety, handling and also ride comfort. 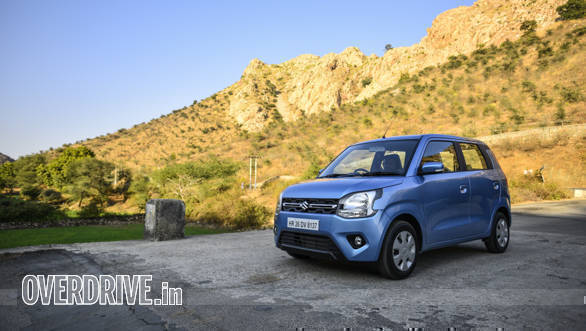 The new WagonR is longer (3655 mm), taller (1675 mm) and more importantly, also wider (1620 mm) than the outgoing model. The additional width gives it a better stance and frankly, the Maruti designers have done splendidly well with the metamorphosis of the new WagonR. While its retains the practical tall-boy design and the inherent proportions and profile, all the simple and straight lines with the sharp edges have been smoothened out; there is a welcome fluency in the styling language and the tautness conveys both strength and a newly created character. This well-groomed latest personality of the WagonR, is also well dressed with spearhead like dual headlamps, prominently sculptured shoulder lines, flared wheel arches, a slim grille with an energy streaming like structure and tall taillights that suggest the tail is shorter than it actually is. The floating roof further aids in concealing the height of this tall-boy a bit. While the redesign is truly commendable, I wish the doors had some more contours, then one could also state, the styling is genuinely well-rounded. 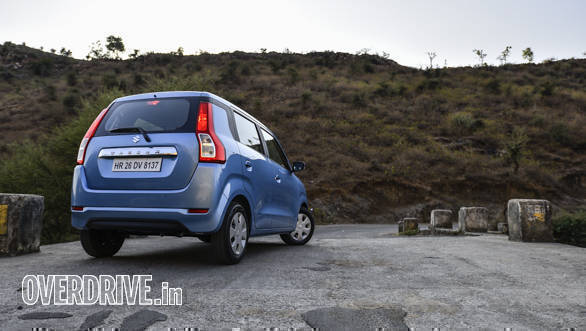 Step inside and the first thing you notice is that the ingress (and egress) continues to be outstanding, if not better. The huge amount of headroom, which has always been there, is still so welcoming. The sense of airiness that distinguishes the WagonR's cabin from others is most agreeable too. 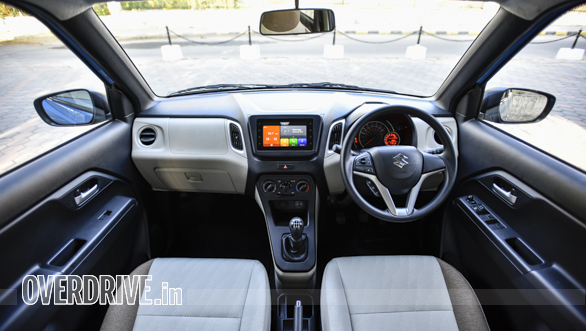 The additional width has also helped the designers develop more space and no longer do you rub shoulders with the passenger. In fact the entire passenger compartment comes across as more spacious and comfortable and it looks smarter too. The beige and black interior combination brightens things up and the eyes are instantly drawn to the new touchscreen, which Maruti describes as a 'Smartplay Studio'. India's largest car manufacturer says the interface is customizable and connects to the Cloud. 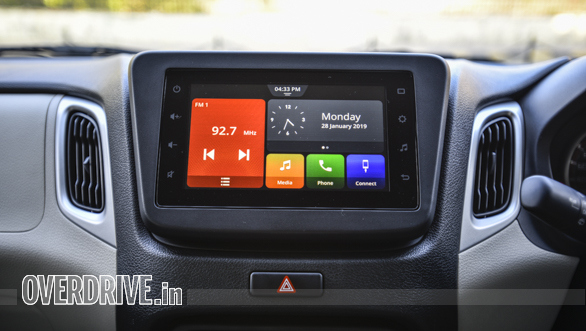 They claim from phone charging to real-time traffic updates and news, it's loaded with top of the line features. This 'Smartplay Studio' has a very useful and impressive looking graphic for instantaneous fuel economy, range, etc. It has vehicle alerts that keep you informed of  door open, parking brake, seat belt and low fuel. It also has a display with a cool clock and the day and date. The integrated reverse parking sensors have a smart graphic display too. The top-end variants come with a colourful instrument cluster with a huge round speedometer with a smaller digital rpm meter, placed alongside. Interestingly, the trip meter is operated by a push button lever, a good old mechanical touch. 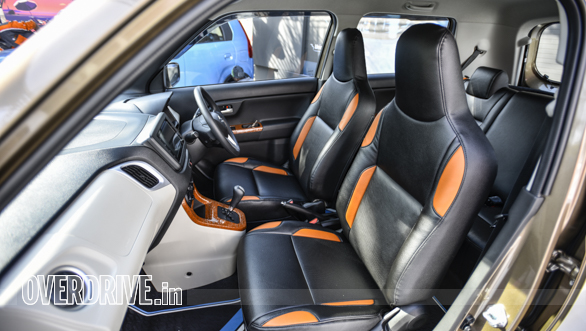 The three-spoke steering wheel has a nice sporty feel, but I find the A/C vents completely mismatched and unaesthetic. The ones at the two ends of the dashboard are round, while the ones in between are almost rectangular and placed vertically! Some of the plastics could have been better, especially the switches for the power windows and the knob for adjusting the ORVM's, also feels a tad flimsy. The seats are decent, but not as comfortable or supportive as you may want, if you plan on spending long hours in them. The space is really nice though, with the rear seat having benefitted most due to the larger dimensions of the new WagonR. Legroom has increased and with the extra width even three can sit more comfortably at the back. 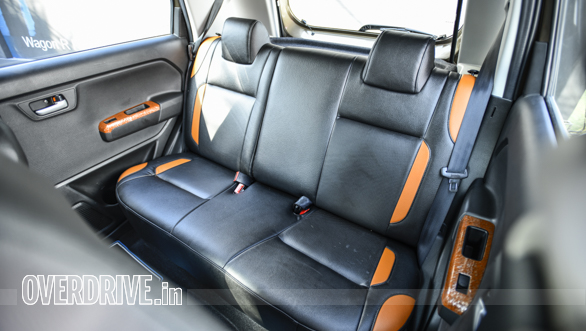 But the fixed headrests at the rear are way too short and provide no neck support whatsoever. It would really be much better if the new WagonR had adjustable headrests, particularly at the back. The boot capacity is more than before and can take in a fair amount of luggage and some variants offer seats with a 60:40 split, for more flexibility. But in an effort to lower the loading lip, which in any case is still knee high, the tailgate has become fairly tall and shorter people may find it a little difficult to shut. A handgrip on its inside would certainly make reaching up somewhat easier. 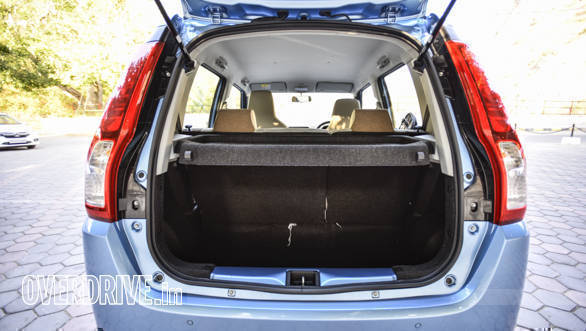 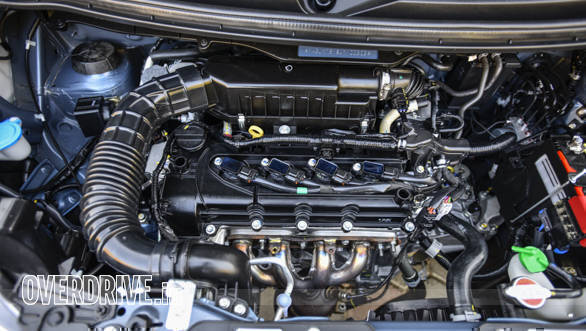 The new Maruti WagonR comes with two petrol engine options- a three-cylinder 1 litre making 68 PS and 90 Nm of torque and a four-cylinder 1.2 litre that produces 83 PS and 113Nm. Both engines are from Maruti's K-Series and do duty in various other models and most of you will be familiar with them. The bigger four cylinder unit is more refined and powerful, but we are aware that the three cylinder unit is fairly good too. 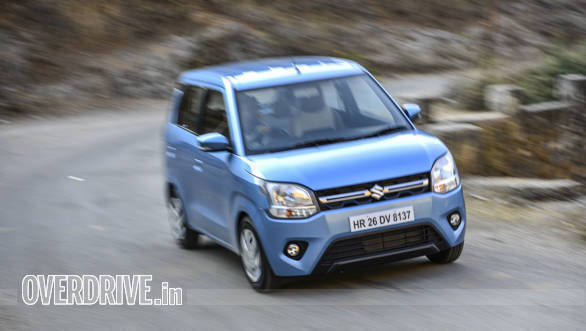 I drove the 1.2 and found the new Maruti Suzuki WagonR to be sprightly and responsive. It gets off the mark quickly with wheel spin if you dump the clutch, and the fact that it is lighter (845 kgs- ZXI-AGS) and has a better power to weight ratio, becomes apparent almost instantly. The new WagonR positively packs more punch than its predecessor and the fuel efficiency is said to be 21.5 kmpl, and for the 1.0 litre, 22.5 kmpl. When we properly road test it, we should have the real-life figures. 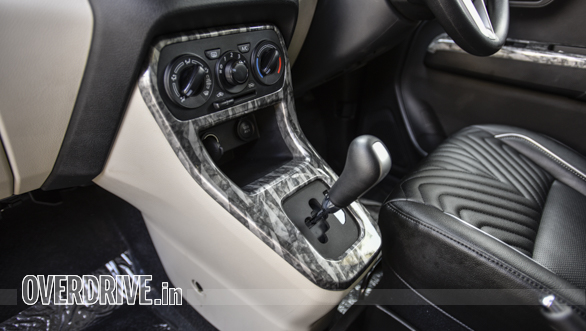 The gear shift action in the manual is light and fairly precise and my colleague Rohit, who drove the AGS (Auto Gear Shift) version, says it's quite good too, with fairly smooth and timely gear shifts and one should have no complaints in most urban driving conditions. Maruti has been constantly improving on the performance and set-up of their AGS systems, and its literally getting better with every new vehicle they introduce. 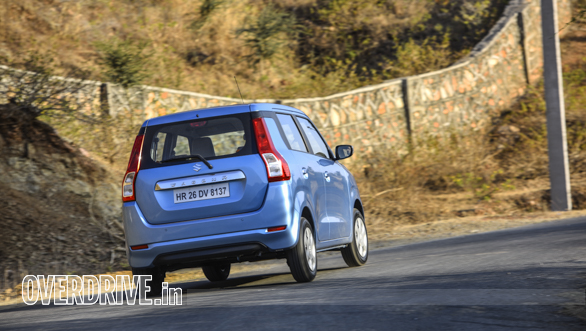 Coming back to the power plants, I think even the smaller 1.0 litre engine should be more than adequate for most consumers. In fact if you don't want to play street racer, something I strongly advise against anyway, then the 68 PS one should be your engine of choice, because when you compare the base models of both, the 1.0 litre is some Rs 70,000 cheaper, a substantial difference and saving. 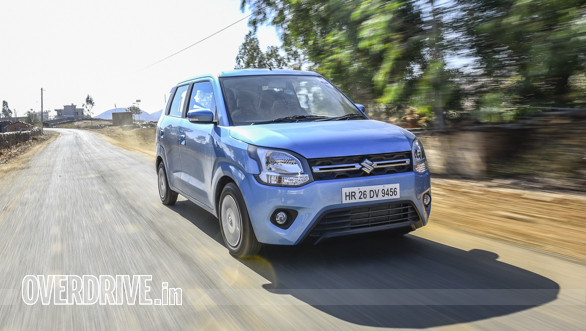 The moment you put the show on the road, the first thing that strikes you is how much better the new Maruti WagonR rides, and how much more assured it feels. The wider track, torsion beam suspension at the rear and the new stiffer platform has almost completely transformed the driving dynamics. Both the driver and passengers benefit from the changes with the WagonR feeling quite composed while going over broken patches and undulations in the road, and it even tackles the turns in a finer manner. 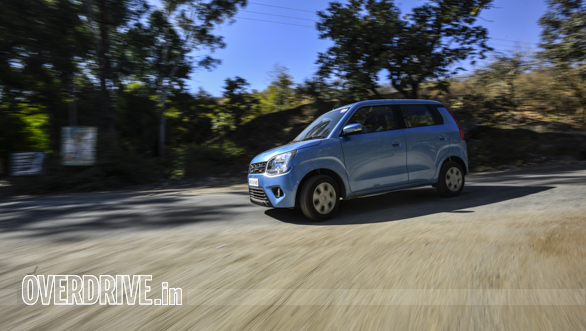 In the tall-boy WagonR you sit high and thanks to the low dash and short bonnet, frontal visibility is excellent and the ease of maneuverability makes driving the WagonR extremely easy, especially in the city. The brakes are a bit spongy, but have enough stopping power. ABS and drivers airbag are standard with the passenger airbag available on the top-end version and optional on others. The steering is light and a bit too over assisted for my liking, and it lacks the desired amount of feedback. Nevertheless, most regular users should be fine with it. 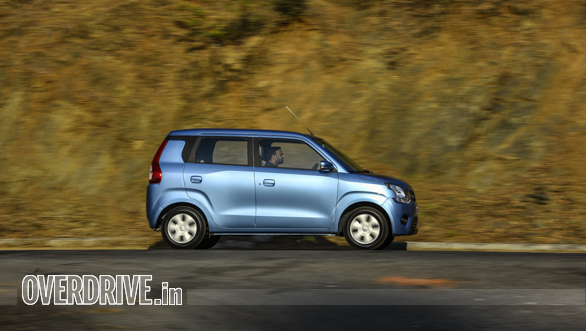 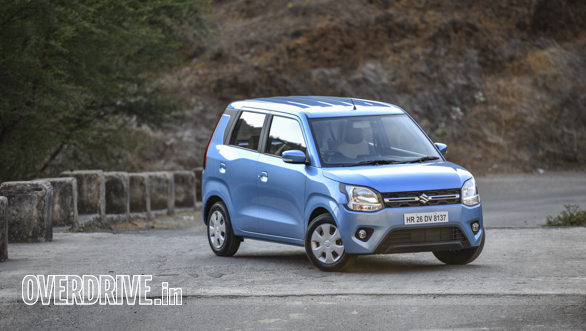 The new Maruti WagonR is strongly placed to continue pleasing even more Indian consumers. It has built on and amplified its fundamental strengths, while bettering in other areas too, and this makes it seriously worth considering.

Over 12,000 bookings for the third-gen Maruti Suzuki WagonR 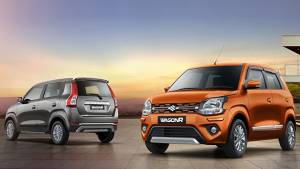