Remember the LFA, that absolutely nutter supercar that Lexus wowed the world with. I haven't driven that, I did get an opportunity some years ago, but skipped that for something else I thought was more spectacular. It is going to be one of my many regrets. Fast forward almost a decade, I'm sitting inside the LFA's spiritual successor, the LC 500h. This is currently the car that sits at the very pinnacle of Lexus's motoring pyramid, it is their flagship, their halo, their next hurrah! And, Lexus intends to bring the LC 500h to India in 2020. Expect the pricing to be obscene, I'd prudently not even bother to estimate where the LC 500h is going to sit, just understand it is going to be expensive, very expensive. So what is a very deep pocket going to get you? 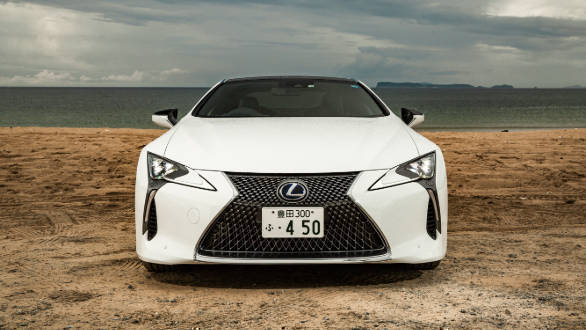 First off, there is that spiritual successor to the LFA bit. That sort of legacy is not to be trifled with. Lexus is known for making exemplary cars that are soft, luxurious and pandering. But when they do step out of their standard operating range and truly put their minds to it, they have come out with cars that are nothing short of magnificent. The LC sits in that space. It's even built like the LFA before it at the Motomachi plant, where skilled Takumi (Lexus master craftsmen) build each LC 500h in about two hours by hand (an RX, LX or ES takes approximately 18 minutes to roll off an assembly line from start to finish). So yes, there is an exceptional level of attention to detail presented in the LC 500h. 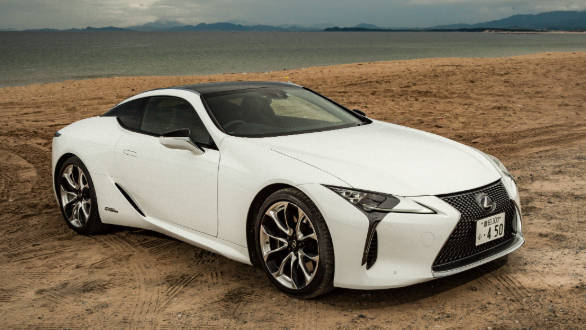 Then there is the design, I'm not sure what the language is called in Japanese, but the LC 500h stirs something deep within. The design theme of seduction and technology is definitely winning. There was a time when I thought the spindle nose grille was gross, and I still think some models could fare better without it. On the LC 500h, however, it stretches the imagination and gives it wings as it focusses the entire car around that front end in a spellbinding visual. It is a busy canvas, there is much going on at that front end, the honeycomb mesh of the grille that gets denser as you move from the lower splitter to the hood, the sharp crease running west to east across the grille, the LED projector lamp housing, there is much to absorb. But step back and look at the car as a whole and you begin to appreciate the spectacle. It has the stance of a Grand Tourer with the long hood, low slung bodywork, sharp distinct creases, large low profile tyred wheels, the coupe-like silhouette and the short overhangs playing the part to the 'T'. This is a car that would distinctly and appreciatively stand out in a field of other sports cars. 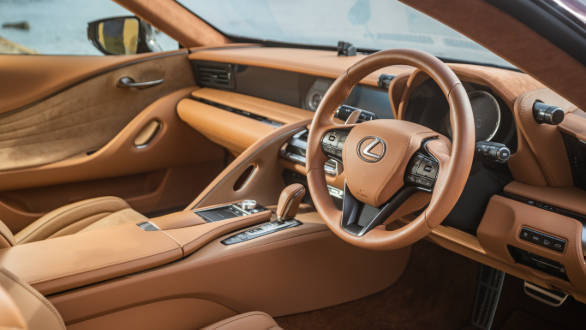 So you'd be seduced by the way she looks, what next? Is it going to blow your mind when you fire her up? Is it going to be memorable? Will you be craving for more? Herein lies my principle and only grouse. The LC 500h is a petrol hybrid called a Multi Stage Hybrid System, and it combines a 3.5-litre V6 engine with two electric motors. Now when you hit the starter button, all you get is some fancy graphical boot video on the instrument console and the infotainment screen. There is no sound of an engine firing up, no V6 engine reaching for its 7,200rpm redline. No aural indicator of any sort that a propulsion unit somewhere has come to life. Where is the drama? The LC 500h even starts off in electric mode, and if you gently roll off from a stationary position, as you would ordinarily do at a traffic light, the petrol motor wouldn't make an appearance until you mashed the throttle pedal to the floor. Then, of course, you hear the exhaust baffles letting off, it's a promising sound but it just does not stay on long enough, leaving you unsatisfied as the transmission climbs up through its ridiculous 10 speeds. 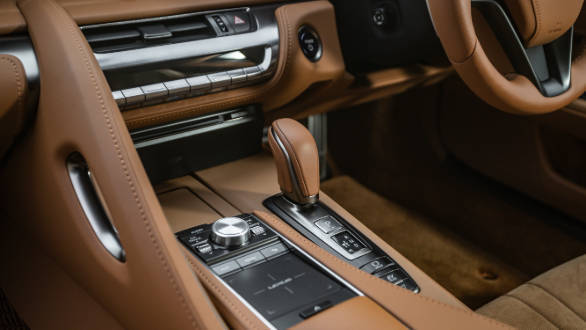 Speaking of the transmission, the one serving the LC 500h has to be one of the most complicated transmissions to ever grace a car. It took an hour and a few shots of Japan's finest pure malts before Lexus's chief engineer, Muto san, could drill its principle into our heads. I'm not going to try to explain it back to you but in essence, it is a hybrid system that is a combination of a 4-speed automatic transmission embedded within a CVT lending the driver 10 selectable gears to go through. What this essentially does is provides the efficiency of a CVT with the rubber band effect being dispelled by the automatic transmission. It also helps Lexus meet critical emission and efficiency regulations in various markets. 10 ratios though is quite a bit to sift through. However, the beauty of this gearbox is that you can comfortably sit in 10th gear with the engine ticking over at 2,000rpm and the speedo needle lingering around the 80kmph mark. Shift response is quick, but I don't ever see a situation where the 10th gear would be engaged. On my drive, I was happy enough using the first five and though I did engage the 10th ratio, I just don't see the use! 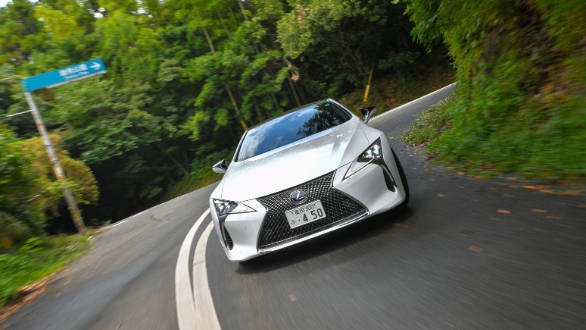 Performance from the LC 500h, however, is as electric as it comes. With four pre-set driving modes and a customisable mode, you can choose to do different things with your LC 500h. Best leave it in Sport+ mode, which quickens throttle response, stiffens up the suspension, adds some weight to the steering and opens up the pipes! And the LC 500h is quick, rapidly racking up triple-digit speeds. The LC 500h is impressively nimble too, in a seamless manner that is characteristic of grand tourers everywhere. They have a precision and quickness to them that is just a shade south of manic and frenzied. And that is perhaps what I found most endearing about the LC 500h, it's a car that you could drive as easily and comfortably as a Camry, but turn that gorgeous drive selector knob and you've got instant nirvana!

Big for the LC 500h is its Dynamic Rear Steering which provides a modicum of control over the direction of the rear wheels. This enables greater low-speed manoeuvrability and enhances directional precision and stability at higher speeds. What I'd like to explore at some point in the future is just what the rear-wheel steer does to opposite lock!

Nonetheless, the LC 500h is beautifully balanced, by virtue of its low centre of gravity, better weight distribution between front to rear and lower overall mass brought about by its GA-L (Global Architecture  Luxury) platform. This platform, part of the Toyota New Global Architecture platform is a modular unibody platform that underpins front, rear and all-wheel drive vehicles. The LC 500h is a front-engine, rear-wheel drive powertrain with the battery powering the electric motors of the hybrid system sitting just behind the rear seat and above the fuel tank. This not just distributes the weight evenly but also helps lower the centre of gravity in the LC 500h. 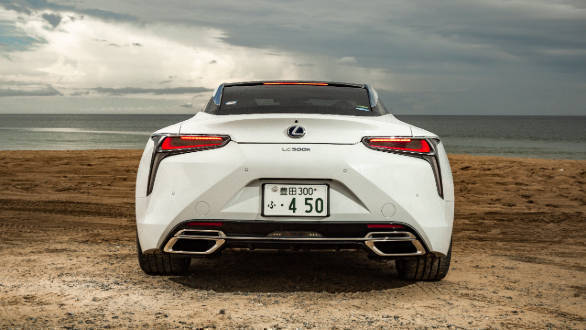 The LC 500h sits on a double-joint multilink suspension system that uses linear solenoid monotube shocks in an Adaptive Variable suspension system that varies the ride and handling characteristic. In comfort mode, the dampers do a pretty job of isolating the cabin from any road imperfections. In Sport+, they stiffen up considerably and keep the LC 500h in line. The LC 500h also has a Torsen high-capacity torque-sensing limited-slip differential that distributes power evenly to the rear wheels. All of this works to give it confidence on the road. On some of the twisty sections pushing the LC 500h as hard as the roads would allow it, barely made it break into a sweat. It is relaxed, sublime even, and the LC 500h simply flowed from one corner to the next. However, I would have liked to drive this car in an entirely different part of the world, where speed limits weren't as restrictive, so I could push and explore its limits a little further and see just how much sharper it can get! One bugbear is the brakes which because of the regenerative braking system, don't have the feel and bite of a conventional braking system. 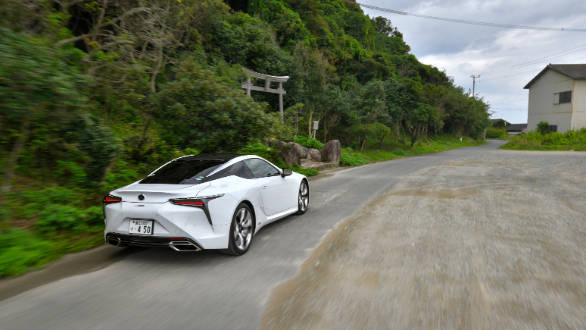 The LC 500h makes a compelling case for itself, Lexus India's only challenge would be getting the price to an acceptable level without losing the plot. As a Grand Tourer it makes a fantastic case for itself, certainly don't approach it as a sports car. 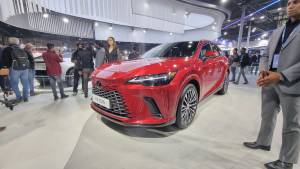 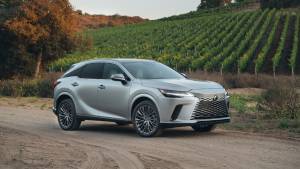 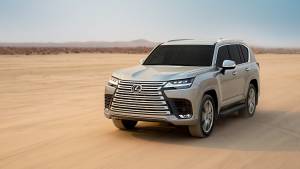