The Ducati Multistrada Enduro married the Multistrada 1200's manic, superbike-like performance to serious off-road abilities, making it a wholesome adventure tourer. And three years later the bike gets a comprehensive update, just like its road-biased sibling, the Ducati Multistrada 1260S. We got a chance to ride the updated Enduro in the very hills it was developed in, around Tuscany in Italy. Read on to find out how the bike feels on- and off-road. 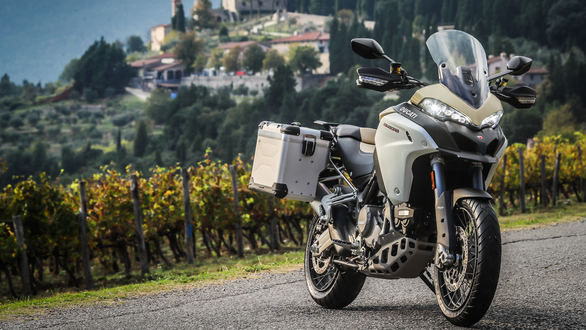 The Ducati Enduro is a midlife update to the full-sized, on and off-road adventure tourer and bring with its a host of mechanical updates

The biggest change is the 1,262cc, Testastretta DVT V-twin engine. It is in the exact same state of tune as the Multistrada 1260 and offers 158PS and 128Nm. As is the case with its road-biased sibling, the increment sounds modest but the bigger picture here is the improved performance. The engine offers 85 percent of its peak torque output between 4,000 and 6,000rpm. To give you a perspective, we're talking about offering the peak torque of a litre-class superbike, just 4,000rpm onwards, which sounds crazy! Throttle response has been smoothened further to let you put all the power down easily. Of course, electronics have been tweaked as well. There's four riding modes, Sport, Touring, Urban and Enduro which can tailor your riding experience depending on the conditions. 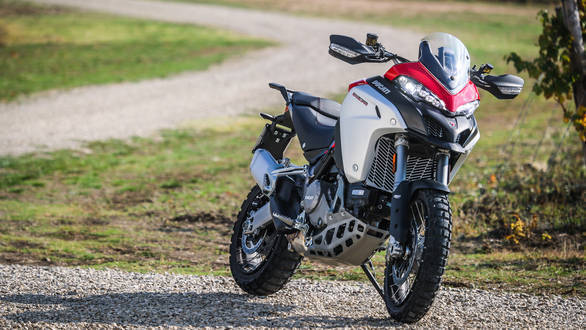 The Ducati looks stunning in off-road form thanks to its Pirelli Scorpion Rally tyres, the short windscreen as also its bright red hue

A six-axis IMU from Bosch has been thrown into the mix now, while the Vehicle Hold Control system has been carried over. The system is just like the hill hold function in SUVs. All you need to do to activate it is apply additional pressure on either brake lever and VHC will apply the brakes for up to 9 second - this is a really cool and helpful feature and will help particularly if you stall the bike on steep inclines. The 1260 Enduro also sports the same, updated 5 inch TFT display as the 1260 now which has a higher resolution, brighter colours and also offers information in a clearer format on the go. Switchgear on the left handlebar integrates a dedicated switch for adjusting the suspension for various load conditions now. The 1260 Enduro also comes equipped with the Ducati Link app which lets you record your trips and performance and share them with friends. But more importantly, the app lets you customise almost of the bike's settings including riding modes remotely via your mobile phone.

The 1260 Enduro also gets a bi-directional quickshifter which Ducati claims is particularly helpful off-road. Thanks to the updates, the electronics suite on the 1260 Enduro is one of the most advanced ones in the segment now and the display also offers detailed views of what some of the important changes bring about to the motorcycle with an infographic. For instance, changing wheelie control, traction control levels now tells you the effect it has on the motorcycle, along with a bar at the bottom, depicting whether you're moving towards more performance or better safety. 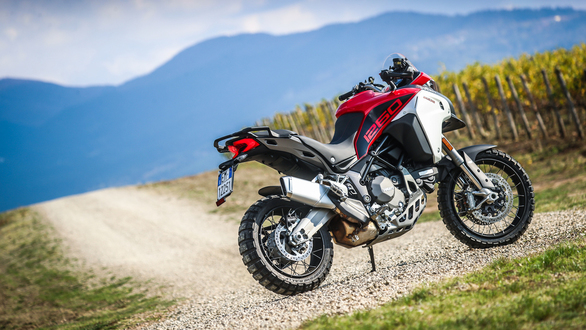 There's a long list of mechanical updates too. Wheels are lighter thanks to redesigned, lighter hubs and the 1260 Enduro runs on spoked wheels shod with tubeless tyres. The swingarm has been redesigned and is also lighter, apart from which the oil sump is lighter too. All these would translate to a drop in overall weight, but the 1260 Enduro's weight is the same as the 1200 at 254kg. Stefano Tarabusi, Product manager for the Multistrada also let me in on a little secret that wasn't mentioned in the product presentations, which is the fact that the exhaust end can is now longer to meet Euro IV emissions and aid the improved performance, which, apart from the heavier engine has contributed to the weight. The trail has been increased by 1mm to 111mm and the DSS Evo (Ducati Skyhook Suspension) has been recalibrated too, to improve ride and handling and also offer better feedback than before. 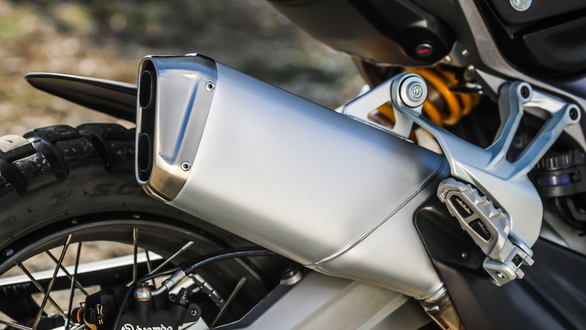 The revised suspension has helped improve the bike's payload by 20kg, up to 231kg. The 1260 Enduro runs the same 19 inch front, 17 inch rear wheel setup as before, which, as we know offers a good balance between on- and off-road handling. The first and final gear ratios have been shortened  the former aids rideability off-road. Oil change interval is 15,000km while Desmo service including valve clearance check is at 30,000km and Ducati tells us the engine development team is a lot prouder of these numbers than the engine's outputs as that should translate to a better ownership experience. Brakes are top drawer Brembo units, with the 1260 Enduro running a radial master cylinder and radially mounted M4.32 piston Monobloc calipers that grip twin 320mm discs upfront. The rear brake unit uses a 265mm disc gripped by 2-piston Brembo floating caliper.

Most importantly ergonomics have been improved  at 860mm the standard seat is 10mm lower while the handlebar is 30mm lower. Tank panels have been redesigned to offer better grip, especially when standing up on the footpegs, which are 10mm lower. The centre of gravity is thus lower, which aids handling on tarmac and off it too. There's new graphics on the fuel tank with 1260 writ large diagonally across the side panels. The aluminium side wing of the fairing has been carried over as is, which Ducati says is a trademark identity of the Enduro.

We rode the bike off-road on trails around the Nipozzano castle which is home to the DRE Enduro academy in the company of Beppe Gualini, head of the academy and a man who has competed ten times in the original Paris-Dakar rally. The off-road session had us ride the 1260 Enduro shod with Pirelli's Scorpion Rally tyres and a short windscreen upfront. After a jittery first few minutes I realised the 1260 Enduro wasn't terrifyingly scary to ride, despite my limited trail riding experience. The smooth throttle response was a big help, helping me get rid of my apprehensiveness of losing the rear on rocks, loose gravel and the wet soil that had become slimy due to some rain the previous night. 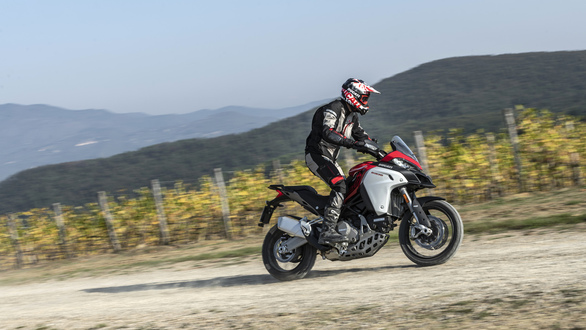 The traction control system on the Ducati Multistrada 1260 Enduro lets you slide the rear at will, and doesn't cut engine power abruptly when it kicks in

We rode about 60km off-road, which included specially created dirt tracks, inclines, slopes and more, all of which are used to train riders in the Enduro academy. The 1260 felt extremely confident throughout, particularly thanks to the excellent feedback from both ends. Traction control in Enduro mode lets you slide the rear very easily without being too intrusive and also cuts power smoothly when the IMU senses the slide is getting out of hand, which makes the bike extremely friendly to ride and slide both. The lower handlebar offers better leverage as well, thereby affording greater confidence when steering on tricky surfaces like loose gravel. My biggest takeaway from the session though was that the 1260 Enduro does not feel terrifyingly large once you start riding and build up speeds off-tarmac and feels surprisingly nimble. It's almost as if the bike puts an arm around your shoulder like a good friend, and eggs you to go faster with the confidence levels it offers. 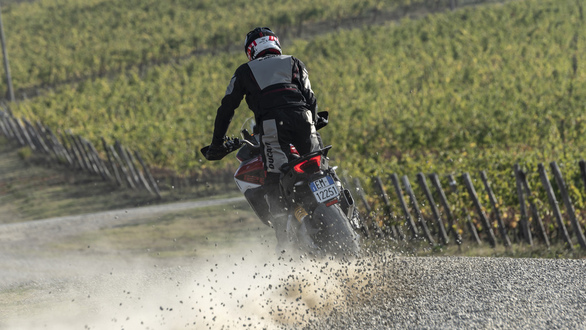 I recently did a 1,400km ride on the Multistrada 1260S, riding it from Delhi to Mumbai and I was pleasantly surprised to note that on tarmac the 1260 Enduro's handling is startlingly close. And that's despite the larger 19 inch front wheel. Ducati tells us that's exactly what the intent of the development team was  to make the 1260 Enduro a better road bike. I was told very few Enduro buyers actually do serious off-roading on their bikes, though most want a bike that looks off-road worthy and also boasts serious off-road abilities. The recalibrated semi-active electronically controlled suspension works excellently in adjusting damping real time and makes leaning hard into fast corners a cinch, as I found out on the well-paved, traffic-free roads in Tuscany. 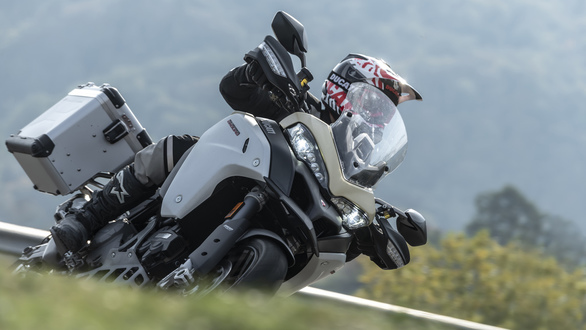 The road bikes were shod with Pirelli Scorpion Trail II tyres which offered excellent grip levels, even on cold, damp asphalt. With the sun playing hide and seek throughout, the roads were not particularly grippy but the tyres afforded ample confidence, even under hard braking which speaks a lot for a motorcycle that's been developed for off-road riding primarily. We barely encountered any straight sections throughout our 125km ride and most of the time was spent accelerating hard out of corners, braking hard for the next one and leaning hard again, and the 1260 Enduro didn't let me down with its corner carving abilities. 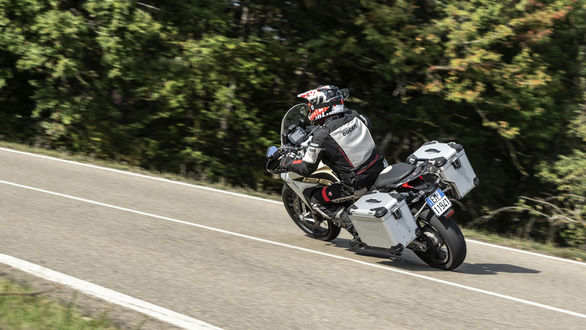 Comfort is excellent thanks to the upright, relaxed ergonomics. The windscreen is the same as the Multistrada 1260 which offers ample wind protection and can be lowered or raised on the go manually. Touring mode offered the full 158PS from the engine but in a softer manner, while Sport was the full-ballistic experience with the 1260 Enduro displaying an immense urgency to build speeds. With its franticness the 1260 Enduro can show a clean pair of heels to many a sportsbike in fact, and it proves the fact that Ducati makes some seriously quick road bikes, yet again. What's more, the 1260 Enduro continues to use a 30-litre fuel tank, which means fuel stops on long rides should be far and few in between. 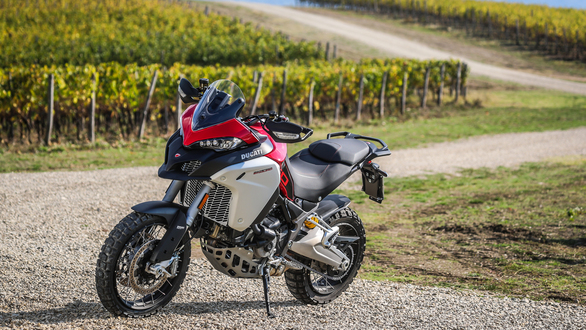 The Ducati Multistrada 1260 Enduro ups the game set by its outgoing version with better abilities on and off-road both, making it a better package for someone wanting to go globe-trotting on two wheels

For what essentially is a midlife update, the Multistrada 1260 Enduro ups its game a couple of notches. Engine performance is excellent, on and off-road, while the revised gearing and quick shifter help immensely. I actually found the quick shifter to be of greater use off-tarmac as it allowed me to focus on the surface ahead better, thereby letting me plan better. So while it is adds to the sportier feel on tarmac, the quick shifter is more of a convenience feature off-road. Our day out on the bike in both forms  on and off-road  gave me little chance to complain about, be it the suspension or the rider aids and if anything, the 1260 Enduro is an even more capable, well-rounded full-sized adventure tourer. I expect it to command a small premium over the 1200 Enduro's price (Rs 18 lakh ex-showroom) when it comes to India, around April 2019. And when it does, the 1260 Enduro is a machine that must feature on your shopping list, if looking for a motorcycle to go on a transcontinental ride. 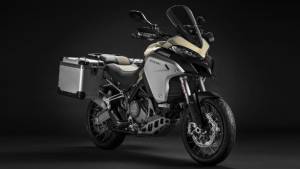 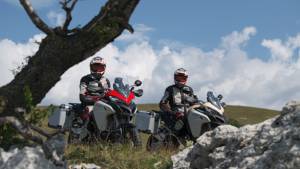