Coupé SUVs are a bit of an oddball, aren't they? They certainly aren't as pleasing to the eye as their conventional boxier siblings, that they are usually based on. It is no wonder then that we haven't seen too many of them on the road yet, despite the SUV boom. But there are certainly a sizeable number of takers for this body style to warrant their existence and continued development. The BMW X6 kick-started this genre about a decade ago, but back then it was all lumpy and looked bloated. But the coupé crossovers that have followed over the years have become more muscular bodywork and in today's scheme of things, they appear like the sportier, fastback variants of the SUVs or crossovers that they are based on. 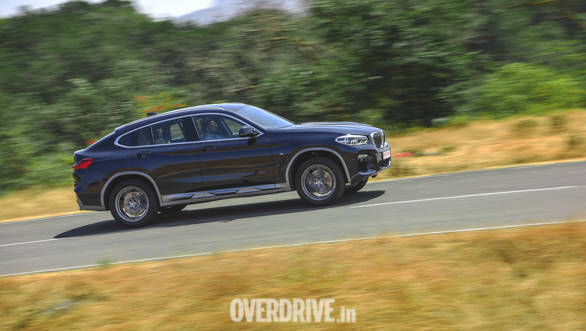 This is the X4's first outing in the Indian market. The first-gen model was in existence from 2015 to 2018 in the global market. The second-Gen model seen here is based on BMW's new CLAR underpinnings

Design
The new X4, in particular, looks quite athletic - more so because it isn't as large as the X6 or as small as any of the entry-level luxury compacts. The X4 not a new nameplate, but the first generation model only lasted three years. What you see here is an all-new X4 based on the new X3, which by itself is a very capable car and a handsome one at that. Like the X3, 5 Series and the 7er, the X4 too is built on the BMW CLAR architecture, which has helped it lose weight, and appear sleeker than the model it replaces. The attention to detail makes it appear distinctive from every angle and elements like the grey inserts in the front bumper, the sculpted rocker panels which look butch, and a matching design for the roof spoiler, contribute to that effect. 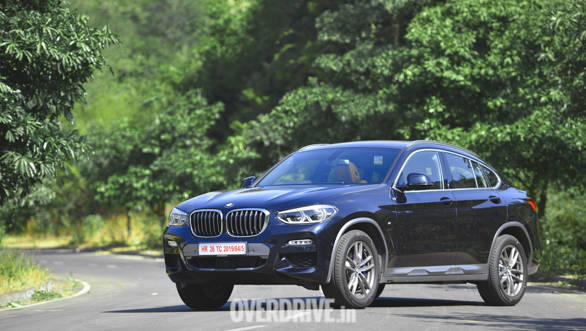 Visually, the X4 is much sleeker than the X6 and the M Sport trim is tastefully executed on it

BMW is offering the X4 in a choice of four colours. I happened to spot the white, which is a popular shade amongst luxury cars, but it doesn't really cut it for the X4. It makes it look more like a competitor to the Volvo S60 Cross Country - a sedan on stilts. The X4 is not that, it's a lot sportier in intent and that is highlighted only in the dark shade you see here, or the sporty red or blue. Those colours also highlight the sharp lines of the X4. The straight, pinched creases on the side give the design a sense of forward motion, while the sharp taillights, the sleek diffuser and the inset reflectors tilt the X4 more towards BMW's sportscar designs than the SUVs. 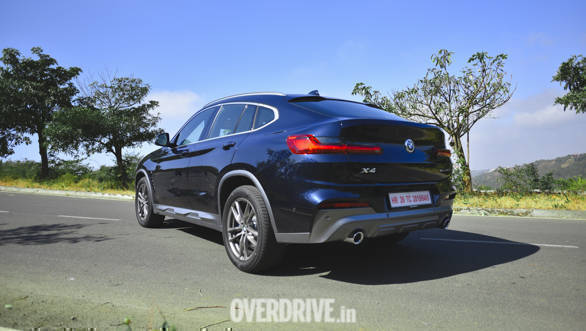 The tail is nothing like BMW's typical 'X' design. The trademark hammer-shaped taillights are replaced with these sleek units that have hints of the i8's rear end to it

In India, BMW is offering the X4 only in the M Sport trim, which is good news in my books. It bumps up the aggression in the bodywork, brings with it the blue brake callipers and peppers the car with the M badges all around, contributing further to the sporty stance of the X4. 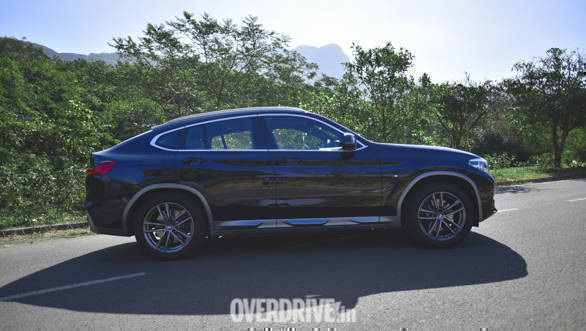 The X4 has better aerodynamics than the X3, thanks to the fastback body style

Cabin, practicality, and safety
The cabin is welcoming like most new-age BMWs, though a bit tighter than the X3, as expected. This is a driver's car and in the typical BMW fashion, the dashboard and all the controls are driver-centric. The infotainment is crisp and rich in colours and one of the easiest to use and understand. I also like the choice of materials and the colour options inside the cabin. It has a sportier, youthful appeal to it. The rear seat space isn't meant to appeal the chauffeur-driven kind and it is evident in the smaller under-thigh support. The coupé roofline does rob the rear seat of some headroom, and taller people could find it cumbersome. The legroom and foot space are adequate and the angle of recline for the rear seats can be adjusted on either end for better long distance comfort. I had been ferrying a family of two adults and a kid in the X4 and they didn't complain of any discomfort even over 100km long journeys. 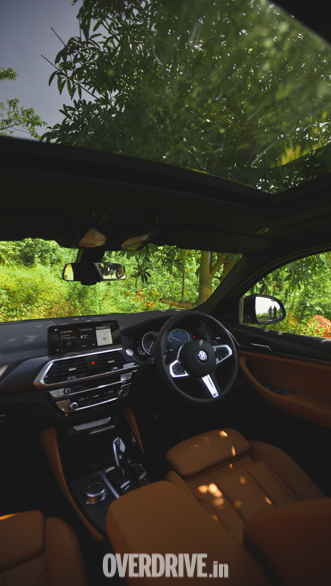 Despite being tighter than the X3, the cabin of the X4 has an airy feel to it

The cabin has three-zone climate control, a panoramic sunroof, wireless charging, and a Harmon Kardon audio unit to pamper the occupants. Safety of the cabin is ensured by eight airbags, and a host of active safety techs like ABS with EBD and cornering brake control, traction and stability control, and run-flat tyres. 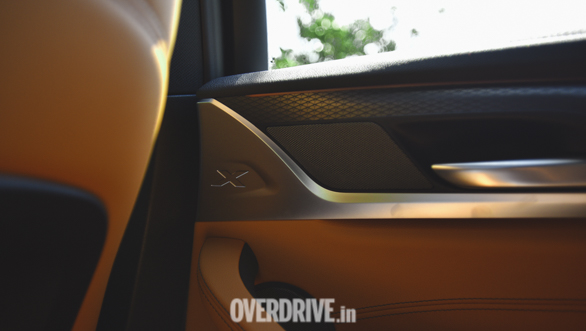 I like attention to detail and I also being reminded of the investments I have made. The X badging embossed on the hidden end of the door-pad, only to be revealed upon opening the door, is a nice touch 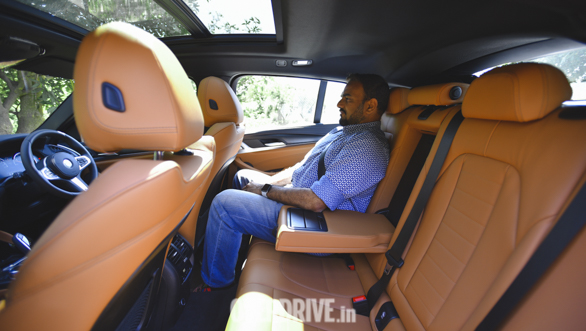 The headroom was adequate for me, but for taller passengers, the coupé roofline can be a bit of a concern. The X4 isn't for those who like to be chauffeured

Engine performance and dynamics
The BMW X4 comes with three engine options - two types of diesel (20d/30d) and one petrol (30i) - and all are powerful, torquey and efficient. But the one that complements the athletic stance of this car in more ways than one is the 3.0-litre diesel. It has an in-line six-cylinder configuration and a high degree of refinement, which makes it quite pleasing to the ear and very capable on the road. In fact, with a 265PS/620Nm tune, it is the quickest engine on offer on the X4 in India and its performance achieves the perfect balance between driving fun and a high degree of fuel efficiency. BMW claims a 0-100kmph time of 6.0s flat, but our test car went even quicker at 5.7s! To that effect, the X4 xDrive 30d also gets a launch control. Both the '30' badged variants come equipped with the sportier tune for the eight-speed automatic transmission, which further contributes to the driving fun with shorter shift times. 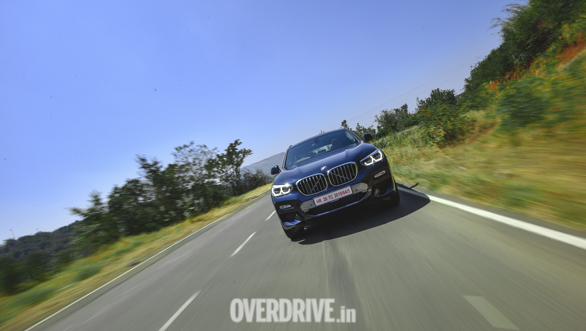 The 3.0l diesel is an absolute delight to drive! It was the missing link that had left us wanting for more when we drove the X3 last year

All variants of the X4 come with the xDrive AWD, which in typical BMW tune, is rear-biased. Add to it the electronic differential and the other BMW trait of a 50:50 weight distribution, and you have at your fingertips an SUV that goes around corners as fast as it looks. These dynamics had left us impressed in the new X3, and the X4 only pushes that envelope further. In fact, it also highlights that the X3 badly needs this 3.0-litre diesel to be as fun as the badge on the hood. 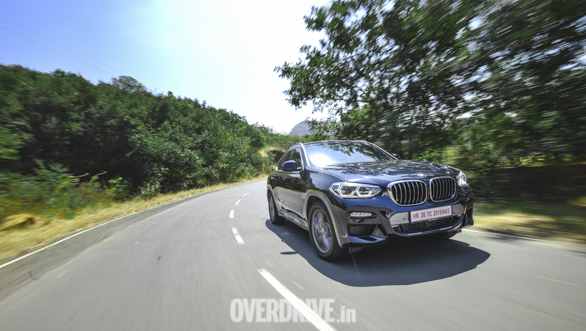 The X4 comes standard with a rear-biased all-wheel-drive, which along with the e-diff, ensure sharp turn-ins even at higher speeds

The steering isn't typical BMW though and could feel over-assisted at times, especially if you are driving in the comfort mode. Scroll up into the Sports mode for a quick fix. I'm particularly impressed with the braking manners of the X4. These are the most progressive brakes that I have experienced lately on a new-age BMW. It has finally managed to lose the inconsistent pedal feel that most new BMWs suffer from, due to the regenerative braking. The difference is particularly evident at crawling city speeds and triple-digit highway cruising. Speaking of which, the X4 manages to do everything as impressively as the new X3 - urban commutes, highway cruising, and corner carving - but bumps up the fun quotient with the lovely 3.0l engine. If I was shopping in the space, I would probably look no further than the X4. The dynamics of the X4 are superb. Though relatively softer than something like a 3 Series, the X4 doesn't make its tall height evident and almost feels as taut as most other 2+2 coupés

Verdict
I quite like the BMW X4, and for more reasons than one. It has most of the elements that I have liked across various BMW cars in the past couple of years. It has the gesture controls and the display key like the 7 Series, a flamboyant cabin like the 5 Series, reclining rear seats like the GTs, an exemplary performance from its 3.0l engine and the superb driving dynamics that I loved in the X3. It has quite a unique design too that turns heads wherever it goes. The X4 certainly deserves that attention and I think BMW has delivered an all-rounder here!