The recently launched Amaze marks a radical shift in Honda's approach to the compact sedan segment. The previous generation car was created by just like most other first-gen compact sedans, by slapping a boot onto an existing hatchback, the Brio in its case. But the second generation Honda Amaze has been thought through as a sedan from scratch, which Honda tells us makes it a lot more enticing. Does it? We tried to find that out through a comprehensive road test. 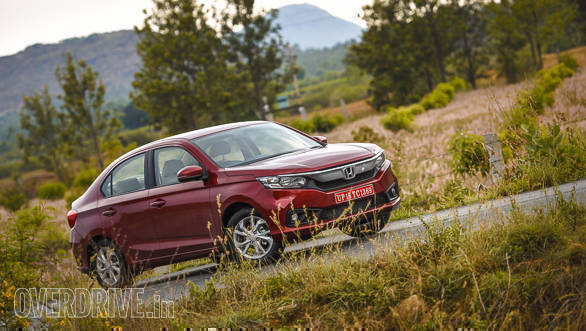 The 2018 Honda Amaze is very different from its predecessor, not just in terms of its design, but also the car's focus as a compact sedan 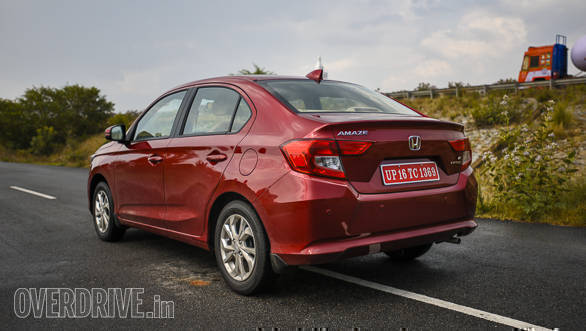 The 2018 Honda Amaze looks far more appealing from the rear than the last generation model, especially thanks to the fact that the boot design is a lot neater now

With customers getting increasingly style conscious, manufacturers are going the extra mile when designing compact sedans. And the new generation Honda Amaze is a great example. Its design may have received mixed reactions, especially the flat face, but I for one like the front end, though the grille is a little too thick for my liking. The headlamp design looks appealing and distinctive, though I wish the LED daytime running lamps were brighter. The boxy design has a slightly retro vibe to it, which has its own appeal. Most importantly the integration of the boot is a lot better, which makes for a far more appealing looking derriere.

The interiors of the new Amaze are a huge step-up. A lot of credit for that goes to the part-beige, part-black interiors. While the top of the dashboard is finished in black, its lower half and the seats are beige hued which makes for an airy and premium feel. The dash layout is simple yet elegant and the 7-inch touchscreen (only on offer in the top of the line VX variant) gets gloss black surrounds which makes it look larger. Quality of plastics could have been slightly better though. The cabin is spacious from behind the wheel, as the windscreen is placed far from the driver. Also, despite being a compact sedan there's enough room at the front for both passengers to move their arms around without making contact. 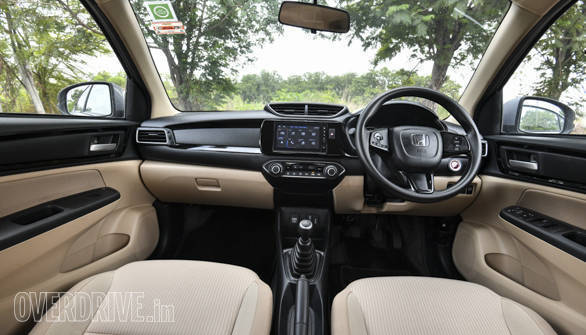 The new Amaze is also more spacious at the rear thanks to Honda pushing the front and rear wheels apart, which has helped in liberating additional leg and kneeroom. That said, headroom could have been better. Also, Honda has restricted travel of the front seats in terms of the fore and aft movement of the rail, to accentuate the sense of spaciousness at the rear, which means the front passenger cannot move his seat all the way back even if the rear bench is empty. The Amaze gets a central rear arm rest now that adds to comfort, but it still does not get rear air-conditioning vents, which is a miss.

The Honda Amaze VX comes equipped with a touchscreen as mentioned above and offers Apple CarPlay, Android Auto and Mirror Link connectivity. The VX version isn't on offer with an automatic transmission though, which means that if you choose to go in for the convenience of an automatic transmission you will have to make do with the more basic music system that does not get a touchscreen and only offers connectivity via Bluetooth. The VX variant also features creature comforts like automatic climate control, keyless entry, a start/stop button, reverse camera with parking sensors and auto up/down for the driver's window and is on par with the competition on this front. 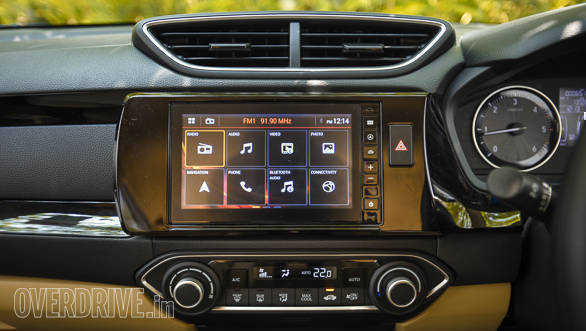 The top of the line, VX variant of the 2018 Honda Amaze offers Apple CarPlay, Android Auto and Mirror Link connectivity via a 7-inch touchscreen

We've only managed to lay our hands on the diesel engined equipped Amaze so far, which is powered by the same 1.5-litre, four-cylinder diesel engine as before. The engine also performs duty in cars like the Honda City, Honda WR-V and the Honda BR-V and offers 100PS and 200Nm. Honda claims to have improved NVH levels further, as the engine's noisiness has been a bit of an issue in the past. The Amaze diesel is thus one of the most powerful cars in the segment, but its engine isn't the most athletic when it comes to responses, and it feels laidback as compared to other cars in the segment. That said the car managed the 0-100kmph feat in 12.6 seconds in our acceleration tests, which is quick. 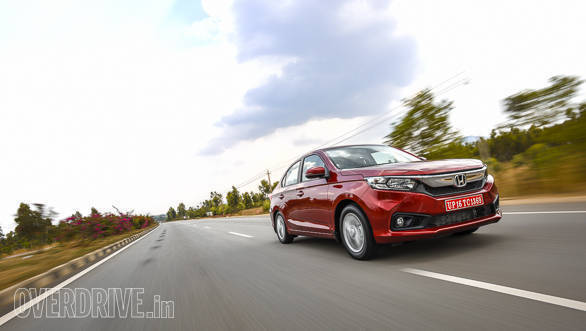 Responses from the 1.5-litre diesel engine under the hood of the 2018 Honda Amaze are laidback, but the car is one of the quickest accelerating compact sedans currently

The engine also feels smooth and refined though it still sounds clattery, especially at low revs. Some bit of engine noise finds its way into the cabin at higher speeds as well, though it never gets too loud. The manual transmission is the same five-speed gearbox as before and the ratios try to aid fuel efficiency rather than offer enthusiastic performance. The Amaze did return impressive fuel efficiency numbers (20.04kmpl in city and 24.63kmpl on the highway) in our tests which are some of the highest in the segment. Gears slot in well but the transmission has a rubbery feel and shift quality could have been slightly better. On the whole, the powertrain leans towards ease of driving and driver comfort a lot more than sportiness, which is pretty much in line with what a lot of compact sedan buyers look for, especially those wanting a family car. 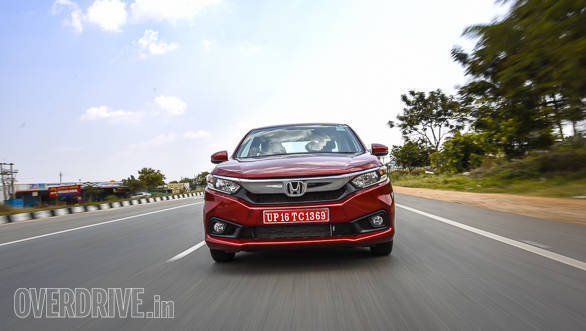 The softer suspension setup on the 2018 Honda Amaze offers a plush ride quality, but the ride comes at the expense of sporty handling

The suspension setup on the new Amaze echoes the aforementioned sentiment. It is soft and offers good ride quality, especially over bad roads and is perfectly at ease soaking up bumps, potholes, speed breakers and what not. The soft setup causes a fair bit of lateral movement for passengers though, which can be slightly disconcerting. The soft suspension also unsettles the car at speeds, apart from making for a fair bit of body roll around fast corners. On the positive side, I can see how comfortable the car will be for senior citizens and families, who are sure to appreciate the cabin's spaciousness and the plush ride. A slightly firmer setup would have offered a better balance between ride and handling though, as the current setup leans a bit too much towards passenger comfort. The steering also has a bit of a lag dialed in for the same purpose and its responses are thus not exactly direct. This should help benefit inexperienced drivers, though experienced drivers could be left wanting for a more direct feel. 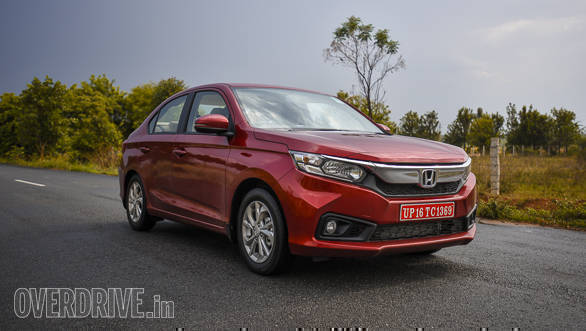 With its higher equipment levels, improved interior space and softer suspension setup the new generation Honda Amaze is clearly gunning to attract family car buyers more than the enthusiast. Spending a couple of days driving the car also helped me establish the fact that the Amaze is a big improvement over the outgoing version in almost every department, while also feeling more premium and upmarket. With that said, the new Amaze seems to be heading in a direction similar to its immediate sibling, the Honda City for a lot of reasons and certainly holds potential for Honda in the compact sedan segment, which is easily the most important segment for any mainstream car maker in the country today.

The Amaze also comes with the solid build quality Honda is known for and has a built to last feel  be it the solidarity with which it doors shut or the impressive paint quality, the new Amaze reiterates Honda's commitment to offering quality products. Going by sales numbers the Amaze is already doing well since its launch just a couple of months back. Of course, with prices beginning from Rs 5.6 lakh ex-showroom for the base petrol, the Honda Amaze does make a strong case for itself if in the market for a compact sedan. 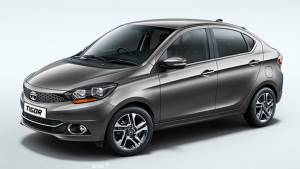 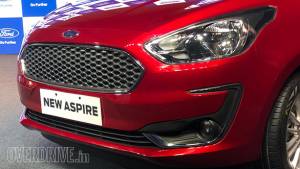