The new Ford EcoSport has been updated for 2018 with a more upmarket design along with additional features. But the highlight of the new EcoSport is what lies under the hood. In addition to the previous powertrains, the new EcoSport now comes with an all-new 1.5-litre 3-cylinder Ti-VCT Dragon petrol engine made at the Ford engine and vehicle assembly plant in Sanand, Gujarat. 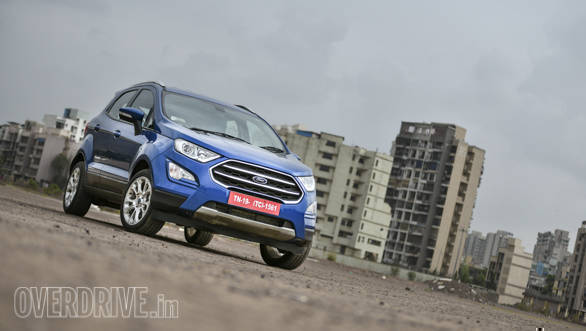 Unlike the past where diesel was the primary choice when it came to selecting an SUV, petrol vehicles have now become more popular as they are easier to maintain and also offer a smoother and sportier performance. While the Dragon engine claims to offer both, it also comes mated with a 6-speed automatic. How good is the combination? We find out in our road test review. 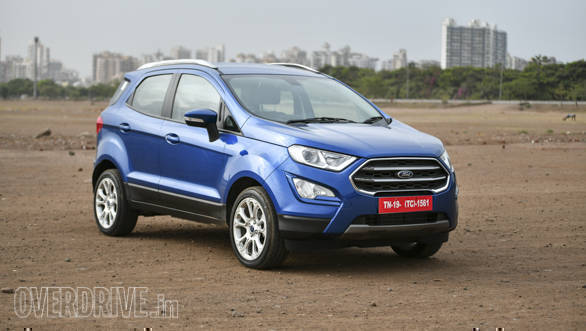 The new Ford EcoSport has become a smarter looking SUV as can be seen with the new projector lights, DRLs and the revised grille. I really wish the Raptor-styled Ford grille was offered, at least as an accessory. The other update is the wider looking bumper with new fog lamp housing that gives the front a more muscular stance. And lastly, the top-spec trims of the EcoSport now get larger 17-inch alloys. Ford has also introduced two new shades, lightning blue and race red. And the latter is our favourite, for it looks the sportiest. 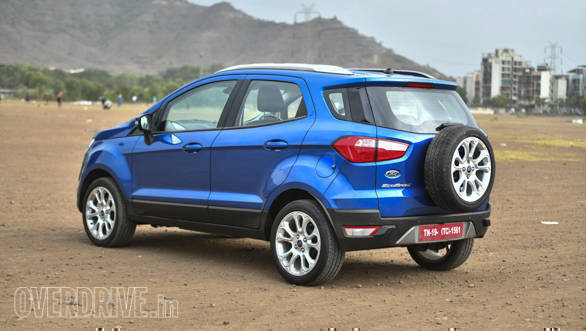 The most sought-after feature in a present day car is the presence of latest connectivity options. The 8-inch touchscreen with SYNC 3 here is clearly the best in its segment when it comes to clean interface and ease of use. It comes with Apple CarPlay and Android Auto and can also be connected with two USB ports along with Bluetooth. The connectivity experience is seamless and doesn't take much time to pair/unpair new devices. 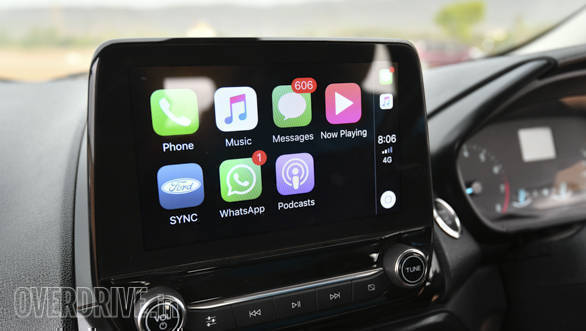 The instrumentation has been updated with a cleaner layout but I still prefer the twin-pod arrangement that was offered previously as it looked sportier. Additionally, we believe the blank spaces between the clocks, screen and the fuel level indicator could have been used in a better way. Fewer buttons and a revised central console design have made the front feel roomier than before. The quality of plastics and the fit and finish of the EcoSport have always been top notch and the new offering continues to have an upmarket feel when compared to its rivals 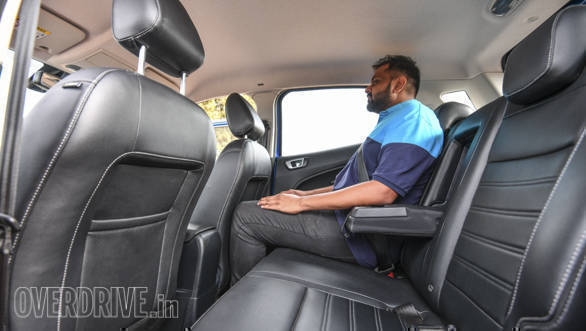 The all-black leather interior of the Ford EcoSport does look sporty and is easier to maintain when compared to the more common beige fabric. Unless you have parked it under the sun for hours. Since this one is a facelift, Ford has not fiddled with the dimensions of the cabin. Taller passengers will be more comfortable in the front for it is more spacious compared to that in the rear. That might not be an issue for shorter trips within the city but might be of some concern on longer journeys. The seats in the new EcoSport have been made wider and also get additional cushioning with adequate support at all places. 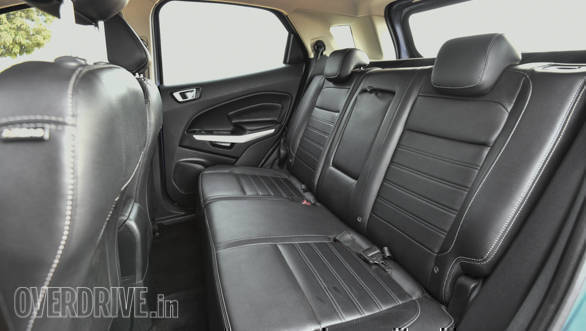 However, there are two things that were a bit discomforting. The missing roof handles and the absence of rear AC vents. If you can manage to overlook that, the smart storage options and the generous boot space continue to make the EcoSport one of the most practical options in its segment. 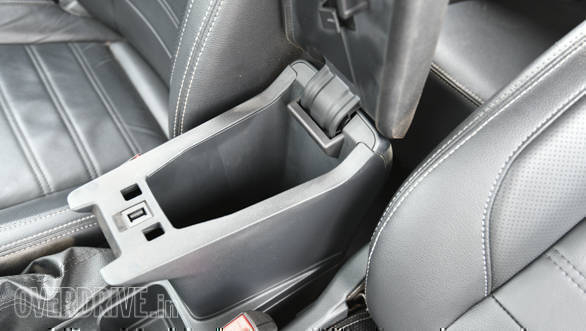 The Ford EcoSport presently has three engine options to choose from. The 100PS/205Nm 1.5-litre diesel, 125PS/170Nm 1.0-litre petrol EcoBoost and the 123PS/150Nm 1.5-litre petrol. While the 1.5L diesel and the 1.0L petrol were available in the previous model, the three-cylinder 1.5-litre petrol is an all-new engine, part of the newly developed Dragon engine family, that replaces the four-cylinder 1.5-litre unit. Ford states that the new engine makes 10 per cent more power and 7 per cent more torque when compared to the previous unit. It also has an improved carbon footprint with a decrease of seven percent in CO2 emissions. It can be optioned with a 5-speed manual or a 6-speed automatic and we had the latter for our road test review. 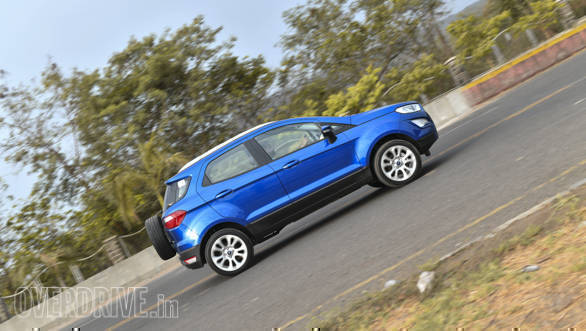 The Dragon petrol is a refined unit and doesn't have the typical clatter of a three-cylinder unit. In fact, at idle, the engine is barely audible. What makes it better than the previous unit is that even at lower speeds, the engine is quick to respond to the throttle input from as low as 1,500rpm. This comes in handy while driving the EcoSport in the city, especially while dealing with bumper-to-bumper traffic conditions. In our test run, it did 0-100kmhph in 12.8s. Even on the highways, the petrol mill continues to perform with great confidence and doesn't take much time to reach triple digit speeds. The engine does tend to get audible at higher speeds but the improved NVH levels make sure most of that does not seep into the cabin. 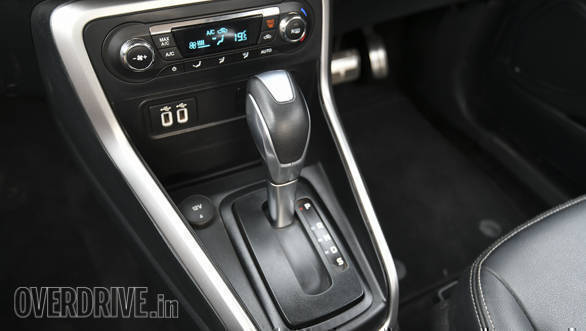 While the competition comes with AMT, the Ford EcoSport automatic is offered with a torque converter. Additionally, it is the only one in the segment to get paddle shifters offering a sportier shift experience. The automatic transmission in D mode is reasonably quick to respond and offers better kick-down at lower speeds. However, I spent most of my time driving the EcoSport in the enthusiastic S mode where the throttle response feels sportier and the engine speed is held for longer to reach a max 6,500rpm before shifting to the next gear. Helping that are the paddle shifters using which you can manually intervene in certain occasions such as overtaking maneuvers or while exiting a corner. In terms of efficiency, the Ford EcoSport petrol automatic delivered 7.7kmpl in the city and 13.07kmpl on the highway. 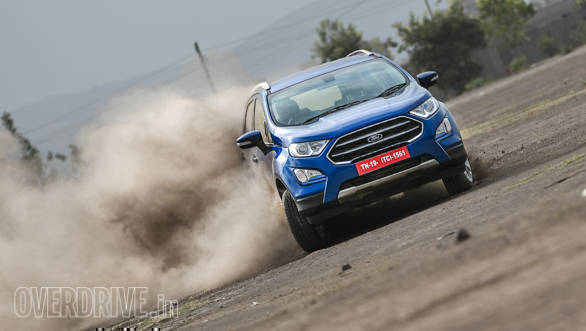 Maneuvering the Ford EcoSport in the city is easy, thanks to its compact dimensions and also the different driving aids such as parking sensors and reverse camera. The EcoSport comes with McPherson struts in the front and twist beam type suspension in the rear. The improved suspension is on the stiffer side and takes care of the uneven surfaces and potholes in a comparatively better way. The EcoSport continues to offer a planted ride with barely any body roll around corners. The steering unit does feel more linear than the previous but that has been done intentionally. That being said, the steering continues to offer lots of feedback. 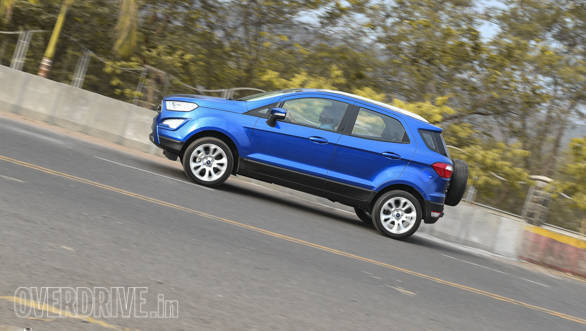 Should you buy one?

The changes in the new Ford EcoSport in terms of design and features have made it one of the strongest contenders in its segment. In fact, the new EcoSport won our comparison test against the Tata Nexon and the Maruti Suzuki Vitara Brezza. Features likes six airbags, emergency assist, etc highlight the importance of safety in Ford cars. 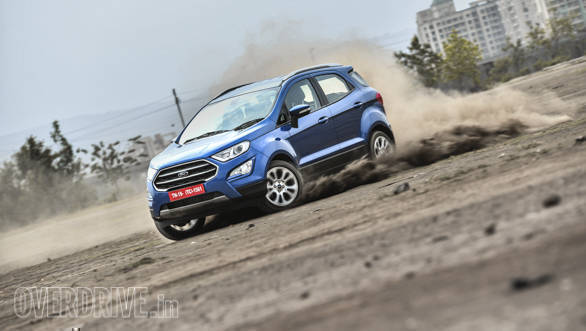 The Ford EcoSport is priced between Rs 8.69 lakh to Rs 13.9 lakh, on-road Mumbai. If you are looking for a compact SUV that will do regular office commutes, highway runs and at the same time offer enthusiastic performance without compromising on comfort and practicality, the Ford EcoSport petrol automatic should be your choice. 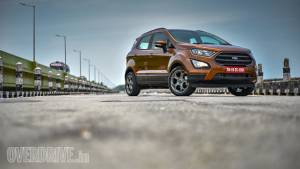