The new BMW 6 Series GT is more than a renamed BMW 5 Series GT, albeit that is very much the car that it replaces. In that sense, the 6 Series GT has the same job. The original BMW Gran Turismo wanted to be a spacious car that could go quite fast if you wanted to but it really just wanted to swallow your luggage, coddle your family and gobble up the highways at an elevated, smooth cruise. There are estates and family sedans that aim for this job to be honest, but BMW's GT bodystyle interpretation has remained unique so far. The new one, obviously, is based on the new BMW 5 Series and it intends to do that same job. As usual, it would like improve all the good things, fix all the niggles and elevate its emissions and automated driving game. Let's look closer shall we? 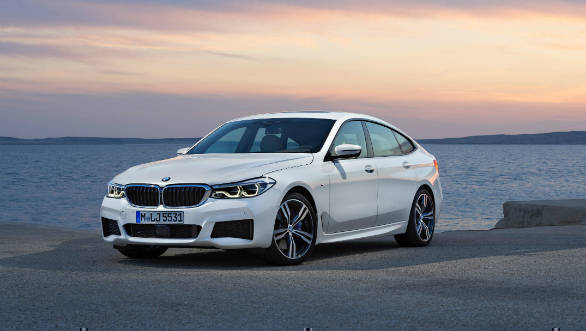 Well, the design has certainly nailed the brief. If the intent was to look sleeker and sportier than the old one, that is. The new head lights look smashing and extend all the way to touch the grille. The new kidney grille now closes up for aerodynamics and is the new form of the iconic BMW nose that's been spreading to all of their newer cars. The skin that extends back from the grille is shaped and taut with creases on the bonnet as well as the sidebody playing with the light with a pleasingly subtle but distinctly muscular effect. 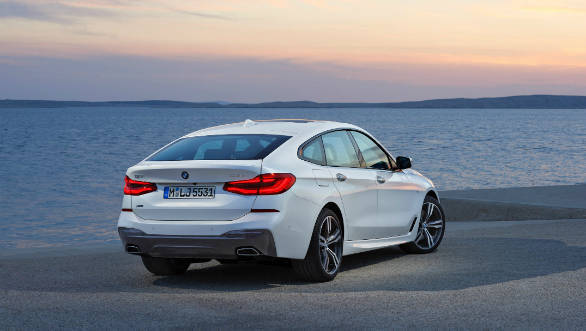 But the showpiece, as it were, is the roof line. The A-pillar is raked back sharply and from the B-pillar, the roof swoops sharply downwards ending in a sweet coupe form that puts the top of the boot lid as much as 6cm below the old one.

As it passes you on the road, you think of the 6 Series GT more like a sleek four-door coupe than a mish-mash of the sedan-sportscar-coupe-estate that it originally intended to be. 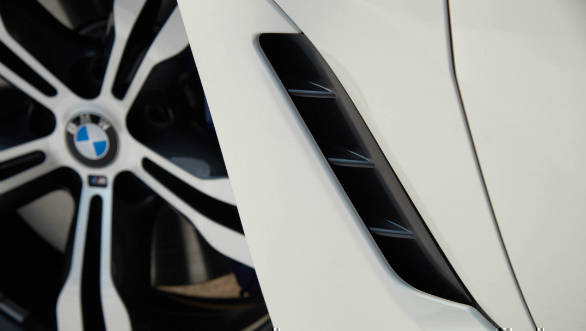 In the little details are the small air vents aft of the front wheels for aero, significant underbody cladding also for aero and a spoiler that deploys at 120kmph for extra downforce.

The same theme of high quality and careful execution carries on inside the cabin. Our xDrive 640i was trimmed in the M Sport package which brings brushed metal finishes but other trims will sport matte woods that look very classy. They're usually dark hues and in that sense, they're very different in feel from the lighter woods that the Scandinavians prefer. 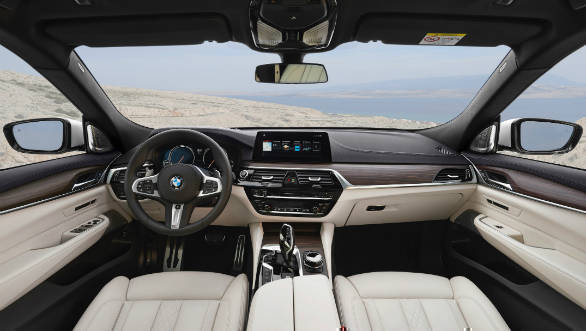 When you slip in to the seats, you'll notice immediately the new instruments. They're a screen with a lovely brushed metal half-ring that looks excellent. The meters change colours with driving modes but remain extremely easy to read. I do wish that some of the auxiliary information wasn't a subtle grey - I had to learn to look for information instead of having it appear naturally to my eyes.

The centre piece is the new 10.25 inch touchscreen that sits atop the familiar centre console. It's a crisp, bright screen and it is powered by the latest generation of BMW's iDrive. That means you can talk to it (didn't try), point at it (not a fan), touch it (works well) and use the controller (works well enough) to change options around. And honestly, there are just way too many options for me run you through them. Suffice it to say that every new BMW's standard and optional equipment lists grow dramatically.

The cabin is spacious to a fault and while the higher mounted driver's seat is comfortable, the M Sport seats has extra bolstering so I don't know what the stock seats are like. That said, the 40:20:40 split rear seats offer generous room and the seat backs recline a little bit for extra comfort too. You can also drop the rear seats via small release button in the boot that turns the 6 Series GT into a spacious cargo carrier if you need to.

On the whole, our short drive in the 6 Series GT proved to be extremely comfortable.

While India will most likely see the 640d as the primarily model, what we drove was the all-wheel drive 640i so the driving experience is at a bit of a remove from what the Indian-spec cars will be like. For what it's worth, the 8-speed transmission is on the ball, you get paddle shifters and flooring the throttle produces satisfactory noises and acceleration. 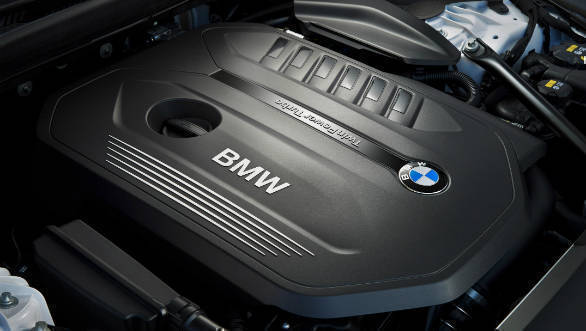 The big thing in the dynamics department of the 6 Series for 2018 is the loss of 150kg through the use of more aluminium all over the car and that means improvements in every department, be it ride, handling or performance and efficiency. But also standard now is self-levelling rear suspension and you can vary the ride height through 30mm in all. The car will lower 10mm automatically (or manually) past 120kmph for efficient high speed runs and you can raise it 20mm above its base height below 40kmph for difficult conditions. The car gets double wishbones up front and a five link rear axle. Our car, unfortunately, was again specced to the gills with active steering - cue huge difference in feel between Sport and Comfort modes - and other features. So India-spec car? Um, you'll have to wait. 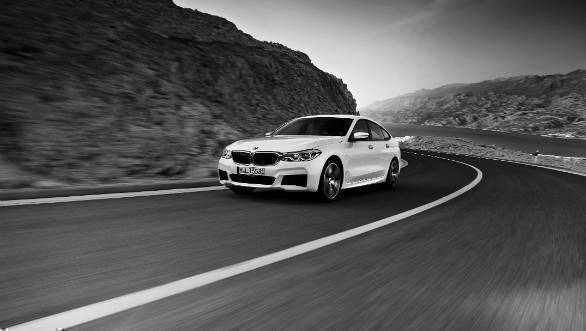 What I did note were two things. First, the difference between Sport mode and Comfort was not too much in terms of ride stiffness though the (active) steering did sharpen up considerably in Sport. And I wished that BMW had made the difference even more stark. But then, two hours later, I was happy in Sport mode because the GT feels just the right amount of sporty while feeling very comfortable in, er, Comfort mode. I guess that's the balance BMW has struck and I cannot complain. Were I to be with family in a place with smooth roads, I'd manage to drive the 6 GT in Sport mode with no one yelling at me.

The electronics and systems

The BMW 6 GT comes with more sensors than a hospital. And they all work rather well together in unchaotic Europe. I tried its ability to keep within its lane on the 5 Series and now the 6 GT is very good at it too. Its updated adaptive cruise control handles events up to 210kmph and it can understand slowing to a stop when the car ahead of you does and then get moving again when traffic moves. BMW says for safety reasons, the move ahead function only works when the traffic ahead moves with 30 seconds.

t isn't just the semi-automatic driving either. The car has its own sim card, it can access your calendar, the driving modes use the maps to work out what's ahead and more. Again, the discussion of these is a bit stunted in the Indian context because since BMW won't be radar-enabled, and our roads aren't as well marked as Europe, many of the these systems won't work in India.

That said, I did spend long stretches looking at the world famous surfing spots near Cascais, Portugal while the 6 Series GT toured grandly more or less on its own. 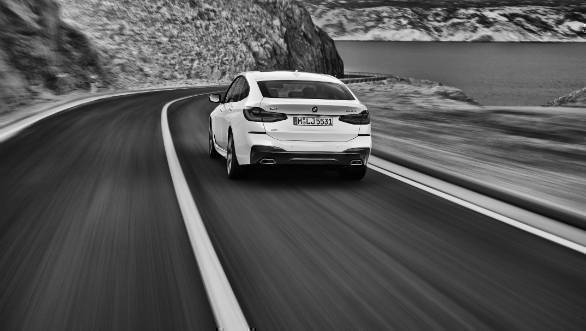 BMW India tells us that the decision on the launch time line for the 6 Series GT is yet to be made final but it's definitely slotted for 2018. We expect to see the car, in India spec, with the 640d engine and trim at the 2018 Delhi Auto Expo. This will be a good addition to the BMW range, I think. It looks sweet, drives rather well, is extremely comfortable. It manages its all-things-to-all-people role with a keen sense of balance. Expect prices to be `85 lakh or a bit higher when the car comes to market next year. 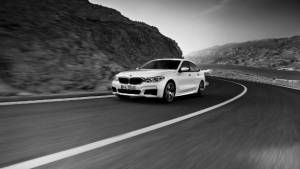