Never a fan of retro-classic motorcycles, I was pleasantly surprised with how much fun the Bonneville Street Twin was. It was a lot lighter and nimbler than its predecessor and looked more youthful. The new Bonneville family in fact has pretty much changed my perspective on retro-classics and I've come to believe they can be good fun too. The newest addition is the Street Scrambler. Now, scramblers as a sub-segment of motorcycles were always meant to be fun to ride, offering a good mix of on-road and off-road ability. Does Triumph's Street Scrambler deliver on that front? I swung a leg over to find out. 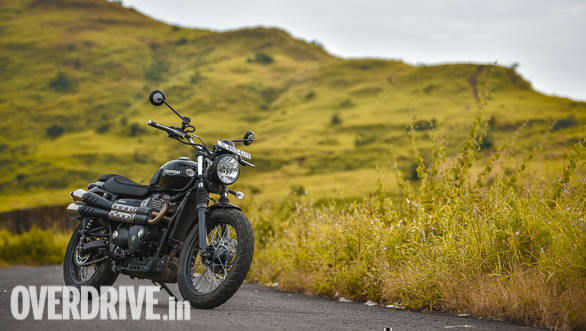 The Street Scrambler is a simple looking motorcycle with its round headlamp and classic round mirrors. In fact most of the design elements including the fuel tank are the same as the Street Twin. The only addition to the tank are the tank pads. The clocks are the same too, a single pod unit that looks good and is very well-finished. What sets it apart is the taller suspension and on/off-road Metzeler Tourance tyres. The star of the Street Scrambler's show though are its side-mounted high exhausts. 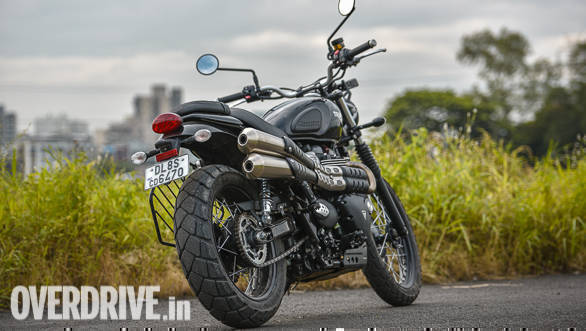 The exhausts add immensely to the bike's appeal with their brushed metal finish and contrasting matte black finish on the heat covers. The seat gets a suede finish at the top for a distinctive appearance. The spoked wheels add to the appearance while the 19-inch front and 17-inch rear wheel setup makes for a tall stance. The minimalistic design approach with no body panels at all except for the small front mudguard looks nice and in terms of design, the Street Scrambler means business. 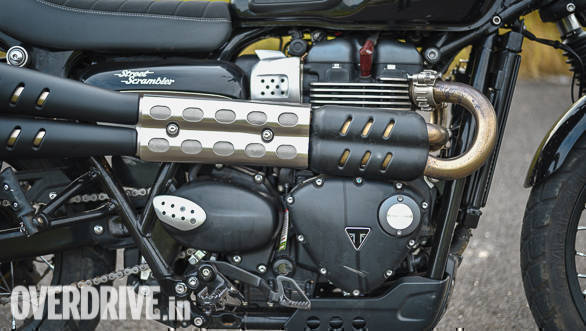 It means business in terms of the powertrain too. The bike comes powered by the same 900cc, liquid-cooled, 8-valve SOHC motor as the Street Twin and the T100 with identical outputs of 55PS and 78.84Nm. 55PS isn't exactly stratospheric but all of the 78.84Nm is on offer from just 3050rpm which is very impressive. I was in fact surprised with the engine's performance when I first rode the Street Twin and it feels equally good on the Street Scrambler. 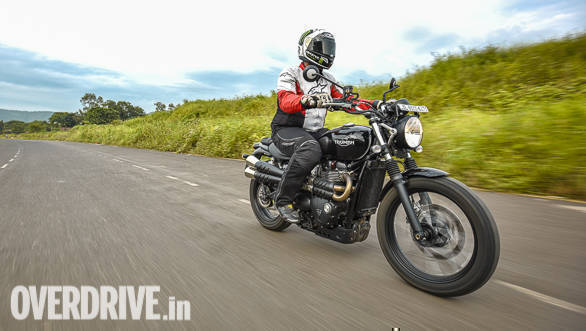 The engine feels peppy from the word go and comes mated to a five-speed gearbox. The ratios feel apt for the bike's focus of being fun to ride in city and with lots of torque at low revs you don't need to keep working the gearbox to make rapid progress. Given its dry weight of 206kg the Street Scrambler is a heavy motorcycle, but the strong punch from the engine ensures the weight doesn't bog it down. 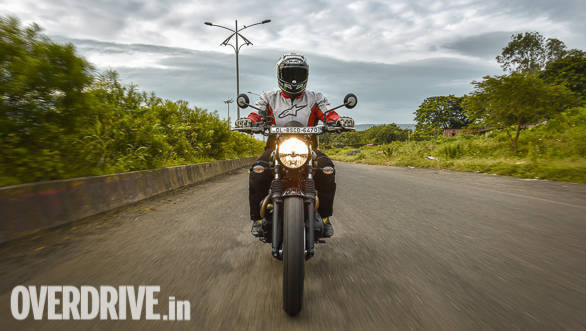 Another highlight is the engine's refinement and exhaust note. The Street Scrambler sounds typical of classic British motorcycles and while not very loud, decibel levels are enough to get you attention on the road. The engine feels supremely refined without any vibration unless banging at the limiter. Of course, you don't need to rev the engine hard given that power is concentrated at the bottom end of the rev range. Lots of power at the bottom end also meant the getting the front wheel up was easy, though carrying a wheelie called for some effort given the bike's weight and the lack of top end grunt. 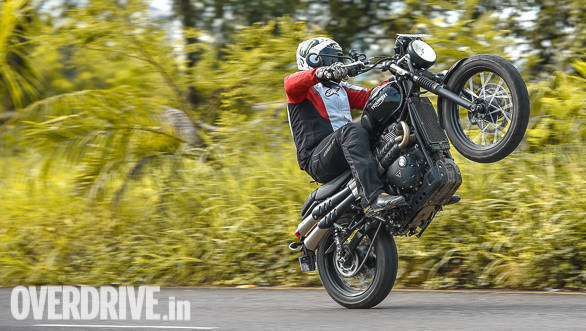 In terms of electronics the Street Scrambler comes with a basic setup including switchable traction control and switchable ABS. The setup is something I liked, and scrolling through menus displayed by a tiny screen below the speedometer is a simple affair  all you need to do is keep pressing one button to scroll or enter menus to turn TC and ABS on or off. Interestingly, the tiny display also integrates a Harley-Davidson style digital rev counter that reads out the revs you're doing. 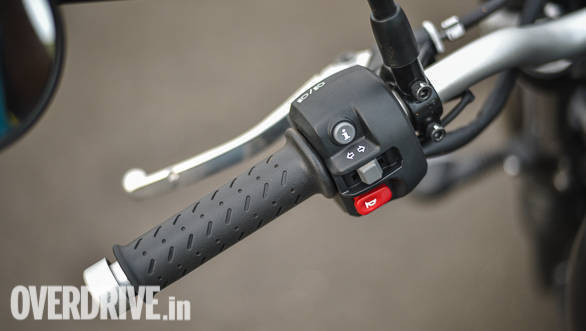 All fluids in, the Street Scrambler will tip the scales at about 220kg which is a lot for a motorcycle meant to be fast and fun on commutes, and the heft is telling in terms of the heaviness of the front end. Make no mistake  the Street Scrambler handles well and the front end is very communicative, but it simply feels too heavy to allow quick directional changes in traffic. That aside the bike is a very confident handler courtesy the firm suspension setup that makes it fun to ride, aided by lots of grip from the Metzelers. True to its name, the Triumph Street Scrambler is not shy of going off-road

The tyres offered likeable grip levels off tarmac too, making for a confident feel on dirt. The switchable TC and ABS meant getting the bike to slide on dirt was no mean feat. In fact, the Street Scrambler is so easy to slide it took me just a few minutes to start pulling some really long slides, making me look and feel like a pro motocross rider! The well-balanced chassis deserves credit apart from the suspension and tyres and I have to say the Street Scrambler is fantastic to start learning to slide bigger motorcycles.

The firm suspension comes at the expense of ride quality though. The rear is stiffer than the front end which unsettles the bike over bumps and also sends some of the impact to the rider. The twin rear shocks are adjustable for preload though, which should help. The riding position is upright with slightly rear set pegs which makes for a comfortable posture, and the Street Scrambler should be reasonably good for riding distances too. Braking is taken care of by a single 310mm disc upfront with a floating caliper which offers good bite and brake feel is confident and reassuring, be it on tarmac or dirt. 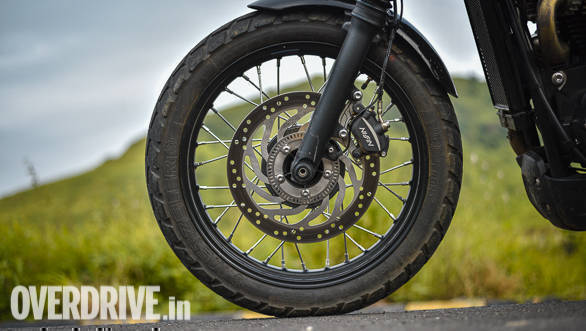 The single 310mm front disc on the Triumph Street Scrambler offers good bite, on or off tarmac

On the whole, the Triumph Street Scrambler comes across as a likeable motorcycle. Triumph has turned the Bonneville family into a very friendly, appreciable one. Just like the Street Twin, the Street Scrambler is also designed to appeal to young enthusiasts looking for a motorcycle that blends retro-cool to modern while being fun to ride. The Street Scrambler delivers on that front with its design, performance and handling, and retails at Rs 8.10 lakh ex-showroom pan-India, which is a lakh over the Street Twin. It comes across as a better looking and more capable machine, which in a way justifies the premium the bike commands. 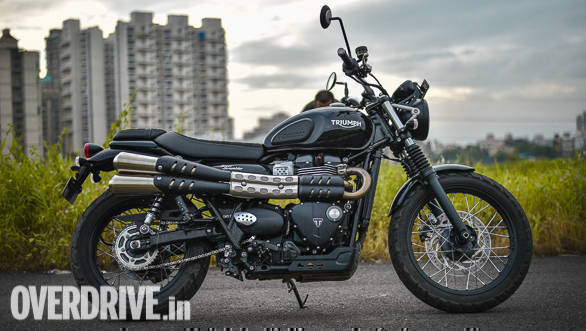 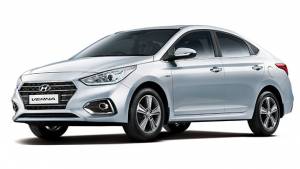