The Brutale 800 impressed us when we took it for a short spin in the hills of Varese, Italy with its high levels of refinement, performance and handling. The bike has finally been launched at Rs 15.59 lakh ex-showroom, which is eye-wateringly expensive when compared to every other middleweight naked on sale in the country. MV Agusta though has always been more premium as compared to other motorcycle brands, thanks to its exotic value and high levels of precision. Is the new Brutale convincing and emotive enough to justify the price tag though? A thorough road test helped us assess the bike.

I've no doubts in saying the Brutale 800 is one of the best looking motorcycles in its segment. The basic silhouette is a nod to the original Brutale that set the ball rolling for sport nakeds nearly a decade and half back, but there's a sense of modernness to the design that makes for a head-turning appearance. The oval headlight with its LED DRLs, the little instrument cluster and wide fuel tank are all very appealing to look at. Clearly, MV's tradition of making some of the most gorgeous motorcycles on the planet continues with the Brutale 800. 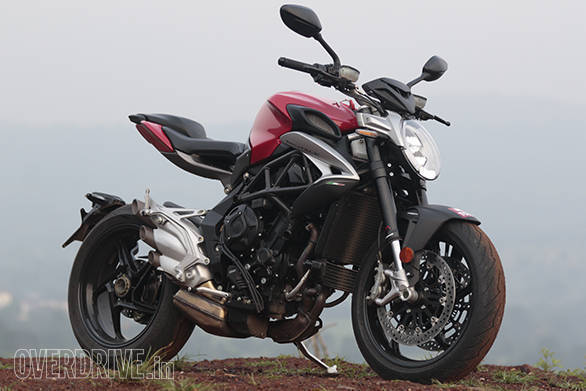 What's even more striking than the design though is the bike's compactness. In the flesh, the Brutale 800 doesn't appear much larger than say, a KTM 390 Duke! That's some achievement in my books, and I even like how the motorcycle is packaged very tightly, making it look extremely compact for an 800cc sport naked. The trellis frame finished in red, the rear sub frame with its hole under the rider's seat, the tall rear end and single-sided swingarm all make for a very distinctive appearance. 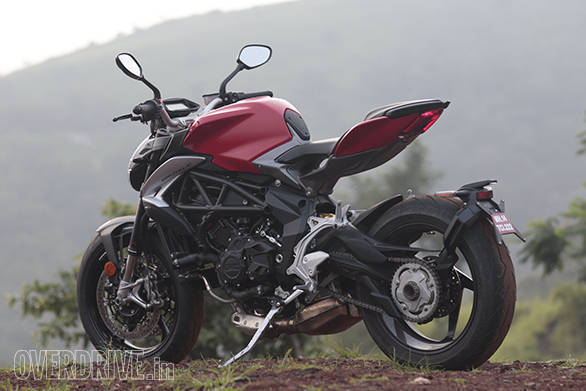 What takes the cake though is the rear number plate hanger. It's intricate design and the precision with which it has routed 'through' the rear wheel is truly unique. In terms of design and engineering, there's few brands that can match up to the precision and beauty of an MV Agusta, and the Brutale 800 is another example of the same. Fit-finish and paint levels are top notch and my only disappointment were the tacky-feeling switches for the electronics, positioned on the left handlebar. The switches are identical to older MVs and aren't the easiest to use in terms of changing TC/ABS levels. 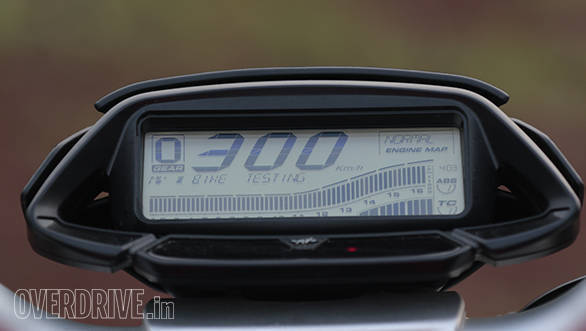 In terms of electronics the Brutale 800 gets four riding modes including Sport, Normal, Custom and Rain. It also gets 8 traction control levels, 3 ABS levels and a bi-directional quick shifter. The quick shifter is a boon, and is something most middleweight nakeds do not get.

The Brutale 800's 798cc, liquid-cooled, inline triple cylinder engine makes for some seriously explosive performance. It produces 110PS and 83Nm of torque, in the same ballpark as most middleweight nakeds, but it is the power delivery that makes the Brutale 800 the stonker of a motorcycle it is. 80 percent of the torque is available from as low as 4000rpm which calls for careful throttle openings from standstill and low speeds. The front wheel is particularly keen on breaking contact with tarmac in first gear which called for caution when opening the throttle every time I had to roll off in traffic. Power wheelies in first gear called for zero effort and merely cracking the throttle open wide had the front wheel pawing in the air. The 0-100kmph time of 3.9 seconds in our VBOX test is proof of how explosive the performance is. In fact, every time I launched the bike for a full-bore acceleration run the front end felt light from the moment I released the clutch till the moment I shifted up to second gear. 160kmph was dispatched in just 8 seconds. Keep the throttle pinned and the Brutale 800 will hit 200kmph in fourth gear, just before you need to shift up to fifth. This kind of performance is unheard of in the middleweight naked space as most other motorcycles in the segment put their power down in a far friendlier manner. 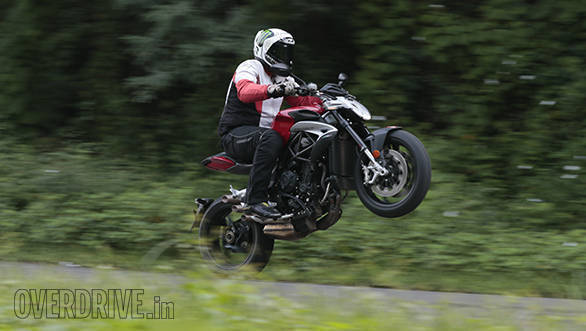 The sense of urgency with which the Brutale's engine piles on revs and lets the motorcycle acclerate is sure to leave a lot of riders stunned, and I can confirm the Brutale 800 isn't for the average motorcyclist.

The party truly begins above 6000rpm, which is where the thrust from the engine gets stronger. The precise fuelling adds to the exhilaration, making for a crisp feel and precise throttle control. Of course, the six-speed gearbox equipped with the bi-directional quickshifter compliments the engine performance very well. In fact, the only time I used the clutch lever was when I had to take off from standstill or come to a halt, as the quick shifter worked perfectly every time. 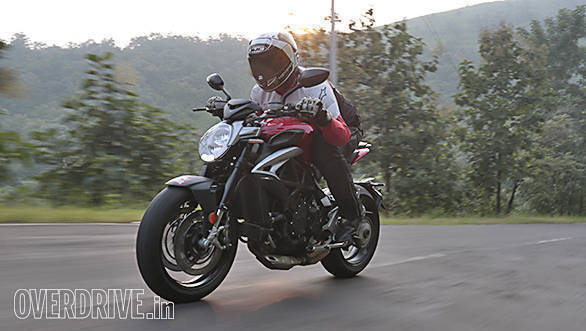 6000rpm is also where the exhaust note gets more sonorous, particularly thanks to the mild intake howl. The engine sounds typical of a triple cylinder engine with a slight gruffness at idle, though it sounds a lot smoother and sportier as revs go up. Part of the delight in using the quick shifter is also thanks to the engine sound it produces apart from its precision. Shift up close to 10,000rpm and the upshift is effected with a little 'bark' from the exhaust, akin to pulling the clutch in at high revs on a race bike with a free-flow exhaust. The exhaust note on overrun was a sound not many stock motorcycles can boast, and added to the bike's addictive theatrics. 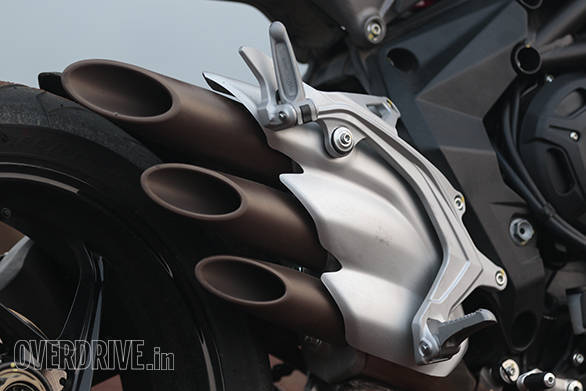 For those interested, we also tested the Brutale 800 for efficiency, and it returned 12.79kmpl in city and 17.6kmpl on the highway.

Its ultra-compact dimensions and 175kg dry weight mean the Brutale 800 is one of the quickest handlers in the country today. The steering geometry is super-sharp, which makes for extremely quick directional changes, aided by the wide handlebar. Sport nakeds are engineered to offer a balance between high speed stability and low speed manueverability and the Brutale does that job really well. Front end feel and feedback are excellent and manuevering through traffic was a breeze, as was tipping the bike into long, sweeping corners. 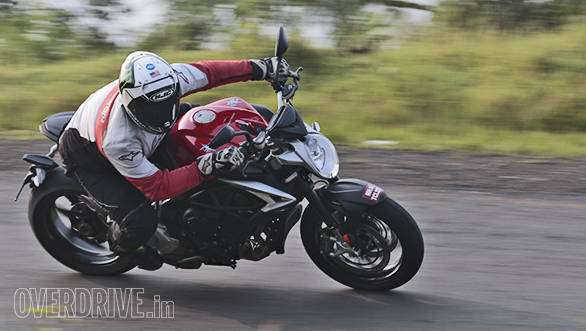 The Brutale 800 is suspended on fully adjustable 43mm Marzocchi upside down forks and a fully adjustable Sachs monoshock which along with the trellis frame makes for a handling experience that's closer to sportsbikes. The Pirelli Diablo Rosso IIIs it comes shod with are a big help too, offering excellent grip levels. Chucking the bike through scores of city traffic or dispatching a series of corners and chicanes is all too easy, and the Brutale devours hills at a feverish pace with its kind of handling. In fact, its handling and engine performance make for a heady mix which is a lot more satiating than any other middleweight naked. 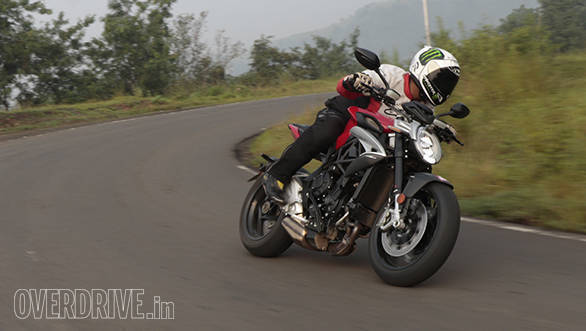 The awe inspiring handling though comes at a cost. The stiffly sprung suspension makes the Brutale 800 rather uncomfortable on our roads. You pretty much feel every bump thanks to the uber-communicative front end, and the fact that you're arms are angled at nearly the same angle as the front forks when leaning forward and that doesn't help either. This is the exact state of tune for the suspension as international markets  the bike we rode in Italy was as stiff, and we would have liked a slightly softer setup for our conditions. The seat is not too large and needs more padding as well. On the whole the Brutale 800's seat and stiff suspension setup make it good only for short rides only, be it in city, in the hills or on a racetrack.

The Brutale 800 is easily the sharpest, fiercest middleweight naked I have ridden till date. In terms of pure motorcycling pleasure it is satisfying like few other motorcycles, be it in its own segment or even a rung above, in the litre-class naked space. The triple cylinder engine puts power down in an explosive manner that might just be too much for inexperienced riders but is sure to tantalise the taste buds of experienced ones. Of course, priced at Rs 15.59 lakh ex-showroom the Brutale 800 isn't a motorcycle for everyone. 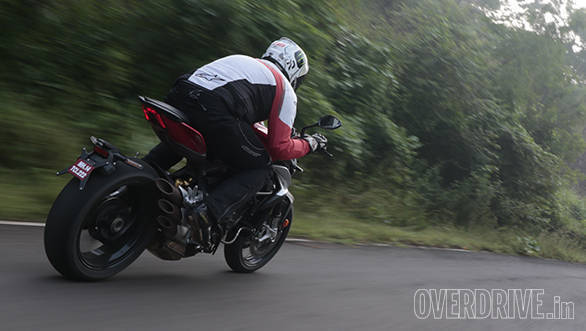 It is a machine for the well-heeled enthusiast who has been riding fast motorcycles for a long time and wants something that's fast and emotive on the road and fun at the racetrack. Its stiff suspension makes the Brutale 800 cumbersome to ride but that aside there really isn't much to complain. This is a hardcore motorcycle that stays true to its genes and justifies being an MV Agusta in every manner, the price tag included. So unless you're someone with deep pockets and serious motorcycling experience, the Brutale 800 may not be the motorcycle for you, despite being one of the most lust worthy ones on sale. 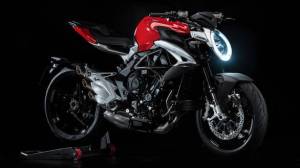 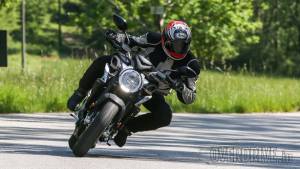