The Mercedes-Benz CLA is the centre of attraction at the German carmaker's Indian operations. It is the most affordable sedan that you can buy with a three-pointed star on the grille. But it looks anything but entry level. With its stylish design, it has carved a niche for itself. Along with its hatchback siblings, the A-Class and the B-Class, the trio have brought in some serious numbers for Mercedes-Benz, making them the bright stars of the line-up. While the hatchbacks got their due makeovers recently, the CLA gets its new robe this month. But like the fabled emperor's new clothes, the CLA's ensemble changes are almost invisible. 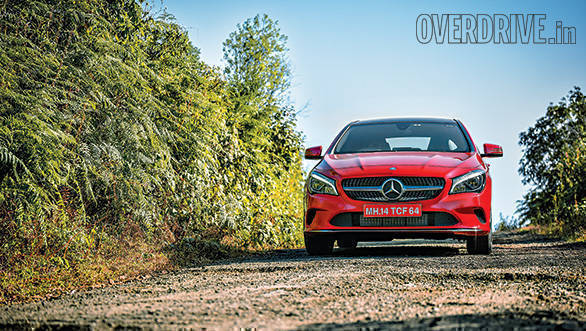 Look closely though, and you will notice that the CLA gets a new set of headlights that have been restructured and now get LEDs as a standard fitment. The moth-wing tail lights too have a revised detailing that looks marginally better than the unit it replaces. The bumpers have been given a minor redesign too, but the larger exhaust tips and the new chrome touches around the splitters and winglets take it closer to the AMG-styling kit. So while the changes do seem pretty invisible, it is clear that Mercedes-Benz did not want to go overboard with making too many revisions to an already good-looking car. It is so good looking, in fact, that we at OVERDRIVE even conceived a photography contest around it, called Frame the Star. Despite having browsed through some of the best work from some of the best photographers, I believe that the imagery just doesn't do justice to the CLA. It looks much better in the metal. 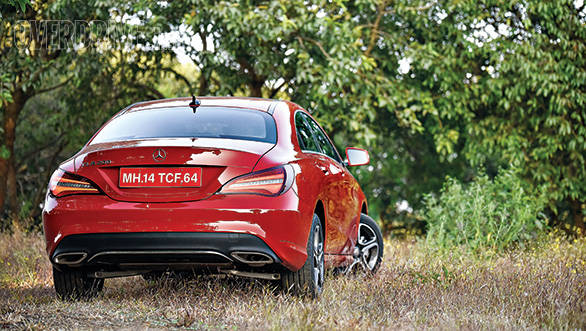 Like most four-door coupes out there, the CLA does have a polarising design though. If you are into lean bodies and faces with sharp features, then the drooping shoulders and the rounded features of this car may not appeal to you. But if curves and expressive eyes are your thing, the CLA could make you go weak in the knees. So much so that you may not have trouble convincing yourself to overlook more practical options likes a Camry or a Superb which offer better space and features. 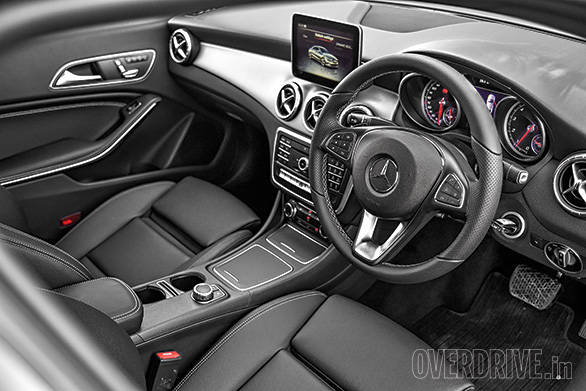 This one has a snug and compact cabin. Though it is certainly better than the A-Class in terms of overall space, four adults aren't going to be very comfortable travelling together. A nuclear family consisting of two kids or teenagers will do fine. But the CLA is ideally suited for singles for the kind of attention it grabs. 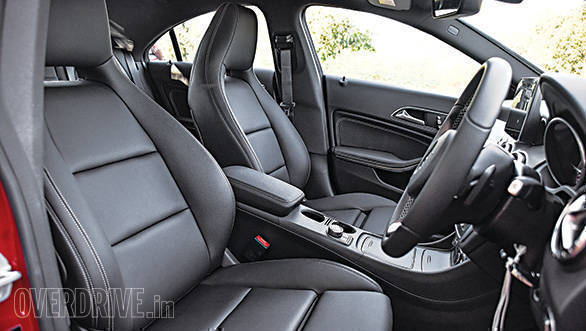 The cabin gets a few updates too - the seat upholstery has a new pattern and the storage compartment under the front centre armrest now gets two USB ports, finally replacing the special interface cables that were used earlier. The Comand infotainment software has been upgraded too, and the hardware now gets a larger 8-inch display with a crisper resolution. It isn't a touchscreen though and can be operated with a rotary dial on the tunnel console. You can also opt for a new Garmin satellite navigation module to be integrated within the Comand operating system. Furthermore, you get Android Auto and Apple CarPlay now. The connection with an iPhone also prompts you to install CLA-specific apps, but at least at the time of this test, they weren't available on Apple's Indian app store. Unlike the launch edition last year, the audio unit on the locally produced CLA isn't mated to a Harman Kardon system anymore, but it sounds quite decent nevertheless. 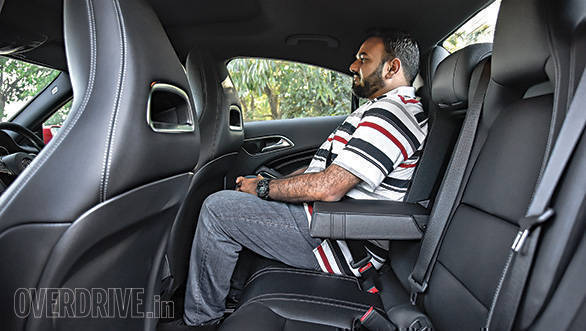 Another little change in the switchgear is the 'Dynamic Select' switch which is essentially a renamed mode selector from the previous car. It lets you cycle between Economy, Comfort, Sport and Sport+ modes that can alter throttle and gearbox responses and the steering feedback. Speaking of the mechanicals, there is no change to the drivetrain or its behaviour. The CLA will be offered with the same engine options as the outgoing car - a 2.2l diesel and a 2.0l petrol. The one we have driven here is the petrol, and it is as impressive as its diesel counterpart. 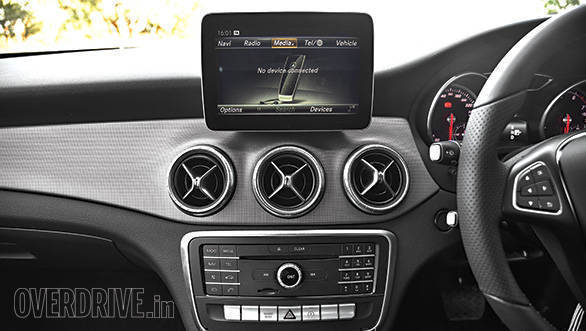 It's a 4-cylinder mill that manages to churn out a humble 183PS of power and a healthy 300Nm of torque from quite low down the rev-range, thanks to turbocharging which aids drivability in most common scenarios like urban commutes, highway runs or a fun drive in the mountains. But at the same time, there is no hint of torque steer or an overwhelming power band, which makes it quite an easy car to drive and have fun with. With all horses running eagerly in the Sport+ mode, the CLA claims to hit the ton in under eight seconds and can hit a top whack of 235kmph, which is quite enticing for a compact luxury car. 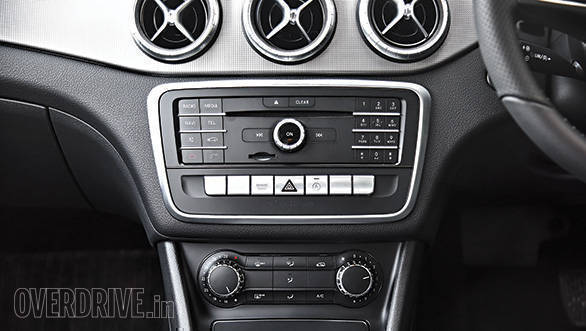 The 7-speed dual-clutch transmission puts power down to the road in a linear manner, while safely aids like the acceleration skid prevention and traction -control system make sure that the CLA remains quite nimble despite the front-wheel-drive configuration. The gearbox is quick to upshift but a tad slow to downshift, and therefore the paddle shifters are your better friends around the twisties. The meaty torque layer means that the slow downshifts hardly become a hindrance when driving in the city or on the highway. When the engine does need to rev high though for overtakes, it will do so quite quickly and reward you with a pleasant soundtrack of an inline-four at the same time. 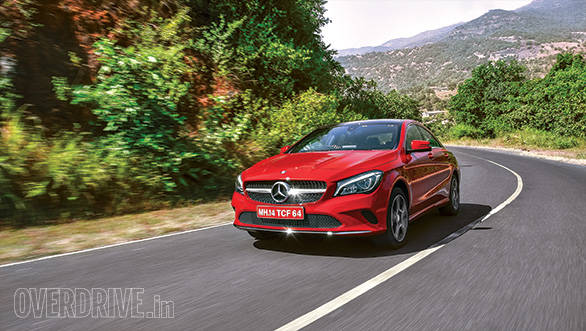 It is a good handler too. Around the twisties, the CLA feels quite taut despite the rough road package and higher ride height that the Indian model is spec-ed with. There is hardly any vertical body movement or nose dive, and it clearly falls in line with the refreshing sportier edge that most new Mercedes-Benz cars are now tilting towards. That makes the car quite involving to drive. Though the suspension set-up comprising of the MacPherson struts and wishbones up front and the four-link rear doesn't come with adaptive dampers, ride quality is pretty good. It is only when you load up the rear seat with three adults that the rear end becomes squishy and starts bottoming out over undulations. But only take your date out for a drive on the highway or in the mountains, and there will be no room for complaint from the suspension or your co-passenger. 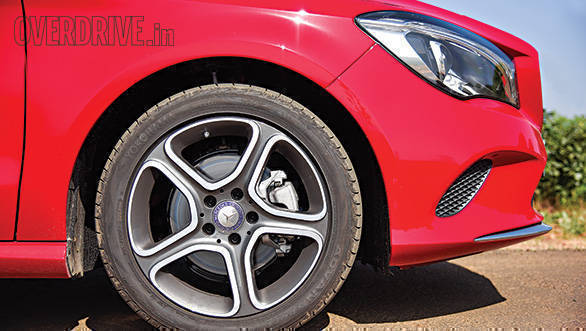 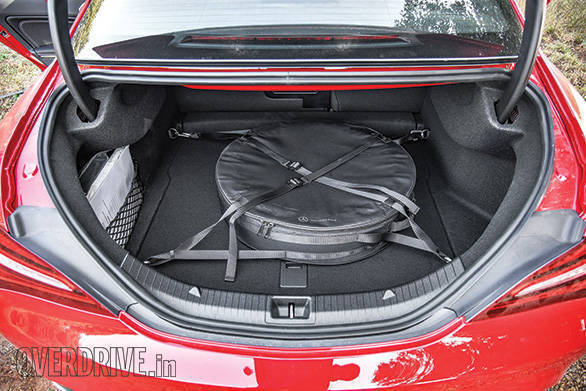 The CLA, then, still manages to be a fun little package, with the essential features and elements that make it feel like a typical Mercedes-Benz despite its entry-level price point. In all our previous tests, the CLA has outclassed its competition thanks to that packaging and for the way it breaks away from the stereotyped body styles of the compact luxury segment. Even though it has already reached its mid-life makeover, those points still remain strong for the baby Benz. So whether you notice the new clothes or not, the CLA still remains quite a desirable car.