The Ducati SuperSport promises to change the way middleweight supersport motorcycles are perceived, particularly by less experienced riders. Ducati says that unlike conventional sportsbikes that have an extremely committed riding position, peaky power delivery and a strong focus on lap times, which often makes them cumbersome to ride outside of a racetrack, the SuperSport is a lot friendlier and easier to ride, be it for everyday commutes or light touring. 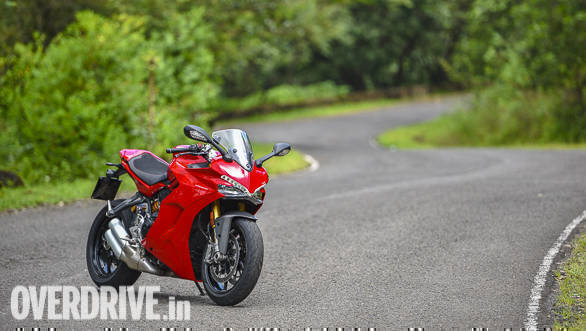 In the Indian context, Ducati's SuperSport thus promises to be a better alternative to supersport machines like the Triumph Daytona 675 and its own sibling, the 959 Panigale. A quick spin helped us understand the bike.

The SuperSport tries to look different but there's lots of resemblance to the more hardcore Panigale family, particularly the design of the tank and fairing. Of course, I won't deny that it is a looker, particularly in this fetching shade of red. The LED DRLs and all-LED headlights make for a gorgeous face, as do the lines on the fairing that merges into the fuel tank seamlessly. 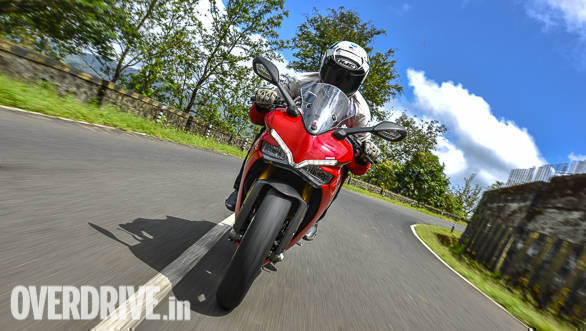 The Ducati SuperSport's headlamp design reminds of the 959 Panigale, while the LED DRLs remind of the Multistrada

Interestingly, not a single bolt is visible on the fairing, making for a very clean look. The mirrors and all-digital LCD display are reminiscent of the Panigales too. The single-sided swingarm is the piece-de-resistance, while the body-coloured pillion seat cowl which is on offer on the S version only adds to the bike's charm. The clip-on handlebars aren't too low set and are closer to the seat, while the footrests aren't too rear set or placed too high, making for a comfortable posture. The L-twin engine helps make the SuperSport very slim and in fact once in the saddle I realised that the fairing, particularly the area below the clip-ons isn't a lot wider than a KTM RC390. Pictures might suggest it is a big motorcycle but the SuperSport is extremely compact. We rode the more expensive SuperSport S that comes equipped with higher-specced 48mm Ohlins upside down front forks and they look sportier with their golden colour. The Panigale-inspired mirrors look small but stalks are long enough to offer a good view. 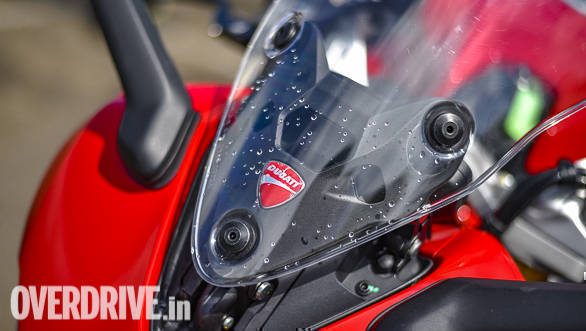 Another impressive feature is the adjustable windscreen. It sits flush with the fairing but a spring-loaded mechanism lets you pull it up by about 50mm to improve wind protection. Fit-finish levels are excellent and the SuperSport feels like a Ducati in every sense. New switchgear adds to the sense of novelty, particularly the ignition/engine kill switch and the additional switch on the right hand side that lets you turrn the headlight off and only have the DRLs running, unlike most other motorcycles. 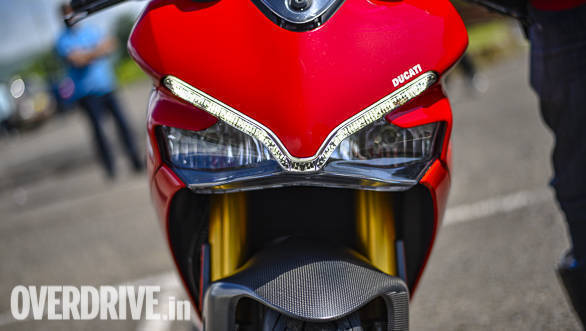 The SuperSport S borrows the 937cc, liquid-cooled L-twin motor from the Hypermotard 939 and Multistrada 950 and outputs are identical at 113PS and 93Nm. The highlight is the smooth, linear power delivery. Ducati says 80 percent of the torque produced is on offer from just 3000rpm, which was telling the form of the engine's eagerness to put the power down. There's barely any shove below 3000rpm though, typical of Ducatis. I couldn't ride the bike in the city but could feel the resistance from the engine at low revs and ultra low speeds in the form of lack of grunt and the judder it came with. 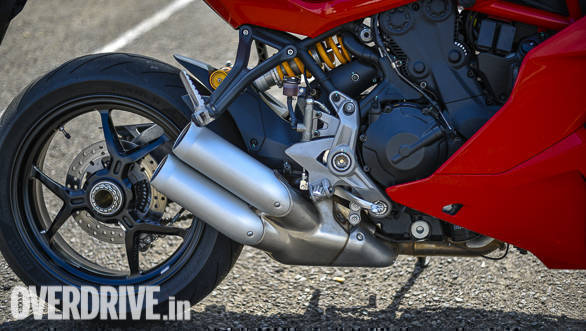 The Ducati SuperSport and SuperSport S use the same, 937cc liquid-cooled L-twin engine as the Hypermotard 939 and Multistrada 950

Above 3000rpm there's a linear build-up that's very friendly without any power surges. The delivery will help newer riders, while overall performance is good enough to keep experienced riders enthused. The engine is mated to a slick-shifting six-speed gearbox, and the SuperSport S comes equipped with a bi-directional quickshifter too. It works brilliantly in both directions and also matches revs when downshifting. On the whole, the engine has been tuned to make the bike easy and fun to ride. Straight line acceleration isn't as quick as a full-blooded supersport but the bike feels quick and there's ample grunt at corner exits with a likeable, torquey feel. 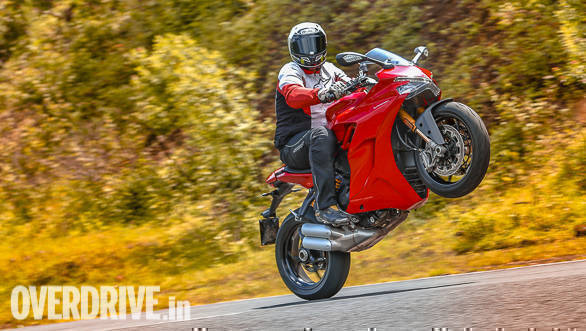 The power delivery also made the SuperSport S a lot easier and friendlier than expected to pull wheelies on. It comes with three riding modes Sport, Touring and Urban. It also gets 8 traction control and 3 ABS levels, and you can customise the levels for any of the three modes. The safety net is as good as it gets, but scrolling through the menu options levels is tedious. 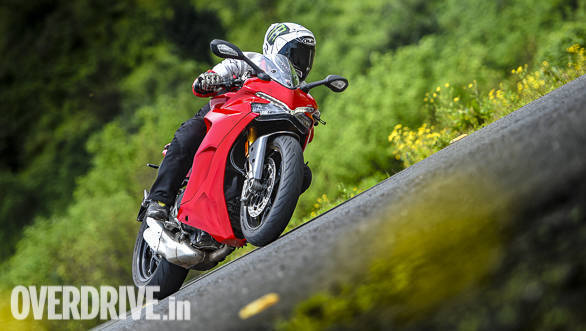 With a kerb weight of 210kg the SuperSport S is on the heavier side, but not once did it let me feel its weight. Be it tipping into a corner or being flicked from side to side it felt nimble thanks to the suspension and the well-sorted trellis frame. The handling will encourage inexperienced riders to push harder, while allowing the experienced lot to explore the bike's full potential easily. Credit also goes to the Pirelli Diablo Rosso IIIs that made for excellent grip. We only rode the bike in perfectly dry conditions but the Pirellis should offer good grip in the wet too. 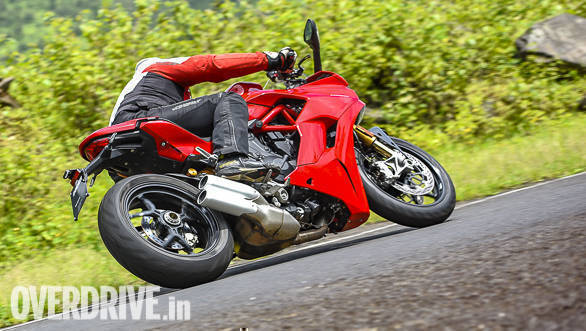 The SuperSport S is likeable for several reasons. It looks good, typical of motorcycles from Borgo Panigale, the engine is extremely refined, the linear power delivery will be appreciated by riders across spectrums and the handling is typical of a Ducati. For a brand that tradionally made motorcycles focusing very seriously on extreme performance  be it their nakeds, sportsbikes or adventure tourers, the SuperSport comes as a bit of a surprise with its ability to impress inexperienced and experienced riders alike. 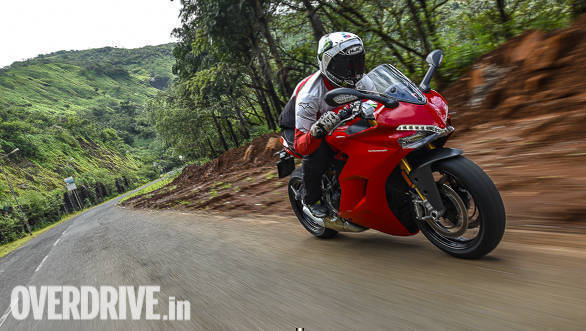 Priced at 12.08 lakh for the standard version and Rs 13.39 lakh ex-showroom for the SuperSport S, it feels expensive though. The SuperSport feels accomplished at its task of being a friendly, easy sportsbike but at its price there's several motorcycles, including naked streetbikes, that offer similar performance levels in an equally appealing manner. This puts the SuperSport in a niche of sorts but if looking for a friendly sportsbike that's good for commuting, sport riding and some bit of touring, the Ducati SuperSport should certainly feature on your shopping list. 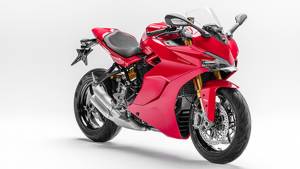 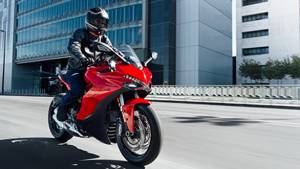