This is ridiculous. I've been driving two ridiculous SUVs all day. These are SUVs I'd never buy for myself. Well, that has more to do with the fact that I'd have to double mortgage everything I own and sell some vital organs to be able to afford one of them. But then, we auto-hacks don't usually write stories to lay our own queries to rest. For example, most auto-hacks wouldn't ever have to decide between a Mercedes-Benz GLS and a Volvo XC90. But here I was, deciding exactly that. If I had a crore of rupees lying around and wanted to spend that money on an SUV, what would I buy? It's Sweden versus Germany. Three pointed star versus upwards pointing arrow on a circle. White SUV versus grey SUV.

In my opinion, the Volvo is the better looking SUV here. But then it is possible that I only think so because I've been seeing similar front ends on Mercedes SUVs ever since the last ML came out. The Volvo on the other hand looks straight out of a time warp. Styling wise, it's years ahead of the GLS. And while the GLS isn't a bad looking car in any sense of the word, the XC90 is just way prettier and sexier to look at. 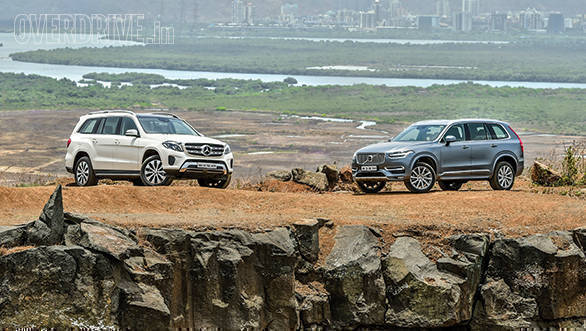 Between the two, the GLS is the more muscular SUV. But, as I said before, the design has been around for too long. However, the large size and intimidating face works wonder for its road presence. Watching the GLS coming at you in your rear-view mirror is sort of like watching Thor's hammer flying straight at your face. And if the Merc is a hammer, the Volvo is Hattori Hanzo's finest steel. The XC90's design has a certain smoothness that cannot be explained. It looks nothing like the last generation XC90, which was all business. The new one is sort of like Gamora - she's not really from your dimension, but you just can't stop staring. 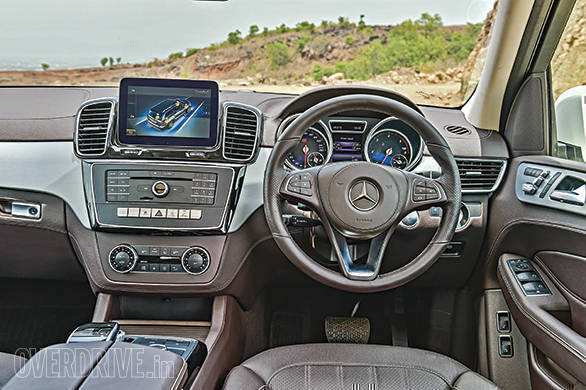 The cabin itself is luxurious , but the layout has become dated and a bit too familiar

But you have to, because at some point you will have to drive. And when you do, you will notice that the Volvo is a classy car to be in. The cabin is finished in black leather, brushed aluminium and some top quality wood. And being a Volvo, it is also endowed with the best tech that money can buy. So you get Volvo's Sensus Connect and navigation, Bowers & Wilkins sound, fully adjustable vented and heated front seats, heated rear seats, a HUD and one of the most advanced touchscreen infotainment systems in the world. Only complaint I have is that in a cabin that is otherwise top-spec, the steering feels rather cheap. The materials feel plasticky and are completely mismatched from the rest of the car. 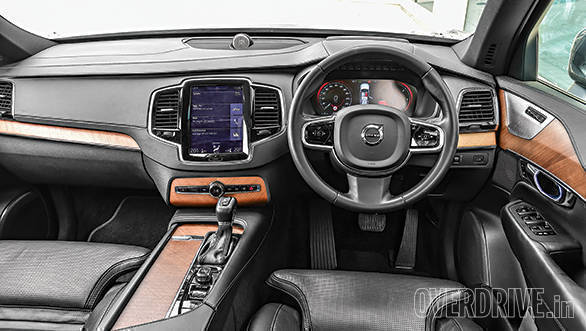 The Volvo's interiors make great use of leather, brushed aluminium and wood

The Mercedes on the other hand uses a tried-and-tested formula. The cabin itself is evolved from the Mercedes cabins that we have been seeing for several years. The buttons on the dash and the infotainment jog dial are all familiar. However, they are feeling the age and a newer layout might actually not be a bad idea now. In fact, a cabin inspired by the GLC would have been a perfect fit. That said, the materials are all top-notch in typical Merc fashion. The leather is soft and the aluminium bits are of excellent finish. And unlike the Volvo, the GLS uses lighter colours inside which makes the cabin feel roomier. 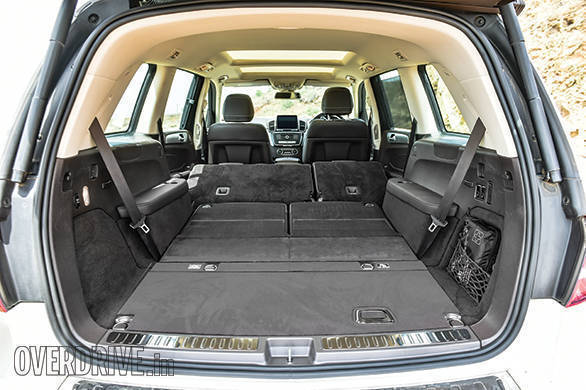 But it isn't just the colours that make the cabin so spacious. The GLS is longer by 180mm overall and 91mm in terms of wheelbase. This gives the GLS more space in the second and third rows. Additionally, the Volvo doesn't have a flat footwell in the third row that makes sitting there a bit uncomfortable. 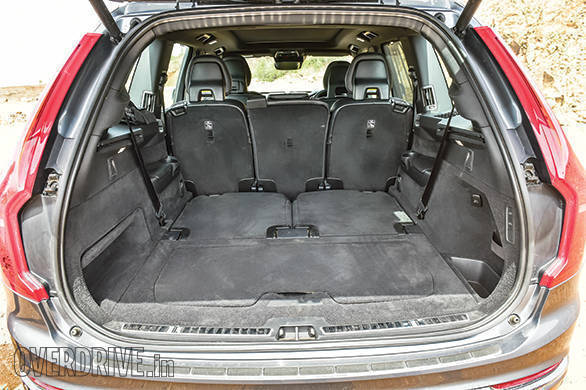 However, where the Volvo trumps the Mercedes is when it comes to the amount of safety tech packed into it. If ever there was a car that was impossible to crash, the XC90 is as close to that car as humanly possible. This not to say that the Mercedes is unsafe. In fact, the GLS has all the safety tech you will ever need. The difference is that if the Mercedes is an armoured car, the Volvo is an armoured car parked inside a nuclear bunker, monitored by drones, surrounded by a moat and protected by a fire breathing dragon.

Both the GLS and the XC90 use a monocoque construction and get similar suspension components. The Mercedes gets AIRMATIC with adaptive damping control and 4MATIC all-wheel drive. AIRMATIC lets the GLS lower it ground clearance by 15mm at high speeds and raises it by 60mm in raised mode. The XC90 too gets adjustable air suspension with electronic damper control. You can also lower the car by 20mm and raise it by 40mm according to the situation. 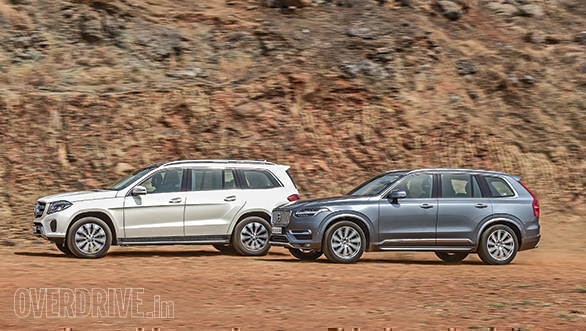 While the spec is similar, the way they are set up are completely different. The XC90 is set up more like a car and hence the suspension is stiffer. While in Comfort mode, the suspension does manage to absorb all bumps and potholes, it is no match to the GLS' magic carpet ride. On the flipside, the Merc's soft set-up does tend to let the SUV roll and pitch a bit more. But I find this acceptable, considering how good the ride quality is. Things do get a lot tauter in Sport mode, but so does the Volvo's suspension. And the combination of the stiffer set-up and the more advanced electronics package make the Volvo a better handler. The 20-inch rims with lower profile tyres only add to this.

If you like your SUVs to handle like sedans, the Volvo is a better bet. There is a bit of body roll but not as much as in the GLS. Plus, the suite of electronics continuously and seamlessly work to arrest understeer and oversteer to keep you going the way you intended to all through. The GLS on the other hand is like an old-school SUV. It rolls way more and hard braking can make the nose reach for the ground. But the thing is that, where the modernity makes the Volvo seem a bit delicate, the GLS feels like a proper tank. It feels positively indestructible.

Here is where both vehicles are truly different. The GLS uses a 3.0-litre V6 that makes 258PS and 620Nm of peak torque. This is mated to a 9-speed automatic 'box. The XC90 on the other hand uses a 2.0-litre inline-4 that makes 225PS and 470Nm. This power is delivered through an 8-speed gearbox. 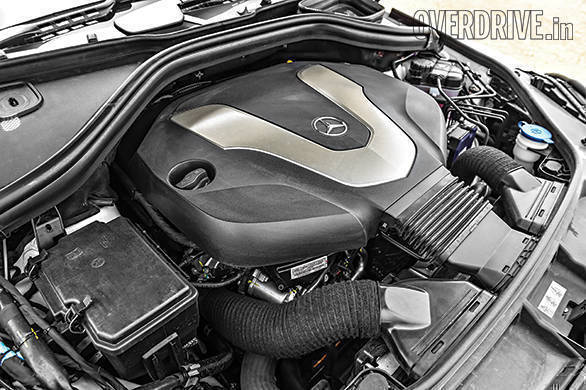 The Mercedes' engine is more powerful and refined

Now you don't need to be a Mensa member to know that 150Nm of torque is a serious advantage. But there's a surprise lying in wait. While the freight train torque propels the GLS to 100kmph in eight seconds flat, the Volvo doesn't lag too far behind. The XC90 manages the 0-100kmph run in 8.4 seconds. How does it manage this? Weight loss, of course. The Volvo is over 500kg lighter than the GLS! No Mensa membership required, again, to know this is a huge advantage. So, what could have been a serious disadvantage in power output turns out to be not so much after all. Even in terms of top speed, the difference is too minor to make a hue and cry about. The GLS clocks 209kmph and the XC90 does 204kmph. 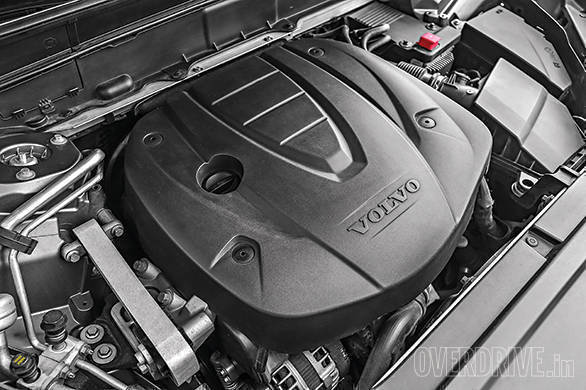 However, where the GLS' big engine and heavy kerb weight combination lets it down is when it comes to fuel efficiency. Where the GLS returns 8.98kmpl overall, the XC90 returns 12.56kmpl. That's over 3kmpl that cannot be ignored. That said, the GLS does have better insulation from NVH. This makes the Volvo, which in reality isn't all that unrefined, seem a lot louder. 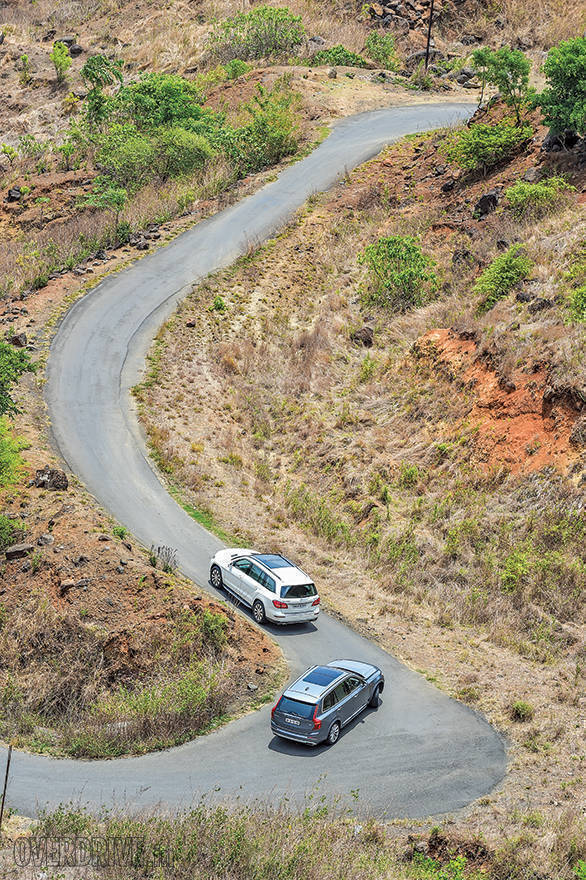 So yes, if I had a crore of rupees lying around which SUV would I choose? The GLS would cost me a total of Rs 1 crore. But if I had to buy an XC90, the price would go up to Rs 1.07 crore (both on-road, Mumbai). The question really is whether the XC90 is worth the extra money. The GLS brings a lot to the table. It's more spacious, has better ride quality, is more powerful, has reasonable yet luxurious interiors, and has a great network for service and repairs. Most importantly, GLS feels like a proper SUV. The XC90 on the other hand looks great, has great features and handles a lot like a car. But the car feels a lot more delicate when compared to the tank that is the GLS and Volvo's service network isn't the best. So if you're the sort of rich person who lives in a metro, wouldn't mind the lack of service and likes having a brand like Volvo in his garage (or have owned the old XC90), you will love the XC90. But I'm going to spend my imaginary money on the Mercedes. I can do without that moat and the dragon. I'd prefer just having a luxurious tank. 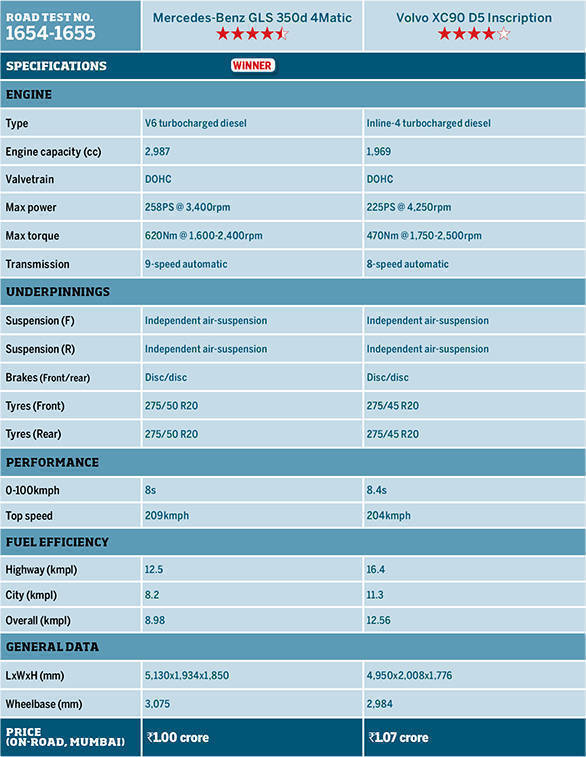 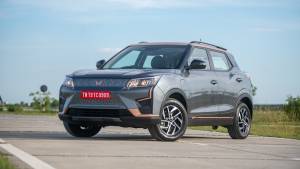 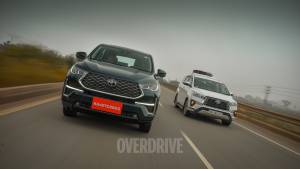