It's always a pleasure to see a company's identity unsullied by new owners. Despite Chinese ownership, Volvo has ensured that the new XC90 is very much a Swedish machine. We've spent a couple of days with the flagship SUV and discovered a thoroughly impressive machine under the snazzy new skin.

Parked next to an old XC90 it amazing to see what progress does. Besides some subtle similarities in the windowline and tail lamps, the new XC90 is almost entirely unique and quite stunning to my eyes. There's not a single unnecessary line on the body and it is a design that is striking without being weird. The shape is taut and muscular without any of the curviness from the old SUV. The 'Thor's hammer' headlamps look stunning alongside the large oval grille, which if you peer through, you'll see that all the air intake areas are shut off. They open when the engine needs to breathe or cool and shut off at cruising speeds to improve aerodynamic efficiency, and thus fuel efficiency. It's not just a pretty face, and has a sleek rear end with those large chiselled LED lamps and quad exhausts. Just like the V40 I drove a couple of months ago, the XC90 turns heads like no other car in its segment. The XC90 is nearly 5m long but conceals its bulk well and doesn't come across as a behemoth like the Mercedes-Benz GL. The insides are a similar story - handsome, well thought, out and clutter free There are three leather shades available - black, beige(what you see here) and blonde. The dash is garnished with lovely non veneered wood. Leather and wood are great but Volvo added some drama with a diamond knurled finish for the metal knob that you twist to start the car and the driving mode scroll wheel. Where your average luxury SUV would have about 30 buttons on the dash the XC90 has just eight. The rest is all taken care off by Sensus, Volvo's new in-car OS that works off a large 9-inch touchscreen display. The screen lies in the multilayer, leather wrapped dashboard and it responds very well to the touch, even with gloves. It is, however, a massive fingerprint magnet.

Sensus is a very comprehensive system that allows you control over every aspect of the car, be it media, airconditioning, seat position, driving modes or assistance systems. I found the system throws up large amounts of information on the screen which is confusing and will take a while to get used to. Sensus works with the all digital instrument cluster as well. It's console has customisable themes but isn't quite as crisp and versatile as the system in the latest Audis. 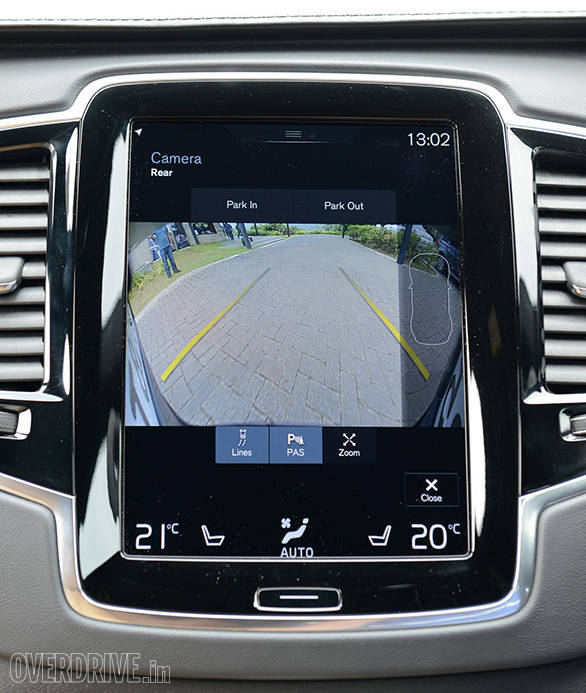 More Scandinavian minimalism shows in the leather wrapped key fob that has all buttons hidden away on the sides. Volvo also throws in an extra waterproof key fob on a lanyard that you can carry if you are going anywhere with the possibility of getting wet. How thoughtful is that? Where the top end Inscription model really scores is in its 19-speaker 1400watt Bowers and Wilkins sound system - one of the best car systems I've heard yet. In terms of sheer comfort, this is a fantastic cabin. It's airy thanks to the huge sunroof and the large windows ensure that visibility is excellent. The front seats have been designed with inputs from orthopaedic doctors and are heated and cooled as are the contoured reclinable seats in the middle row. The spacious middle row gets two zone climate control which can be adjusted via a touch screen control. The centre seat in the middle row can be used by grown-ups but features a unique upward folding squab that allows a child to sit higher which Volvo says is good for safety and also allows the child to enjoy the view outside. Even the third row is reasonably spacious for short distances. Boot space is sufficient with the third row up and massive when folded down.

The new Volvo XC90 has one engine option - a new 4-cylinder twin turbocharged diesel that displaces just 2.0-litres. This is a considerably smaller motor than the V6 diesels from the competition and it shows on paper, with just 225PS and 470Nm. Despite the lower numbers, the engine is actually quite likeable. It has a linear spread of power that builds from under 1,500rpm but it is also eager to rev out all the way to the 5,000rpm redline. The motor feels peppy but you do miss the sensation of huge bottom end torque that the V6s offer. Cabin insulation is excellent and under hard acceleration the motor produces a smooth and likeable roar. Sadly, the sporty rumble of an exhaust note that we loved from the old 5-cylinder Volvo diesels is gone. 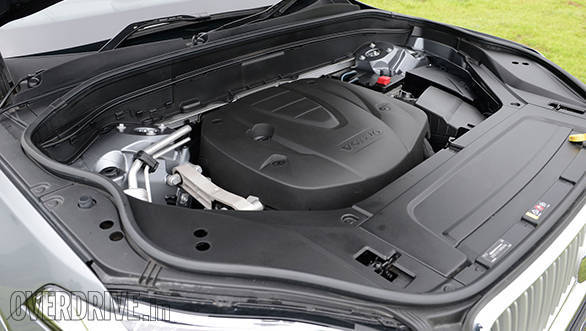 Power is sent to all four wheels via an Aisin 8-speed automatic. The box is smooth and snappy between gears but I found that getting off and then back on the throttle generates some lag as the gearbox ponders on which gear you need. The lack of paddle shifters or a Sport mode for the gearbox means having to use the gear selector to manually shift if you feel like it. 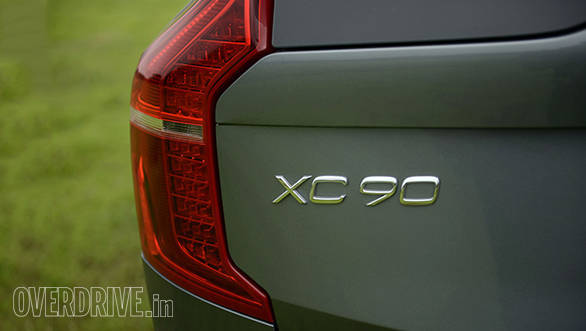 Our tests recorded a 0-100kmph run that took just under 9s; decent but way off the brisk 7.3 seconds it takes the BMW X5 to hit the same speed. Performance is more than adequate, but I suspect the Volvo XC90 may struggle a little with fast overtakes or on steep inclines when fully loaded. The overall fuel efficiency of 12.56kmpl is respectable for a 2-tonne, 5m long vehicle, but again, not considerably better than the X5.

Air suspension is standard on the the Volvo XC90 in India. Ride is magic carpet smooth on good roads and stays comfortable on slightly rough and scarred surfaces. On these 20-inch wheels it does have a firm edge on broken surfaces and the rear tends to thud through sharp potholes.
Switching from Comfort to Dynamic mode weighs up the steering and suspension but the change isn't drastic. Pushing the XC90 generates some body roll but it is well restrained and there's masses of grip thanks to the all-wheel drive and fat 275 section rubber. It is capable but the XC90 would much rather settle into a gentle cruise. 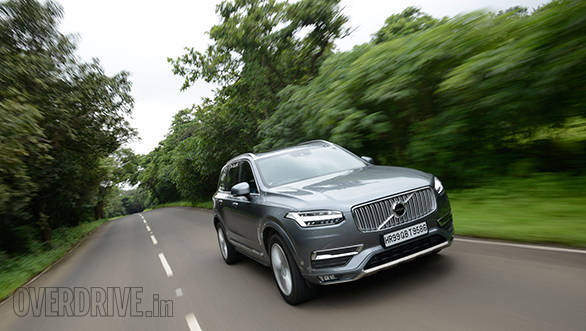 There's also an off-road mode that works below 30kmph. It raises the ground clearance by 30mm from 238mm to 268mm and primes the gearbox and throttle maps for low speed response. While this isn't a hardcore mud-plugger it should handle anything most owners will throw at it, mining barons included!

I hopped into the old XC90 for a bit and found the new one feels bigger, faster and more refined. The only thing I missed was the old hydraulic steering - that lovely weight and feel being something from a bygone era. Still, the light and direct steering helps place the XC90 well and it doesn't intimidate much on narrow country roads despite being longer than the latest Q7.

The Volvo XC90 starts at Rs 64.9lakh ex-Delhi for the Momentum and jumps a sizable amount to Rs 77.9lakh for the Inscription. Where does all that extra money go? A large chunk would be towards that spectacular sound system but the other features add up too, like the fine Nappa leather, head-up display and heated/cooled front and middle seats. The heart yearns for the Inscription but simple math says that the Momentum is an excellent deal. It has the air suspension, full Sensus system, big sunroof, a 10-speaker 330W sound system and also comes with smaller 19-inch wheels, which will only improve the ride quality. 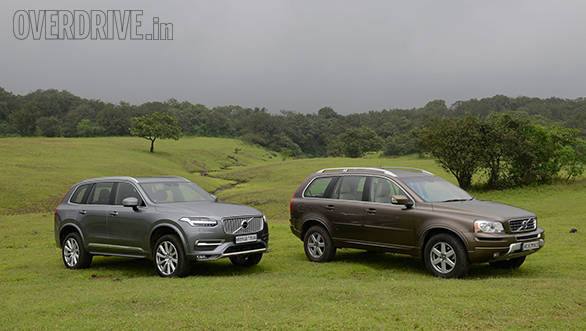 Momentum or Inscription, there's no doubt that the XC90 stands out from the crowd and that it's interiors feel unique and special, much more so than the typical German cabin. It's no driver's car but it is an absolute pleasure to be in. Volvo already has 266 bookings, more than half the allocation of cars for India this year. There's no doubt the XC90 is going to do good things for Volvo in India. It deserves to.