Mercedes-Benz is on a roll in India. It has become the largest luxury car maker, and to keep this position it has been introducing lots of new products. One more, the new C-Class Cabriolet, will make it here by the end of the year or the beginning of 2017 and we sampled it recently in the beautiful coastal town of Trieste, situated in northeastern Italy.

It is the first ever cabriolet in the history of the C-Class, and had its global unveiling at the Geneva Motor Show in March earlier this year. The C-Class is a handsome machine, and the cabriolet version is even more striking and better looking, especially when it is topless. It has a fabric soft top, which can be raised or lowered in some 20 seconds while the car is moving at speeds of up to 50 kph. 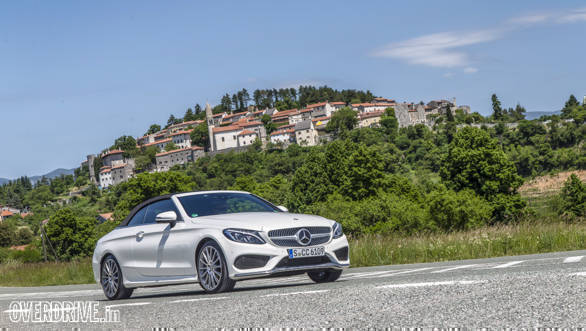 The standard soft top is black, but can also be ordered in dark hues of red, blue, or brown. All the fabric roofs come with a glass rear windscreen. We did find that the top sealed up everything quite nicely, but obviously a metal top would do a better job of it. But Mercedes-Benz who were amongst the first to put a folding metal roof on a production car, say that they have gone in for a fabric top as it's more traditional. When this top with heritage value is folded down, it reduces boot space from 360 litres to 285 litres. A metal top would obviously have taken up a lot more of the boot space. 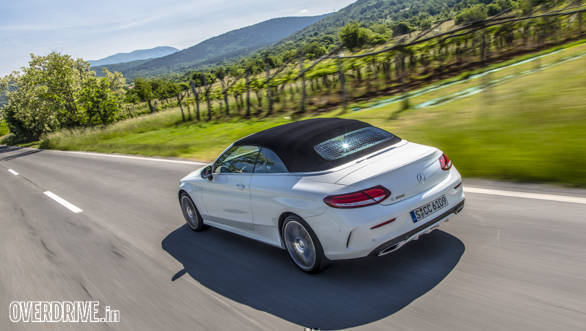 The Mercedes-Benz C-Class sedan has won a lot of acclaim for its suspension setup, ride and handling and overall dynamic handling. Removing the metal roof meant that the engineers had to make many structural reinforcements to ensure proper structural rigidity in the cabriolet version. While the sedan's body is obviously far stiffer, we did not find the cabriolet lacking in rigidity either. 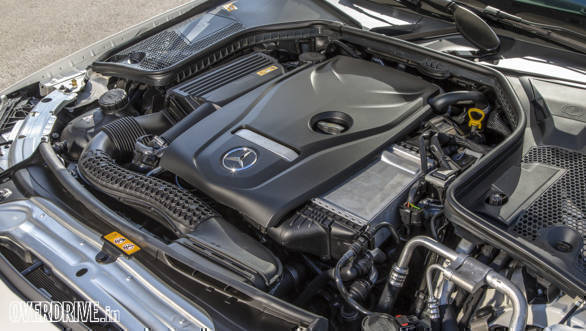 The interior of the cabriolet is just as good as that of the sedan and boasts of top quality materials and fit and finish. As is to be expected it comes packed with features, especially many Mercedes trademark safety ones. In addition the cabriolet gets features like Mercedes-Benz's Airscarf neck-heating vents and a climate-control system that blows warmer air onto the driver's hands when the top is down. 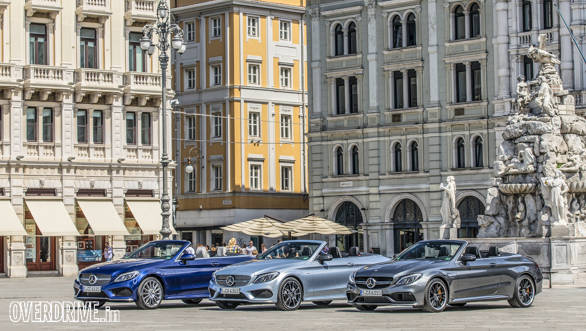 There is also something called 'Aircap'. It consists of an air deflector incorporated into the windscreen frame and a screen positioned behind the rear seats. At the push of a button they both deploy and work together to reduce turbulence inside the cabin. The air deflector pushes the air above the open cabin, and the screen prevents the air from entering from the back. All this ensures one can motor in comfort with the top down, even on a cloud windy day like we encountered while in Trieste. Fortunately the weather opened up on day two and we could enjoy our top down drive around Trieste. The drive route also took us across the border into Slovenia, where the countryside is very pretty and the roads far narrower. But fortunately traffic was light. 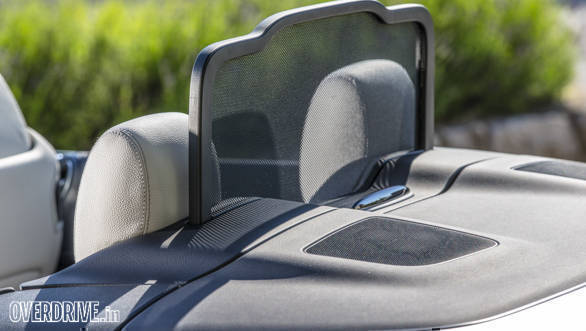 The C-Class Cabriolet comes with six petrol and two diesel engine options and we are told the one that will make it to India is the C 300 powered by a petrol 1991 cc, 4 cylinder turbocharged engine making 245 bhp and 370 Nm of torque. It is mated with the super efficient and extremely flexible nine-speed automatic gearbox. The C 300 is driven by the rear wheels, with the Mercedes 4MATIC four-wheel- drive system available as an option, but we are not sure if this will be offered in India. The C 300 accelerates from 0 to 100 in 6.4 seconds and feels fast, agile and composed. As mentioned earlier, the C-Class sedan has garnered appreciation for its polished road manners and the cabriolet version with its lower suspension setup is a sharp handling machine too, ever eager to change direction and deliver on driver inputs. The ride quality, especially in comfort mode is good and deals with road undulations in an impressive manner. 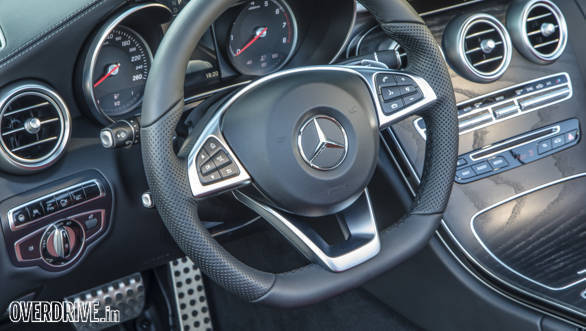 While in Trieste we also had the opportunity to sample the AMG C-Class C-63 S Cabriolet. Powered by a petrol V8 Biturbo engine it gets to 100 in little over 4 seconds and while its furiously fast, what's most delightful is how it releases its horses and gets them to gallop. Driving with the top down also allows you to enjoy the enthralling exhaust note. Interestingly, we drove through Lipica in Slovenia, home to the Europe's oldest stud farm, continuously breeding the ancient Lipizzaner horse breed strain since 1580. 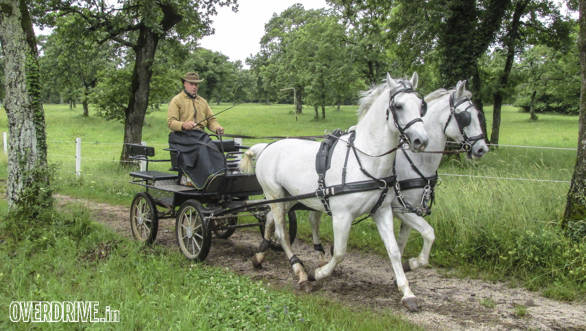 In 1996, the Lipica Stud Farm was also declared a cultural monument of outstanding importance for the Republic of Slovenia. The Rough Guide to Slovenia says, "Starting in the 1580's, horses of Spanish, Arabian and Berber stock were bred with the tough and muscular local Karst horse, to create the Lipizzaner strain. Relatively small in stature with a long back, short thick neck and powerful build, this horse is born dark in colour, gradually becoming lighter as it matures, and finally adopting the pristine white coat that is its hallmark around the age of five or six. These distinctive physical traits are complemented by a beautiful sense of balance and rhythm, a lively, high stepping gait and an even temperament. With such qualities, the Lipizzaner have for centuries excelled in both carriage driving and as show horses".

The C-63 S Cabriolet is also powerful and well balanced and packs hosts 510 horses under its long bonnet. But I am not so sure about its even temperament. Floor the throttle and the front wants to overtake the back. Acceleration is instant and the thrust so direct that you become part of this surface to surface missile. Given all this, we were indeed fortunate to see the Lipizzaner horses at the historic stud farm while driving the new C-Class Cabriolet. We also saw a carriage being drawn by these strong and elegant horses and stopped our own C-63 modern day horseless carriage, and pushed down on the pedal and played the sonorous and intoxicating exhaust note to entertain the Lipizzaner horses. Strangely they did not appear impressed, maybe because of their long lineage and royal upbringing. 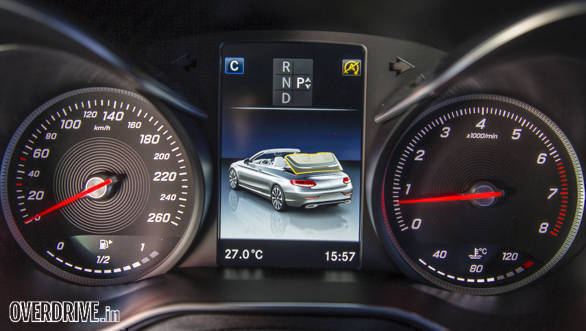 While I thoroughly enjoyed driving the new Mercedes C-Class Cabriolet with the top down on the coastal roads in Italy and the country roads in Slovenia, I doubt if I will enjoy the experience as much back home in Mumbai. Simply because it's nowhere as pretty and more importantly as the air is polluted and full of dust, dirt and other irritants. To really enjoy top down motoring in India, you have to head up into the mountains or forests. In the cities one will only occasionally drive with the top down. Given this, though the cabriolet is a really nice car, it surely won't become as popular as the C-Class sedan. One can also expect it to be priced fairly higher than the sedan. 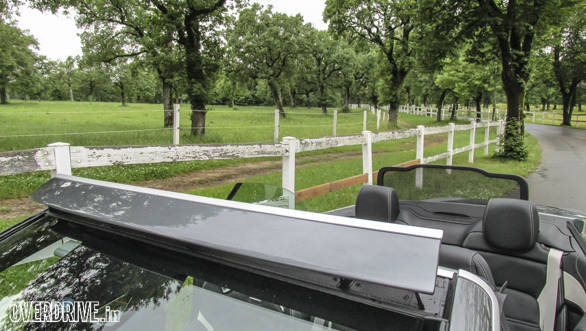 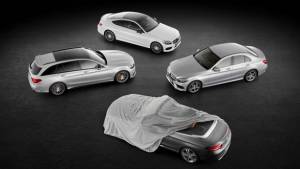