How much will the range be? Can we finish the shoot without the car going into limp mode? These were some of the questions which were running Suresh's and my mind. After all, it's not everyday you drive a pure electric car with minimal experience of how these things work. These doubts were accompanied by conversation about how oil barons have done their level best over the years to stall the development of EVs. The questions kept arising, and we quickly realised that there was only one way to get the answer. With a thorough analysis on the road and a small prayer not to run out of juice! 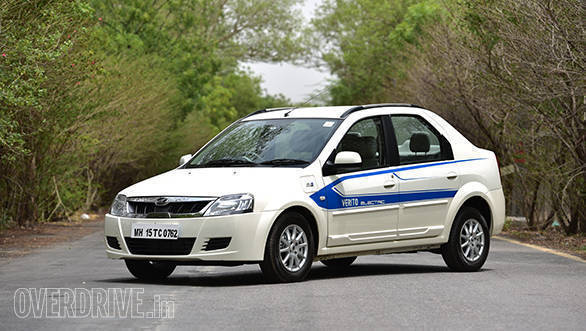 The Mahindra e-Verito looks fresher than its eight-year-old design would suggest. There is an extra dash of something on the grille that Indians usually like  chrome. It sits atop the bumper. Other parts including the sides and rear are identical to the conventional powered sedan. However, peek closely and you will find the electric Fast Charging port in a fetching silver and blue colour on the left front fender, along with a big blue decal screaming 'Verito electric'. Similarly, at the rear, there is a green 'e' ahead of the Verito badge and an 'Electric' motif. Strip the car of the badges and the charging port, and you're left with a regular Verito.

Since this is an electric vehicle, there are many changes inside the cabin. This includes the large dial with a brushed aluminium ring surrounding it. There is also a small blue backlit digital unit that shows the mode you've selected for driving the car. Flanking it are the State of Charge (SOC) and the efficiency meters  both represented by simple bars. A single-din music system that supports AUX and CDs handles the infotainment part. It isn't easily visible on the go as it is placed very low. The glovebox is fairly large and illuminated too. Sadly though, the e-Verito lacks modern gadgets that we have so become used to  steering-mounted controls, touchscreen multimedia system, climate control et al. There is also no height-adjustable driver's seat, electrically adjustable ORVMs or even proper bottle holders in the door. 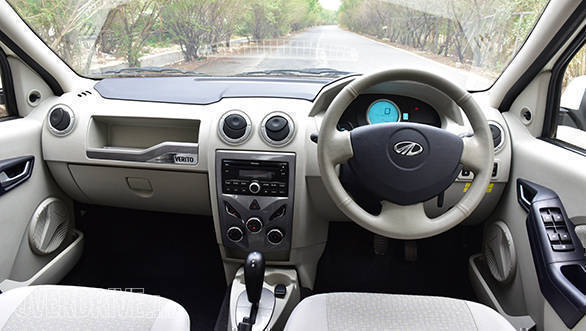 Mahindra though has retained the USP of the Verito  comfortable seating for five and a large boot of 510 litres. How isn't the boot space compromised, given that this is an electric car and the batteries are expected to be at the rear? The Li-ion battery pack is placed right where the petrol/diesel motor used to be, helping retain the boot space from the regular sedan.

The Mahindra e-Verito is powered by a 3-phase 72V induction motor that promises 30.5kW of power and 91Nm torque. A single-speed transmission transfers all this power to the front wheels. The 200Ah Li-ion battery in the car powers all the ancillary functions, including the music system, AC and headlamps. It also charges the 12V battery which is used for the start up. Starting the car is also an art in itself. You turn the key, but it doesn't go all the way like in your conventional fuelled car. 15 seconds after turning the key, you hear a slight noise  a subtle ding from the rear of the car, signalling that the car is ready now. After this audible cue, you have to press the drive button located on the lower right side of the dashboard. At this point, the car starts to creep forward. For further progress, select F on the gear lever and you start to move ahead at a reasonable pace. For an additional boost, shift to the B mode which is the phase that I preferred to be in for the entire duration of my drive. In this mode, you get a slight boost. That being said, even in B mode, the driving experience is quite sedate and I wouldn't really call it an electrifying. 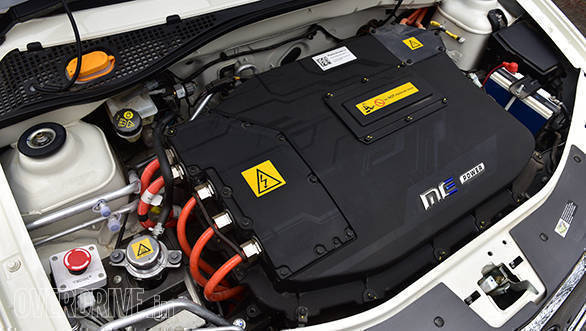 The Mahindra e-Verito takes a fair bit of time to climb to 40kmph from naught, not ideal for quick getawaysor if you plan on robbing a bank. Mahesh Babu, the CTO of Mahindra Electric, claims that the 0-40kmph as well as 0-60kmph sprints are much faster than what one can achieve in the e2o. The maximum speed I managed to see was 56kmph and it took some time getting there. Achieving Mahindra's claimed top speed of 86kmph will take both a long time and a long stretch of road. 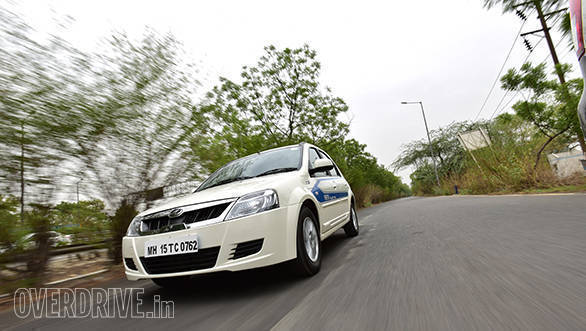 Mahesh said that during the development of the e-Verito, the focus was to build an affordable everyday electric sedan and not to compete with Tesla in any regard. This is clear from the 110km range that Mahindra quotes for the e-Verito. This claimed range though was achieved with two people on board in Mahindra's internal tests. He said that in ARAI's test, the real figure was relatively high, somewhere around the 130km zone. But then again those were in controlled conditions. There clearly is no speed at which Mahindra's claimed range was achieved, and Mahesh says that in everyday driving, the e-Verito should give 90km driving range. If the need arises, Mahindra is ready to give a e-Verito with a higher range and better top speed too. The test car came to us with 80 per cent charge. After driving for about 20km, it dropped just one bar on the meter. We will need more time with the car to properly conduct tests on the performance and driving range. 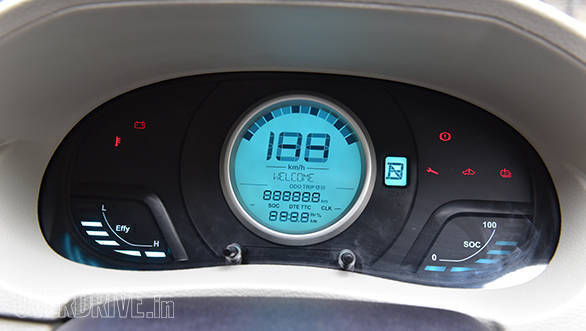 There is the usual gadgetry associated with a Mahindra electric car  Revive, Fast Charge, Boost and brake energy recuperation. Revive gives you an additional bit of range when the charge is very low, about 5km which should be enough to get to a charging point in an urban setting. Then there is Fast Charge that uses a built-in ME fast charging port to reduce the standard charge time of eight hours to just one hour and 50 minutes. There is no special installation required for the Fast Charge. However, this feature is only available on the top D6 model. Brake energy regeneration is part of the package for all the electric as well as some hybrid cars. This ensures that the kinetic energy, which is generated when the brakes are applied, are stored as potential energy to be used in the future. This also includes charging the battery pack.

Unfortunately, the lack of ABS and airbags even as an option is a significantly glaring omission. 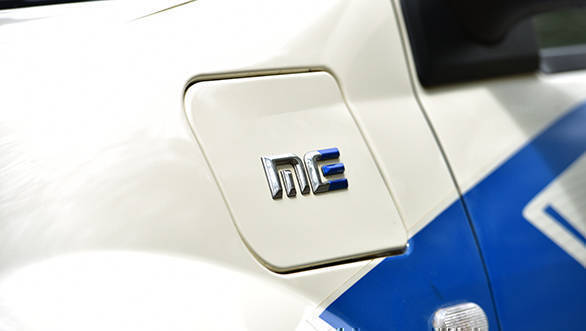 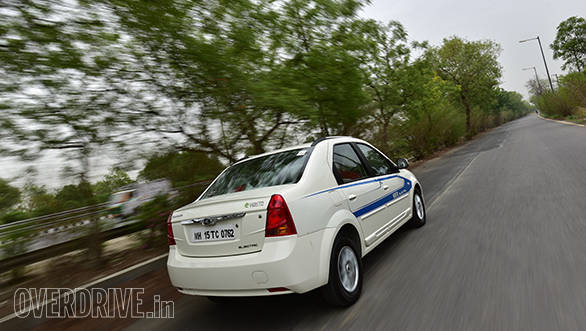 To be honest, I got to drive the e-Verito for only a couple of hours, and because of the aforementioned range anxiety, we didn't take her far from the confines of Delhi's smooth tarmac. Not much has changed from the stock Verito in terms of suspension hardware, and the gross weight (kerb weight is 1,200kg) of 1,700kg is only 70kg more than the the standard Verito. As expected, ride quality remains comfortable, but I did feel that the steering felt a little heavier than the standard Verito. Special mention must be made here about the brakes. They were super sharp and had to be only feathered to bring the vehicle to a halt. 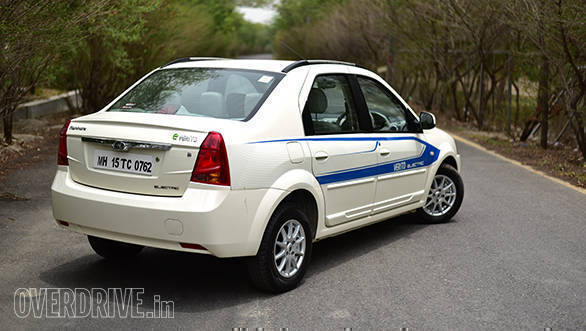 The e-Verito might just be what we need in this hour of increasing pollution and the need for clean air to breathe, and is the ideal way to avoid the odd-even rule if it crops up again. It's also a much more realistic EV to own than its sibling, the e20, but it demands a premium for this. Mahindra says that its electric vehicles sell through word of mouth and the subsequent price reduction through the FAME scheme is also encouraging sales. However, given the infrastructure crisis right now (Mahindra claims to have identified close to 200 points across the country for setting up charging stations), it makes sense to have a hybrid rather than a pure electric. Mahesh agrees too and says that infrastructure is the main hindrance as of now. But the e-Verito wasn't built to be a mass product. It just shows the manufacturer's prowess at building electric vehicles and intention to further pursue this path. And that's not something almost any of its rivals can lay claim to. 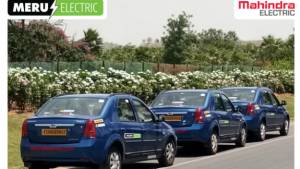 Mahindra e-Verito to be launched in India on...
Advertisement