If you had asked Jaguar in the '80s to make an SUV, the good folks at Coventry would have probably called you something along the lines of a bloomin' plonker and told you to sod off. But over the past decade, the demand for the SUVs around the world has grown drastically. So drastically, in fact, that it's forcing manufacturers  those who've primarily been building sportscars, supercars and luxury sedans  to rethink their strategy. The strategy has worked so well for Porsche that it practically turned its fortunes around. But the segment is already so crowded that to really be able to cut through the market, these companies need something that stands out from the crowd. 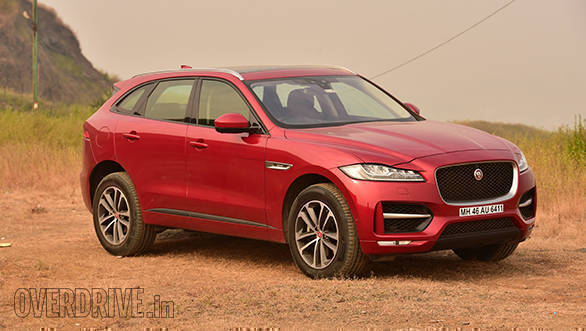 Enter the Jaguar F-Pace. It's the brand's first representation in the SUV space, one they're calling the most practical Jaguar sportscar. It happens to be damn good-looking too! It's now here in India, and we put the R-Sport variant to the test to find out that it's more than just a pretty face and holds true to Jaguar's claims.

Hot would be the ideal word to describe how the Jaguar F-Pace looks. Not handsome or elegant or beautiful  just hot, especially in that red hue. To give it a familiar face, the F-Pace has a broad grille, sleek headlights and muscular bulges running along the bonnet. Despite resembling all the other Jags in the line-up, the F-Pace still manages to look very SUV-like. 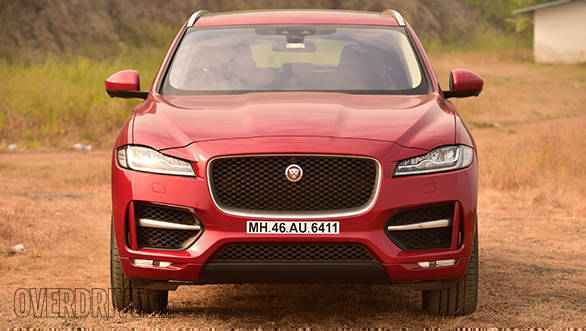 The side profile is rather simple with just one crease along the bottom half of the doors. However, those big bulges around the wheel arches make it look good in an almost feminine way, which is a welcome change from the boxy and butch design cues we usually see on SUVs. The roofline, although not sloping too sharply, has been designed to look so, thanks to the pinched window line and the high bulge on the rear wheel arch. 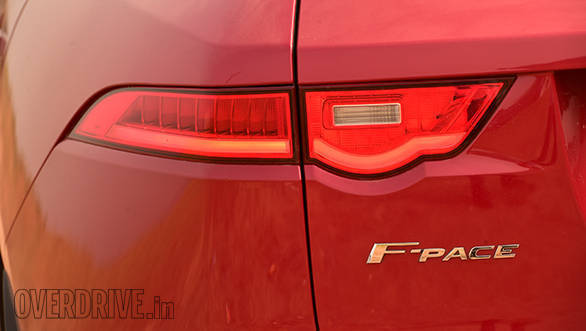 This arch meets the gorgeous wraparound tail lights and flows neatly to the rear, which is clearly inspired by the F-Type. This is probably the best angle of the car, with the angled top-half of the tailgate and bulged wheel arches highlighting the width. Quite simply put, Jaguar has managed to design the F-Pace with a perfect combination of sleek and curvy. 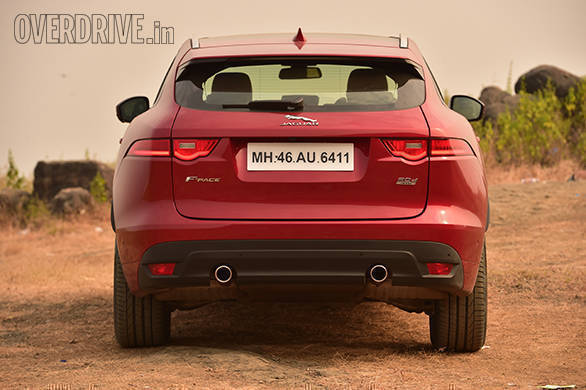 If you've been finding it hard to pry your eyes off the Jaguar F-Pace to read this, I understand. It took me a full 10 minutes of staring before I even stepped inside the car. The centre console's highlight is Jaguar's 10.2-inch InControl Touch Pro system and below that are the air con controls which are surrounded by a piano black trim. While there were a fair number of storage spaces placed around the car, most of them aren't too large or usable.

The red and black theme on the seats and door panels along with the red contrast stitching on the dash add a sporty touch, while the well-placed ambient lights make the interior look a lot nicer at night. During the day, however, it's a bit disappointing. The whole affair looked a bit too ordinary for my liking, especially after being wowed by the exterior. Sure it's neat, functional and built well, but it lacks a bit of the flamboyance you'd expect from a car in this class. However, the interior of the First Edition variant, which I saw on the brochure, looked a bit more premium with the tan leather seats and wood trims around the rotary gear knob and door panels. 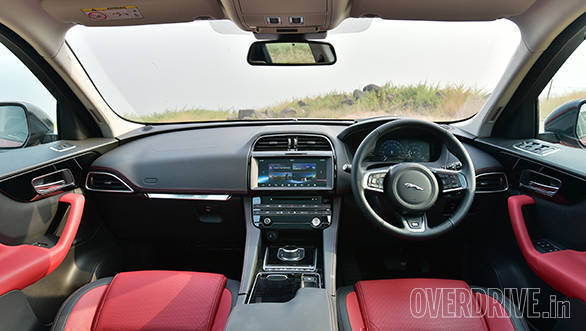 The seats are pretty comfortable and well contoured, while rear knee room is adequately comfortable but not at luxury limousine levels. Boot space on the other hand isn't very impressive, and the full-size spare, although neatly concealed, eats a little into that.

The Jaguar F-Pace R-Sport is powered by a turbocharged 3.0-litre V6 diesel which puts out 300PS from 4,000rpm and 700Nm of torque at 2,000rpm. It's a very responsive engine, and the level of refinement is impressive even at high speeds. Power delivery is very linear and the car picks up speed so effortlessly that you're doing illegal speeds without even realising it.

The 8-speed ZF transmission is equally responsive and smooth, delivering downshifts as soon as you demand it, making overtaking effortless. That said, it still isn't quite as quick as the DSG units you find on the Audis. The transmission gets a Drive mode  which upshifts early  and a Sport mode  which holds on to a gear for longer.

The thrum of the V6 is barely felt or heard most of the time, but you do hear that bass gurgle every time you gas it hard. And when you do so, the car lunges forward and shoves you back in the seat. However, keep the throttle input light, and it will maintain a steady and comfortable pace in town. The engine characteristics can be altered by choosing one of four modes  Dynamic, Normal, Eco and All Surface Progress Control (ASPC). 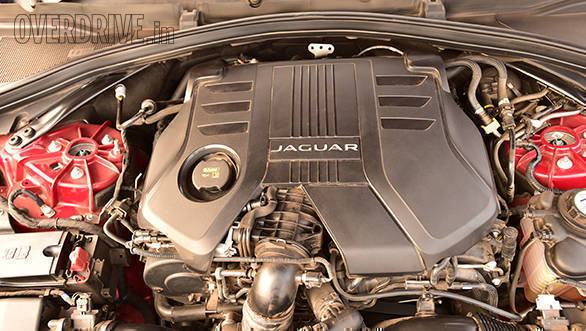 Dynamic mode improves engine responsiveness and increases throttle sensitivity which is ideal for some spirited driving. Normal, which still keeps the engine quite responsive, works well for cruising on the highway or around the city. The Eco mode doesn't really bog the car down, works quite well in the city and isn't a bother on the highway either. In this mode, the F-Pace returned an efficiency figure of 8.91kmpl in the city and 14.78kmpl on the highway which isn't too bad for an engine this big. The ASPC is a low-speed cruise control system used in low-traction surfaces, and works between 3.6-30kmph. The speed of the car is controlled by the cruise control switches on the steering, so you don't make sharp throttle inputs which could cause loss of traction.

Although the engine has left me quite impressed, especially in terms of refinement, it's also let me down a bit. Don't get me wrong here. It is quick  0-100kmph in 6.8s kind of quick. But with a name like R-Sport, you'd expect some amount of drama and violence when you floor it to compliment that title. That's something that maybe the 380PS supercharged 3.0-litre petrol could have offered, but unfortunately we don't get that one in India yet. The other engine option for the Indian market is a 4-cylinder turbocharged diesel engine that makes 180PS and 430Nm.

If there was one thing that impressed me most about the Jaguar F-Pace, it would be how well it handled the twisties. The level of grip provided by the all-wheel drive system is simply astonishing. The F-Pace also features torque vectoring by braking which keeps the car stuck to the road at surprisingly high speeds. Unlike torque vectoring differentials, when this system detects that the car is going too fast around a corner, it applies the brakes individually to the wheels which are on the inside of the corner, thereby reducing their speed and allowing for a sharper turn-in and reduced understeer. Essentially, the F-Pace begs for you to push it hard around the corners just to show off how well it can handle it. The brakes are too set up perfectly to be progressive, but with good initial bite.

The suspension set-up further adds to the Jaguar F-Pace's cornering ability. Although the damping does allow for a small amount of body roll around a fast bend, the car still feels very controlled. This movement is necessary to maintain comfort levels, which is evident over the undulations on the highway. The damping is very well judged and absorbs broken roads and undulations without any complaints. The tyres, a very sensible set of 255/55 R19 Pirelli P Zeros, make a big difference to the ride and confidence over the broken roads in the city. However, like with the most high-end SUVs, the F-Pace does feel a bit firm when driven fast through larger ruts and holes. 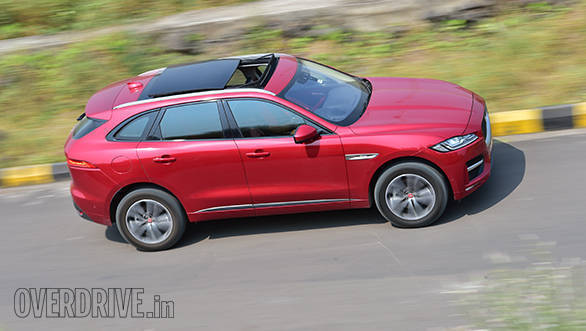 The steering, meanwhile, has very good feel and is very precise, especially on the highway. However, despite weighing up in Dynamic mode, the steering does feel light around the centre at very high speeds, we're talking 150kmph and above. At the same time, the unit feels comparatively heavier to use in the city than the electronically assisted units in the Audis and BMWs, but that's just me nitpicking a little.

What the R-Sport misses out is the Adaptive Dynamics system, which is standard on the First Edition variant. This system, according to Jaguar, constantly analyses acceleration, cornering, throttle, and braking activity and adjusts the active dampers to offer a better ride. It apparently analyses steering and body movement 500 times a second. The F-Pace R Sport comes with standard non-adjustable dampers.

The F-Pace is rather well equipped in terms of features. The R-Sport's 10.2-inch infotainment unit is quite impressive with good resolution, neat animations and decent touch response. This system is linked to a fabulous 11-speaker 380W Meridian sound system but can be optioned with a 17-speaker 825W Meridian system (standard on the First Edition). While it uses Jaguar's InControl Touch application to sync your phone, things would have been a lot simpler if it just supported Apple CarPlay and Android Auto. 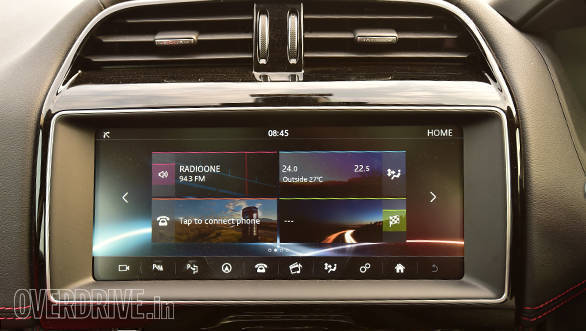 The 12.3-inch digital instrument cluster, which is also standard on the R-Sport, also has good resolution and offers quite a bit of information. While using the navigation system, which worked quite well in Mumbai, a large graphic appears on the unit indicating which direction to take. Additionally, settings can be changed to primarily display navigation data, while vital information is moved to the bottom of the screen. 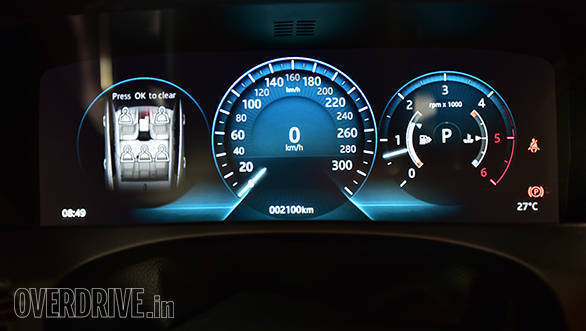 Given the price, I do feel that the F-Pace could offer more in the safety department. Of course, it gets the standard suite of features like six airbags, traction and stability control, adaptive LED headlights and emergency brake assist system. While this is certainly far from bad, it seems a bit less considering the price you're paying. Luxury cars at this price point offer advanced safety features like night vision assist and more.

The Jaguar F-Pace, despite its few shortcomings, is undoubtedly more than just a pretty face  it's quick and practical, and certainly manages to stand out from the barrage of SUVs that are entering the market these days. In fact, the car checks almost all the boxes necessary to be the perfect SUV in that segment. Almost.

By pricing the F-Pace R-Sport at Rs 1.59 crore (on-road, Mumbai), either by choice or for lack of one (the F-Pace is a CBU for now), Jaguar has simply let down the possibility of it competing with its natural rivals. Even the base Pure variant, with the smaller 2.0-litre four-cylinder diesel, costs a very steep Rs 92 lakh. In the UK, for example, an F-Pace variant similar to the India spec R-Sport is priced just under vehicles like the Mercedes-Benz GLE 350d and the BMW X5 30d. In India, the R-Sport is more expensive than these rivals by around Rs 60-70 lakh. At this price point, it is forced into competing with rivals beyond its depth of ability, serious rivals like the Porsche Cayenne Diesel or the Mercedes-Benz S 350d. 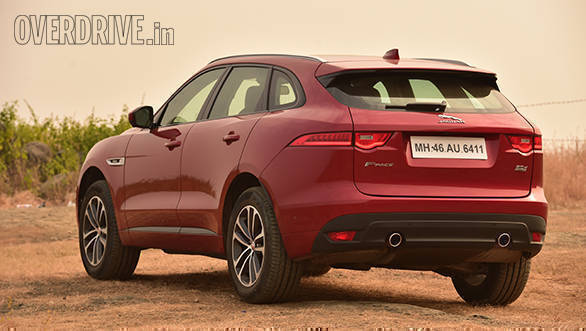 If you are okay with the price, we'd suggest spending about Rs 5 lakh more to get the F-Pace First Edition that offers considerably more kit. If not, like with the new XF, we suggest waiting until the car enters CKD production and achieves realistic pricing. But pace yourself, it's certainly worth the wait! 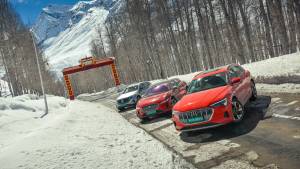