The leonine white-haired Aussie journalist sitting on the bus next to me says quietly, "Making the Street 750 showed a lot of courage on the part of Harley-Davidson." It's an angle I've never approached the Street from. He's right, of course. The bike represents a departure from the norm in every way possible for the traditionally traditionalist company from the United States. It must have taken enormous pressure and great fortitude for whoever signed off the project to hold his nerve and convince the bosses that the Street 750 was, er, the street Harley needed to go down.

I did really like the engine-chassis combination when we first rode it but we knew then that the motorcycle had room for improvement. The most glaring of the issues were the brakes which were amongst the most reluctant of all the disc brakes we have ever tested. They lacked feel and bite and they did produce brake force and then retardation but you needed Marv's forearms. 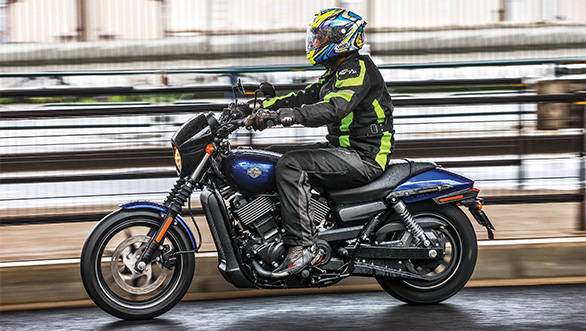 Well that's fixed. For 2016, Harley-Davidson moves to a completely new system from Brembo including larger 300mm rotors. Brake effort is now reasonable, lever travel is long enough to feel friendly and for the most past, modulating brake force is as it should have been on day one. Riding on sopping wet Tokyo urban streets, I never had more than two fingers on the brakes  a good sign  and stopping at the 50 million traffic lights on our test route was always assured and predictable.

Ah yes, the traffic lights. The Harley-Davidson 2016 motorcycles were introduced to us on the urban streets of lovely Tokyo because, as The Motor Company likes to point out, the Dark Custom theme  matte black paint, black details et al  is an urban phenomenon and in that sense, gritty, neon-y, neo-retro Tokyo was perfect to meet the new crop of Dark Custom motorcycles. Hence the million traffic lights.

However, I've two bones to pick with the new braking system. First, I'm a bit shocked that H-D did not roll out ABS in this iteration. The company will have to add ABS to the Street 500 soon  it heads to markets where ABS is either mandatory or will be shortly. But the 750 won't receive ABS till at least the 2017 model. This is a mis-step in my book. Our lack of legislation shouldn't have taken a back seat to the fact that most riders in their Dark Custom phase simply do not have enough skill and a system like ABS is what the doctor should have ordered.

I say this with some vehemence because on the day of the ride, a taifun was skirting the city, bringing continuous rain for the four-odd hours we rode the trio of 2016 models. Naturally, one must test the brakes in these trying conditions. So climbing the Tokyo Gate bridge - beautiful views - I checked my mirrors and started leaning on the brakes harder and harder. A locked front moments later told me what I needed to know. Despite the excellent Michelin Scorcher tyres on the test bike  we will continue to get MRFs which are great but not as grippy as the Michelins  I couldn't feel enough of the brakes to predict the lockup. ABS would have been ideal and I really, really, really think Harley shouldn't have taken this big step forward without adding ABS to the spec. 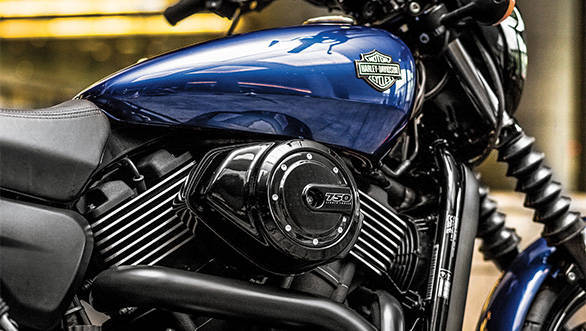 Brakes that work and new colours are the headlining new features of the new Street 750. Harley also received some feedback about the finish levels on the motorcycle and some work has been done on this front too. The horn - oddly placed on the 2015 model - has been moved to a nearly invisible new home. Our lead rider was on a 2015 model and I got a chance to compare the two bikes in detail and I was left underwhelmed. All the wiring that snaked around the bike still does and it is a little unfortunate that while finish levels have definitely moved up a couple of notches, Harley didn't do enough on this front either.

But the thing about the Street 750 is that the lovely torquey engine and a light chassis are soothing to ride and you get over the niggles. I would have liked a slightly shorter throw for the gearchanges but the 750cc V-twin and its 6-speed gearbox are otherwise terrific. Torque flows easily and getting through traffic is easy. Our bikes did have a little stumble at low revs but since they're Japanese spec, we were told the gearing was a wee bit taller for local homologation requirements.

Harley-Davidson India has sold 3,674 Street 750s in India (as of August 2015) since the bike arrived and it is now overwhelmingly the most popular of its models in India. In keeping with the company's tradition of evolving steadily, the 2016 Street 750 retains all the nicest sensations of the motorcycle, fixes one critical area and touches many others. In that continuum's terms, I think, nothing has changed. A good bike is now better and hence its sales should be too.

For more stories from OVERDRIVE on the 2016 Harley-Davidson Dark Custom lineup, click here.