There's something about the Heritage that touches you. And I'm not alone, I asked Harley-Davidson India's new chief, Vikram Pahwa what he was riding. Yup, a Heritage it is. But he has the old one. I've the new one here and I think he should be envious. Fleetingly if nothing else - he is the boss, right?
So what's new. Apart from slick new colours, the 2016 Softail is a post Project Rushmore motorcycle. The Project was Harley-Davidson's initiative to make those bikes better overall and easier to use. The program is credited with improving many, many things across product lines, not just drivetrains. 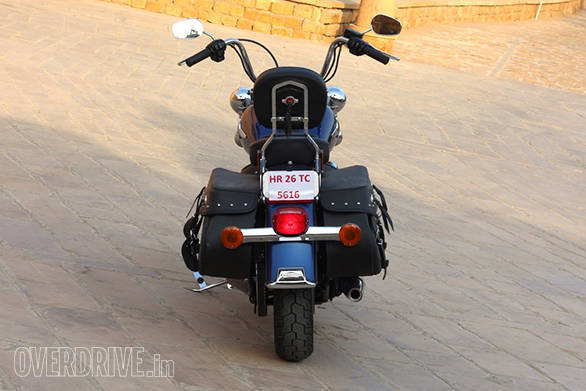 The Harley-Davidson Heritage Softail has a distinctive profile with its high sissy bar, fringed leather saddle bags and tall bars. It is one of our favourite Harleys of all time

To ride, the Heritage is familiar. The fuel injected TwinCam 103 engine, unlike on the a touring family, is un-counterbalanced. This means more vibes but the Softail is tuned to give you the experience not the shakes. The engine also makes a smidgen more power (you won't notice it easily, I promise) in the process. But in feel, the Softail feels looser and older, which naturally fits the promise it makes. It feels so mechanical in some ways that it is easy to forget that this is now a ride-by-wire motorcycle.
The engine is pretty quick too. It makes 132Nm at 3,000rpm which mostly means you can trundle or munch miles in high gears. But more often than not, it means being pressed hard into the seat step when you roll on the gas hard. The bike has a six-speed transmission and even on our highways, you'll be in upwards of fourth gear for most things. The design guys reduced the number of studs on the 2016 Harley-Davidson Heritage Softail to create a classier nostalgic flavour. Enhancements from Project Rushmore and the design refinements produce a compelling package

Since this is expected to a full-on nostalgic styling exercise, the Heritage employs chrome liberally and unabashedly. The engine is chrome, the transmission cases are chrome, the horseshoe oil tank is chrome and the oil lines that run from it to the engine are chrome too. Flawless chrome does have its charm, though, so I cannot complain. More of the shiny metal covers the 41.3mm front forks. The final stamp of old-world charm is the hard tail styling which hides the rear shock under the bike. The leather panniers with their fringes complete the picture. A windscreen is standard and detachable. As with many Harley screens, their aerodynamics doesn't match my cruising speeds so I used it's quick-detach feature to leave it in the backup vehicle. That's why our images don't have the screen. For what it is worth, the screen is optically correct and should be quite useful on a cold day.
Under the fetching skin is a reasonably straight forward mild steel tubular frame with a box-section backbone and a tubular swingarm. The suspension doesn't feature any adjustability and now ABS is standard as is cruise control. 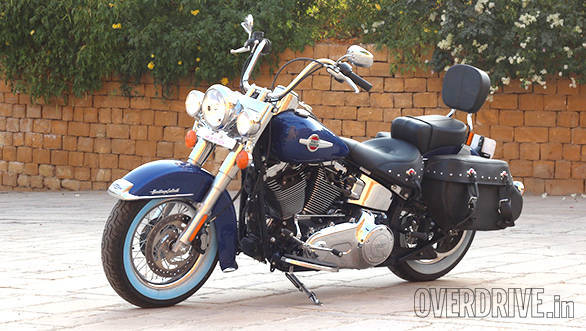 Triple headlights, the softail detail around the central headlamp and loads of chrome mark out the harley-Davidson Heritage Softail as a past-referencing Harley

The riding position had been tweaked gently but the Heritage is still a very comfortable highway machine. You settle into the two piece seat - you can remove the pillion seat and tall sissy bar entirely if you like - and not feel the road hours later. Ride quality is plush over good roads and good over intermediate roads. Like all the big Project Rushmore motorcycles, sharp-edged bumps invoke a twanging response that could be better. 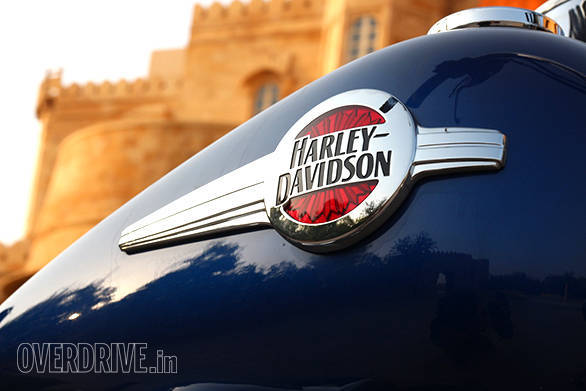 This red details repeats on the Heritage Softail on the seat sides as well as the sissy bar. It looks neat and as usual, the HD guys really know how to finish chrome and paint

And that word, perhaps, is what the Heritage is about. Response. The response it evokes from you as you suck your breath in and take in the charm of a retro-nostalgic brand immersing itself in full-on nostalgia. It's a powerful pull. For Rs 16.60 lakh ex-showroom Delhi, the Harley-Davidson Heritage Softail is a unique proposition. I think that Indian Chief comes close but the Chief isn't as old school as the Harley - which is a unique proposition all of its own. And the cheapest one is over Rs 10 lakh more. 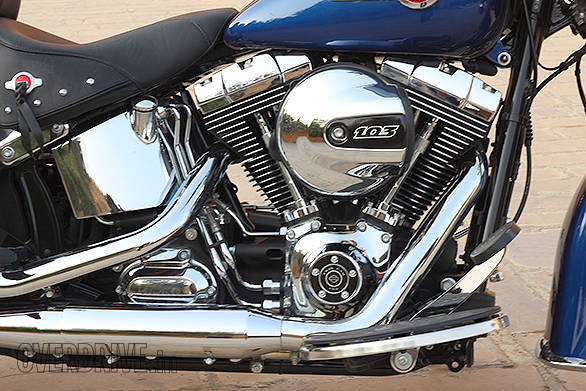 The Harley-Davidson Heritage Softail's TwinCam 103 uses a six-speed transmission. It's a sweet engine that's surprisingly smooth at speed and very flexible to ride

The question then is should Vikram Pahwa be upgrading to the new Heritage Softail. Or as I like to put it, should he stick with the old old-school phenom or get the new one. Vexing question, that.