As a country, we love to travel far and wide and mostly as a family. Which means a car has to offer space, practicality and comfort. In 2014, BMW introduced the 3 Series GT to cater to the needs of luxury car buyers who wanted exactly that. Two years down the line, the 3 GT gets a mild refresh and a 250PS petrol motor, aimed squarely at the enthusiasts. Let's find out what it delivers. 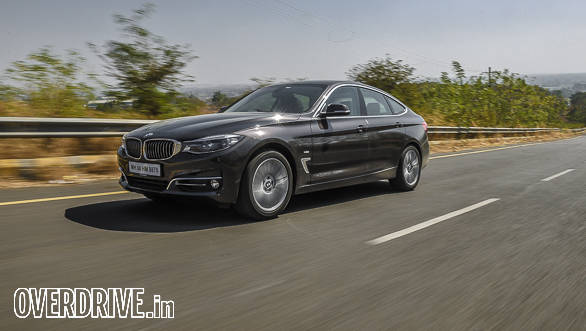 Refreshed for 2016, the new 3 Series GT gets subtle revisions on the outside as well as the inside. In typical BMW fashion, the design is all about understated elegance. The sharp crease lines on the bonnet and along the sides look great. Viewed head on, it does resemble the 3 Series sedan. However, the eagle eyed will spot the wider grille and LED headlamp cluster. 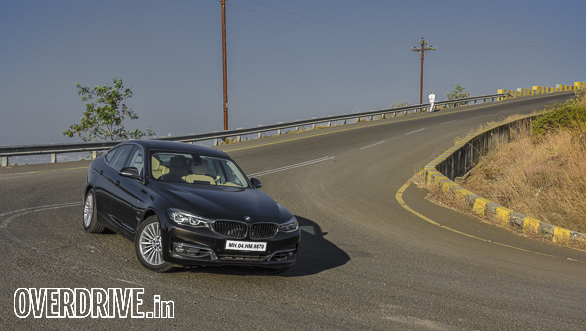 The petrol variant of the 3 Series GT is only available in the luxury line trim. Which means its kidney grille gets more slats (24 instead of 18 on the sport line), and there're generous dollops of chrome around the car. I particularly like the chrome around the window line that highlights the glass area and accentuates the side profile of the car. The frameless windows and the way the roofline merges with the stubby boot lend the car a distinct look. In fact, I did catch a few bystanders taking a second look at the car. I think it's because the design is still quite unique in India.

The side profile also has a few functional elements like the air breather located aft of the front wheels. It reduces wind turbulence and in turn improves stability at high speeds. The new L-shaped LED tail lights look stunning, especially in the dark. BMW has retained the active rear spoiler that deploys at speeds over 110kmph or at the touch of a button located behind the power window switches. That also makes it easier to clean the area under the spoiler. Overall, the car looks quite appealing as it steers away from the boring three-box design of a regular sedan. 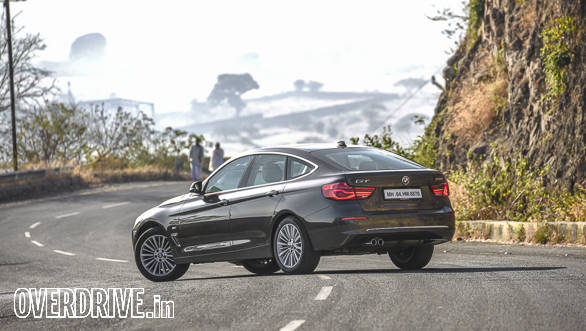 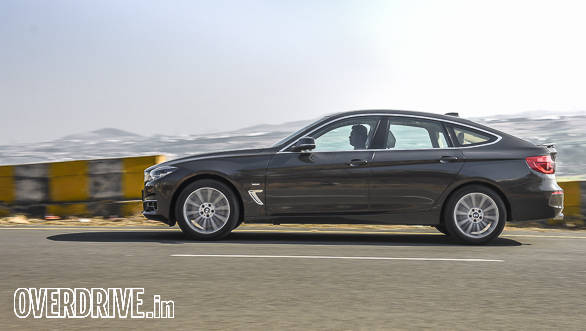 What that translates to is more head, leg and shoulder room than most cars around the same price bracket. The rear legroom, in fact, is in the league of the bigger 5 Series sedan, if not better than a 5 Series, and this takes care of one of the 3 Series' main issues - rear space. 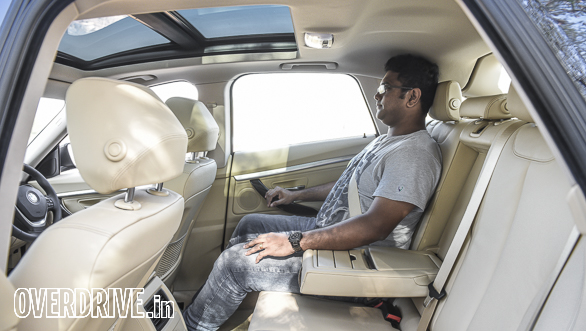 The interior layout is similar to the 3-sedan, and as is expected of a car of this class, the quality of materials used as well as fit and finish are top-notch. The ergonomics are spot on too, and you'll notice how everything is right where you expect it to be. I especially like the attention to detail in the cabin. The paddle shifters behind the steering wheel, for instance, are contoured to gel with your fingers like a jig-saw puzzle, unlike the flat-surfaced paddle shifters I've experienced in similarly priced cars. It makes for a connected feel while driving, and I'll get to that bit a little later. 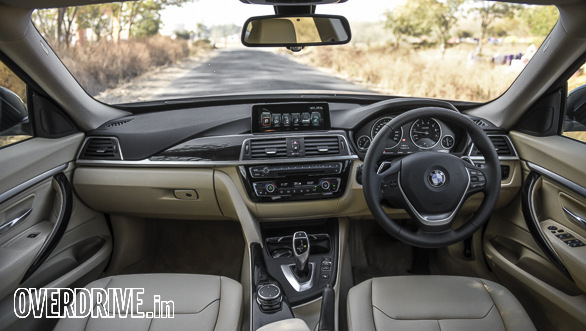 The BMW i-Drive system is quite easy to use, and the 22.3cm LCD screen above the centre console is probably the best in the segment. BMW has reworked the interface to make it pretty easy to toggle between menus. The screen's crisp resolution and the sharpness of fonts is what I'd come to expect, and I must say it is one of the best in-class or even from a class above.

The instrument panel, thankfully, retains the analogue speedo and tacho dials. In this day and age of digital dials, the sight of analogue dials at work has a charm of its own. 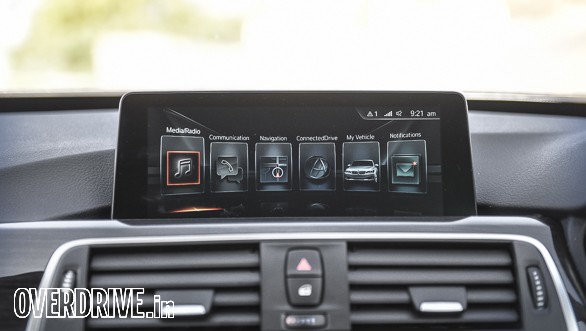 The interior of our test car was swathed in beige which added to the feeling of roominess in the car. BMW offers a wide range of upholstery options that'll quite frankly require another page to explain!

There're a nice-sounding 205W, 9-speaker hi-fi audio system, a navigation system and a 20GB hard drive that's useful to store your music. While the equipment levels in the 3GT are quite similar to the sedan, the latter gets cruise control as standard.

The 330i GT gets a 2-litre, 4-cylinder twin-scroll turbocharged petrol that develops 252PS at 5,200rpm and 350Nm between 1,450rpm and 4,800rpm. Mated to a brilliant 8-speed automatic transmission, with closely stacked ratios, you never find yourself out of the power band. It's a masterclass of an engine and it never feels out of breath. The motor is quite smooth and free revving with a nice exhaust note that only gets louder as you choose the sportier modes. 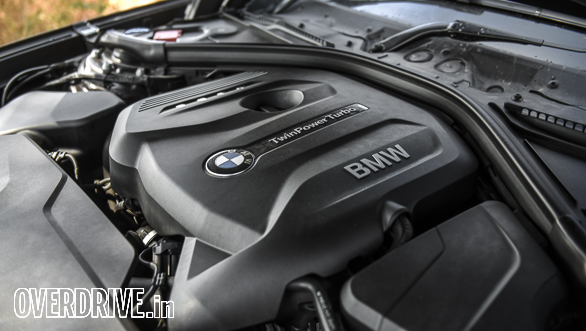 Eco Pro, as the name suggests, is purely to extract the best possible fuel efficiency. The throttle sensitivity is a little dulled, and the system manages the air conditioner to cut down fuel consumption. And this is no gimmick!

The rev needle barely gets past 2,000rpm as the transmission shifts up to higher gears rapidly. Be gentle on the throttle and the next cog is selected at 1,500rpm. All the while, the car gathers speed at a pace that feels quite linear.

There's also a pendulum-like needle that appears in this mode, right below the rev counter. It shifts between power when you're on the throttle and charge when you brake - the battery gets charged every time you brake. 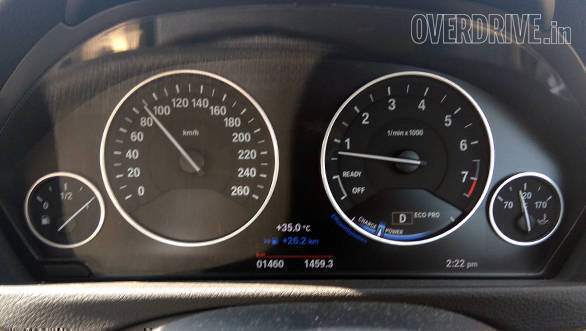 The needle returns to dead centre when you are coasting along with a drop in revs to 500rpm. There's also an auto stop-start feature that works quite effectively during city runabouts. The result of all that techno wizardry is an impressive 10.68kmpl in the city and 16.8kmpl on the highway.

Comfort mode offers a nice blend of performance and efficiency. The motor is a little more sensitive to throttle inputs than Eco Pro, while the steering feel remains light and nimble.

But since you are reading about a BMW, what will interest you is the Sport and Sport+ modes. Engaging the former stiffens up the steering and sharpens the throttle response to an extent where you have to be a little careful with throttle inputs as the car surges ahead with the slightest prod on the accelerator pedal. The shift points move to the 7,000rpm redline, and there's a lovely, raspy note to the exhaust that is quite addictive. Flooring the throttle at standstill will see the car race to 100kmph in 6.5 seconds, which is in the same ballpark of an entry-level sportscar.

In Sports+ the ESP is turned off and the car activates the Dynamic Traction Control (DTC). This allows for more wheel slip and lesser intervention from the Dynamic Stability Control (DSC) which essentially keeps you from overcooking a corner. The Sports + mode is best enjoyed on a racetrack or a winding road with not much traffic to deal with as it is easy to get carried away with the corner speeds the car is capable of.

With the F30 model series and thereafter, BMW tried to offer a balance between ride and handling instead of the bias towards the latter, as was the case with previous-generation models. In the same vein, the 3GT offers, what's in my books, the perfect ride and handling set-up.

Since this is a grand tourer, BMW has tuned the suspension to iron out most types of bumps and potholes you'd encounter on our roads. It's so good that I kept looking at the badge on the steering wheel that reminded me that I was at the wheel of a BMW and not a certain German competitor. High-speed stability is excellent and there are absolutely no vibrations through the steering wheel or pedals at unmentionable speeds. 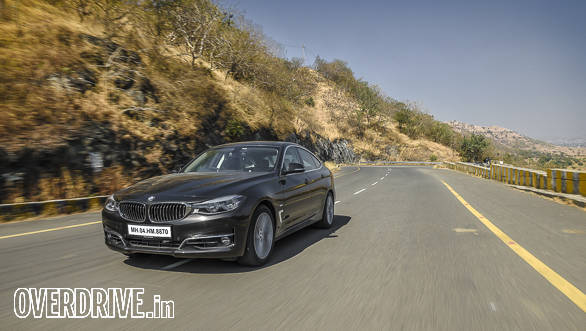 I also asked a colleague to ferry me around while I was seated at the back and I was amazed by the ride quality. This is easily one of the best chauffeur-driven cars (remember the acres of space I spoke about) in the country.

But the best time that one can have with this car is behind the wheel because the handling is truly astonishing. Driving the GT up and down my favourite winding road that leads up to Aamby Valley City in Lonavala was a revelation.

Firstly, the steering wheel is by far the best I've experienced in any luxury car. It's perfectly weighted and the level of feedback is exactly what you want. Driving around a corner, the front end has tremendous amounts of grip which makes turn-ins quite sharp yet predictive. Also, the rear-wheel drive set-up allows you to power out of the corners quite quickly as the rear tyres dig in to generate more grip.

The 50:50 weight distribution helps the car shine through a set of chicanes and never once did I feel that I'd lose control. For a car of its size and the level of comfort on offer, the handling and sense of connection the car offers is truly amazing. So much so that I had a wide grin on my face all the time I drove up and down the mountain road.

I did have a gripe with the brakes. They do offer tremendous bite that helps shed speeds quickly but I wish they had a bit more feel. All said, I got a harsh reminder of the impractical nature of run-flat tyres in India. I tried to, but couldn't avoid driving over a crater-sized pothole, bang in the middle of a flyover. The next thing I saw was a warning on the instrument panel, telling me that the front left tyre has suffered a puncture. The impact had slit the side wall of the tyre. Thankfully, BMW India supplies the car a spare tyre, albeit a space saver.

The BMW 3 Series Gran Turismo has multiple personalities. It's a comfortable and fuel-efficient daily driver. The interior space, ride quality and useable 525-litre boot space are befitting of the car's GT moniker. And for those who seek to indulge in some spirited driving, the 3 GT is happy to oblige. At Rs 59 lakh (on-road Mumbai), there isn't any car that comes close to what the 3 GT offers as a package. In most ways then, the car makes absolute sense for India. 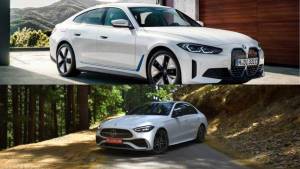