If there was a book on the most significant cars that defined the Indian automobile industry, the Mahindra Scorpio would definitely feature in it. More than a decade after launch, it still is one of the top-selling vehicles in the highly competitive SUV segment. In some states in India, it even outsells every other SUV. The Scorpio, until a few months ago, was even the current PM's vehicle of choice. It definitely is an iconic vehicle for Mahindra. Over the years, it has been updated quite often too but how much longer can it sustain in the market? Well, Mahindra didn't want to find out and so went ahead with the development of the next-gen Scorpio. The result is finally here, we have driven it too and it will be rolling out of dealerships by the time you read this. Does the new Scorpio, then, raise the bar? 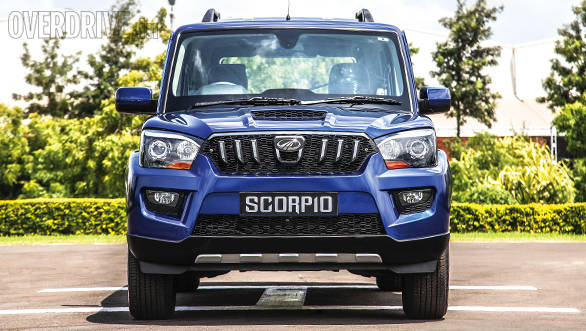 Before we drove the new Scorpio at Mahindra's facility and the birthplace of the SUV in Nashik, we met the team responsible for developing the new generation model. As the product presentation begun, they mentioned that the only parts retained from the previous Scorpio were the doors and the roof. Look at the end result here, though, and you will realise that apart from the all-new face, everything else looks very similar to the outgoing model. That's because every other exterior element has only been tweaked and is not necessarily an all-new design.

Let's start with the front end. The face is now more aggressive than the Scorpio we've been used to so far. Instead of trying to fit in the new family grille onto an older design (as seen in the older Scorpio), the designers have finally got an opportunity to start afresh. The grille, headlamps and bumper are all new. The hexagonal grille is unique and, instead of the usual separations in the form of slats, features smaller inserts finished in chrome. The headlamps go well with the grille, are edgy, and feature projector lighting and parking lamps in the form of LED eyebrows that add to the macho character. The hood is redesigned and the functional scoop that sits on it uses the same grille pattern. 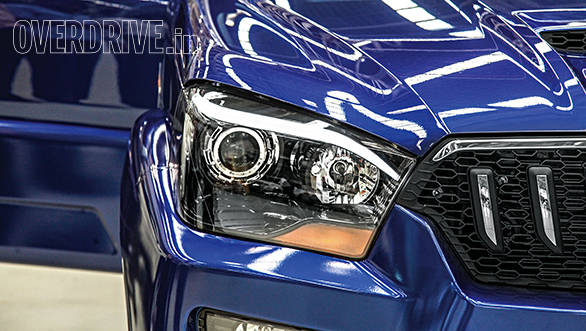 The sides? Well, apart from the front fender, everything else is exactly the same and is disappointing, after all, this vehicle is supposed to be the next-gen Scorpio. The headlamps now wrap around the fender that also features a mock vent like bezel, the side cladding is exactly the same, and only the front section has been redesigned since it is part of the new face. Larger 17-inch wheels (16-inch in the previous model) look good but are more car like than SUV. The wheels however fill up the arches well. Move to the rear and you know it is a Scorpio even though the design is a lot busier than before. A black applique runs across the upper part of the tailgate. It looks better on a darker shade like the blue Scorpio you see here, but the silver number plate garnish is boxy and loud. The base model is in fact easier on the eyes since it doesn't feature any contrasting garnish. The window is now smaller and the visible area even less. But it doesn't affect visibility since the outgoing model's rear window was unnecessarily large. The window shape is unique and complex, even the rear defogger grids aren't straight lines but angular. The clear lens tail lamps are new and feature bright LED lighting but the chrome insides look aftermarket especially during the day. However, the vertical pillar-mounted reflectors have now been ditched for non-reflective black inserts.

The bumper however is exactly the same as before. Overall, the exterior is still very much like the current Scorpio's except for the more aggressive face. 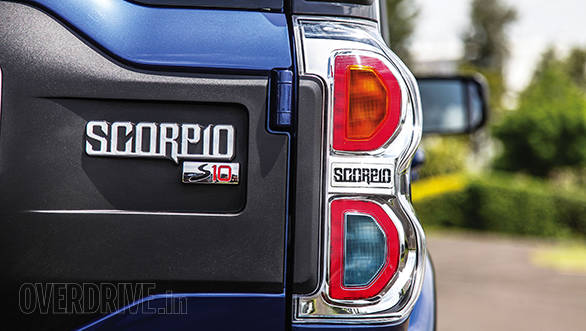 The tail lamps also have been revised

It's a similar story when you step inside. The dashboard, door-pads and steering wheel are all new but the rest of the interior only gets tweaks. The black/light grey dual-tone dash is no more rounded but edgy and is better finished too. The seats meanwhile feature blue-grey upholstery. The centre console even houses a touchscreen infotainment system (in the top variants) that offers features similar to the more premium XUV500. The newinstrument cluster even goes well with the interior theme, the futuristic designstill uses analogue meters but features a digital-centre screen that also displays a gear indicator. The steering wheel and mounted controls have been borrowed from the XUV500. The light blue backlit theme is soothing and the design overall is smart and pleasing. Despite a large cabin, the Scorpio still offers very little storage points, the gear lever console, for instance, could have offered a lot more cubbyholes, and there are still no bottle holders in the door pads. The power window buttons, that were earlier placed near the gear lever, have finally moved to the doors. 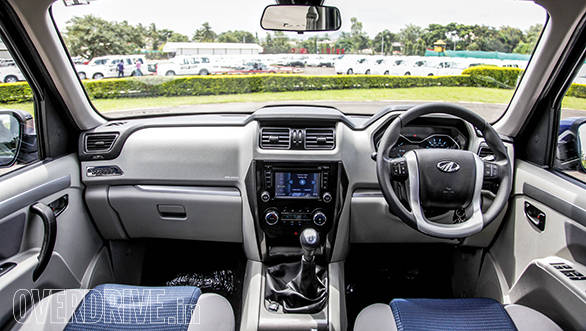 The engines are similar to the outgoing model's and receive no upgrades too. The Scorpio will be offered in six variants, namely  S2, S4, S6, S6+, S8 and yes you guessed it, S10. The S2 variant features the m2DICR 2.5-litre engine while the rest are powered by the 2.2-litre mHawk diesel. The transmission mated to both engines however is the new-generation 5-speed manual from the Xylo mHawk. 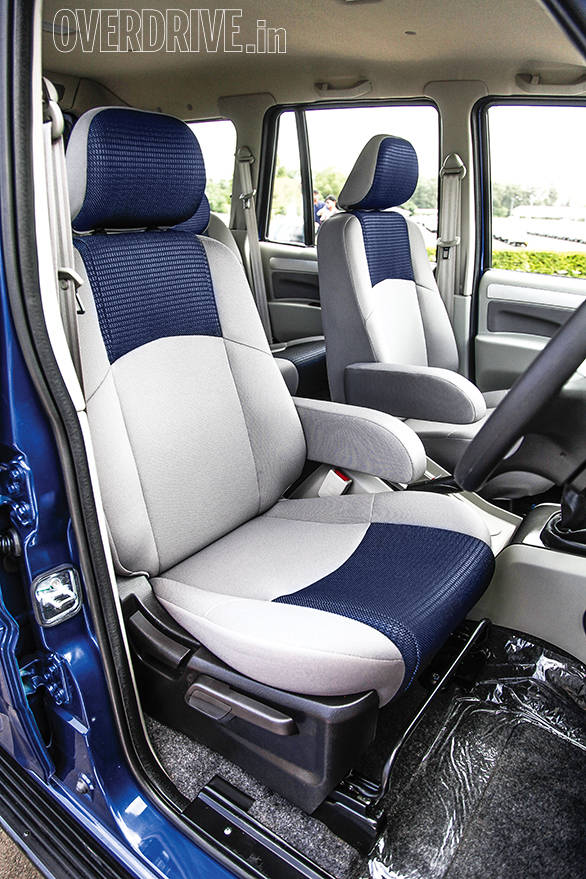 The seats also have matching upholstery

The gearshifts are now smoother and take lesser effort. The automatic variant will feature the same 6-speed torque convertor. The 4WD model features a new shift on fly system that allows toggling between 2WD and 4WD mode without having to bring the vehicle to a complete halt. We didn't get to drive the 4WD Scorpio but we did drive the top-end 2WD model, the proven mHawk engine is still very refined and hence made sense to be retained. 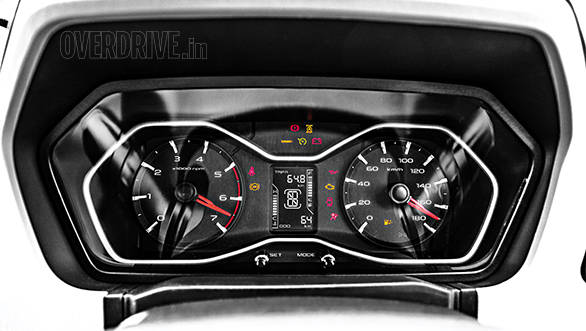 Turbo lag is evident but once past the 2,000rpm mark, power delivery is strong and linear. The engine produces a healthy 120PS at 4,000rpm while max torque is an impressive 280Nm produced between 1,800rpm and 2,800rpm. The body may be similar but the most important change that makes this Scorpio a true next-generation model is the all-new chassis. The new modular ladder construction uses a hydroforming manufacturing technique. This process has been used in aerospace for decades but has made it to the auto industry only recently. Hydroforming helps reduce weight, and most importantly, increases strength and stiffness. Compared to the old ladder chassis, the new frame is visibly thicker but is in fact two kilograms lighter and almost 100 per cent stiffer.

Since it is also modular, this ladder will be the platform for all future body-on-frame Mahindra vehicles. What about the Scorpio pick-up? It will continue to use the older generation chassis as of now and according to Mahindra, there are no plans of an upgraded model anytime soon. The suspension uses a similar setup as before (double wishbone front and a multilink rear) but it is a newer unit and features polyurethane bushes instead of rubber. The former lasts longer since it is less vulnerable to abrasion and retains its original shape. The track has beenincreased on both axles too, reducing the turning radius from 5.6m to an impressive 5.4m. The steering system also features a new collapsible system. 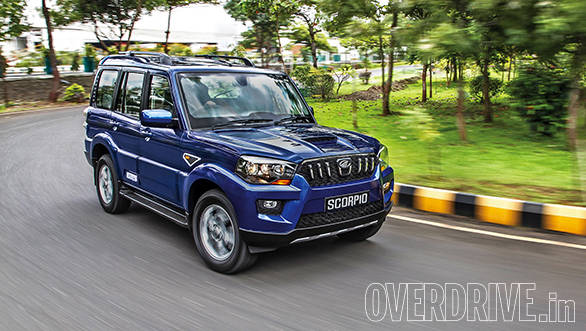 The various changes to the underpinnings improve the Scorpio's ride and handling by a margin. Gliding over potholes and broken surfaces is even more effortless now, while body roll is much more controlled. The wider track has helped too, the chassis feels a lot more planted at higher speeds and the steering feels quicker. The driving position is still very old-school and a more committed position could have elevated the driving experience even further. 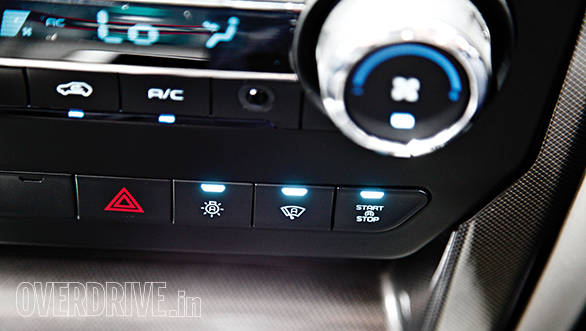 Automatic climate control is offered on the new Scorpio

The outgoing Scorpio did feature a long list of comfort features such as rain sensing wipers, auto lights, tyre pressure monitor, parking sensor, start-stop technology and more. The new Scorpio carries forward these features as well. Safety features like dual-airbags and ABS will continue to be offered, a new Panic Brake Indication has also been included. All the additions and modifications will add to the price but we still think Mahindra will price it competitively. The number of variants has increased too, allowing buyers to choose the model that suits them best.

The Scorpio is one of the most successful Mahindra models ever and has the potential to do well as it has just received the biggest upgrade since it was launched back in 2002. Now if only someone could convince the boffins at Mahindra to offer an all-new body in the next update. 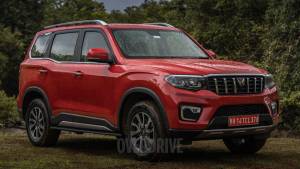 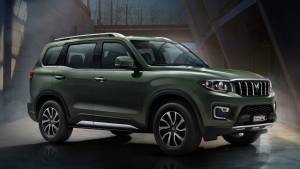