The Scrambler from Ducati is an all new, far more evolved vision of the original single cylinder machine that debuted in USA in 1962. Like the original, the Scrambler is designed to be a simple but fun machine that is accessible to new riders and won't break the bank. While the old bike was designed to tackle dirt tracks and fire trails the new one is more of a lifestyle machine that still claims to be fairly competent off-road. 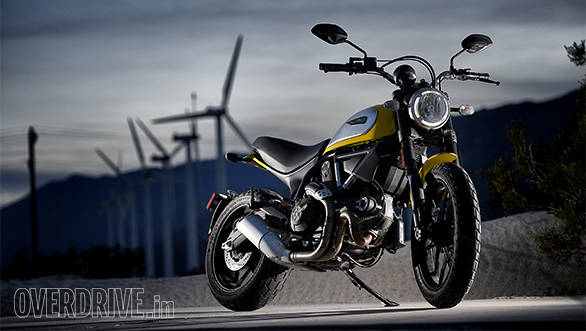 The lithe Scrambler is a good mix of retro and modern

In fact Ducati introduces the Scrambler as a new sub brand that focuses more on the lifestyle segment and less on traditional Ducati values of extreme focus on performance. 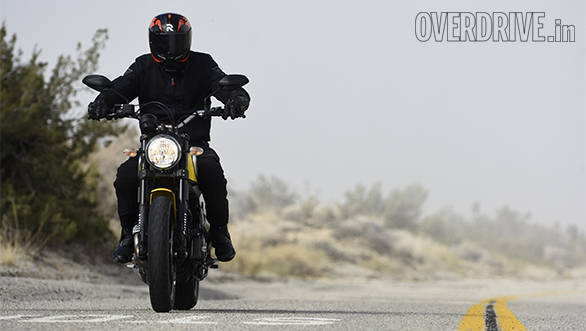 Ducati say they have built the Scrambler as if it never went off sale and simply evolved through the years. That theoretical evolution sees the addition of another cylinder, with the 803cc L-twin borrowed from the old Monster 796 (795 in Asian markets) and the addition of basic safety features like ABS. But the Scrambler also stays close to its roots. There's no complex electronic throttle control or traction control. Braking is handled by a single front disc and the clutch is a simple cable operated unit. But there's also a fair bit of technology, like the LED DRLs, cool Audi style diffused LED lighting for the tail lamp and the aforementioned ABS. The styling is quite likeable; compact and narrow which makes it inviting for new riders. Every angle on the bike has a distinctive feature - the modern looking LED ringed headlamp up front, the lovely header pipes that twist their way around the side to the exhaust and that chunky 180 section tyre at the back. The low 790mm seat height meant even the shortest rider on our ride could comfortably put their feet down. Even so, Ducati will sell a lower or higher seat if you need it.

Are there any variants?

Yes, four in total and there's a vast range of customisation options to further personalise your ride. However they are all essentially the same bike under the skin. The idea is to offer customers four different identities upon which they can further tweak and customise the look to their taste. The base motorcycle is the Icon which we rode. This bike gets standard alloy wheels and that fenderless rear end with a separate swing arm mounted number plate holder. The Classic builds upon the Icon with the addition of spoked aluminum wheels, and proper front and rear aluminium fenders. It also gets a lovely brown quilted design seat and a fuel tank with a black stripe. 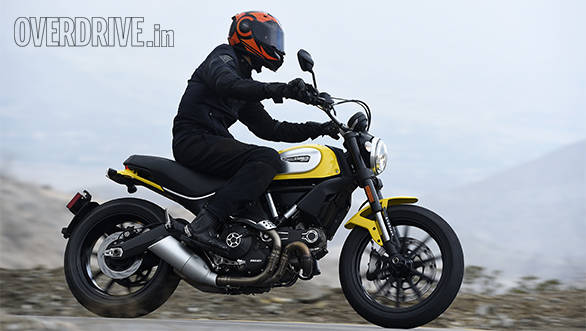 The Urban Enduro is a more rugged looking version with a bash guard, spoke wheels and a headlamp grille. The seat gets a different, ribbed design while the front end has a raised dirt aspiring mud guard as well as a different handlebar with a cross brace. If you want a more sporty iteration there's the Full Throttle that gets a lower handle bar, a different flat track-esque seat and sportier tail piece and front mudguard. The Full Throttle also gets a compact Termignoni slip-on silencer that doesn't add any power but supposedly sounds much throatier. All the variants get different tank panels and each has its own logo.

And what's under the skin?

Ducati chose to stick with the iconic 803cc L-twin from the old Monster that comes with a Desmodromic valve system for its two-valve head. While this engine made 87PS in the Monster the focus is more on mid range torque and the motor has been retuned to make 75PS and 68Nm. Like before, the engine feels grumpy at anything below 2,000rpm but pulls strongly above 4,000rpm. The real surge arrives a little short of 6,000rpm before running into the limiter just above 8k rpm. The engine note is muted but has a distinctive roar of a twin at high revs. It's also quite smooth with almost no vibrations to speak off but a constant thrum through the seat that reminds of the engine configuration. Interestingly, the low speed throttle is quite quick and on-off feeling. It gives the Scrambler a sense of sharpness that slightly contradicts what is otherwise a very friendly bike to new riders. 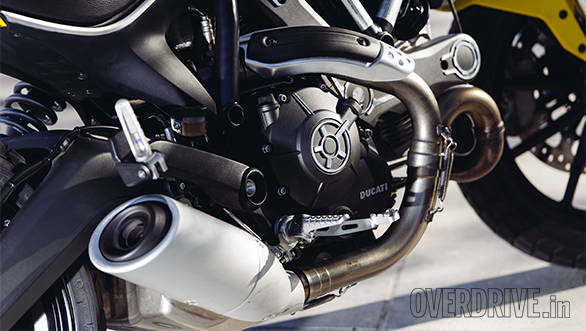 Braking is progressive and strong without feeling intimidating. The lone front disc spans the same 330mm as a Panigale but is actually slightly thicker. It gets a four piston floating Brembo caliper that does a great job. The ABS system is non intrusive and doesn't cause much pulsation in the lever.

The 6-speed gearbox is light and precise for the most part but I did find it was reluctant to shift from second to third under full acceleration. And I wasn't alone with a few others also mentioning gearbox inconsistencies. Hopefully Ducati should have it ironed out by the time the bike goes on sale in March next year overseas.

But does it handle?

Surprisingly well. The riding position is quite reminiscent of a KTM Duke - folded legs (the pegs are set high but not very far back) while the rider sits bolt upright. Drop the Scrambler into a corner and she responds with a good combination of quick but stable steering. The motorcycle feels long but eager and the purpose built blocky Pirelli MT 60 RS tyres offer lots of grip. The suspension is supple but with a fair amount of firmness that could be felt on the small ruts on the road we were on, in the mountains around Palm Springs. The riding position, generous ground clearance and tough tyres mean you can comfortably take the Scrambler off-road. It won't iron out the bumps completely but it won't pitch you off the seat either. Ducati also say they will be working on the suspension for the India spec motorcycle so we expect slightly improved bump absorption. 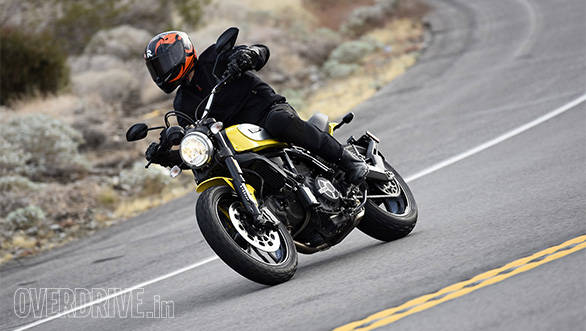 The international media almost unanimously sees the Scrambler as a motorcycle aimed at hipsters, what with its retro modern style, easy nature and comprehensive styling options. But the Scrambler is quite a different motorcycle in the Indian context. We expect the base Icon to cost around Rs 7 to 7.5 lakh and about 1.5 lakh more for the other three variants when it comes here mid next year. That makes it quite affordable for a Ducati, but the more exciting part is that this motorcycle, by nature, is perfectly suited to our road conditions. It could be one of the smartest and most useable motorcycles you can buy from the Italian manufacturer when they resume business in India next year.

More from OVERDRIVE on the 2015 Ducati Scrambler 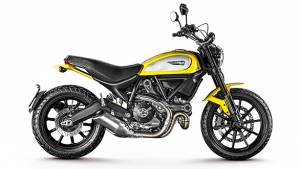