The Let's is Suzuki's first all new scooter since they launched the Access in 2007. Sure the Swish came after that but it was essentially a snazzier looking Access in a lighter plastic body. The Let's on the other hand comes with an all new engine  Suzuki's first 110cc. On paper it not only offers the same peppy power of its larger siblings but also promises to be more efficient. Seems like a win-win. 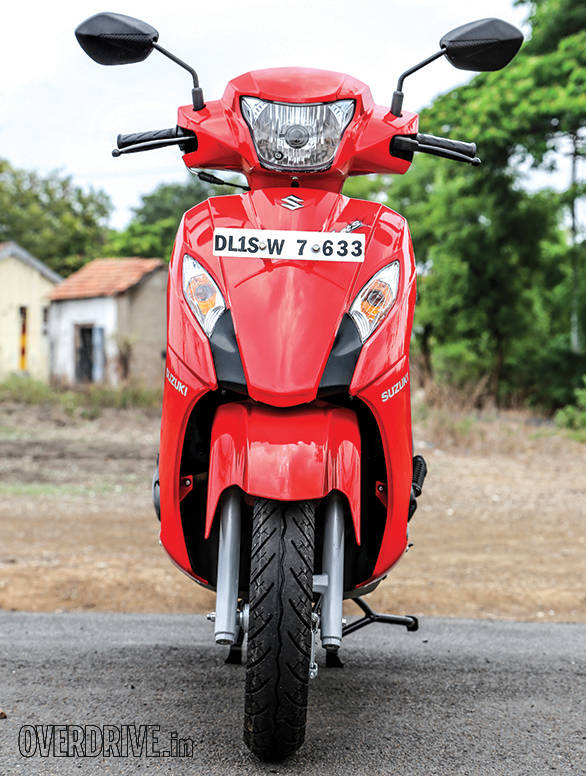 The Let's is a compact but stylish looking scooter that carries forward the swoopy design theme that works rather well for the Swish. It stands out from its bigger brother through a differently shaped headlamp, and fresh body panels all around. The overall design is considerably sharper, especially at the rear end. It's a good looking scooter, in this bright shade of red or even in blue. The subtle use of graphics only highlights the design  Suzuki didn't have to slather it with stickers to make it look appealing. Perhaps the only sore point is the simple and dated instrument duster that simply doesn't gel with the rest of the design. The sheer compactness of the Let's comes across when you sit on it. This is a scooter aimed at shorter folk and that's telling in the way that the low set handle bars will hit a tall rider's knees. 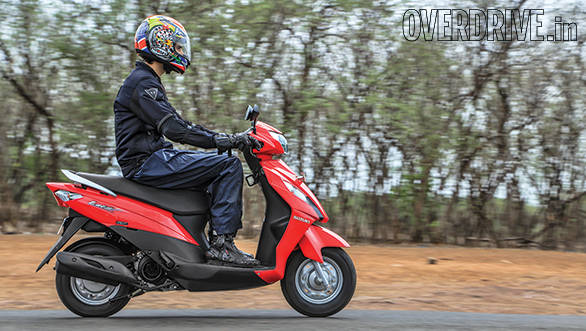 On the plus side there's enough leg room and the long seat is accommodating. Bigger riders can easily and comfortably ride the Let's around town but it does feel rather tiny. Suzuki has got the seat shape and density just right - not too hard or too soft which is great for longer rides. Fit and finish is good with simple but tactile Honda like switchgear. The boot is generous enough and should hold a regular Indian full face helmet although, like on almost all other scooters, our larger lids don't fit inside. The front apron gets a hook for suspending your bags and Suzuki will also sell you an optional luggage box. Things like the number plate, pillion footpegs and side standard come as standard unlike with the Activa where you have to pay more for what are rather basic and necessary features. 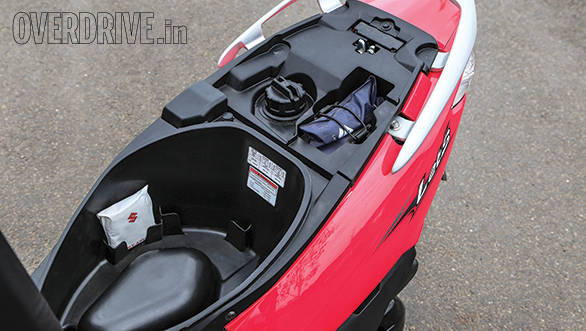 The boot is good enough for a regular size helmet

The Let's engine displaces 112cc which positions it in one of the biggest selling segments in today's two wheeler market. Suzuki has done a commendable job of squeezing slightly more power from this engine than its bigger sibling - 8.8PS over 8.7PS albeit 500rpm higher in the rev range. Naturally, the bigger engine in the Swish has the advantage of producing 0.8Nm higher torque than the Let's. The Let's' 9Nm of torque also peaks 1500rpm higher than the Swish. 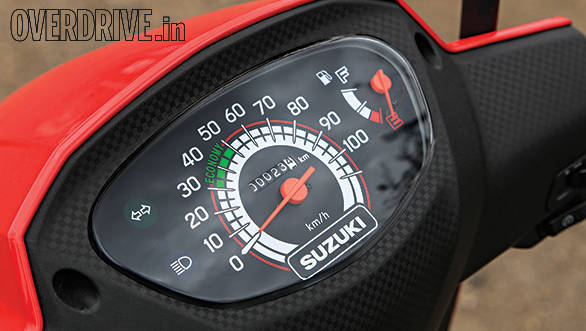 Initial impressions are very familiar. If you've ridden a Swish before this you won't be able to tell much of a difference. The engine has the same smooth character and produces a very similar sound as well. But after a day of riding one difference stood out  the Let's doesn't seem to have the same midrange punch. Fans of Suzuki's 125cc scooters love the peppy top end and their ability to hit an indicated 90kmph. The Let's feels like it won't have a much slower top speed than the Access or Swish but it does seem to labour a bit from 35kmph to 50kmph. Once you cross that and the revs get high enough, the scooter starts to pull with surprising earnest. It's something you will only notice if you ride the Let's back to back with its larger siblings and it should still comfortably be one of the quickest scoots in the 110cc category. One of the biggest advantages of the smaller engine is that the claimed mileage figure is now 63kmpl which is the highest any scooter manufacturer is claiming today. We haven't had the chance to ratify those figures yet but you can look forward to that in a forthcoming full road test. The Let's runs on a similar platform to the Swish and shares the same wheelbase. We particularly enjoyed the Swish's flickable nature thanks to its telescopic front fork set up. The Let's feels as agile if not more so thanks to its low 98kg kerb weight which is 12kg less than the Swish. It rides with a similar taut feel but doesn't crash through potholes. It sits 20mm lower and has a 15mm lower seat which makes it friendlier for teens or the ladies. The Let's carries forward the same 120mm drum brakes up front and rear and they provide the same adequate stopping power. The rear isn't very powerful and we found that the wheel won't lock even if the lever is pulled all the way to the bar. Use the front and rear in conjunction and the brakes get the job done without complaint. You won't feel insecure but they don't have the same confident performance that Honda's combined braking systems offer. The Let's has exactly what our market is looking for - good looks, peppy performance and the promise of efficiency. It's also quite well priced at Rs 52,000 on road Mumbai, which is on par with the Activa i and Rs 3,000 less than the Activa as well as its elder sibling, the Swish. So for a few thousands less, you get a more compact package with similar performance but better efficiency. The Let's is already doing very good things for Suzuki in terms of sales and as a product it makes strong argument against its rivals from Honda, Yamaha and TVS.