When two very similar heavyweights take on each other, the result is quite interesting. In this case, it's the Mercedes-Benz ML 63 AMG and the Porsche Cayenne Turbo. Over the past decade, big engines have been making their way into SUVs and the two machines you see here are probably one of the best examples in the world today. Both these vehicles boast a V8 bi-turbo heart, produce almost the same power and are even priced closely. So the curious bunch that we are, we decided to pitch these two super quick German SUVs against each other. 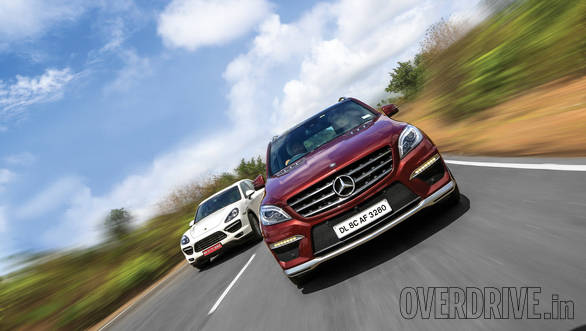 Driving out of town, the Cayenne Turbo gets more attention despite looking more like it's diesel sibling, in fact other than the larger trapezoidal grille, optional 20-inch wheels and the quad-exhausts, one really can't differentiate the Turbo from the other Cayennes. I personally prefer a sleeker SUV and the Porsche defines it. It's already a dynamic design and doesn't really need any more added kit. The ML 63 AMG meanwhile does try and stand out with completely reworked bumpers and some contrasting elements like the chrome lip and quad-exhausts, but the AMG still gets lost among the many ML 250/350 diesels seen on the roads today. The Merc runs on standard 20-inch wheels though, these rims along with the low profile tyres do add a lot of character but just like in the Cayenne, one wouldn't want to go off- roading with such footwear. 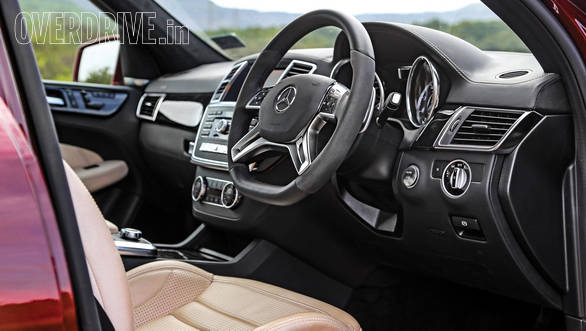 Inside, the Porsche interior is very well built and looks unique, there is an overdose of buttons extending from the centre console all the way to the gear lever, but then all of them are thoughtfully placed. The AMG cabin in comparison is less cluttered and uses high quality materials but it doesn't feel as special. The latter's seats are more comfort oriented though and better suited for long distance driving. Both interiors use quite a bit of Alcantara especially to wrap the pillars and headliners and if needed one can customise the insides in several ways. 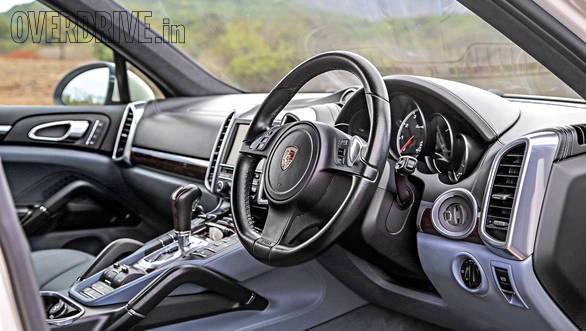 But what really makes these SUVs ridiculously expensive? Well apart from the luxury bits and drivetrain, it's the high performance motor. The twin turbo petrol V8s offer sportscar like power, the Porsche's 4.8-litre V8 produces 500PS and 700Nm while the Mercedes AMG 5.5-litre V8, though detuned, dishes out slightly more power and identical torque. But do some quick calculations and you will realise the power to weight ratio of the Cayenne is actually slightly higher since it's lighter. So on paper, it's a close fight but what really matters is the way all of this power is put down on road. 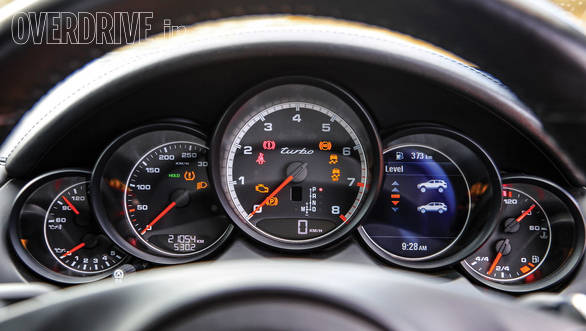 The Cayenne gets Porsche's classic 5 pod dials that look fantastic 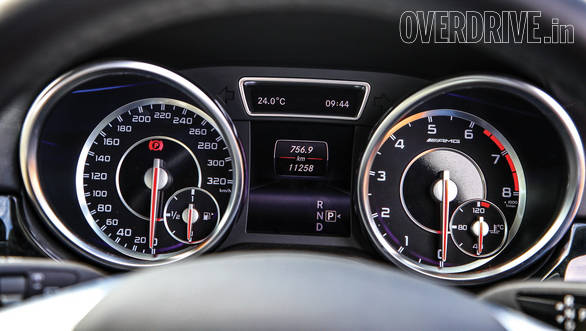 The ML's dials while easy to read, don't display as much information as the Porsche's

Crank the Porsche using the beautifully carved key and the 4.8 V8 comes to life, the note from the motor is surprisingly better sounding than many other Porsches available in the country today. But the stock exhaust isn't as loud as the AMG's and is the reason this very Cayenne also features an aftermarket Akrapovic exhaust that is loud and at the same time very pleasing to the ears, thanks to a more bassy note. The ML 63 however roars to life in typical AMG fashion and doesn't need an exhaust upgrade. On the move, especially in Sport mode, the exhausts are clearly audible and sound even better when they begin to crackle during upshifts and while rev-matching, this elevates the experience even further. Both the V8s are mated to semi-automatic transmissions, the seven-speed unit in the Merc is slower to upshift compared to the eight-speed transmission in the Porsche, however during downshifts it's the other way around. The Cayenne features standard push/pull paddle shifters on each side of the steering and it takes time getting used to. If you are buying one, we'd suggest you get the optional standard paddle shifters. The AMG gets them standard. 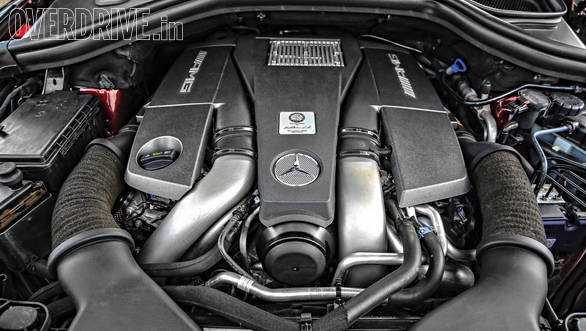 The twin turbo 5.5-litre AMG V8 is a masterpiece and makes a fantastic noise 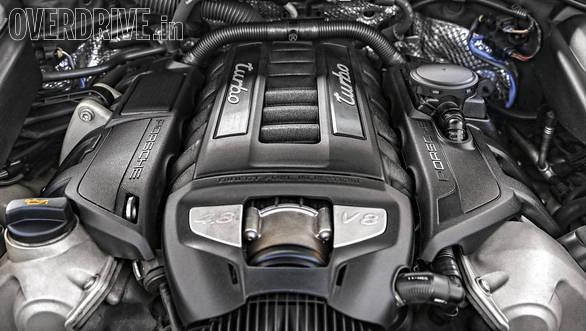 The Porsche's smaller twin turbo 4.8-litre V8 makes less power than the AMG but matches it on torque. The 8-speed gearbox is much quicker and more enjoyable to use

Get onto open and straight asphalt, floor the throttle and the SUVs will be neck to neck all the way. Even a drag run would make it tough to decide between the two since in our tests, both the ML63 and Cayenne Turbo explode to 100kmph in 5.2 seconds and cross the quarter mile marker in little more than 13 seconds. This is impressive for any road vehicle that weighs above 2 tonne. Hold on longer and the force fed V8s help the SUVs get past 200kmph effortlessly and eventually reach an electronically limited 250kmph. Straight line stability can't get better and the massive ventilated discs with six-piston calipers can bring these heavyweights to a halt in quick time too. And if fuel efficiency is important to you, the Porsche is slightly more economical returning 5.1kmpl overall compared to the Mercedes that returns 5kmpl.

What then separates the two? Well, it's the connect between driver and machine. The ML 63 is easily one of the quickest ways to ferry five adults and their luggage in comfort but the Cayenne Turbo does the same and and can even shoot around corners and set a few lap records on a race track. The chassis doesn't feel SUV like at any time, body control is just perfect and the steering is sharp and alive at all times. It is physics defying, considering the sheer size of the vehicle and a true delight to drive enthusiastically. Clearly, the more advanced electronic aids and the focused chassis coming in play here. If one wasn't sitting up high, it would feel like being in a Porsche sportscar. The Merc in comparison displays a lot more roll, the steering is speed sensitive but is uninspiring and still not as direct. In fact the overall driving experience isn't very different from the regular ML-Class, it's happier in a straight line than around a twisty road. The Porsche and Mercedes also offer standard adjustable air suspension, so you can increase the ride height in various stages and venture into roads no sportscar can ever dream of and still have a blast, the same system even helps lower the car automatically at high speeds too for optimum grip. 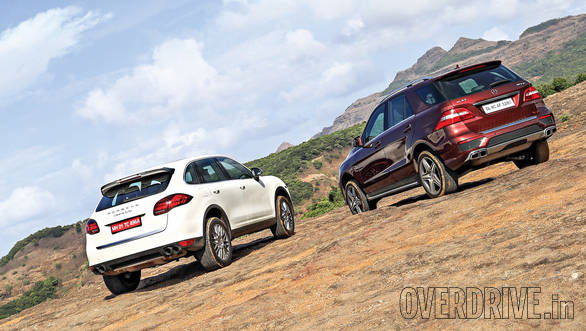 Though both are rather familiar shapes on the road today, the Porsche still commands a more premium and sporting image

After spending a day with these power SUVs, I feel they are great all rounders considering they can ferry five adults and their luggage in luxury and still offer sportscar like performance. The ML 63 AMG is seriously quick, it keeps up with one of the most powerful Porsches ever, this is definitely quite a feat but it has lazy handling and fails to bridge that connect with the driver. The big V8 motor and the addictive exhaust note is the only talking point. At Rs 1.54 crore, ex-Mumbai, it is priced lower than the Cayenne Turbo but for a few lakhs more, the Porsche is still the better choice. After all, if you are out buying a performance SUV, wouldn't you rather get one that combines hardcore performance, dynamics and true sportscar pedigree? 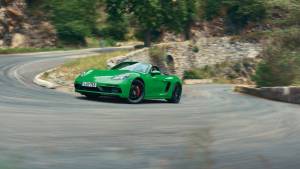 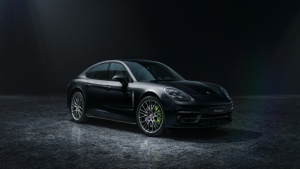