It's the end of the month, I've just paid off my installments, house rent and various bills, not to forget spent a bomb in doing up my car. It's one of those months when the balance sheet of my bank account shows a higher amount in debit than on credit. I have just a few 100 buck notes left, but I'm still super excited and grateful to god, that too on a Monday. Why? Well the cars I'm looking at together produce close to 1200PS. That's not it; both cars are mine for two whole days and are brimmed with fuel. So thank you god as I'm going to arbitrate this epic battle, the battle between BMW's M5 and the Mercedes-Benz's E63 AMG. 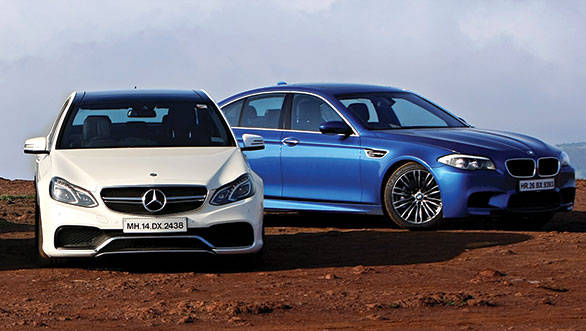 Both the E63 AMG and the M5 look like typical luxury sedans, that's because both of them are based on two large four-door sedans that have been tweaked to look sporty. The 5 Series' character is more dynamic than the E-Class in stock form, but that doesn't mean the M5 has an advantage here. The folks at AMG have added more muscle to the E this time around, and this transforms the elegant car into a proper monster in the form of the E63. The recent E facelift has been carried forward to the AMG model too, so the car gets those arresting new LED headlamps.

The highlight, however, is the all-new front bumper that houses two large air dams that give the car a menacing look, while the front skirt area receives carbon detailing. The fender is widened to accommodate the increased track and neatly incorporates the V8 biturbo badging on the sides. The side skirts also get carbon detailing, however the only downer to the sides are the 18-inch wheels, they look very simple and a tad small for the car. The upper half of the rear end is like any other E-Class but look below and one is greeted by rectangular quad exhausts that look like they belong to a supercar. The M5 on the other hand looks plainer still when viewed from the sides but does get larger 19-inch wheels. The front bumper also gets air dams but they aren't as loud as the AMG's. The fenders are wide and get signature M air vents reminding us that this too is a hyper saloon, while the rear end receives a chunky bumper that accommodates circular quad exhausts. Both cars are good lookers, so your preferences may vary. 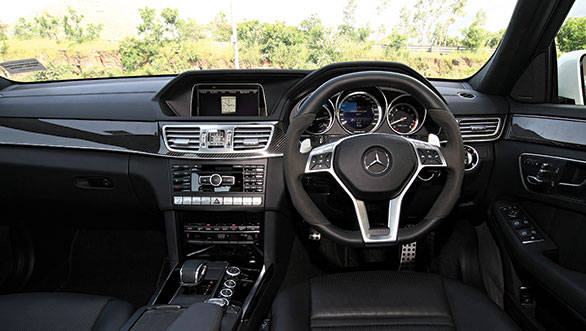 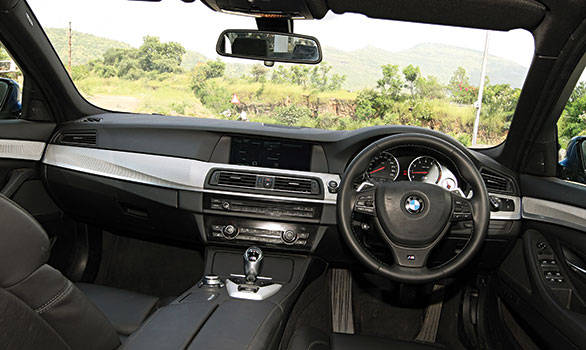 But step inside, and it is the E63 AMG that clearly looks sportier and better detailed. The AMG gets a flat bottom steering wheel that not only looks great but lovely to grip as well, while the M5 makes do with a regular wheel that only gets M colour stitching to differentiate it from the standard BMWs. The aluminium paddle shifters in the E63 look like they've been specially crafted while the seats follow a race car theme and even offer better support. And to add some luxury, there is a massage function for the front passengers too. To sum it up, attention to detail and comfort is the prime focus in the E63. The M's interior is like any other regular BMW and simply isn't special enough when compared to a standard 5 Series. This is a letdown especially since the car costs almost three times more than the base 5. 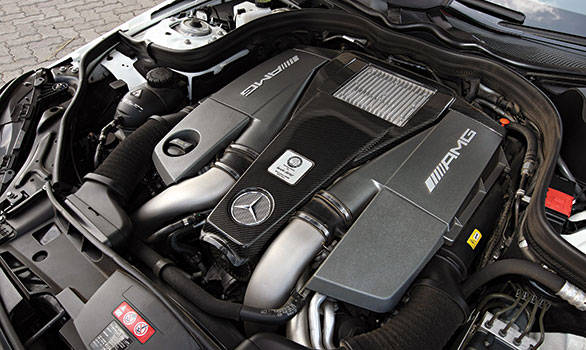 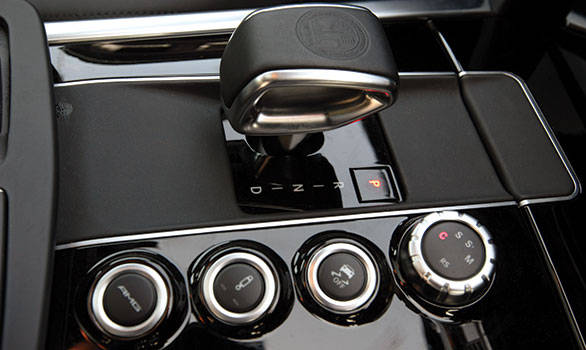 The gear selector now moves to its conventional position 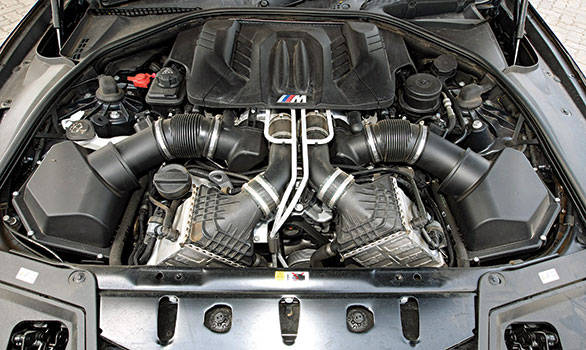 4.4-litre V8 is smaller than the AMG's but puts out similar max power 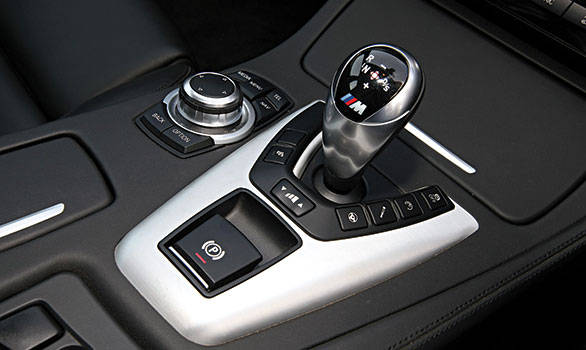 Gear selector is unique and moves horizontally while changing gears

What about those big V8s inside then? The updated E63 now gets forced induction power just like the M5 in the form of the new 5.5-litre V8. Stringent emission norms and hunt for better fuel efficiency has resulted in the downsizing of engines, but this isn't necessarily a downer when it comes to performance thanks to the twin-turbos. Just like the M5, the E63 AMG also features two turbochargers and as a result betters its predecessor's power output. Putting out close to 560PS , 557PS to be exact, and 720Nm of torque, power has gone up considerably. However, the M5 despite using a smaller 4.4-litre V8 puts out 3 PS more with peak torque being lower at 680Nm. Out in the real world though, the M's engine is more rev happy, while the E63 motor feels more torquey. But it still surges ahead in an aggressive manner and thanks to the signature AMG exhaust note, the feeling is only intensified. The purr from the exhaust is cracking and loud, so much that it can be heard from miles away, and it's music to the ears even when seated inside the cabin. You will always be tempted to rev match just to hear that exhaust bark and repeat the process over and over again.

And it is quicker than the M5 too, the claimed figure is 0.1 seconds quicker to 100kmph. (Yes it's only that much quicker but it's still the quicker car!) In our test the AMG went on to cross 100kmph in just 4.7 seconds (the quickest four-door we've tested), while the M5 was only slightly slower at 4.8 seconds, the gap again being just 0.1 seconds. The AMG features an in-house 7-speed dual clutch unit that offers quick shifts (more responsive during downshifts) and makes full use of the ample torque the engine has to offer, it's a super combination. The BMW also uses a 7-speed dual clutch transmission, the shifts are as quick and if needed can be violent when the gear shifts are adjusted by just toggling a button. The option to adjust gear shifts does aid in acceleration, especially in a drag. But at the end of the quarter mile marker, it's the E63 AMG that still sneaks ahead by a very small margin. Remember, the E63 has a better power to weight ratio since its 100 kilos lighter than the M5 in spite of BMW using aluminium for the doors, fenders and hood. We didn't bother testing the cars for fuel efficiency, but at the end of our drive that involved high speed highway runs, crawling in town and enthusiastic ghat driving, both cars returned close to 5kmpl.

When we last drove the M5, we said it rides as well as a standard 5 in Comfort mode, well it's the same with the E63 too. The car does get adjustable damping and in Comfort mode one can be fooled into believing that you're driving or being chauffeur driven in a standard E-Class. This despite using low profile tyres. The M5 runs on 19-inch wheels but uses a slightly higher profile and as a result also offers an impressive ride, but amazingly the Merc is slightly better at it. Driving through the winding ghats leading to Mahabaleshwar, the AMG felt more like driving a car smaller in size than the M5, turn-in is quicker, it's agile but the steering is light even in the most extreme setup.

It's the same feeling in town too; the car is just easier to drive and live with. This gives it an edge to drive in Indian conditions but that also means it is less involving. The M5 on the other hand isn't a class leader when it comes to attacking sharp corners but makes up for it with a lovely steering that is well weighted and very impressive for an electric unit. The ace up the M5's sleeve however is the option to customise the driving experience. While the E63 features five defined driving modes, the M5 offers four separate modes for the steering, engine and suspension. But this means one needs to play around with dozens of combinations to find one that suits the situation the most. 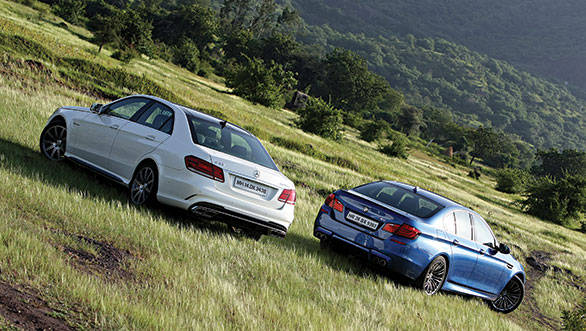 But then, who buys these cars? A wealthy businessman? Nahhe would be happier in a regular 5 or an E. What about a rich enthusiast? Well, he would just add some more moolah and go in for a Porsche or an XKR-S instead. The ideal buyer of such high performance saloons is one who wants the practicality of a four door luxury car with sportscar like performance. He is one who wants a car that is not just easy to live with but can also reach triple digit speeds in no time. And one who values comfort and, at the same time, loves a car with an exhaust note that puts some race cars to shame. The BMW M5 does manage to tick almost all the right boxes. But so does the E63 AMG and it is also just that little bit better. Word on the street is that an updated M5 is around the corner. This battle's done but the war ain't over. 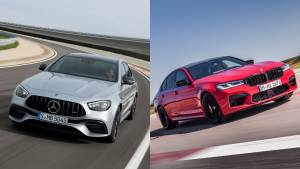 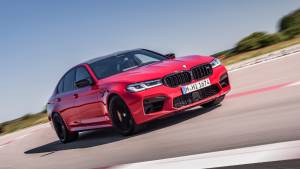 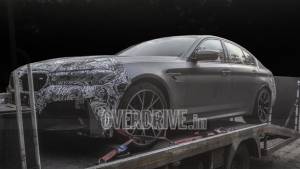