It's been a year since I last drove from Mumbai to Bangalore, it was on my old Honda City VTEC then. Well it is a really quick sleeper car now but back then the clutch needed replacement, the driveshafts and suspension were weak and the entire car desperately needed a service. I drove down to get the car fixed and then modded by my tuner in Bangalore. The drive eventually concluded in about 15 hours and I still can't believe the car actually didn't give up on me. Driving in a car that could have fallen apart anytime over the 1000km journey on one of the fastest driving roads in India was a challenge. The NH4 after entering into Karnataka transforms into a smooth, open highway that boasts some amazing views and many fast sweeping corners. These roads can easily handle fast cars and since they head home, I've always wanted to drive one on them. Now I was back on the same roads finally driving something very special, the most powerful Audi road car on sale today, the 560PS RS 7! And to make full use of the four-seats and capture the moments for the magazine, web and television, Varun, Rohit and Jamshed jumped in too. 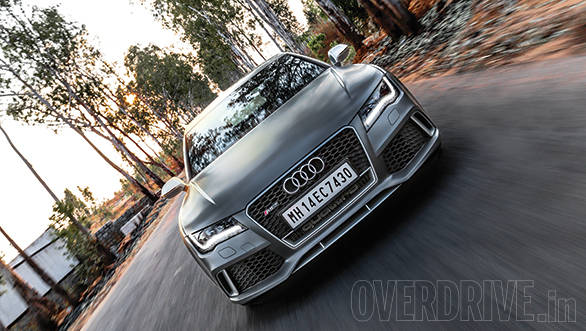 The RS 7 is an A7 on steroids. It features the same sportback silhouette and enough space to accommodate four grown ups and their luggage. Perfect. However, under the hood the motor is a twin-turbo 4.0-litre, petrol that makes a whopping 560PS and 700Nm of torque. These numbers are supercar like, in fact the RS7 is more powerful than the R8 V10 supercar! It may look like an A7 but one can't miss the huge air dam, the large oval exhausts, lowered height and those huge optional 21-inch wheels. Our car even featured the optional Daytona grey matte paint worth `12 lakh, that gives the car a stealth fighter appearance. And you can't miss the large quattro logo on the air intake. Inside, the car combines luxury and RS exclusive detailing. The car we drove featured carbon-fibre detailing and if needed one can choose between various other finishes for the inlays. The seats in our car even offered the optional RS sport seats. 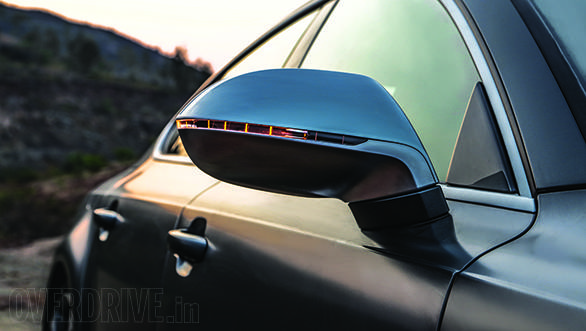 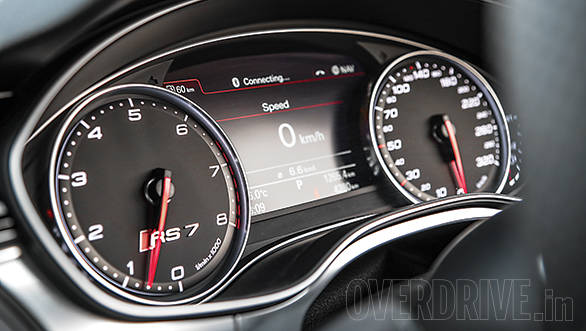 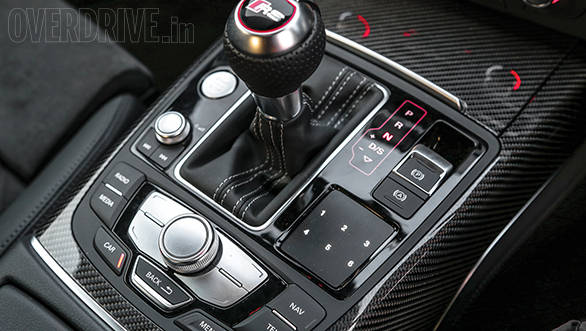 Getting out of Mumbai was easy, leaving early in the morning meant we missed traffic and were out on the highway in no time, the car features various driving modes, we left it in Comfort mode, in which the suspension becomes softer and power delivery is more linear too. Since we weren't driving with a heavy foot at all times and cruising mostly, the V8 even shut down four cylinders to save fuel using cylinder-on-demand technology. The transition from a 2.0-litre V4 to a 4.0-litre V8 is so smooth, you can't feel it. Driving in bumper to bumper traffic the previous day the car returned just 3.5kmpl, but with just four cylinders firing on the highway, the figure increased to an impressive 8kmpl. One may think, who drives an RS 7 to save fuel, but the fact that a 560PS car can also be economical makes the Audi so much more cooler and in our case reduces fuel stops.

The direct-injection motor is a smooth operator. In top gear, the car can cruise at 150kmph with the engine only revving at 2500rpm, and a slight dab on the throttle is enough to see the speedo go past 200kmph. However, more than high speed driving, we had more fun doing short bursts in Dynamic mode. This mode makes the throttle response more aggressive while the exhaust gets louder and backfires like a cracker during lift off. It's an addictive feeling and the eight-speed automatic makes it all the more involving by offering instant shifts. In fact every shift actually throws you back against the seat and if needed, one can shift manually through the gear lever or paddle shifters. The car is claimed to hit 100kmph in just 3.9 seconds, in our test, the car did it in 4.3 seconds and with four of us in the car and not to forget a fully loaded boot, the car managed the same in 4.6 seconds! This is an astonishing figure considering the car itself weighs close to two tonnes. The standard RS 7 is electronically limited to 250kmph but the car we drove featured the optional dynamic package and is capable of a 280kmph top speed.

If you want even more speed, the car can be tuned to max out at 305kmph if dynamic package plus is opted. Last year, we drove two really fast German sports sedans and I must say that the Audi has the potential to beat them. The car combines the A7's brilliant touring abilities and comfort with a motor that won't feel out of place in a supercar. Since the car is so ferociously quick, it even features standard 390mm front discs that are gripped by six-piston calipers. As an option, Audi even offers carbon fibre discs with ceramic pads. Around the long high speed corners on NH4, the car wasn't as involving as a few rivals, but it grips really well allowing one to make use of all the power. 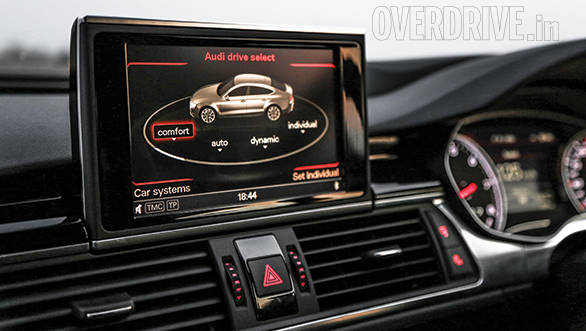 Talking about comfort, after driving close to 500km, we were still fresh and ready for another 500. The RS sport seats offer great support along with extended thigh support ideal for long drives. The ride in Xomfort mode is as smooth as the A7 despite running 21-inch wheels and the optional sports suspension. This unit uses steel springs and a three-stage adjustable damper instead of the standard air suspension. The car hasn't been designed keeping India in mind, but the Audi still easily drove through a few broken roads in Maharashtra and didn't scrape even once over speedbreakers during the entire drive. In Dynamic mode, the ride instantly becomes stiff. This mode is better suited for a racetrack so we set up the customisable individual mode to offer dynamic performance and a comfortable ride to offer the best of both worlds. Inside, there is ample space but for a tall person, rear headroom is lower than usual. The cup holders are too tiny for a small bottle or even a larger cup, a feature that we felt is important especially on long drives. Only two adults can sit in the back seat thanks to a high transmission tunnel, making it a strict four-seater.

Music is a very important aspect while driving long distances and the RS 7 stereo was put to best use. The car usually offers a standard Bose stereo or if opted, a more advanced Bang & Olufsen system, our car featured the latter. The system features 15-speakers putting out 1200 watts of total power. All four of us ended up playing our favourite music. After driving close to 13 hours, we finally entered Bangalore after sunset. The drive from Mumbai is normally shorter, but we had to stop for photography and video too. However we still ended up averaging close to 80kmph. The 75-litre tank was filled up twice and by the end of it, the car had returned an impressive overall fuel efficiency of 6.9kmpl.

In a country where one can't drive a supercar everywhere, cars like the RS 7 make a lot more sense. And unlike other hyper sedans, the RS 7 stands out from the crowd since it is based on the unique A7 Sportback. At a starting price of Rs 1.29 crore, ex-Mumbai, this rapid car offers more power for the buck, and think about it, how many cars are out there that can seat four in comfort, offer decent fuel efficiency and still entertain like a supercar. And speaking of supercars... 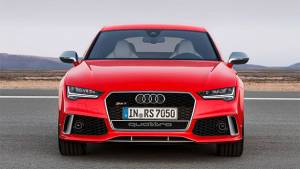 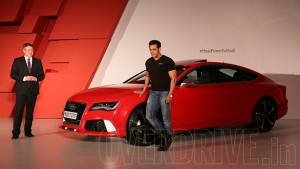 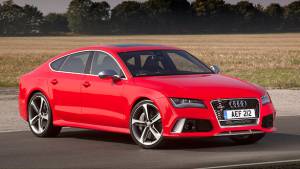