Nissan 360 is a unique event that brings together global media, Nissan's global communication teams and the entire range of Nissan products. This includes current and future Nissan products from all segments of the automotive industry, passenger cars and commercial vehicles. Held at the El Toro airbase near Newport Beach, California Nissan 360 now being held for the 4th time in nearly a decade was a mix of driving experiences and presentations.

I sampled a diverse mix, from hyper performance cars to executive sedans, SUVs, electric cars and even a 40-seater bus. As you can imagine it was an immensely interesting experience. 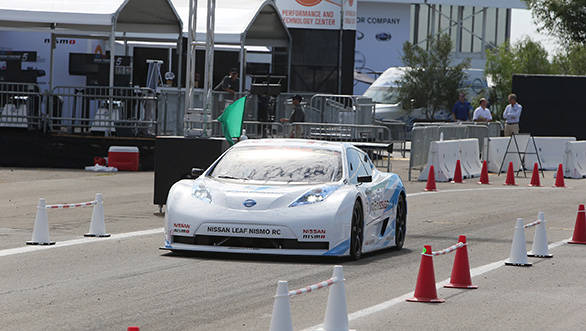 Two words. Electric performance. Together they evoke an emotion but just by themselves as two individual words electric...performance, it holds an entirely different meaning. Yet the former is a result of the latter. An electric motor has immense potential for the future of the sports car and in the discipline of racing. Electric cars need not just be about zero emissions and energy efficiencies as the Leaf Nismo RC amply demonstrated. This concept has deep roots in the solutions Nissan has been trying to provide for electric mobility. 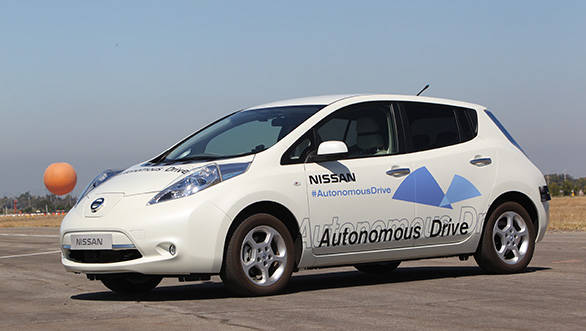 The donor car of course is the Nissan Leaf, an electric hatchback that has according to the slides I witnessed at the Nissan 360 event taken over the city of San Francisco

The donor car of course is the Nissan Leaf, an electric hatchback that has according to the slides I witnessed at the Nissan 360 event taken over the city of San Francisco. But where the Leaf is a regular city runaround the RC version could never manage it through city roads. This is a car that was built exclusively for a racetrack, so the stance follows a traditional race car design. Low stance almost hugging the surface, big flared out haunches to add downforce over the wheels and a massive spoiler to make the aerodynamics work even more efficiently.

It may sound a bit much for an electric car, but here is the thing. An electric car provides maximum torque from the word go. All of it in fact is delivered straight to the driven wheels the instant you push your foot down on the throttle. The response is like turning on a lightbulb, throw a switch and the room is instantly flooded with light. The acceleration is instant. The challenge here is to understand just how deep you need to bury the throttle into the floor pan. In an IC engined car the engine note is an indicator of how fast you are entering, passing and exiting a corner. In an electric car there is no engine note, and you have to rely purely on the sensation of speed, the physical forces being applied on the car and the steering response to understand what the limits of the car are. Sound however is vital to all of this coming together and the lack of any engine noise feels a bit disconcerting. 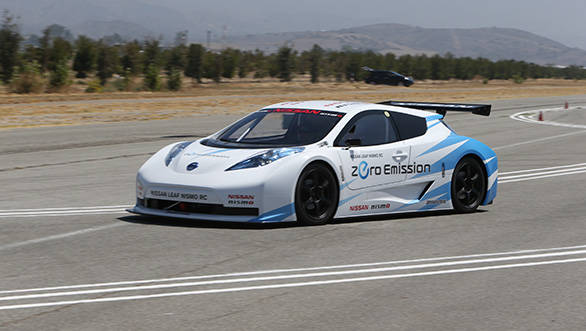 The Leaf RC uses a 79.8kW motor that pushes out 253Nm of max torque to the rear wheels through a LSD

The Leaf RC uses a 79.8kW motor that pushes out 253Nm of max torque to the rear wheels through a LSD. The battery stack that provides power to the electric motor can be found right behind the seats.  The transmission has one infinitely tall ratio, so you don't have to change gears and it behaves like a CVT, except there is no whine. The strongest point of an electric motor is that there are no gaps in the power delivery, no flat spots and definitely no weak areas. It's the most linear delivery you will experience and the acceleration is breathtaking. You tap the throttle pedal to change its position by a couple of degrees and nothing happens. You jab it harder and it simply explodes in your face.

The entire structure is made out of carbon fibre and that makes this an incredibly light car. The electric motor combined with the weight of the transmission is lighter than a comparative IC engine. But, the battery pack is significantly heavy and its a challenge to make these lighter yet provide enough juice to keep electric mobility relevant. Nonetheless the Leaf RC is all about performance and how electric cars are perfectly capable of holding their own even on a racetrack. 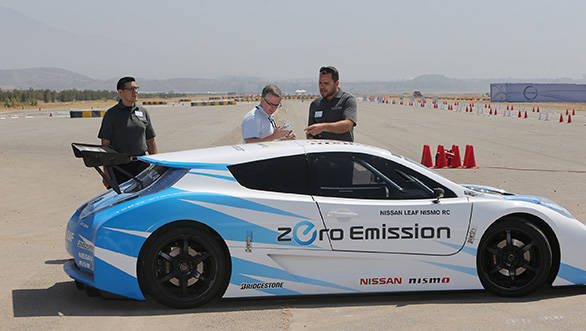 For the rest of the characteristics needed around a racetrack like precise neutral handling, the Leaf RC can be tuned and modified to the track conditions. The project is teaching Nissan several lessons about performance cars powered by electric motors. Its still in conceptual stage but the project is perfectly viable to get on the floor. The day may not be far where we might actually see an electric powered sedan race car blazing tracks across the globe.