You can call me Sharma. I'm the teller at ICFC bank. My wife recently said that I have to stop traveling by bus or she will stop sending me a dabba for lunch. She says I have to buy a motorcycle. There are three conditions  mileage, riding comfort and looks. I just heard that there are two new motorcycles in the market  the Honda Dream Neo and the Mahindra Centuro. I can't make up my mind about which one to buy. So I am going to list out the things that I like and dislike about each of them to help me make up my mind. 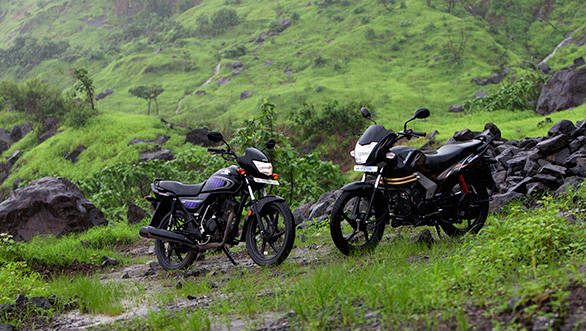 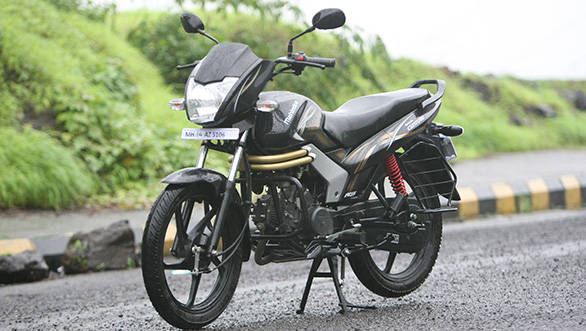 The Centuro is the better looking of the two

The Mahindra Centuro reminds me a lot of the TVS Flame that was on sale a while ago especially the front end. It is an eye catching design with its golden "ribs" under the tank. It makes all my friends say "Kya design hain, boss!" I like the fact that it has a distance to empty reading in the instrument cluster as well as a trip meter. It saves me the trouble of pushing my bike to a fuel station if I run out of fuel, especially since these fellows at the petrol pump have stopped giving fuel in bottles. It also features a tonne of goodies like LED pilot lights, LED tail lights, a car-like key fob with a bike locater function, follow me home headlamp, a little torch on the key and a headlight that has much better throw than the Honda's. Again, "Kya features hain, boss!" 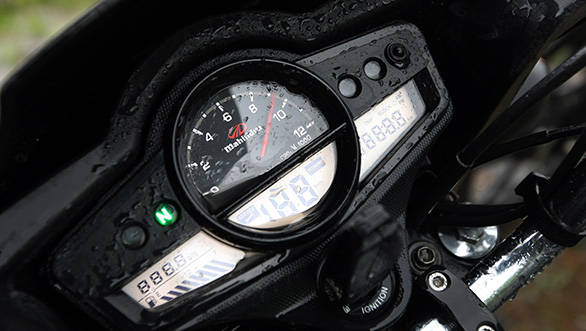 The Centuro gets a completely digital instrument cluster with a speedo, tacho, trip meter, fuel gauge and a distance to empty display

The seat however isn't that great. Two reasons  the foam is too soft and the seat itself isn't wide enough. In comparison, the seat on the Dream Neo is wider and the foam is not as pliant. This means I'm not left sitting on the seat pan at the end of my work commute. And no, it's not because I need to lose weight! The riding position too is much better in the Dream Neo. I was sitting more comfortably thanks to the fact that there was more space between my knees and the handlebar. When compared to the Centuro, the Dream Neo definitely felt like you were sitting on a bigger bike. 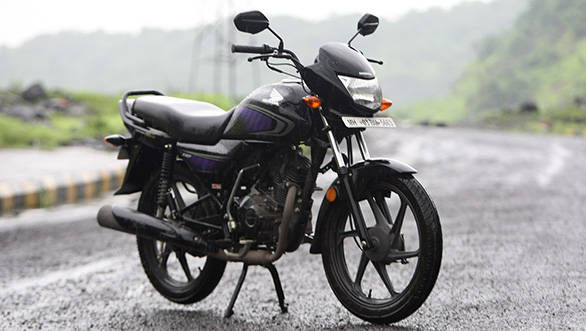 The Dream Neo looks identical to the Yuga

The Dream Neo looks a lot like the Dream Yuga. Visually the only difference is the tail section. The styling on the whole is quite pleasant. It doesn't have any of the unnecessary flair. If the Centuro is like my college going brother-in-law Rohit, the Dream Neo is like my almost retired father-in-law, Mahesh-ji. There is an analog instrument cluster with a speedo and a fuel level indicator. There are no fancy LEDs, no remote light on the key, no golden "ribs". But despite all this, the motorcycle is quite smart looking. 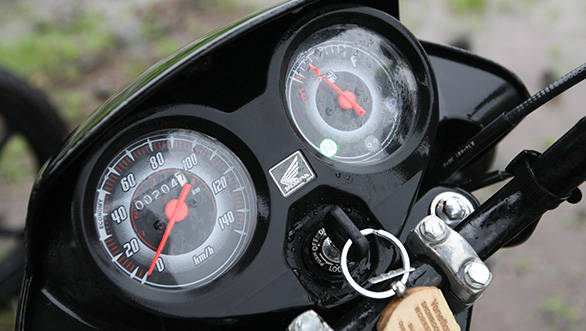 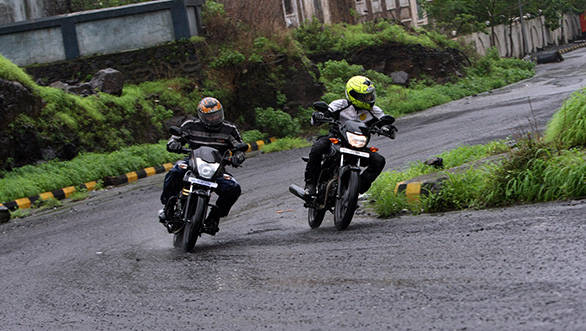 I'm not one to go corner carving on my motorcycle. The most important aspect for me has to be a plush ride. But then it shouldn't be so plush that with my wife and me sitting on it, the suspension keeps bottoming out. With this in mind, both the Dream Neo and the Centuro work for me. They both soak up undulations reasonably well.  The Dream Neo is a bit harsher while the Centuro feels more plush. Both bikes feel pretty stable over bad roads. The Centuro especially feels more planted while the Dream Neo's harsher ride did make me think twice about going over bigger potholes. Even when it comes to braking the Centuro performs much better. The Dream Neo, well let me just say that the Centuro stops quicker. (Official test results show that the Centuro comes to a halt from 60kmph in 27.68m while the Dream Neo takes 28.65m). I rode both motorcycles in the rain and both of them felt quite stable. Even when taking sharp turns, they never seemed to get unsettled. 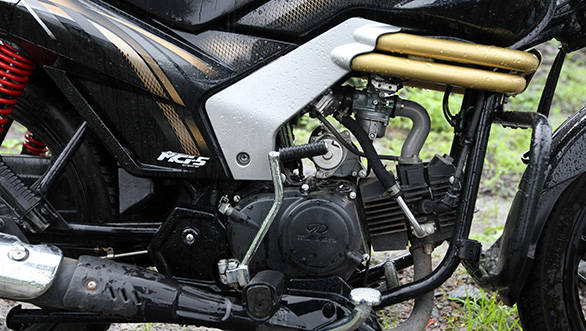 The 106.7cc motor of the Centuro gets a high pressure oil pump now 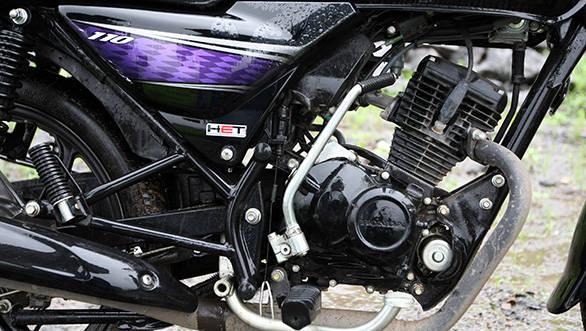 The Honda's engine has a lot more "dum". One part where the Honda really stood out was when you needed to ride it around in light traffic. The Dream Neo feels more rideable. There are less gear shifts and I didn't need to downshift every single time for an overtake. The Centuro on the other hand feels seriously lacking in this area. In fourth gear, if you want to quicken your pace a bit, you have to drop to third gear more often than not (the Centuro takes 26.4s to do 40-80kmph in 4th gear while the Honda takes just 17.3s).

Both motorcycles could manage around 85kmph on the occasional highway stretch on my commute. But then if you're riding either bike at that speed, then there is just too much vibration. But at around 60-70kmph both motorcycles feel ekdum smooth. The Honda a little more than the Centuro. But not by much.

All this refinement and stuff don't mean much to me but what does matter is the average. From that point of view it is the Honda that wins. It gives me 69.6kmpl in the city and 76.7kmpl on my occasional ride out of town. The Centuro on the other hand gives me 78.6kmpl on the highway and 65.4kmpl in the city. The Dream Neo has a 8 litre tank while the Centuro has a 12.7litre tank. With an average of 68.7kmpl (Centuro) and 71.4kmpl (Dream Neo) this lets you travel around 571km for the Honda and 872.5km for the Mahindra. Lesser fuel stops for the Mahindra then. 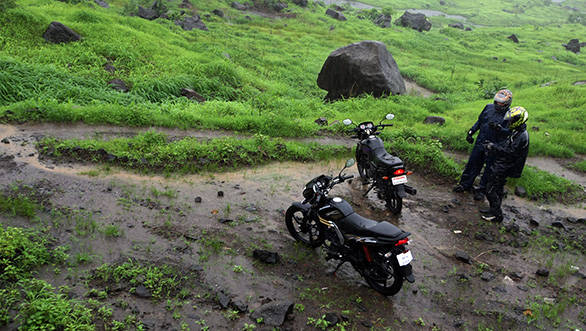 Now you will know why I am in so much confusion. Both these bikes are very close to each other in terms of performance and efficiency. But then there is the most important factor left to discuss. Price. The Honda Dream Neo costs Rs 50,426 while the Mahindra Centuro costs only Rs 44,784 (both ex-Mumbai). If I had to pick a bike without considering the brand, it would without a doubt be the Centuro. Despite all of Mahindra's promises I am still not confident of how this bike will age. Likewise, the strongest case in the Dream Neo's favour is that it is a Honda. But then there is that difference of Rs 5,642. For that price I get more features, performance and economy almost as good as the Dream Neo, and fresher styling. Saving some money while still getting an excellent product? Sounds like a great deal to me. 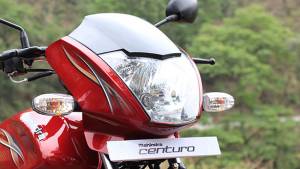 What the Centuro means for Mahindra Two...
Advertisement