Every time I drive the EcoSport, I walk away impressed. Last time it was the diesel version and I loved the light controls - the light and quick steering as well as the progressive but light clutch made it such an easy car to drive. I also liked the comfy seats and the plush ride; the latter never demands you slow down no matter how bad the road. The really large potholes can send in a loud thud but the impact was never hard enough to make me cringe. The EcoSport handled beautifully and the braking was spot on too. There were a few shortcomings, of course. The interior plastic for one could certainly do with an upgrade, and the build quality too could be upped a few notches. Take the car I am driving right now: it has done less than 5,000km, but its insides have already started rattling; the plastic on the doors and the dashboard near the air-con vents in particular. It's also not very spacious. And the boot, for something positioned as an SUV, is tiny to say the least. 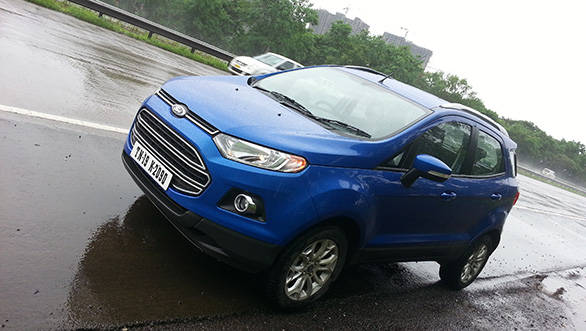 The version I am driving is identical to the diesel on all the above-mentioned counts, positive and negative; only, it is even easier to drive especially within the city. And that's because this is an automatic. At just under Rs 8.5 lakh ex-Delhi, the EcoSport AT is well-priced as well, especially when you consider it is the Titanium trim. So, there's the usual allotment of comfort and safety features on board from digital climate control to a multifunctional steering wheel and Bluetooth telephony. There's ABS and two front airbags too. Additionally, exclusive to this version is ESC or a stability programme which corrects slides or skids by selective braking of wheels to straighten out the car. This automatic also gets side and curtain airbags over the manual Titanium trims, taking the overall airbag count to six on this model. 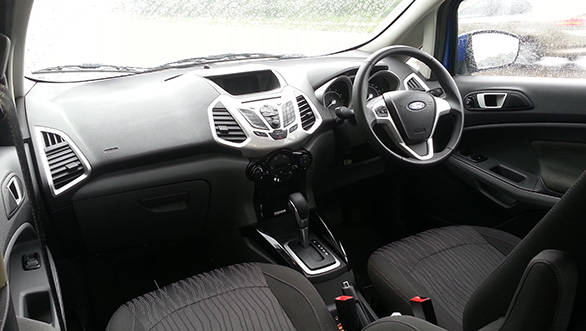 We also like the way the automatic EcoSport drives. The gearbox is a six-speed dual-clutch automatic, so it is quick in its shifts and seamless for the most part. It's only in the lower gears - when shifting through 1st and 2nd - that the shift shock is evident. The gearbox comes with two driving modes - D and S (for Sport) - with the former being setup for economical driving, while the Sport is meant to bring some fun into spirited driving. In D, the 'box chooses to upshift at about 2,500rpm when driven normally returning a good balance between drivability and economy. 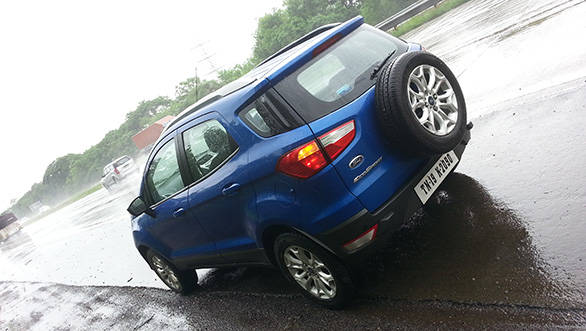 At just under ? 8.5 lakh ex-Delhi, the EcoSport AT is well priced as well

But, if you want to get things moving along in a hurry, depressing the throttle progressively doesn't give you the desired results as the gearbox chooses to remain in as high a gear as possible. Stamp on the throttle hard, and it does drop down a couple of gears to get you up to speed, but again, it could be quicker in its reactions. In Sport mode, the downshifts don't require you to be overly aggressive with the throttle. However, unlike most other automatics wherein the 'box generally selects a lower gear or maintains a higher rpm for a given road speed in Sport mode for improved throttle response, on the EcoSport there's no such differentiation. But, yes, the EcoSport does hold on to gears longer in S compared to D. 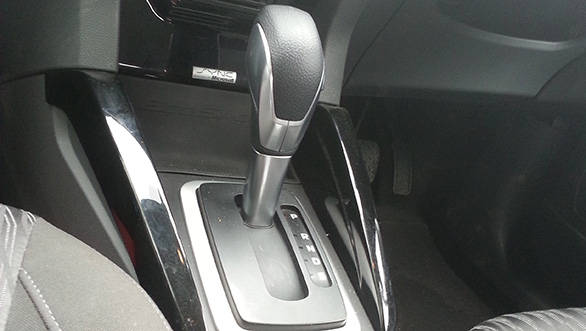 The gearbox is a six-speed dual clutch automatic, so it is quick in its shifts and seamless for the most part

It also downshifts unobtrusively at speed in higher gears if you suddenly choose to go deeper with the throttle pedal. The downshifts also give you a sense of push and linearity very close to a mildly turbocharged engine coming on full boost in this situation. But, the bigger difference between D and S is the option to shift gears manually in the latter. No, the EcoSport doesn't get paddle shifters, and no you can't move the gear selector either to shift up or down.

Instead, Ford has given this unconventional and cold toggle on the gear selector to work the manual mode. The toggle might not be to our liking, but the manual mode certainly is. It gives you a higher sense on involvement and one can also make full throttle shifts up and down the gearbox which makes it quite handy when tackling a twisty section with enthusiasm.

The dual-clutch auto is mated to a 1.5-litre petrol, but unfortunately this is the only engine one can have with the EcoSport automatic. We would have loved to have the EcoBoost mated to the dual-clutch 'box, but as is the case with diesel automatics, cost is an issue for this combo as well. 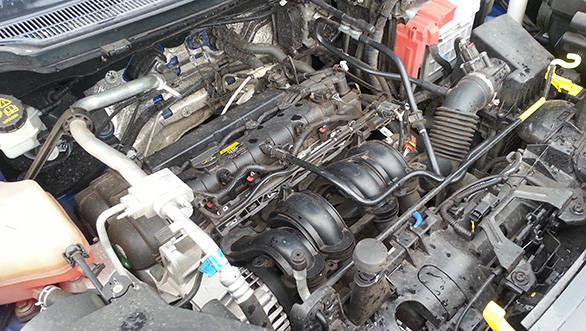 The dual clutch auto is mated to a 1.5-litre petrol, but unfortunately this is the only engine one can have with the EcoSport automatic

This 112PS, four cylinder engine, meanwhile, is the same petrol unit that comes in the Fiesta. It's not the most refined engine out there or the easiest revving. It doesn't boast of a very potent low and mid-range either, but it is enjoyable. It sounds nice for most of its operating range and proves involving past 4,500rpm all the way to its 6,500rpm redline. It works well with the transmission too.

So, who should buy the EcoSport automatic, then? Well, for starters if you commute to work daily in any of the bigger cities like Mumbai, Delhi or Bangalore, you should only buy automatics. Manuals really aren't worth the effort. Now, for a similar price as the EcoSport auto, one can also buy the Polo GT TSI. But, if it's an SUV stance you want, the Ford really is your only auto option for under Rs 10 lakh. And a pretty good one at that.