Premier has taken another step in the right direction with their compact SUV - the Rio. It's now available with the 1.3-litre Fiat Multijet diesel engine. And this will allow Premier to sell the diesel Rio in large cities and metros where the old car, a BSIII level emission, 1.5-litre diesel engine couldn't be sold. The diesel will be available in two levels of trim, the LX you see in this test which is the top end version that retails at Rs 7.01 lakh and the DX (lower end) version which retails at Rs 6.74 lakh, both ex-Mumbai.

To look at, the Rio in its new 2012 avatar is much more a pleasing picture than its predecessor. Its lines bring back memories of the old Honda CRV and the wraparound headlamps, new body coloured bumpers and large round fog lamps give the front a more modern and youthful appearance. The CRV-ish look is quite familar now but still is a refreshing change and with the roof rails help the Rio look more SUV-like than over grown hatchback. That is until you pull up next to a real SUV and can't help feeling that the pretence is up.

Inside, the cabin layout is the same as the petrol we drove earlier this year (March issue) and leaves a lot to be desired. It's a mix of hard plastics, poor finish and colour mismatches. The placement and design of some of the buttons and switches could also do with a little more thought. Take for example the switches for the front power windows of which there are three different types of switches on the driver side. They are different in feel and operation and their functionality is not intuitive. Just one type of switch would have been simpler to operate and might have been cheaper to manufacture as well. The instruments also are exactly the same as the petrol version and the tachometer is still redlined at 7000rpm even for the diesel mill which in reality can't rev past 4500rpm. Little niggles for sure, but something that Premier need to solve first before they attract buyers from metros and Tier-I cities.

The interior dimensions may be small but there is enough room to keep passengers elbows from fouling up. The second row is adequate for two grown-ups with enough shoulder space and knee room, three would be a very tight squeeze. The problem is the seats themselves, they are flat, featureless and without contours to fit anybody. That bench is also quite upright, so long distance journeys are not going to be comfortable. However the boot swallows up to 454 litres and when the second row of seats are folded you can carry up to 1158 litres of luggage which is comparable to the load space larger SUVs provide.

The Fiat partnership may have ended but the heart of the Premier Rio diesel is Fiat once again, and the 1.3-litre diesel driving the rear wheels is a great step up for the little SUV. The Multijet, multi-car engine (Maruti, GM, Tata and of course Fiat have many models with this very same engine) drastically improves the performance and driveability of the Rio. At 14.99s to 100kmph the new Rio is over seven seconds quicker than the old 1.5-litre mill. Fifth gear roll on figures which are faster than the old car by a whopping 14.4s too. We never got a chance to test the 1.5 engine's mileage but the Multijet figures (21.76kmpl highway, 16.63kmpl city) are better than the claimed figures for the old engine.

Refinement has improved significantly, thanks to the engine and some improved sound deadening. You can hear a faint diesel clatter in the cabin but it's not going to interrupt anything.

Driving the Rio is a mixed experience and while you do get good ride quality, with 200mm of ground clearance over bad roads, the trade off with this high stance is generous body roll around corners. Its the combination of that tallish stance and the small 15-inch alloys or 14-inch steel wheels, neither of which is conducive to tackling narrow and sharp urban allyways with urgency. Its small(er) size however means that this is an SUV that you can dart through traffic with and it does fit in surprisingly small gaps. We even surprised a couple of autorickshaw drivers when we very easily maneuvered ourselves into spaces only they were expecting to go. The hydraulic power steering though is not quite up to the mark and is on the heavy side while manoeuvring slowly (while parking for instance) and gets light at highway speeds leaving you a little uncomfortable once the speedometer crosses the ton. Braking from speed is also not confidence inspiring. While the ABS and EBD work and the Rio comes to a stop from 100kmph in just 3.39s it's not quite confidence inspiring in execution with one having to make steering corrections constantly to ensure it stays in a straight line as the  electronics do their job of bringing the car to a stop.

The Rio was a pioneer in the compact SUV segment and does have some good things going for it, namely the multi jet diesel, its compact size and the price. It's ultimately let down by poor interiors that could have been better designed. It's monopoly in the compact SUV segment has ended and there are other options for buyers to choose from like the Renault Duster which is a better package and the entry level diesel variant is Rs 98K dearer than the LX. Another, bigger threat will inevitably come from the Maruti Ertiga which offers an extra row of seats, quality interiors and is Rs 70K more than the top of the line Rio.

Premier had a jump start on the competition and has even taken a step in the right direction to improve the Rio but I don't think they have done enough. 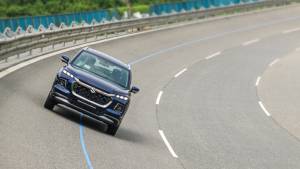