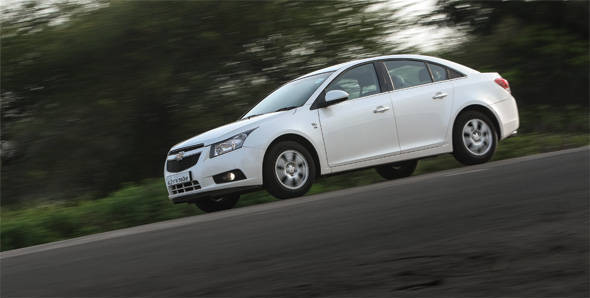 Chevy's been busy these past few months. At the Expo in Delhi they showcased their new Captiva and a new Tavera. The Captiva got a complete overhaul with a new look and a tweaked engine. The Tavera got a 'Neo' badge and a new look. There are also a lot of camouflaged Beats being spotted all over the country. So when we heard news of a new Cruze coming we thought it would be the one we sneaked a peek at the 2012 Busan Show in South Korea. Imagine our disappointment when the car we received was the same old Cruze. Frantic calls to GM were made and they told us two things that immediately shut us up. More power. More torque.

The Cruze has always been a smart looking car and two years down the line this has not changed. And since there have been no changes on the outside I won't waste any time there. The previous gen Cruze made 150PS which has now been boosted to 166PS. Torque too has gone up to 380Nm, a jump of 57Nm. How did they manage to find those extra horses? They added 7cc of volume to the engine, redesigned the block and the head, gave the motor dual overhead cams driven by a chain to replace the belt driven SOHC unit from earlier, moved the turbo forward to reduce the distance between the air intake and the inlet manifold, increased the injector's pressure to 1800bar from 1600bar and also gave the car an all new dual mass flywheel. Apart from this there is also a new 6-speed manual tranny that replaces the 5-speeder from before (the AT gets reworked ratios but the same 6-speed torque converter).

What do these changes mean in real life? If you remember the old Cruze had lots of turbo lag which made it a rocket once the turbo spooled up but limp and lifeless when crawling around at low revs in traffic. This meant usability wasn't the best. The perfectly square 2.0-litre common-rail diesel now feels more linear with the VGT delivering power at a more reasonable 1600-1700rpm and full boost coming in at around 2000-3000rpm. There are two problems however. The clutch in the manual is extremely springy, has a long travel and an early release. This meant that you are always tempted to ride the clutch while driving in traffic. The other issue is that we just cannot figure out where the 57Nm went. Other than on paper we just could not feel that kind of a jump in torque. Even our tests revealed the same. The old car used to hit three digit figures in 9.4 seconds. The new car takes all of 10.22 seconds for this. Agreed that we were testing in slightly wet conditions, but such a huge difference is not really justifiable. The quartermile is crossed in 17.12 seconds making it slower to the outgoing car by 0.28 seconds. Surprisingly, the AT is quicker than the previous gen avatar by 0.13 seconds posting a 0-100kmph time of 9.73 seconds.Not a lot to differentiate, but it still helps the Cruze stay ahead of the Laura TDI with the DSG box and continue to retain the crown for the quickest accelerating automatic car in its class. The new engine means the fuel efficiency has changed. We tested the manual transmission version and covered 9.8kmpl in the city and 16.3kmpl on the highway, the old Cruze was more economical in the city returning 10.6kmpl but a lesser 15.1kmpl on the highway. This translates to an overall figure of 11.43kmpl compared to the older car's 11.73kmpl.

The car will continue to be offered in three variants  LT, LTZ and the LTZ automatic. The LT is priced at Rs 14.53 lakh, the LTZ manual at Rs 15.49 lakh and the LTZ automatic at Rs 16.44 lakh (all prices ex-Mumbai) The base variant now gets dearer by Rs 1.38 lakh but comes with additional features like keyless entry, six-way adjustable seat, premium stereo, fog lamps and adjustable steering wheel. The LTZ variant features the same extra features as before such as steering mounted controls, 16-inch alloy wheels and dual-airbags. The feature loaded LTZ and LTZ automatic have gone up by Rs 62,000 and Rs 66,000 respectively and get the same additional features like before such as an electric sunroof, leather wrapped steering wheel, rear parking sensors, rain sensing wipers and cruise control. The new Cruze may have a more powerful motor but it disappoints when it comes to on road performance compared to the previous car. The fuel efficiency has also dropped while the price has gone up considerably. But for dieselheads looking for a powerful D-segment car that also looks smart and is high on features, the Cruze is still a good buy. 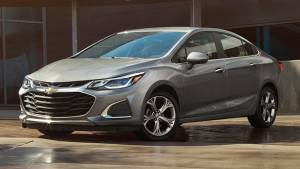 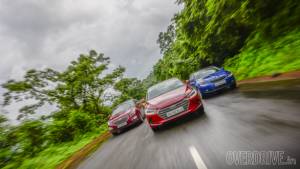