Suresh KV is the new country head of ZF India Private Limited. His  appointment has been effective since June 1, 2015.

An SP Jain Institute of Management and Research graduate, Suresh KV will be responsible for business development as well as performance enhancement of ZF India Private Limited. He has been working with the company since 2007 and takes over his new office from previous head, Piyush Munot.

Speaking about the new appointment, Rudi Von Meister, president, ZF Asia Pacific, said, "As ZF opens this new chapter, the ZF Board and I are confident that Suresh KV is the right person to lead the company in the Indian market. Suresh KV has been working with us since 2007 and was appointed as the executive director of ZF Wind Power Coimbatore Limited in 2010. He has a proven ability to create strategic clarity, drive innovation and growth, ensure disciplined execution, and deliver results. We believe that under his leadership ZF will continue to deliver innovations and customer satisfaction that will have a positive impact on the Indian market. I would also like to take this opportunity to thank Piyush Munot for his much appreciated support and commitment to the expansion of the ZF presence during his long tenure with the company." 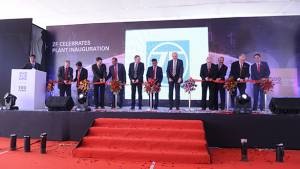