Yamaha website revstation.com is hosting a countdown clock and this video. It shows what looks clearly like a scooter based on the Tricity concept and a motorcycle that looks visibly like the R6 in broad strokes and is rumored to be the new R25 two-cylinder sportsbike or the R3 single-cylinder sportbike.

The countdown clock suggests that the global unveil of the production Yamaha Tricity and Yamaha YZF-R25 or YZF-R3 is set for next week.

The Yamaha YZF-R25 was first shown at the Tokyo Motor Show and we broke that story here on OVERDRIVE. The R25 is expected to be Yamaha's small-displacement entry sportsbike for the world. It is set to compete with the likes of the Kawasaki Ninja 300, the Honda CBR300R and the forthcoming KTM RC200/390. While we expect the motorcycle to come to India there are challenges ahead for Yamaha. Werelegating it to playing the same edges of the market the Kawasaki Ninja 300 currently does. The Rs 3.61 lakh (on-road Mumbai) Suzuki Inazuma also points to the difficulties of making small-displacement twins cost effective in India. 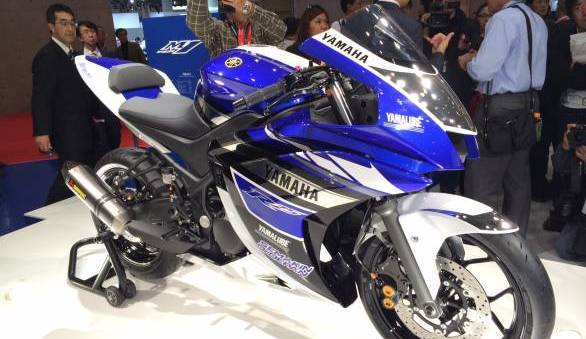 Which is why - and now we have international reports also suggesting this - we were also the first to suggest that there are actually two motorcycles under the YZF-R25 Concept. The 250cc twin would work in some markets only. These are markets like the USA where for example the CBR250R single is priced just below the Ninja 300 twin.

Other markets, like much of South East Asia and India would get another model likely called the R3. This would be visually similar to the R25 but be powered by a new 300cc single. We believe this bike will arrive either by the end of this year or by April next year. Yamaha's 2014 product plan already is rumoured to have a 125cc scooter and updates to both the FZ commuter line and the YZF-R15 sportsbike.

The Tricity is Yamaha's new proposal for the growing three-wheeled scooter market, especially in Europe. Three-wheeled scooters not only get license breaks but are also easier to pilot, cut the risk of falling off the bike and are easier to park. Yamaha says their Tricity will be lighter than the current competition and add a sportier flair to the segment. The concept was said to be powered by a 125cc engine. While the three-wheels aren't visible on the video, the headlight and panels shown are identical to the concept.