Tom Sykes started his 2015 win counter in spectacular form on Sunday with a double win at the Leicestershire Circuit. The 2013 World Superbike champion showed excellent form to fight off team-mate Jonathan Rea in both races to take his wining streak at the circuit to a triple double, or six in a row. 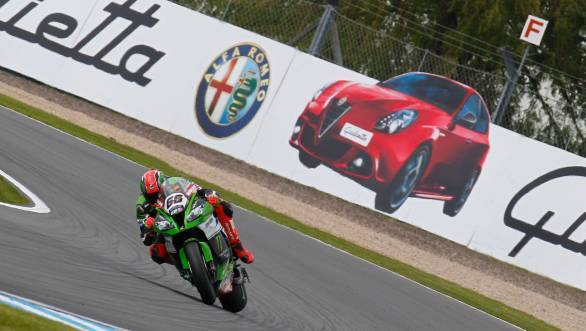 In Race One Leon Haslam shot to the front at the start, but then the two Kawasaki riders soon found their way to the front and then proceeded to trade places in a bid for the lead. Sykes finally managed to break away from Rea to take the victory. Championship leader Jonathan Rea finished in second ahead of Ducati rider Chaz Davies.

In the second race Sykes was more dominant, shooting off into the lead from the start after turn one. He didn't look back from there, pulling away from the pack at record pace for his second victory of the year and equalling Carl Fogarty's feat of six consecutive wins at Donington. Jonathan Rea finished second after recovering from a mid-race slip up that saw him fall to seventh. He keeps intact his feat of having finished every race in 2015 in either first or second place. Chaz Davies was again the best of the rest in a race weekend dominated by the Kawasaki duo.

Round seven of the Superbike World Championships will take place in Portimao, Portugal in two weeks' time.