Tom Sykes won both Race 1 and 2 at the World Superbike Championship round at Misano this weekend. His team-mate Loris Baz finished second. Marco Melandri, who won both races of the previous round at Sepang, finished third in both races at Misano. 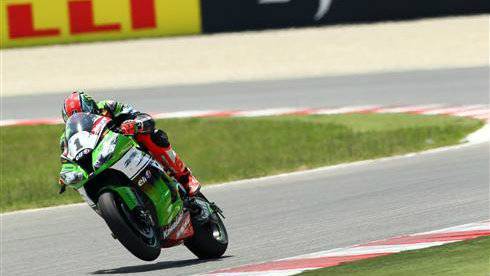 Although Marco Melandri started from the pole in Race 1, he wasn't able to maintain his lead. Initially it was Toni Elias who led the pack, however, he was soon passed by Sykes. A few more mistakes by Elias and Guintoli meant that it was the Kawasaki riders who then headed the pack. And while the positions remained unchanged, Sykes kept pulling away from Baz lap after lap. Guintoli finally ended up fifth with Chaz Davies in fourth position. Both, Aaron Yates and Geoff May from Team Hero EBR couldn't complete the race.

In Race 2, the gap between Sykes and Baz was reduced from five to three seconds as the laps went by. Nonetheless Sykes maintained a solid lead most of the time. It was only during the opening laps that he was behind Davide Giugliano, who was eventually penalised for an early start and was asked to ride through the pits finishing ninth. Second place on the podium was a hotly contested battle which ended with Baz getting hold of the spot. Melandri and Guintoli ended the race third and fourth respectively. Chaz Davies had crash in Race 2 that put an end to his run. While Aaron Yates couldn't start the race, Geoff May only completed 16 laps with mechanical issues ending his run as well.