Slowly details of proposed 2017 version World Rally Cars are being released. During the 2016 Polish Rally, Hyundai Motorsport's Competition Director Michel Nandan gave some preliminary details of the car which his team is planning to use. Following assurances earlier in the year that the unexpected change of production plans meant that the 2016 rules i20 WRC car with a four door body would then serve as a running development car for the 2017 car, it was therefore a surprise to see spy pictures of the prototype 2017 car with a two-door chassis. Nandan explained: 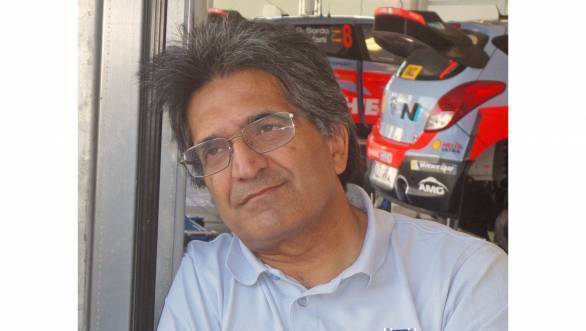 MN: The (three door) Coupe i20 will be the basis for our '17 car. This is the model we were hoping to use in 2016 before production plans were changed, preventing us from running the Coupe version in '16. Our '17 WRC car will be based on the latest version of this car. The car we have been using in our tests so far is a mixture with '16 suspension, '17's transmission and things like. It is a real 'mule'. We had one Coupe body shell available from last year on which we had already started work before we heard we could not use it for homologation at that time. With this mule it has been possible to test some new components and this is what we did since beginning of April (2016). In parallel we are assembling the first 2017 car which is based on (a latest version of) the same body shell. In fact what is essentially different (with the 2017 version) is just the pickup points of suspensions, because of the new regulation (wider cars etc), but all the rest is really similar. Roll cage is the same and so on ...

MH: How does the Coupe vary from the old four-door 2016 version i20 WRC? Presumably it is smaller?
MN: No, it is almost exactly the same size. The platform is the same because it is the same family of cars. The wheelbase is the same, the body platform is the same, engine installation is similar, every thing is really the same. The only real difference is the number of doors. There are changes to the front bumper of the road cars which I think are for reasons of design. In fact there is only a five millimetre difference on the total lengths between four door and three door.

MH: Will the 2017 rally car have the same engine in 2017 as the engine for 2016 but with a bigger turbo?
MN: The engine we are using at the moment on our mule car is a '16 engine with a '17 turbo and bigger restrictor, but the '17 rally engine will have an evolution of that engine in a way that we have tried to improve a bit. So it will not be a big difference but we are working on the packaging. The cylinder block is bit different in design, cylinder head as well, but from the principle it is similar to 2016.