Gaurav Gill and Team MRF headed to the 2018 World Rally Championship's Finland round for their second run in the championship. The Neste Rally Finland, which Gill, and co-driver Glenn Macneall, contested in a Team MRF M-Sport Fiesta R5 proved to be a learning experience, but was not without complications. The duo were forced into retirement on the first day of the rally due to a technical failure, and managed to restart the next day, gaining valuable experience on the new tyres that had been introduced at the event, meant specifically for tackling the high speeds and continuous jumps that make up Finland's stages. 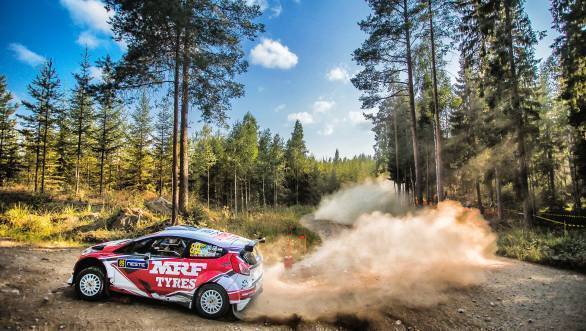 Speaking of the event, where Gill was a non-priority driver in the championship, he said, "Finland is about confidence - the roads are so fast and there are so many jumps that you need the confidence to be on the pace. We were gaining confidence over the weekend and you can see we improved a lot on our second runs through the loops."

Given that the duo had retired on Friday, and returned to the rally running in Rally2 regulations, the goal was to gain as much experience as possible. The team made changes to the M-Sport Fiesta during the mid-day service and then were able to unlock additional pace, helping Gill and Macneall run strongly in the R5 class (RC2). 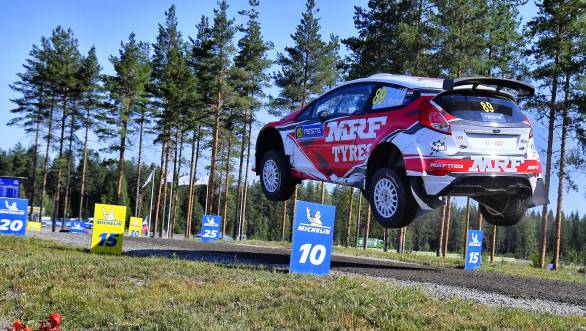 Gill managed a personal record for longest yump at Rally Finland, with 50 metres at a pace of 180 kmph!

During the Sunday of the rally, the team had to contest four stages, two runs through the 11.4 km long Laukaa stage, and two runs through the 11.12 km Ruuhimäki stage. Gill was able to improve his pace by more than a second per kilometre in the second loop. "The MRF Tyres worked well on the stages which gave us the confidence to push. I am happy with the weekend and we certainly have a lot more information to the further develop our tyres," he said. "I was happy to be able to improve my times and show the performance of the MRF Tyres team in this legendary event," he continued.

The next outing for the MRF Tyres Ford Fiesta R5 will be the Dayinsure Wales Rally GB between 4-7 October.