There was a different winner for the first time in seven years for Monte Carlo Rally, and only the third different driver to win the world championship event since 2007. On his ninth attempt Thierry Neuville came through in his Hyundai i20 Coupe WRC to dominate the final day: took the lead, was fastest on all four stages and won the Power Stage by .016 second to secure maximum points score on the opening round of the 2020 WRC. Neuville also carried competition number 11 and it was his 111th WRC appearance. Last year he finished second by just 2.2 seconds. This year victory was Neuville's by 12.6 seconds, beating the seven times WC winner of this event Sebastien Ogier and his Toyota teammate Elfyn Evans who had led in their Yaris WRCs after 11 of the 16 stages. It was a splendid start to the new season with the lead changing seven times. World Champion Ott Tanak did not have an easy start to the defence of his title with his new Hyundai team, going off spectacularly on the fourth stage and being unable to continue. There was a clean sweep in the R5 categories for Citroen. The Rally 2 class being led throughout by the Amateur (WRC3) driver Eric Camilli and the professional (WRC2) category being won by Mads Ostberg, both driving C3 R5s. Best driver of a two-wheel drive car was the American Sean Johnston in a RC4 winning Fiesta. 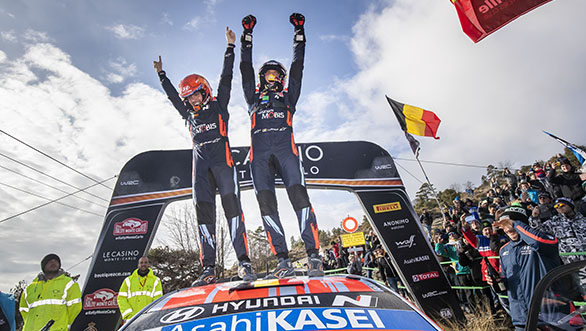 An almost precedented series of line-up changes among the top team drivers created considerable excitement in the build-up to the rally but it was not long before it was clear that Toyota and Hyundai were the cars to beat. Best other World Rally Car make was M-Sport Fiesta were far behind whose drivers Esapekka Lappi and Teemu Suninen both only scored a top three stage time once all event, Lappi finishing fourth overall but over three minutes behind the leaders. All through the event only three drivers held a positions in the top three - Ogier (Toyota), Neuville (Hyundai) and to the delight of British fans, Elfyn Evans (Toyota). Seven times through the 16 stage event the lead changed hands, Evans holding or sharing the lead leading or sharing the lead after 11 stages. The excitement continued all rally, with the leader Evans dropping down to third in the final three stages. Neuville won nine stages, Evans four and Ogier three. Apart from Tanak's results on the short first evening, the best result scored by other drivers were for Tanak on stage 2 and by Loeb on stage 3.

Unfamiliarity with their new team cars did not slow the current world champion Ott Tanak (now in a Hyundai) but who then crashed on stage 4 after lying second, the Toyota driver Elfyn Evans who by stage 4 was in the lead, while over at M-Sport newcomer Esapekka Lappi matched the pace of Gus Greensmith who slid off the road and missed six stages. Other drivers familiar with their cars had a less happy time. Sebastien Loeb, who like Sebastien Ogier had started the event having been a winner here seven times already but he had a torrid time in his Hyundai selecting his tyres "For sure, it was not my best rally". The rest, as they say, had nothing much to write home about 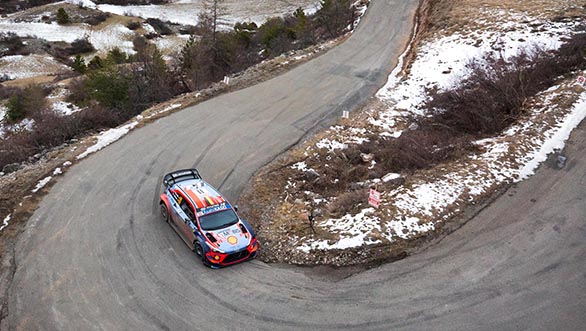 The huge entry of 32 RC2 cars (formerly known as R5) justified the recent splitting up of the categories of these cars with WRC2 for cars entered by teams and WRC3 for privateer teams. Entered in the "Pro" division were two Hyundais (Gryazin and Veiby), two M-Sport cars (Fourmaux and Yates) and the Citroen of Mads Ostberg. With different leaders after the first three stage, Adrien Fourmaux lost three minutes on the second stage and spent the rest of the event climbing back up to finish second in WRC2. For rest of the stages the WRC2 battle was between Ole Christian Veiby and Ostberg. Each punctured but recovered but then with only two stages left to run Veiby damaged his rear suspension and had to retire. Third finisher was Nicolas Gryazin in front of Rhys Yates. Over in WRC3 Citroens scored the top four finishers, Eric Camilli led from start to finish with Nicolas Ciamin's gaining second place on Friday morning and finishing in front of Yoann Bonato and Yohan Rossel. Best finisher in RC3 was Jeremy Caradec (Renault Clio) and Mikael Boisseranc's Fiesta won RC5. Hyundai continue where they left off in Spain 2020, holding a slender two point lead in the Manufacturers' series.

Neuville admitted that he and codriver Nicolas Gilsoul "had an incredible feeling on the last couple of days so we were able to get back the time we lost on Friday (sliding off the road and allowing Evans to retake the lead). The corner where it was full of ice, I had to restart the engine so I lost a bit there. It was more slippery than I expected and I struggled with the tyres. It was a tough weekend for us but I'm happy that we were finally able to do it. I've been chasing this win already since a while. We showed our performance this weekend and its good to start the season like this. We finished the rally with a broken wheel which we did on the second stage (today). We were missing a small part of the rim, but we didn't know why. It wasn't a drama. We wanted to keep three soft tyres so we decided to continue with that rim and it was working fine. It's just a matter of confidence, when you can drive on your rhythm and you know the time was good  you are the man with the control. I was able to go faster than Elfyn and Seb and the car worked very well. Yesterday (Saturday), I was able to find the extra performance to go from 16s down to 12s in the lead." Neuville had one special delight, a new ouvreur. His regular colleague Bruno Thiry was unwell and Dani Sordo took over his work at short notice. "I felt comfortable with my gravel crew, it worked really well since yesterday morning, so I was in full confidence and I could really push very hard." The morning after Monte Carlo Hyundai changed their line-up for the next event, Sweden. Loeb was dropped and replaced by Craig Breen. Every day a surprise at Hyundai.