Ott Tanak won the battle of the punctures at Rallye Deutschland, his fifth WRC win of the year and his hattrick win on this rally. His Toyota team had a puncture-free event, finishing 1-2-3, but Tanak was pressured by Hyundai's Thierry Neuville before a puncture on Saturday afternoon's treacherous Panzerlatte stage dropped him well back. It was Toyota's first 1-2-3 WRC result for 26 years. Team manoeuvres allowed Neuville eventually to finish fourth while similar tactics by Citroen allowed Sebastien Ogier to rise to seventh after struggling all rally with his car and then suffering a puncture. M-Sport were again disadvantaged by Elyn Evans' absence and then by early trouble for Teemu Suninen who later made good times. In the R5 categories, Skoda cars emulated Toyota and also had a 1-2-3 result. 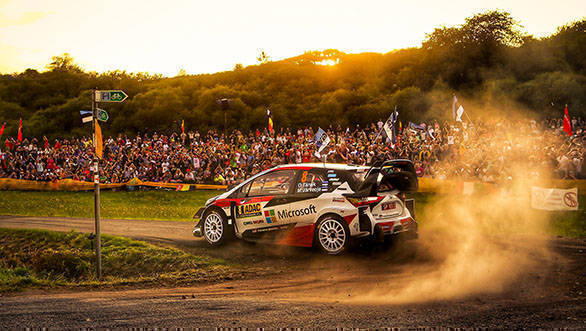 This was the tenth round of the 2019 WRC, after this event there were only four rounds left. If there was any doubt, the story of this year's series is the battle between Toyota and Hyundai, the lack of performance of Citroen and the lack of luck for M-Sport. Any remaining disappointment from Tanak's final stage problem in Sardinia was long gone, apart from a cautious start which allowed Neuville momentarily to take the lead on the Friday morning, Tanak led all the way. For over half the event the greatest gap between Tanak and Neuville was 6.7 seconds and through the event Tanak scored eight best times, Neuville seven. At the end of the rally there was a remarkable, almost Formula 1-like symmetry in the results, Toyota 1-2-3, Hyundai 4-5-6, Citroen 7-8 and M-Sport 9th. 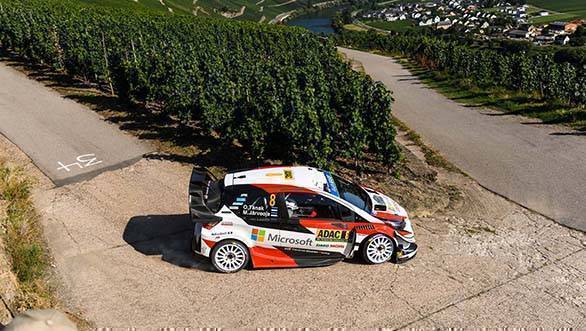 With four rounds left in the 2019 WRC championship, Tanak leads the standings with 205 points, 33 points ahead of nearest rival Thierry Neuville

Whereas Toyota had trouble free runs, Hyundai had a transmission problem for Dani Sordo which happily did not cost him dearly. It was becoming a continuing nightmare story at Citroen, both drivers experiencing understeering problems and other troubles especially Sebastien Ogier, who had no idea how to improve the handling. There was another nightmare at M-Sport when a throttle problem once again stopped Teemu Suninen, on the event where he desperately wanted to restore his esteem after his debacle in Finland. When he restarted he next day he put up impressive times, and then on the Sunday scored second fastest time on the PowerStage. Gus Greensmith, deputising again for Elfyn Evans continued to learn the art of World Rally Car driving, this time on asphalt and finish ninth. Toyota's trainee driver Takamoto Katsuta finished tenth on his first WRC event in a World Rally Car.

Then things got complicated. At Hyundai, Neuville's puncture had dropped him to seventh. He then passed Andreas Mikkelsen into sixth and benefitted from Ogier's puncture rising to fifth. His teammate Dani Sordo was in front of him, so the team manoeuvred and persuaded Sordo to incur voluntary time penalties so that Hyundai's favoured championship challenger could end up fourth. Over at Citroen Ogier's teammate Esapekka Lappi was two places in front of eighth place Ogier, so he was also ordered to incur time penalties. Ogier got what he needed and Hyundai driver Andrea Mikkelsen himself also got a bonus place and two bonus points. The world champion was in despair with his car however, "At least nobody can say we did not try" 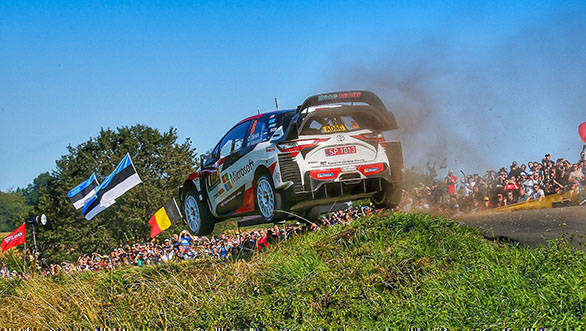 This is Ott Tanak's third consecutive victory at Rally Germany

The traditional route for Rallye Deutschland included the spectacular vineyard stages in the Mosel Valley, then the concrete Panzeplatte military roads on the Baumholder ranges and the closed public road stages in the Saarland region. The broken concrete military roads lived up to their reputation for being unfriendly to the tyres, but happily lacking were the unpredictable weather patterns. It was dry and sunny throughout the event. Unusual format was that the opening stage on Thursday evening was on the same stage as the Shakedown, allowing competitors the chance to practice the stage flat-out several times.

It was really a most historic result for Toyota. Team chief Tommi Makinen: "I have seen similar (results) situations before but never experienced it for myself. I can tell you it is really very very special. All of our three drivers did very very nice driving, no mistakes whatsoever. Everything worked well and no punctures, the tyres, everything. Brilliant". Citroen chief Pierre Budar was realistic. "We still have a lot of homework to do." As for Sordo "Unfortunately we can do nothing about mechanical problems". And finally the winner Ott Tanak had the punchline of them all. "Mixed feelings, let's say. We started to have some issue in the previous stage so I couldn't push there, I just had to drive through. So I am not really happy about this but ok we got to the finish and won the rally so I'm happy". And what was the issue? "Something with the brakes, we have only one brake at the front". 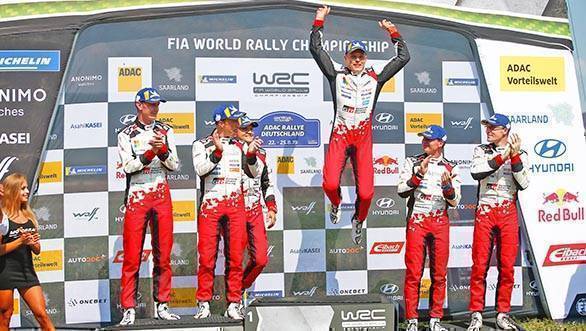 Tanak led a Toyota 1-2-3, with team-mates Kris Meeke and Jari-Matti Latvala finishing second and third at the 2019 Rally Germany

Kalle Rovanpera was in line to win the R5 category but lost time off the road, not once but twice! allowing his Skoda teammate Jan Kopecky to win. Right up to the penultimate stage it seemed but the second R5 car would be the MkII Fiesta of Eric Camilli, but time control penalties (in his case, for the second time on the rally ) dropped him to fifth. The team did not fully explain what happened, but this gave the result to Skoda driver Fabian Kreim, making this a Skoda 1-2-3. At midday Saturday the Citroen of Mads Ostberg was holding third place behind the Skodas but he, like many other R5 drivers, had punctures at Panzerplatte which in his case were caused by broken wheels. He finished seventh R5. Top non Skoda was the Volkswagen Polo GTI of Kajetan Kajetanowicz. Apart from the VW all six R5 finishers were second-generation R5 cars. All four WRC2 Pro cars which started the event finished in the top seven, the top WRC2 Amateur finishers were the VW dealer cars of Fabian Kreim and Marijan Griebel.