After tight competition in the first two days, Ott Tanak went on to win his second successive WRC round in Germany and the first asphalt event win for the current Toyota's team. Despite an otherwise lacklustre event at Rallye Deutschland, eventual second placed Thierry Neuville moved two points further ahead of Sebastien Ogier in the FIA World Rally Drivers Championship. A late-event retirement sidelined third placed Jari-Matti Latvala but this was taken by his Toyota teammate Esapekka Lappi. Like in Finland it was another good rally for Toyota and Hyundai, and disappointment for M-Sport and Citroen. There was a remarkable fourth WRC2 win this year for Jan Kopecky who fought back after a puncture dropped him to eighth in the category which puts the Czech driver in the lead of the WRC2 series. There was a superb supporting drive by his Skoda teammate Kalle Rovanpera who finished second. 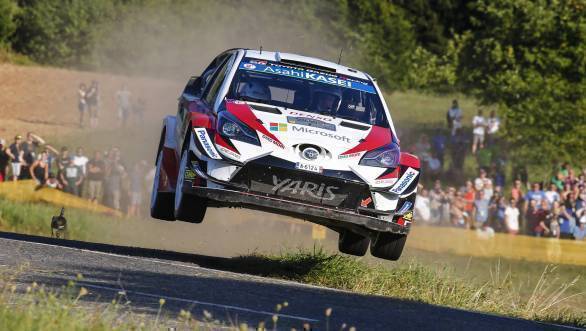 Asphalt rallying brings out the best in some and the worst in others. After the performance of the Toyota cars with their newly upgraded engines on the previous rally, in Finland, the Finnish based Toyota Gazoo Racing team came to Germany still lacking a win on asphalt, though their driver Ott Tanak had won this event last year in a Ford, and all three team drivers had brand new cars for this event. The fastest driver on the event was Tanak whose six stage wins all came in the first 24 hours of the rally, based in the Mosel Valley vineyard hillsides. When the rally moved on the second day to the Baumholder military stages he kept his lead, though his stage times were beaten on occasions by both teammates Jari-Matti Latvala and Esapekka Lappi, by Hyundai's Thierry Neuville and by Citroen's Craig Breen. Sebastien Ogier was close behind but dropped back with a puncture Tanak was nearly three-quarters of a minute in the lead from Sordo and could ease his speed. Dani Sordo was going well, engaged in a fierce battle for his second place with Latvala and Neuville, the latter suffering handling discontent till then. With Toyota and Hyundai alternating the positions at the top of the results, by Saturday evening M-Sport and Citroen were visibly second-best. The third Hyundai driver Andreas Mikkelsen however was struggling all the time but tried changing his driving style to suit the car in these conditions and he consistently held his place ahead of the Citroens. Tanak and the Toyota crew celebrating victory at Rally Germany

After their weekend of delight in Finland, Citroen had slipped right back again. Mads Ostberg had a curious problem which severely limited the power of his engine, which the team admitted was a mistake the team made at service, and he struggled for much of the Saturday in tenth place. Then just when the car seemed to be going better on the Sunday morning he went off the road. Breen climbed up to sixth place on the Saturday afternoon but on the first stage that evening he damaged his suspension and dropped to ninth. Curiously this was at the same place where M-Sport driver Elfyn Evans had wrecked his suspension earlier in the day and was then the only top team driver to run under Rally2 rules on this event. Apart from anxiously encouraging Ogier this was for Ford a rally they will want to forget. On the first day Evans had been going well but his lost stages ended any chance of a good result. All the time the team, focussed attention on their third driver, Teemu Suninen, on his first asphalt WRC event. By the end of the event he rose up to fifth place. 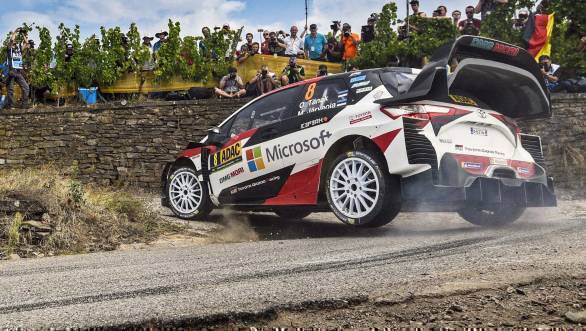 Apart from the apparent ease with which Tanak was able to hold on to his lead in the second half of the rally, the competition behind him down the field had been tight. The reliability of the cars on this event meant that any error or problem was much more difficult to redeem than usual, and this was especially true in WRC2. The championship chances in this series were clear cut. Skoda planned 2018 to be a battle between their drivers Pontus Tidemand and Jan Kopecky. The programme for each driver had been chosen so the two would not have to fight against each other during the season. Before the event, Tidemand had won three events and finished second, once. Kopcky had won three times, this was his fourth start. All was going well for Kopecky until he punctured on the Saturday morning and suddenly he dropped to ninth. He was battling incredibly strong opposition, supported only by his teammate Kalle Rovanpera. Although he was now just 70 seconds behind the new leader, Eric Camilli, it was going to be a difficult recovery process. It looked like his championship hopes were gone. From then on he was fastest in WRC2 on every stage and with two stages to run he was unbelievably back in the lead again with Rovanpera second. It was a mighty achievement. 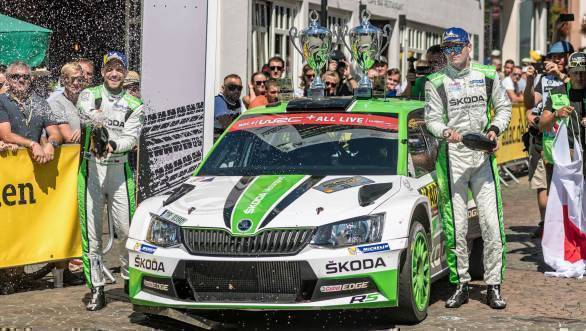 Skoda's challenge came also from their privateers Fabio Andolfi (3rd) and Lucasz Pieniazek (6th). M-Sport ran cars for Eric Camilli, who retired with alternator failure on a road section, and Gus Greensmith who lost time with driveshaft failure and then retired with radiator trouble. Independent team Fiestas included Fabian Kreim (4th) and Kajetan Kajetanowicz (5th). The Citroens were headed by Stephane Lefebvre who struggled with a puncture and the a broken wheel which damaged the suspension, finishing 8th, Yoann Bonauto lost stages after a puncture after lying 2nd in WRC2 and Simone Tempestini (6th) a series of punctures. In Hyundais there were Pierre-Louis Loubet who retired with suspension damage early on, Nicolas Ciamin (7th) penalised for twice overshooting the same complicated junction and Jari Huttunen (12th) who lost stages with an alternator belt problem.

In the Championship standings M-Sport slipped back to third as Hyundai's lead in the Manufacturers' series was cut to 13 ahead of Toyota. Neuville continued to lead the Drivers' series from Ogier. In WRC2 Kopecky had taken the lead over his Skoda teammate Pontus Tidemand while in WRC3 the non scoring Jean-Baptiste Franceschi maintains his lead now over Taisko Lario, who took top points.

Ott Tanak said "We are still far away in the Drivers' championship but it is nice to win in Finland and here. Obviously this one was very very tough. I must say Seb (Ogier) had been pushing so hard (before his puncture) but we did our best and we came out as winners so we can't complain. This my fifth WRC win, matching fellow Estonian Markko Martin's record. He has always been pushing me to do better than he did, so I guess we still have some rallies to win."