Ten years after his first WRC appearance, here at Rally Mexico, world champion Sebastien Ogier performed catch-up miracles to overcome his initial disadvantageous running position, jumping in seven stages from sixth into the lead. Veteran Sebastien Loeb made his long awaited return to the WRC, impressively leading overall for three stages in mid event before he punctured, eventually finishing fifth. As the event progressed Ogier held off challenges from both Kris Meeke and Dani Sordo, Meeke surviving a rally full of little errors to finish third while the Spaniard gained his twenty-fifth second place on a WRC Rally. The event started as a battle between Hyundai and Toyota, when the rally settled down Ogier helped M-Sport forget earlier problems while Toyota ended a horrendous event with Ott Tanak's spectacular win on the Power Stage. WRC2 was won by reigning champion Pontus Tidemand who scored his eleventh successive WRC2 podium result in his Skoda Fabia R2 while the old normally aspirated Fiesta R2 of British privateer Tom Williams provisionally won the WRC3 category.

The return of the 44 years old nine times world rally champion Sebastien Loeb brought a special dimension to the third round of the WRC. This was not only for the curious way in which management had disrupted Citroen Racing's championship plans by running Loeb on an occasional basis but curiosity as to what extent his lost three years from the series would have dented his abilities. Predictions were everywhere, there were so many aspects to consider. Only one driver (Pentti Airikkala) had won a WRC event outside Africa at a greater age. How would stage-rusty Loeb fare against his old irritating rival Sebastien Ogier, who since Loeb left the WRC had risen to the peak of his career? Would Loeb still have the skills as well as the opportunities while retaining the element of champion's luck which had faithfully served him? In Loeb's favour was the advantage of an initial favourable starting position. Halfway through the Saturday none of the top positions were held by drivers who had run on the Friday in the top six positions. Bursting back into the scene was Loeb's old nemesis, Mr Ogier who meanwhile had started catching up. Going into the Saturday afternoon, Loeb led the Hyundai driver Dani Sordo by 2.9 seconds who with Kris Meeke and Sebastien Ogier were all bunched within a quarter minute or so. Then the pressure burst. Loeb and Sordo both punctured. Loeb having to change the offending wheel and dropped down to fifth place. Sordo ran on the flat tyre, dropping behind Meeke. Ogier was suddenly leading, Loeb's Citroen teammate Kris Meeke was second. Meeke then threw away his second place going off the road. It was back to WRC normal. 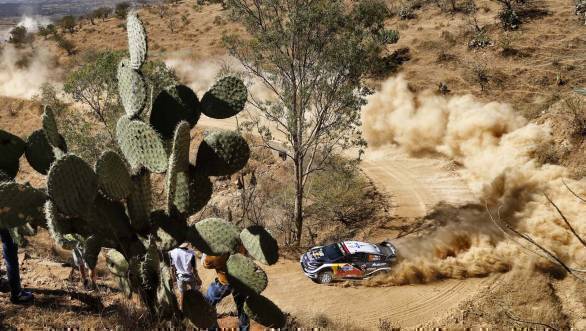 Sebastien Ogier on his way to victory at Rally Mexico

While Loeb had been leading and Meeke was third, we were seeing a dramatic revival in fortunes for Citroen even without their currently top standing driver, the absent Craig Breen. Once again the Hyundai team were the roundly strongest team. Their part timer driver Dani Sordo had led nearly all Friday, but championship leader Thierry Neuville was uncomfortable in the challenge of opening the roads and Mikkelsen's pace was not dazzling. All three cars in the top six at half way however was impressive. In less happy mood was M-Sport, waiting for the usual late rally magic from Sebastien Ogier to be delivered but the two-car-score rule was against them. Elfyn Evans was out after an impact with a road side bank had caused concussion for his codriver Daniel Barrett. His car was withdrawn. Third M-Sport driver Teemu Suninen took the start without any pre-event testing and stopped in the Friday afternoon with damaged suspension and then hit a barrier. But while Ogier kept M-Sport's hopes alive, Toyota Gazoo were having a traumatic time. All their cars suffered a recurrence of last year's engine overhearing problem, and before half distance all three of their cars had been relegated into Rally2. Highest placed car was Jari-Matti Latvala's but he missed stages because of alternator failure, then missing more stages was Esapekka Lappi a novice to this event who had slid off the road and his car was on its side down an embankment. Ott Tanak was lying third on the Friday stages when his turbocharger failed and missed most of Saturday. 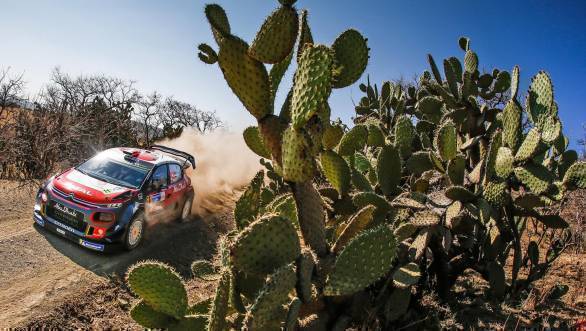 While Skoda continued their calculated driver-rotational challenge for WRC2 honours with entries for Pontus Tidemand and on his first ever official works entry for the 17 years old Kalle Rovanpera, Hyundai were represented by their trainee driver Jari Huttunen. M-Sport's main R5 challenger was prize driver Nil Solans and they supported various private drivers. The top most important Mexican entries were former PCWRC champion Benito Guerra (Skoda) and reigning FIA Nacam champion Ricardo Trivino (Citroen) but Guerra's car was destroyed by fire at the support championship official pre-event test day. Already on the first stage of Friday Rovanpera had stopped after damaging his radiator and Solans also had radiator damage which led to electrical problems. Tidemand soon increased his lead to over three minutes while Huttunen had radiator issues and stopped on the first stage of the Friday afternoon and 19 years old Bolivian Marco Bulacia struggled, battling against engine overheating. Both Huttunen (leaking fuel tank) and Solans (suspension damage) stopped again on Day 2 but both were still up for championship points in sixth and seventh (last) positions. Tom Williams was the sole WRC3 competitor. He missed stages on Day 1 with electrical problems these reoccurred on the final day and although he reached the end of the rally he was unable to make it to the finish so 25 WRC3 points were lost. 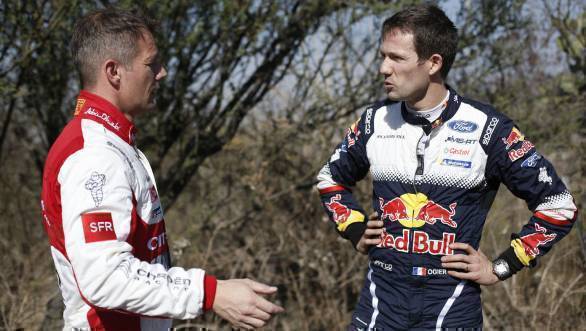 Hyundai retained their lead in the Manufacturers' series by 12 points now over M-Sport, with Citroen just one point behind, and Toyota now fourth. In the Drivers' series Ogier was back in the lead, ahead of Neuville. In WRC2 Tidemand now led the series by 18 points from non competiting rivals Jan Kopecky and Takamoto Katsuta. WRC3 point remained unchanged with Enrico Brazzoli and Dennis Radstrom joint leaders.