"I never believed I would win a rally again!" said 44-year old Sebastien Loeb. One year after their last WRC win, Citroen's victory at mixed-surfaced Rally Catalunya was their 99th win since the series started, 79 wins having been in Loeb's hands, and six years since he last entered this event. It was Loeb's ninth successive win on this rally. 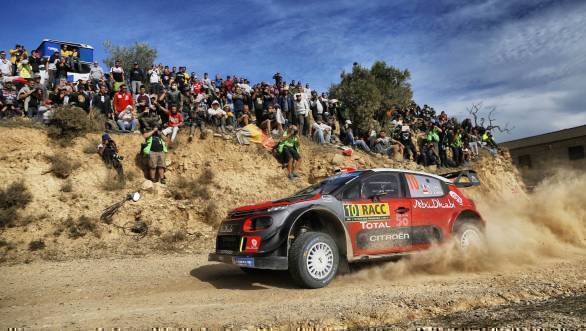 Changeable weather created endless tyre choice errors, led to very close competition and constant changes in results with seven different drivers winning stages. Ott Tanak led until he punctured, Latvala also led but punctured twice. The stakes for the two main championships are getting closer, Toyota's 20 point lead over Hyundai has dropped to twelve, while Neuville who had a seven-point Drivers' lead has been overtaken by Ogier who is now three points in front. Kalle Rovanpera beat the newly crowned WRC2 champion Jan Kopecky to win the category while Petter Solberg was third in the new VW Polo GTI R5. Italian driver Enrico Brazzoli clinched the WRC3 title by one point after defeating fellow Peugeot 208 R2 driver Taisko Lario who was penalised for a navigational error. 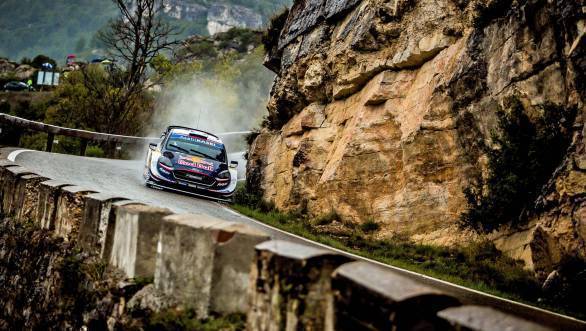 Sebastien Ogier moved to the top of the championship standings once again, leading Thierry Neuville by three points

It started off as a curious event in which old-timer drivers created a lot of interest. The four-years-absent Ken Block was back again, six-years-absent 2003 World Rally Champion Petter Solberg was a guest driver in Volkswagen's new R5 car and competed against his famous rallying brother Henning. Sebastien Loeb had not entered this WRC event since 2012 but nobody expected him to extend his unbroken run of eight victories on this event.

Almost as a double billing there were the intense battles for this year's world rally titles. In the Drivers' series Thierry Neuville was hoping to extend his slender lead while his Hyundai team were aiming to reduce Toyota's lead in the Manufacturers. It was not to be a good rally for Hyundai but noting the event's wildly oscillating fortunes, often created by fast changing weather conditions, they kept hopes alive till the end. In the end Hyundai led the rally for only one stage, in the hands of their Spanish driver Dani Sordo. Neuville himself paid no attention to a roll at shakedown, considered simply a normal inconvenience and struggled driving first on the road on Friday's gravel stages. He lost time in very slippery conditions on Saturday afternoon and it took Neuville some time to get up to speed and struggle to finish fourth and finish behind Ogier in the title race. Third team driver Andreas Mikkelsen was never in the hunt at all.

Once again Toyota started off impressively only to deceive. Ott Tanak and Jari-Matti Latvala were the fastest drivers on the event but each had punctures which set them well back in this unusually closely fought event. Latvala fought back hard, rising from tenth to first in six stages, helped by the knowledge that Michelin's special reserve tyre, to be used only in very wet tarmac conditions, would be effective. Most other drivers had no experience of these tyres and were nervous of trying them out. They proved they were very effective in really wet tarmac. On the penultimate stage Latvala had a second puncture and having now fallen to sixth, he was again given a major team role to play, artificially driving slowly on the Power Stage to allow his team-mates Tanak and Lappi to slip ahead in the classification. Graciously he agreed. 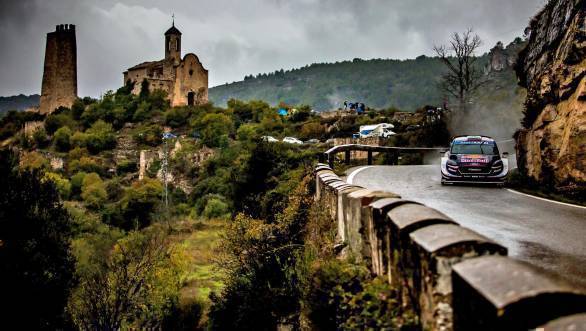 Over at M-Sport, the euphoria of winning Rally GB continued and Ogier went into an early lead but then he struggled running second on the road on Friday's gravel stages but in the swings and roundabouts of fortunes in the rain on Saturday he climbed up to second. The battle for the lead on the final day between old adversaries Ogier and Loeb promised to be intense. In the end Loeb, after an almost faultless drive won the rally less than three seconds ahead. Elfyn Evans hung on to the early leaders impressively and ended up securing a superb third place while Teemu Suninen learned a lot about Spanish special stages and WRC car asphalt rallying to finish 11th. Fiesta WRC driver Ken Block went home after going off the road.

General consensus did not expect too much from Sebastien Loeb on only his third WRC event of the year and Loeb himself did not promise a wondrous performance. Gradually he reignited his former rallying talents, coming alight on the final day when alone of the top drivers he chose hard compound tyres believing the wet roads would very soon dry out, which they did. Magic! Loeb led all the way through the final day pursued firstly by Latvala then on the last two stages by Ogier. He even showed he still possessed his athletic skills by performing his signature gymnastic back flip in front of his team. Citroen also entered Craig Breen who had a wretched event punctuated by some highly frightening high speed spins and finished ninth while the team's sponsor Sheikh Khalid Al Qassimi drove their third car. 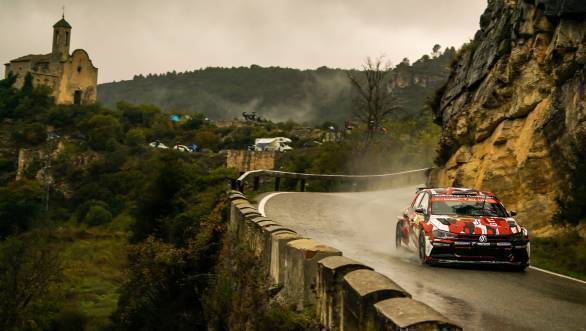 The WRC2 battle saw a dramatic effort by the new Volkswagen Polo GTI R5 entered in the hands of Eric Camilli and Petter Solberg, on a curious single outing as an official company entry. Camilli led through Friday's gravel stages before suffering gear linkage trouble. Skoda driver Kalle Rovanpera then took over and led all the way to the end, finishing 8.5 seconds ahead of his team-mate, new WRC2 champion Jan Kopecky, while Petter finished third in the category. The WRC3 category was decided dramatically. After leading the category through Friday, Peugeot 208 R2 driver Taisko Lario failed to record his arrival at a Passage Control that evening, incurring a penalty of ten minutes. This dropped him behind his rival Peugeot driver Enrico Brazzoli and who unexpectedly went into an unbeatable lead in the championship.

One WRC event remains this year, when Rally Australia starts in three weeks' time. With both the Drivers' and the Manufacturers' championships still waiting to be decided, interest in the WRC will continue until the end of the season. Coming soon is expected a raft of more driver announcements.