The Belgian Hyundai driver Thierry Neuville made up for last year in Sweden! This time he did not throw victory away but led the Swedish Rally safely almost from the start on an event which featured most extreme challenges. The chief loser was Sebastien Ogier whose course opening stresses took on unprecedented proportions when deep snow disturbed by historic rally car drivers had run on the stages between the WRC event and smothered the stages. Toyota driver Ott Tanak had been the fastest driver on the event but the snow chaos and then a delay after a collision with Citroen's Kris Meeke meant he only finished ninth. Toyota (who enjoyed legitimate and privileged pre-rally testing advantages) and Hyundai were the teams to beat, Citroen's continued agonies were salved with a superb run by Craig Breen while nothing went right for Ogier's team M-Sport. New specification winter tyres from Pirelli helped the Japanese Fiesta R5 driver Takamoto Katsuta head the Michelin-shod works Fabias of Pontus Tidemand and Ole Christian Veiby in WRC2, Dennis Radstrom won the Junior and WRC3 driver category, the only important placing by a Swedish driver. In an event dominated by visiting drivers, top placed Swedish driver in the overall placings was Tidemand who finished thirteenth overall. 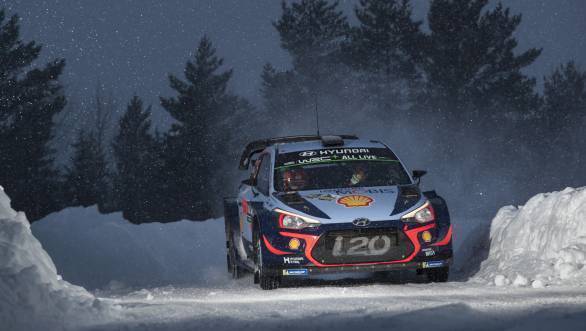 What a rally to remember. These days the traditional complaint on the Swedish Rally is a lack of snow, but not this year when snow fell in full measure. This developed into a quite unprecedented situation. Consider the World Champion Sebastien Ogier who never left the road and had no technical trouble but was 2m48s behind the leader at the end of Day 1. Conditions changed fast and late runners missed the full horrors of the trouble but all front running drivers reported similar though less dramatic situations. None of the first four drivers seeded to start the first day running first cars on the road finished in the top six! Such was the knock-on effect for a good result on the preceding round at Monte Carlo. Hyundai seem to be the most coordinated team at the moment. This time Hayden Paddon (second here two years ago) drove the team's third entry instead of Dani Sordo and the team ended up with an impressive 1-3-5 result with Mikkelsen third and Paddon fifth after a poor score in Monte Carlo. Much was expected from Toyota after Monte Carlo when they came within a whisper of a 2-3-4 result. They left their driver line-up unchanged. They were however affected by Ott Tanak's snow-related problems and then also suffered from Jari-Matti Latvala's transmission troubles but third driver Esapekka Lappi pressed hard as he consolidated his second place which he held for half the event and ended up winning two stages. Tanak eventually finish ninth overall. 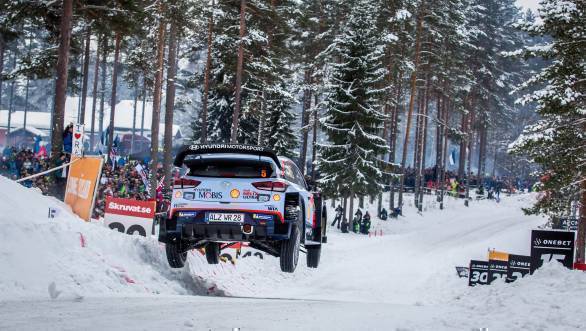 There had been surprise when Citroen announced an extra part-time driver in their 2018 line up and they brought the highly experienced Mads Ostberg to the rally. Although Ostberg had spent two seasons driving the DS3 WRC he was new to the C3 WRC, only having a half day in which to become acclimatised to the car  and learn how to react to its mercurial temperament. Until he had to run with setups he had no chance previously to test and it all went wrong, it was a most impressive debut. He was actually lying second overall after the second stage. He had been lying fifth for half the rally but as he struggled with the handing he could not resist the pressure from Toyota's Lappi and he finished sixth. Craig Breen meanwhile was brilliant, winning more stages than anyone except Tanak and Neuville and by early Saturday had climbed up to second, himself putting pressure on Neuville. Kris Meeke's entry was withdrawn at the finish to circumvent the component link rules and give his car newer parts for the next event.

About M-Sport, what is to say? Like the way that Toyota suffered from Tanak's misfortunes, M-Sport suffered a lot more from the troubles of Ogier. On this event M-Sport enlisted Teemu Suninen as their number three driver. It was only Suninen's third event in a WRC car yet he was the top lying M-Sport team driver from stage two to the finish. Wow! Elfyn Evans was slowed by a puncture on the first morning and the Wales Rally GB winner was never in the top ten places until the final stage and scored no stage times in the top six. It had been over a year since an M-Sport driver was not standing on a WRC podium. At the end of the rally M-Sport helped Ogier gain better conditions for the PowerStage by a complex system of optimising his championship points by delaying entry into the PowerStage control. This elevated him eventually to tenth in front Evans, who was ordered to drop back by incurring penalties as well. 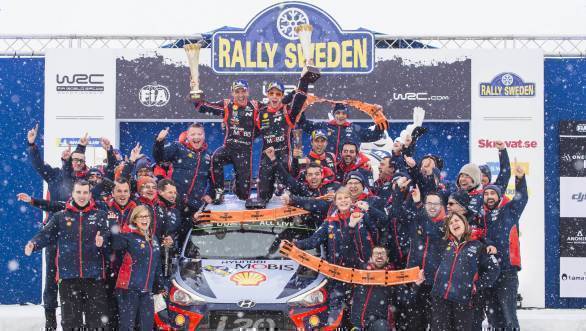 What was the reason for the snow problem? Snowy conditions can cause difficulties in countless ways. Hard packed snow when hardened over a short period of time can quickly breakup under the heavily studded rally car tyres and expose frozen gravel. Feathery snow can blow away. Snow dust causes visibility problems. Snow takes countless different forms all depending on climatic circumstances. Rally organisers help by having the stages snow-ploughed but the lines taken by the plough can vary and will frequently stray wildly from the line of the road in summer time. On this occasion the problem first originated by the abundance of snow, secondly by the passage on many stages of the 64 Historic car rally competitors between the first and second passage of the WRC event. The lines taken by the historic cars not following the lines of the WRC drivers and their tracks, in the snow vary because of the widely varying size of the cars and width of their tyres. Added to this sudden heavy snowfalls and accumulation of new snow which had settled on the snow banks had blown on the road. The suddenness of the situation prevented snow ploughs from clearing a new line. Not straightforward!

Beyond the excitement of the WRC the big interest was in WRC2 in which the fight between Ford and Skoda was increased by the increasing activity of Hyundai. On this occasion Ford were represented by the Tommi Makinen Racing team of Japanese drivers Takamoto Katsuta and Hiroki Arai, sponsored by Toyota (!) whose cars ran on the new Pirelli winter tyres, while Skoda's selected drivers on this event were Pontus Tidemand and Ole Christian Veiby. The performance of Katsuta was a revelation. There was a healthy size of entry for the opening round of the WRC Junior championship combined with the WRC3 support series were both won by Dennis Radstrom from Emil Berkvist.

What a difference one rally can make for M-Sport and Hyundai. From leading both the Manufacturers and the Drivers' series after Monte Carlo, M-Sport were now bottom in the Manufacturers' standings while Hyundai were top, and Neuville was leading Ogier in the Drivers' series by 10 points. In the support categories both WRC2 and WRC3 had joint leaders, Kopecky and Katsuta, and Brazzoli and Radstrom respectively, though Radstrom held the sole lead in Junior series.