So near yet so far. 28 year old Elfyn Evans led Rally Argentina from the second stage to the penultimate stage, only for his first WRC win to be denied on the final stage by Thierry Neuville  by a margin of 0.7 seconds, the third closest margin in WRC history. Halfway through the event, Evans had a lead of a minute but circumstances intervened and the lead was eroded to just 0.6 seconds before the final stage. Neuville gave Hyundai a second WRC win of the season, despite troubles for all their team on the first morning. M-Sport finished a remarkable 2nd, 3rd and 4th with fourth placed Ogier NOT being a points scorer. Toyota struggled and Citroen had a momentous disaster, essentially created by two major crashes for their number one driver Kris Meeke. Skoda driver Pontus Tidemand scored his third WRC2 win of the season. This event will long be remembered for Evans' majestic performance, initiated by a favourable good starting position and DMack tyres which have always performed well on this event, then impressively by the way he maturely held that advantage almost till the end. The event was quite the roughest event of the season so far and its small entry highlighted the challenges of running long haul championship rallies. 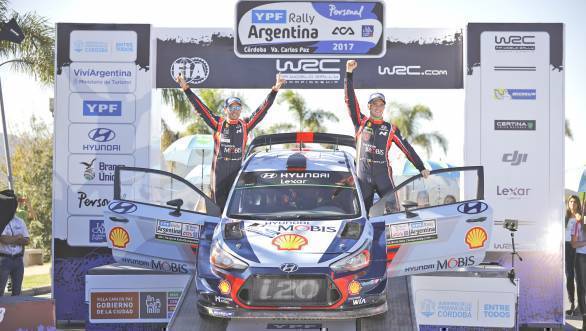 New conditions, different circumstances, new things were happening in Argentina. Things which affected the teams were that testing in the country was, again, forbidden, this was gong to be the toughest event for the 2017 cars so far, so the aerodynamical bodywork was going to be hard pressed to keep stable handling characteristics when they were damaged. The conditions were expected to favour soft compound tyres which were used almost exclusively on the event and especially DMack tyres which traditionally have gone well here in the past. And of course, the first day running order was going to challenge the drivers which had gained valuable points earlier in the season if, as expected, the conditions were going to be dry. None of these factors fully prepared for the impact of the performance on the Friday of the DMack driver Elfyn Evans which was outstanding. He came within am ace of winning his first WRC event. 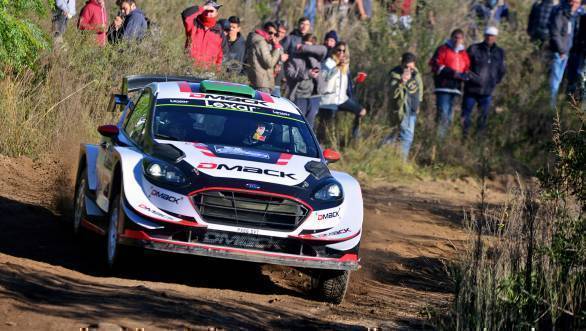 Elfyn Evans led the Rally of Argentina from the second stage to the penultimate stage, but was denied his first WRC win

There were no fewer than five 2017 Fiesta World Rally Cars competing on the event, the three official entries and the private cars of the OneBetJipocar and the Bertelli teams. Ostberg progressively moulded his driving into a competitive style until the rear diffuser detached itself and the driver slid wide and damaged the suspension. One stage was missed but Ostberg still scored Driver championship points. Evans was the star of the official team, but was delayed by a puncture and also rear suspension problems. Why was it that Evans finally lost his win? Was it his brake pads glazing on the final day, delays after clipping the bridge on final stage or what. Who knows. Sebastien Ogier was far from happy. On top off his early running order handicap, he had steering and the rear suspension problems. Ott Tanak had no real problems apart from a puncture and some spins and towards the end of the rally was seriously challenging Evans and Neuville. On Friday evening, four M-Sport cars were in the top five, interrupted only by Neuville's Hyundai, with Ostberg lying second overall. Strange to see that Ogier was the one team driver who did not score Manufacturer points! 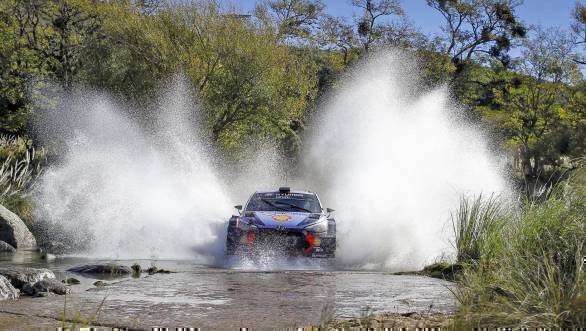 Hyundai had a variety of problems, especially on the first day of the event, not helped when Hayden Paddon rolled and Neuville had damper failure and Dani Sordo had damaged steering which he had to repair in the middle of a stage. Both the Toyotas had troubles. Jari-Matti Latvala had a strange first day problem with the engine lapsing into safe mode while teammate Juho Hanninen had problems all through the rally with a loss of turbo pressure. Citroen however had what can best be described as a rally from hell. Kris Meeke lost control of his car on a compression, like in Mexico, but this time causing considerable damage. Then the team set about and repaired the damage (leaving Kris to say his mechanics were the best in the world!)  and then the next day heavily crashed the car again. This caused considerable logistical problems for the team, the upset of which was the team voluntarily withdrew Craig Breen's entry at the end of the event, to escape the regulatory component linking rules and enable new parts to be fitted on the next events for their cars. It was a dramatic act, leading the team to forfeit championship points from Breen's performance.

The WRC2 entry comprised five Skoda Fabias and one Ford Fiesta. Skoda Motorsport was spreading the championship scoring options round their team drivers, so Andreas Mikkelsen had now won two events out of two and Pontus Tidemand had won three out of three. On the next event, all championship drivers must compete so the Skoda drivers meet for the first time. Tidemand won the category by over ten minutes from Juan Alonso. The sole Fiesta driver, Pedro Heller, did not finish. There was one WRC Trophy starter, but Valeriy Gorban did not finish. 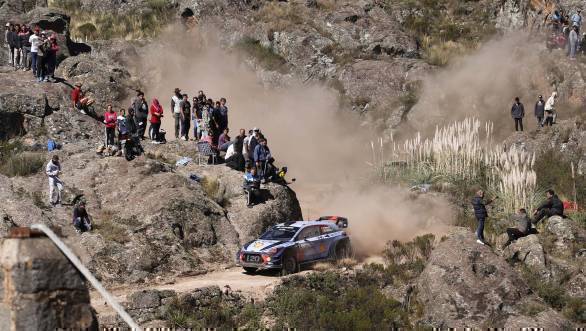 Neuville is now third in the 2017 WRC driver's championship standings

Hyundai's win had shaved M-Sport lead in the Manufacturers' series by two points, to 22, with the gap over Toyota in third place increased. With both Citroen cars non finishing this event the team were now 26 points adrift at the foot of the Manufacturer standings. Ogier's lead in the Drivers series was now 16 points still ahead of Latvala but with Neuville now just two points behind in third with all three M-Sport drivers now in the top six. With none of the other leading drivers in WRC2 present Tidemand's third win in the category sees him lead the series by 25 points.

This may have been the smallest full word championship rally in history, but it was one of the most eventful. It was just a pity that events in places as enticing as Mexico, Argentina and Australia do not attract the entries they deserve, but that's another story!